Bruce and I had dinner with Steve and Jacquie on New Year's Eve. The dinner was a bit too good, as was the Champagne Punch. Jacquie and I nearly finished two bottles before we left. Our next stop was the boat. We had planned to go to the BYC party... but I wasn't making it. I crawled into our warm soft v-berth and was out. Bruce did make a short appearance at the club for the 9:00 toast, then joined me. So much for the party animals. 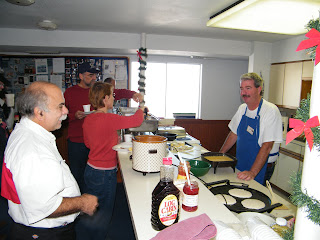 New Year's Day, we were up bright and early. There was a breakfast at the BYC given by the past Commo- dores. 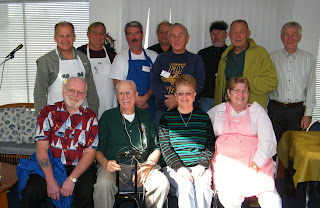 These were the host/hostesses. Yes there have been women Commo- dores... 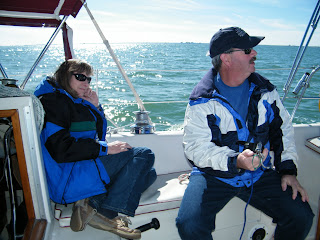 We were there early and visited with some new members and some old. Bruce has been unable to take the boat out as he has been nursing me for nearly two weeks. I felt sorry for him as my surgeon has expressly forbidden me to go sailing... I got a bright idea and rounded him up some crew so that I could be absolutely worthless. 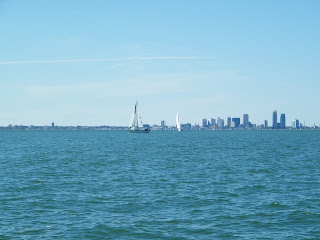 Neil, Teresa and a rival captain, Larry joined us on the bay at noon, after the winds from the arrival of the Norther' blew out somewhat. 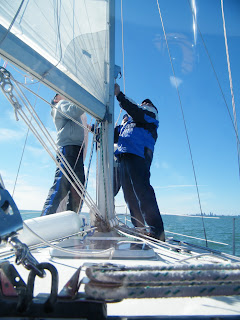 The winds continued to die down and the guys decided to play with Bruce's spinaker. Bruce had been sharing his secrets with Larry the whole afternoon, so what's another out of the bag. Larry doesn't even have a spinaker... So they got to work on it. 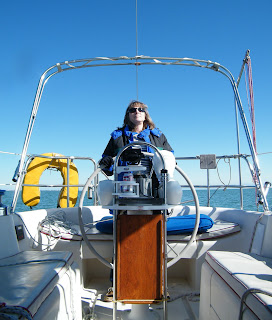 Teresa was on the helm and I was hiding inside as the cold really hurts the schnoz. She was a bit nervous when the sail came up and the boat started to do things... but she did great! After a while, she didn't even accept the offer to be relieved of the helm. 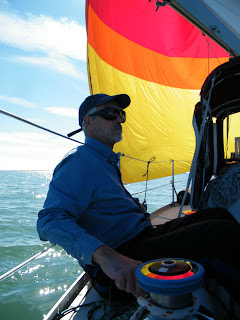 Unfortunately, the winds died off so completely, we ended up taking the sail down and motoring back in. Oh well, it was good practice for the guys and Bruce got a taste... so he was happy. He began this day with no idea he would get out on the Bay at all...

We ended the boat ride early in the afternoon so that we could be on to the next item on our agenda. We had a wedding to attend. The daughter of a long-time co-worker was getting married in a very cute little church uptown CC. The wedding was very pretty with a huge bunch of attendants. Mary, my co-worker, looked lovely as Mother-of-the-Bride. 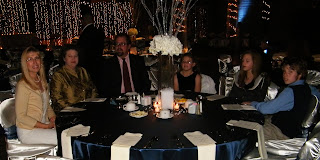 The reception was held at the Ortiz Center near the port. We joined my friend Mimi's family at a table. 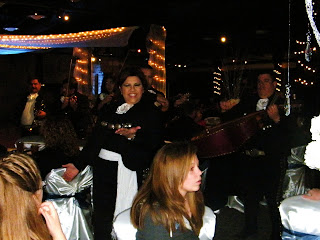 There were Mariachis roaming around through the tables. It was kind of fun and uplifting. I was having a hard time with my nose, however. Bruce and I stayed through the dinner and when the dancing began, we made our exit. I was a bit disappointed about missing all the post-wedding craziness, but it's painful to smile much and figured I'ld pay for it if we stayed. Sorry to Mary for missing the cake and whatever she had in store for our entertainment. I can't wait to hear the stories. And thus ended our first day of 2010