A Saturday Drive to the Aransas National Wildlife Refuge 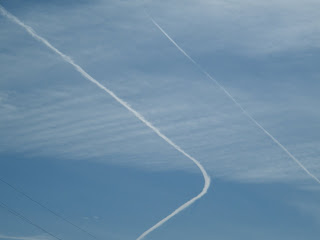 Saturday morning, Bruce read in the paper that the Whooping Cranes had arrived at the Aransas National Wildlife Refuge. We had nothing on our agenda so we decided to take a drive out there and see how lucky we were. It's a good thing to be able to change directions on a whim... 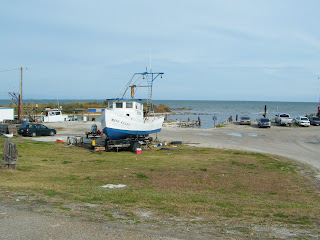 We did a bit of Antiquing on the way and found ourselves getting hungry. We couldn't decide on a place for a snack and by the time we realized it, we were literally in the middle of nowhere. Guess what? There are no restaurants or convenience stores in the middle of nowhere. Now What? We were starving... so we took the first likely looking road at a sign that read Hopper's landing to see what we could find. 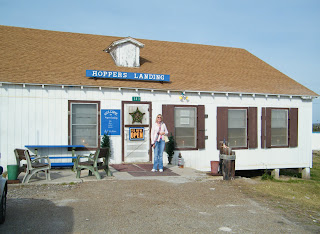 Now this place was really it as far as choices. I was feeling adven- turous, so we went on in. I heard a discussion inside while I waited for this picture to be taken that went something like this.... "whatdaya think she'll want to drink... beer? Nawww... I'm thinking more like wite wiiine." This was a little local bar right up from the "landing" where boats brought in the oyster harvest. 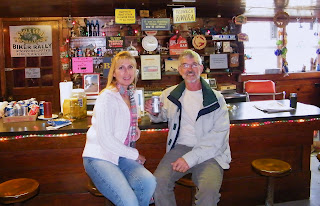 We walked in and looked around. It was like something you would find in the mountains or back woods. Very rustic, with a couple of rough looking guys sitting around drinking and smoking. We walked to the bar and sat down. The surprised looking owner's husband, asked us what we would like. I told him we needed a snack, and he said it would have to be chips or pickles. So we settled on chips and Bruce picked out a beer. They even had a wine cooler for me but they had to make a phone call to the owner... (the wife) to see if the cost was $2 or $2.50... which took a while.
Meanwhile, we chatted with the local guy and found that they had brought in 72 bags of oysters the previous day (which must be good). And that they drag the bottom and cull out the ones under 3 inches, which are illegal. Unfortunately the illegal 2 to 3 inch size are more desirable on the "half-shell market". So the game wardens periodically reduce the day's haul by showing up and making it difficult to get away with bringing in the 2 to 3 inch size, as they make the guys throw back the whole boatload if they possess more than about 20% of the illegal size. Bummer! 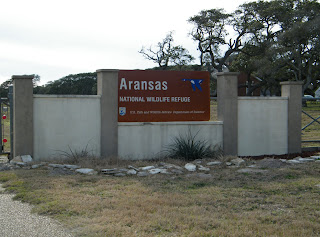 So anyway, now that we know all we need to know about the oyster trade... We said our goodbyes and headed on over to the refuge. http://www.fws.gov/southwest/refuges/texas/aransas
It was about 3;30 and they quit taking people in at 4:30. You can stay until 30 minutes after sundown, however, so we still had plenty of time. We got in free since Bruce has a Golden Pass which gets us into any National Park for life! Perks of marrying an old guy...
Our main objective was to catch a glimpse of the elusive Whooping Crane. 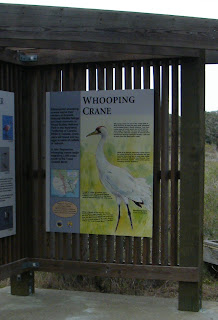 This picture at the park was as good as it got. We don't know if it was because they were hunkered down for the cold weather (although it was much better than it would be where they come from) or if it was the noise being made in the repair of the new skywalk right near the old viewing tower... probably the latter. 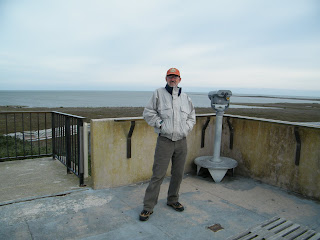 We climbed the walkway up to the old tower, which has a com- manding view of the shoreline. There is a viewing scope up there which gives you a better look at the shore, but it would probably help to bring your own binoculars, which we did not. But there weren't too many people around this day so we got a crack at it. 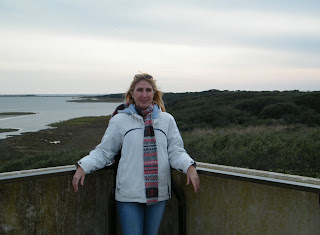 The wind was so cold up there and we weren't able to stay long. The cold was really making my nose hurt and Bruce only had a light jacket. The view was spectacular though... I looked everywhere through the camera lens but found only a few birds. A couple of Egrets were hanging out near here and I got a couple of pictures, but not great ones at this distance. http://en.wikipedia.org/wiki/Egret 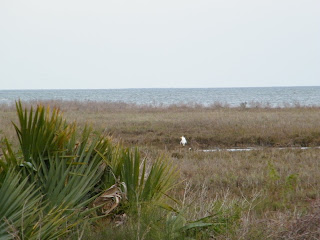 This one was hanging out near the marsh... 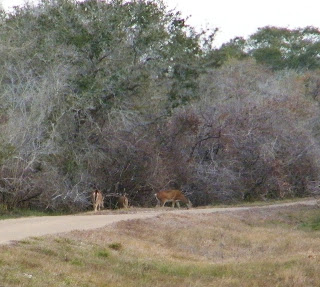 We were driven down from the tower by the cold. We took the car on the loop to see if we could find any other critters along the way out of the park. There were some white tail deer frolicking in the road up ahead. There were two cars in front of us so we couldn't get very close, but we could see them pretty well. 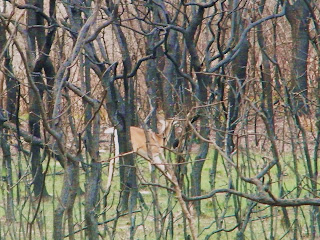 Finally when the cars began to move towards them, the deer scampered off into the brush along the road. We got to watch them flick their tails and jump around in the trees. 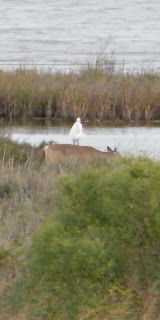 We drove along and found another spot with deer and egrets both. There was a little freshwater pond where the birds had gathered and while we were watching them, this lone deer came walking up for a drink. The bird is not standing on the deer. 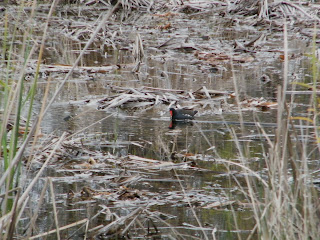 We drove on and just at the exit of the park, there is a marshy spot with a fence and a sign that says not to get on the other side of the fence as alligators bite...! Well I guess there weren't any gators in attendance today as there were a bunch of moorhens hanging around.
http://en.wikipedia.org/wiki/Moorhen 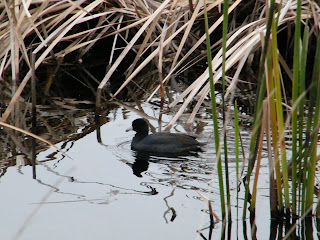 They make the cutest little sounds. It was neat to watch them and to listen to their call in the still day. There were screams from some child off in the marsh... probably found those alligators. The cold drove us on and we left the park with the intention of coming back again soon to try our luck with the Whoopers. We drove home by way of The "Big Fisherman". I swear, this is the last binge before the big diet starts! It was a fun day out with my favorite husband.