I spent 4 hours on Saturday shopping for a dress with my friend Mimi. I must have tried on 30 dresses before I settled on the perfect one. I was so excited to go out all dressed up. It's not so often we get to put on our finery and step out. The occasion was the annual BYC Officer's Installation banquet. 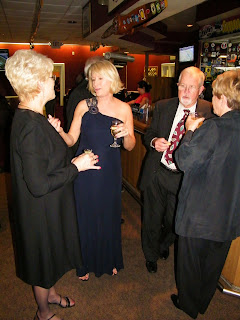 It was held at the Bay Club on the Naval Base. We arrived just in time to meet friends for the mixer in the bar. Let me tell you, that bartender was not stingy with the rum! 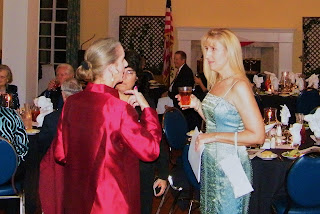 We moved on to the banquet room where there was more mixing and chatting. I got to talk with some others who will be going with us on the upcoming "Hijack the Jack's Cruise" in 28 days. As you can imagine, we're all very excited about getting out of the cold for a few days.

Soon, dinner was served. It is the last to be had at the Bay Club. The times are hitting the Navy base in decreased bookings and they can no longer afford to maintain the staff. I don't know what this will do for future Navy Day Regattas... 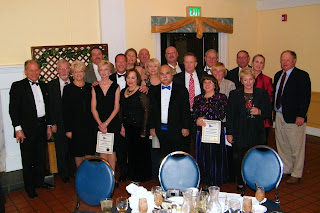 After dinner, our departing Commo- dore, Walt, took the podium for a very long list of presen- tations. I think half the club's membership got some kind of award or honor. They recognized all of the outgoing officers and committee chairs. There was a near epic poem written and presented by one of our members chronicling the year's events. It was simply done but an amazing accomplishment.
This was the last hurrah of the outgoing committee chairs... 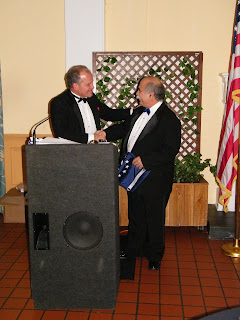 Walt swore in our new Commodore, Harry, who then took over the podium. 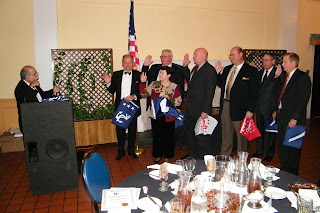 Harry swore in his new group of officers first. All very hard- working people who make our club a success! 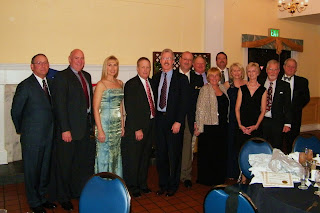 Next on the agenda was recognition of the new Committee Chair people, including myself. I was asked late last year if I would be on the Dinner Committee, to which I agreed. Next thing I knew... I was somehow the Chairwoman. I don't have a clue what that means, but I guess I'll learn. I've got a great group of committee members to help me out. 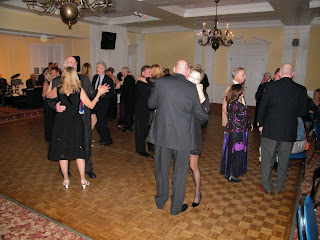 After all of the presen- tations were done, we joined the Padre Island Yacht Club group next door. They had graciously extended an invitation to our club to attend their banquet, which included a very nice band. The didn't play ANY current music... only oldies and more swing, big band, old fart stuff. It was fabulous! We had such a great time dancing the night away. 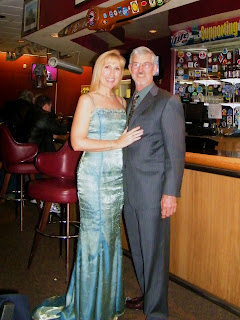 Bruce and I stayed until the lights came on and the band packed it in. We didn't get home until midnight. Uncommon for us. It was a wonderful kickoff to our year and we're both very excited about the upcoming events.

Sunday morning was lazy with brunch with some club members at Water Street Seafood Company. They have a generous and delicious brunch buffet for $16.95. For another $10 I got a bottomless Mimosa. Yum! Of course we felt obliged to gorge ourselves. I was so hungry by the time 10 am came along, that I had the shakes. These were quickly replaced by the need to take a nap. We went to the boat and slept for a couple of hours then it was over to the club for our planning meeting.

We spent a couple of hours there mapping out our year. It's going to be a great one. We're so glad we have the luxury of spending our weekend frivolously.