Now I'm not normally excited about February... but this year is different. We, along with 22 of our closest friends... are going on a Cruise. We drove up to Galveston and stayed the night in a very nice Holiday Inn Express on the Sea Wall. We were up before the sun as usual. 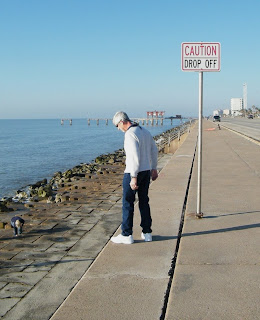 We had a quick breakfast at the hotel, then walked along the sea wall while the rest of our group got their act together. We had to be out earlier than I had expected and didn't really get to explore Galveston. 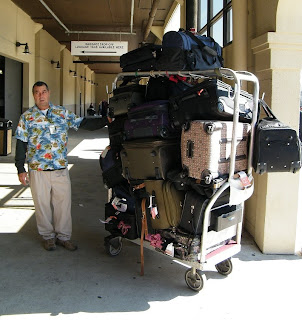 One of our group works for Customs and Border Patrol. We caught the hotel shuttle to the ship and dumped our baggage on this poor guy. Then one of Chip's fellow Customs officers sent a security guard to collect us and whisk us through all the formalities with no lines. We walked along behind him and I wondered if people thought we were some kind of criminals. Probably not, as we were in such high spirits... no way we were going to jail! 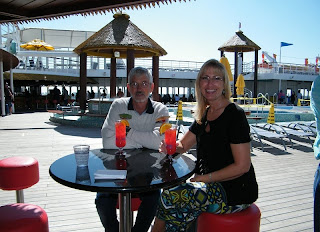 The Carnival line had this stuff down to a science. I would imagine that even without the special escort, we wouldn't have had to wait too long. It's a pretty impressive system. We boarded the boat and congregated on the Lido deck to wait for our rooms to be ready. We got started with the "Drink of the Day" which was a nice rum punch. Another cruise came in this morning and they were turning the rooms over. It's really amazing how these people do it. 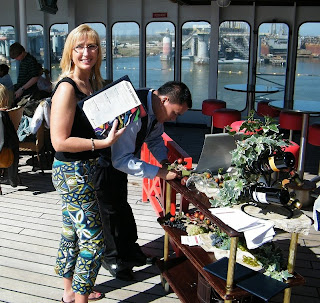 We picked out a dinner wine package from the wine steward. The liquor prices weren't as bad as I thought they would be. We saved a few bucks by buying 3 bottles for the week. We were done with lunch and a couple of drinks just in time to take possession of our room. Empress deck 126, right near the mid-ship elevator. We were pleasantly surprised with the size and layout of the room. We were doubly happy with our window, as some had told us it would be a mere porthole. 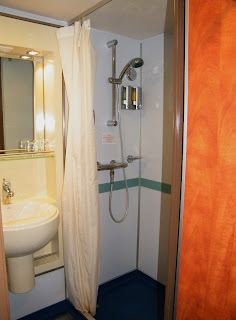 We even had a good sized bathroom with a full stand up shower. We were impressed throughout the week with the service on this ship. Our room was cleaned at least twice daily with new fresh towels, floor mats, beach towels. We had fluffy white terry robes for each of us. They even dried out our sink and shower after we used them. I had worried that the boat would be dirty! No Way!!! 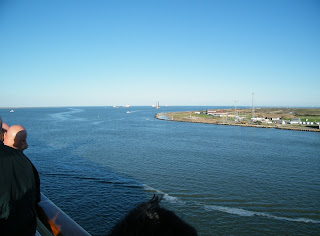 We settled in and unpacked then joined our bunch up on the top deck for our departure. It was a spectacular view from the top of the Galveston jetties and coast. 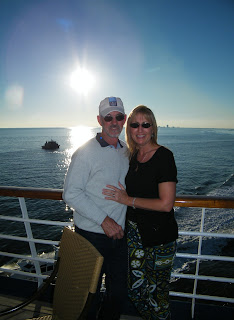 We were all excited to be letting loose and heading out. 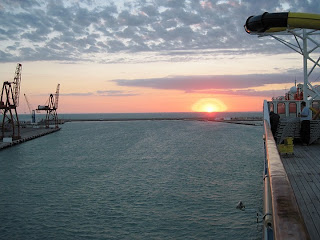 We were treated to a beautiful sunset as we threw off the last ties of "home". 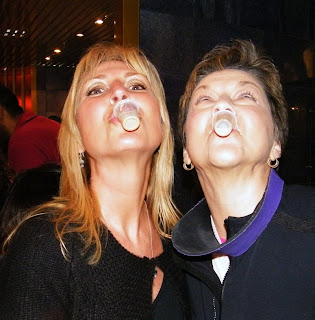 We heard the announce- ment that there would be a "liquor tasting" on the forward inside deck near one of the bars. We made haste there and found that they were sampling some of the duty free liquor choices and had several "sales". Here are Brenda and I sampling the Sheridan. Yum! I couldn't believe the prices! The guys told us that you were technically only supposed to bring back one liter each, but that if you just declared it, the customs people usually didn't charge you the duty unless you went over 4 bottles each. So we bought 10! We had Harry and Linda riding with us and they agreed to carry three bottles for us. We had no trouble getting them out in the end and my bar is now brimming. I decided that we should take a cruise every year just to stock the bar! 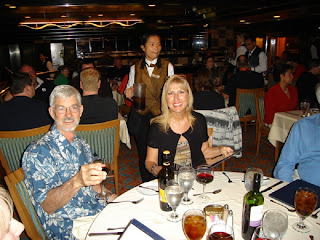 We hung around until our dinner seating at 8:15 then found our table in the main dining room. Our group had 4 tables total and planned to mix and match throughout the week. We had two great wait people and became very attached to them by the end of the week.

Bruce had ribs and I had fish in an attempt to remain the same size as when I arrived on this ship. This being a futile endeavour... I ordered the chocolate melting cake for dessert and rearranged my wardrobe from tightest to loosest. 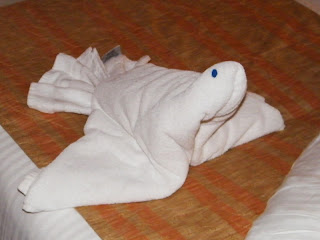 We had a ball at dinner as everyone was in high spirits. We had a lovely wine and stuffed ourselves to the gills. There was no chance of us wandering around to check out the night life. We had been pushing back our nap since arrival on the ship and we were just plain tired! We went back to our room and found that the happiness fairies had been there leaving our beds turned down with inviting lights on, and this little guy to make us smile. With 2200 guests on board... how do they do it?