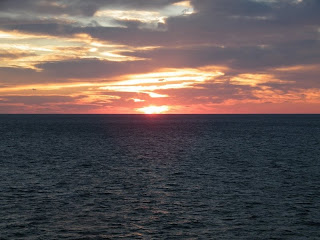 Bruce and I woke up naturally before dawn. It was such an unusual feeling to know that there was nothing we had to do today... no responsibilities, no jobs, no nothing we didn't want to do. We got up and went out, me in my jammies, thinking I was going to take this indulgence thing literally. We walked out to the Lido deck to find coffee and found this! 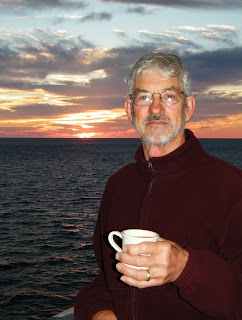 We tried going out to the rail, but the winds were really blowing out there. It was a beautiful morning and we didn't want to go in. 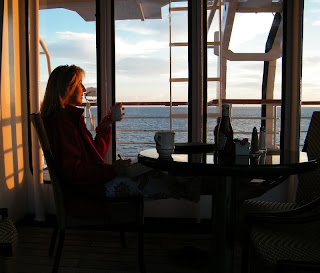 We settled for a table inside the protection of the big windows near the pool. We enjoyed unlimited coffee while we watched the sun come up. It was still cool, although not with the bite of yesterday's winds. We were headed south! 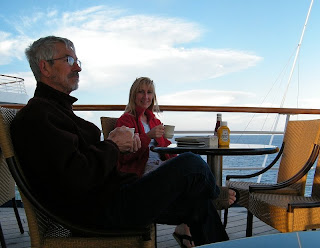 We decided to have some breakfast on the fan tail deck and had it all to ourselves. I was still trying to be good so I had some oatmeal, bagel and fruit. It was like we were alone on this big ole ship for a while. 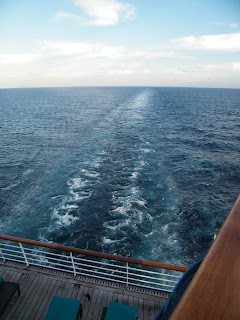 We knew we were far from home as we looked over the stern to see the deep blue of the waters churned up by the giant propellers pushing us closer and closer to our artificial summer. We were soon joined by some friends, then more and more. The next thing I knew, they were laughing about me still being in my jammies... so we fled to our room to shower and dress for the day. 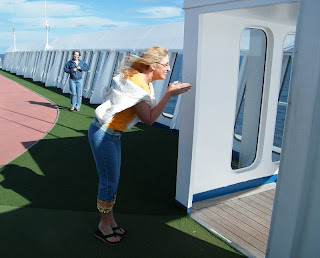 Bruce was feeling restless and proposed that we explore the boat. We took off towards the bow and started at the top. We discovered that this is where they keep all the WIND! I could hardly stand in this doorway. So much for the walking track! It was still too chilly! 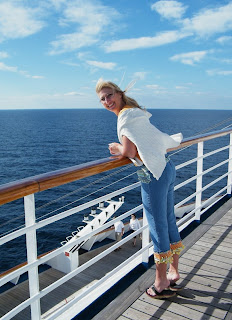 We popped out in front for a bit just to see if we could do that Titanic thing, but it wasn't happening. It was a nice view for a while. 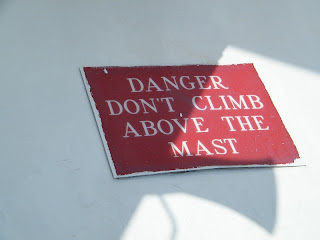 We hung out there checking out all the fun radar thingies going round and round on the tip top deck. We came upon this sign that made me so glad to be a sailor... nobody had to tell us this!

I was kidding around with my poor trusting husband. He had no idea what I was doing when I asked him to pose for this one... hit play and turn down your volume... it's kind of windy! (I love you Bruce) 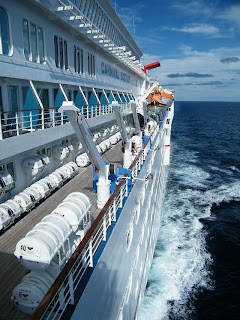 We walked along to where we could look out at the side of our ship. It's not so big! 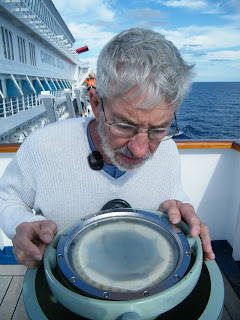 Ever the Mr. Technical, Bruce found this compass and spent some time figuring out if it was correct or not. It looked pretty old and beat up to me. Besides, I didn't care where it pointed... I wasn't in charge! 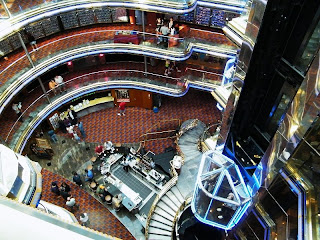 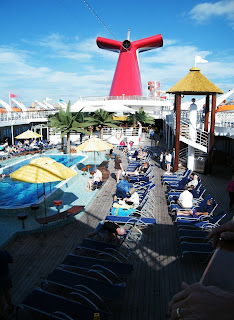 We went back to the pool area and found ourselves a nice cozy couple of lounge chairs on the upper deck rail. One in the sun for me, and the other in the shade for Bruce. 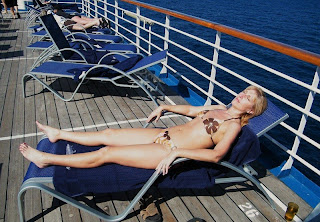 It wasn't long before I made the switch to the bathing suit. This is what I was waiting for... this is why I'm here! We listened to the "hairy chest contest" going on down below by the pool, but it wasn't interesting enough to bring us down from our perch. I even had a couple of glimpses of flying fish skittering away from our wake. 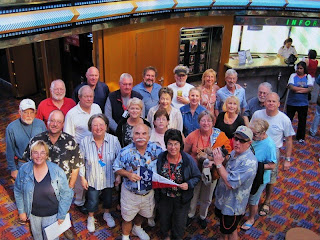 We did have one thing on our agenda this day. We were just about late to a scheduled rendezvous with the BYC bunch for a group picture. This was important because it was going into the digital photo frame we were giving to Bob and K as a "Thank You" gift for their hospitality tomorrow in Merida. Bruce and I had to run to the back of the group just before the picture was taken. 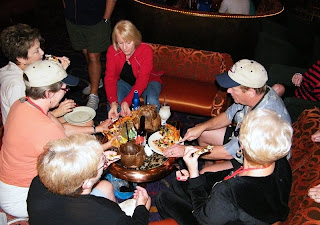 The next item of the day was to go stake our claim to a primo spot in the Starlight lounge for Super Bowl viewing. This was foremost in Judy's mind and I was hopeful that once it was over, she could settle down and enjoy the vacation. 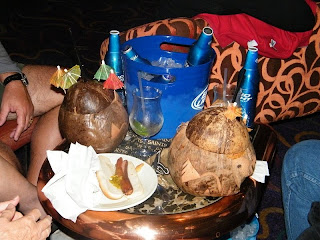 This is really the way to go. Invite 22 friends over to your place for a Super Bowl party, then let someone else do all the work. Is anyone gonna eat that hot dog? 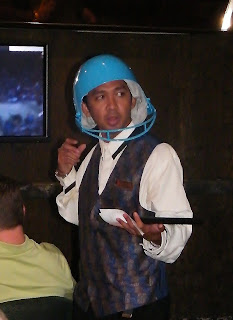 I swear the wait staff didn't get it. They were all from very foreign countries and I don't think Super Bowl meant anything to them. But they were trying like crazy to get into it. 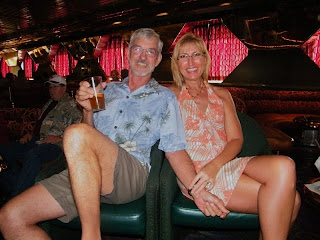 I, myself didn't get it either. But many others did seem to be interested. So, I had a nice margarita and joined them for the pre-game people watching. I left just after the game started to go back to our room for a nap and some reading. Bruce came to get me at dinner time and we proceeded to the dining room. I might add that this was prior to the end of the game. He walked away to have dinner with me. What a guy!
It was prime rib and lobster night. Bruce had the prime rib but I was still (at that point) trying to be good and so, I ordered the light grouper dinner. It was good but I was getting weaker and weaker. Cherries Jubilee for dessert! Bed was calling us again.