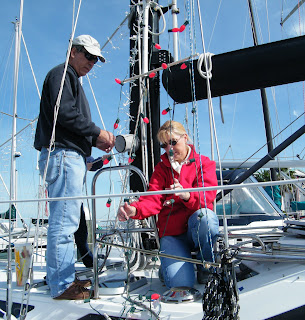 Bruce and I had long ago told Bill and Jan, our dockmates on Merlin, that we would help them with decorating their boat for this year's annual boat parade. The weather report was not encouraging but the sun was shining and it warmed up nicely as the morning burned off. 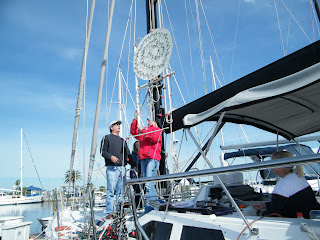 Bill had spent untold hours already in preparation for the day. He had it all mapped out in his mind. Bruce and I were just fine with being worker bees. 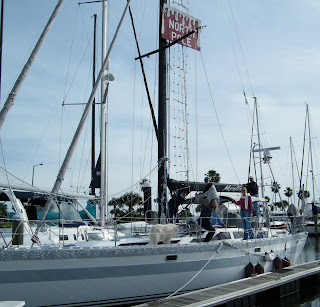 We raised the light "north pole" with the light ball on top first. It was hard to visualize in full daylight. Jan's daughter had already strung the lights along the edge of the boat and begun the process of making the "icicles" which were to hang from the eaves of the "workshop". 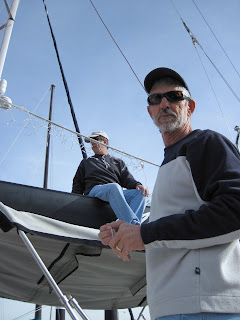 Bill climbed up on the boom to string the rest. 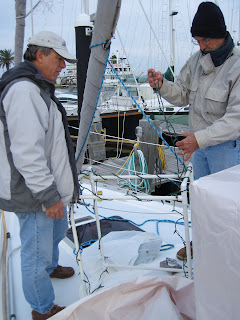 Next on the list was to set up the giant (to me) presents on the deck. Jan had made 5 PVC frames that we strung lights around. 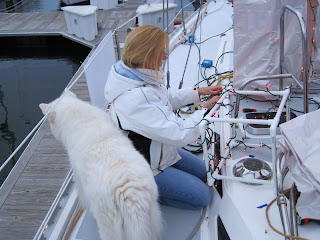 The original plan was to tape the lights on the outside of the wrapping paper. We decided to take a chance on putting the lights inside the boxes so that they would glow in the dark. It was a chance to take. What if it didn't work and the gift boxes couldn't be seen by the crowd and judges. 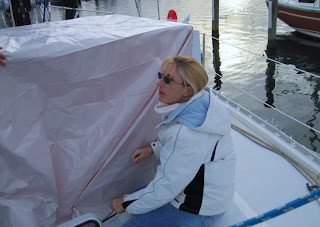 We wrapped the frames with a painters paper. It was the hardest part of the day. Once we had wrangled one frame into the paper, I was all for having only the one. But Jan put together frame after frame with the only concession being that they were progressively smaller. I wrapped and wrapped.

We were pretty happy with the presents once we were done and I was glad we did do all five. 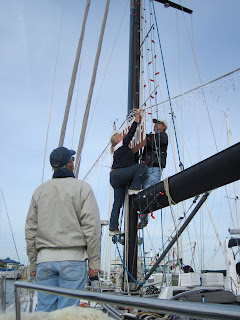 Next on the list was to put up the workshop sign. It was raised by a halyard and we had some discussion about how to keep it from flopping around. There wasn't much wind but it was starting to wave in the breeze. 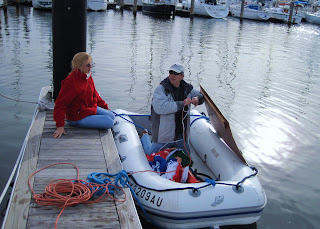 Once that was up and we were happy with the result, we turned our attention to the surfin' Santa in the dinghy. Bill had made a sign signifying that Santa was hangin' 10 on December 26th. The electricity in the dinghy made me nervous but we got everything secured. 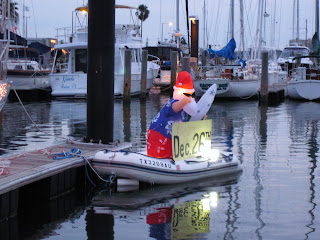 We were happy with the end result and you couldn't tell that we had no idea how to set this up when we began. 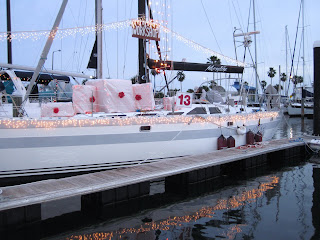 The day was moving on. It began to get cooler and cloudy. We had to put back on our coats and gloves. By the time we had put the finishing touches on... music, glow-in-the-dark bubble machine... etc., we were ready for the Chili dinner Bruce and I had brought over from our boat. 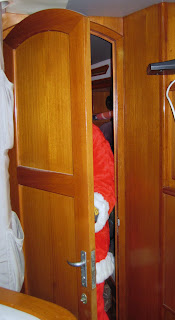 We had about an hour and a half to eat and get dressed. Bill had borrowed a Santa suit but we as yet had no Santa... but wait... who was this coming out of the forward cabin?!!??

Bruce saved the day by volunteering to wear the suit. No I'm not believing this is happening. My very own Scrooge... donning the Big Man's suit?! 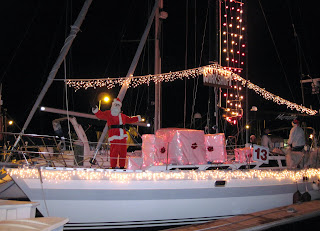 He was so cute standing out there on the deck Ho-Ho-Ho-ing! 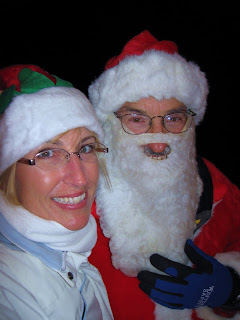 We all put on our elf costumes and hopped aboard. We wore our coats while we motored around in the cold, waiting for the parade to begin. 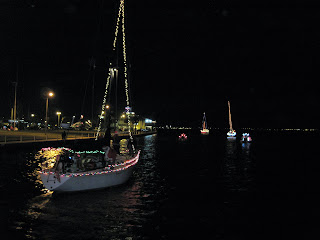 We were freezing our tushies off while we got into position behind a long line of decorated boats. It was beautiful. The night was crisp and sparkling with reflected lights on the water's surface. 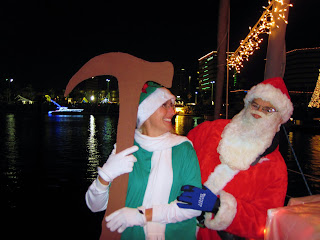 Everyone was laughing and joking. Even Bruce got into the moment. It was fun watching the little kids on shore waive and yell to Santa. Bruce responded by Ho-ing and wishing them a Merry Christmas! It was so cute! 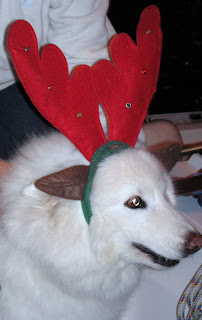 We even had the two giant white dogs dressed up for the event. OK, so they were even less enthused about this than Bruce was, but they did their part for the judges. 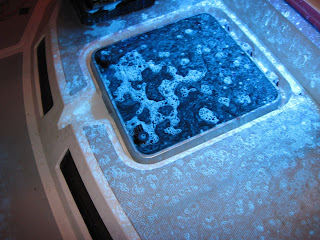 We cranked up the music and started up the bubble machine. I couldn't get any pics of the bubbles but I did get this one of the mess on the deck where the machine sat. They were very cool. 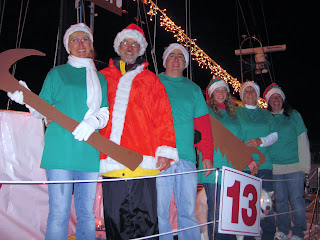 We made two passes in front of the judges, dancing and waving our tools. We really hoped we would make a good impression. The winds had picked up some and were wreaking havoc on some of our decorations. We had a couple of lights out by the time we made our second pass. It was all such fun, even with the cold! 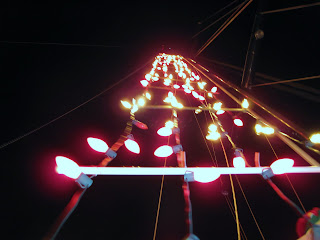 We docked the boat and took down the lights that seemed in peril. That was an adventure in its self as they had wrapped themselves together. We did manage to leave the "North Pole" however, and it looked cool. 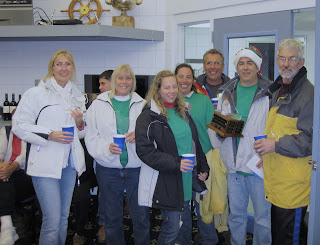 We hurried over to the marina facility room to see how we did. They welcomed our cold wet noses into the warm, brightly lit room with the news that Merlin had taken First Place in the sailboat category, as well as first over all!

We were thrilled! It had all paid off. Well, the prizes didn't equal the expense, but the bragging rights will take us far into the New Year! Thanks Bill and Jan for allowing us the pleasure of joining you again this year.