Christmas with Mark and Laura 2009 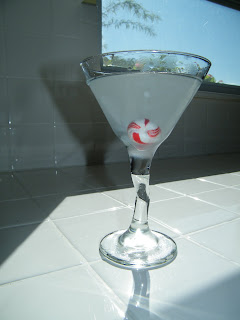 Melissa and Brittney came to town on Sunday before Christmas to be with me for my surgery. We all got together at Mark and Laura's house for dinner. They were good enough to host again this year as I have no Christmas Tree at my house, and what is a party without a light covered tree? 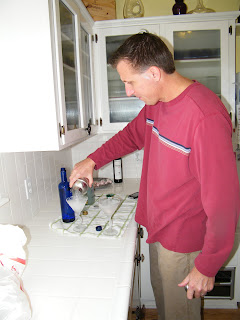 Mark was taking requests and high on my list was for another taste of those peppermint martinis like they had at their engagement party. 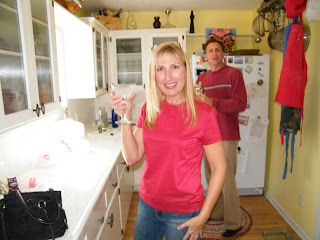 Ahhh... nectar of the gods and very festive! I've gotta get that recipe! 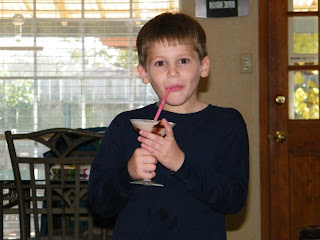 We all hung out at Mark's house while the spaghetti sauce bubbled on the stove. Nathan got his own holiday beverage... something very chocolaty! 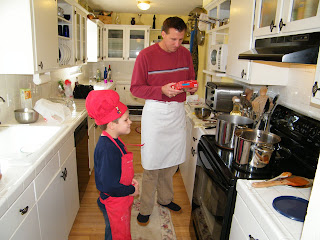 Speaking of chocolate... Nate donned his chef's outfit and made a scrumptious batch of brownies. They made the whole house smell, even to the point of overpowering the combined efforts of the sauce and the wassail! 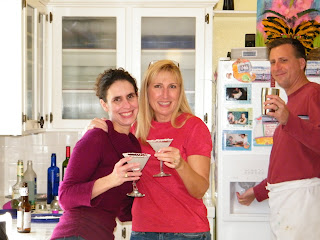 I got to spend some quality time with my new sis. She's alright, although I will say... 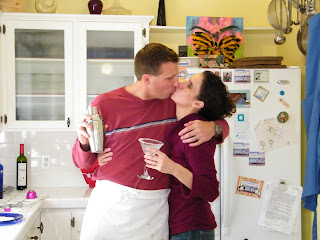 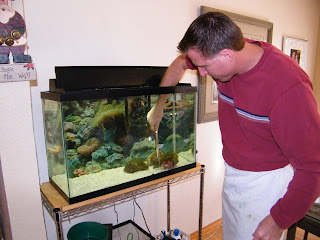 Next on the agenda was the feeding of the puffer and the crabs Mark keeps in his aquarium. 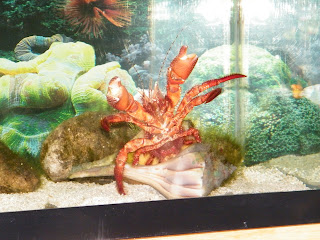 It's so cool to see that crab actually begging for food. He just climbs up on the glass and waves his little arms and legs until you drop some food to him. Then he gobbles it up and asks for more. 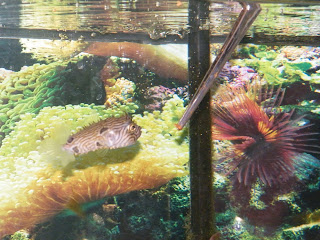 The puffer is cool too, although he will take off your finger if you let him. He's such a goofy yet sinister looking little creature. He follows the food jar around and grabs voraciously at the dried shrimp. 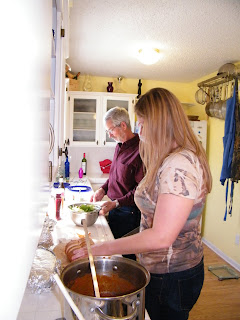 Finally the food was done and we all piled into the kitchen to get our plates. The smells were driving us wild and we were hungry! 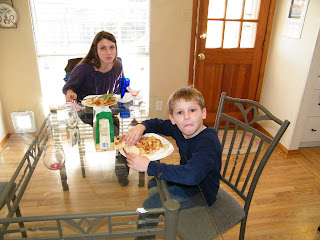 Even Nathan, usually to excited about presents, was ready to eat. I've gotta say... Mark is a great cook! 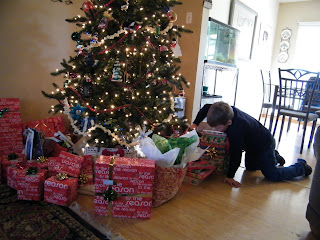 Nate was finished first and was caught checking out the loot under the tree. 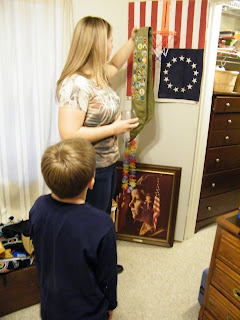 Melissa tried to distract him by checking out his room. Nate showed her his scout merits. Notice the picture of Mark in his scouting uniform on the floor at her feet. Very cool. Nate looks so much like Mark did at that age, and they have so many similar mannerisms... it's freaky sometimes. 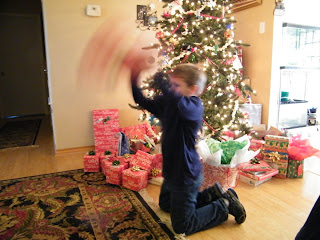 Finally, everyone was done eating and we turned Nate loose on the presents. It was his job to pass out all of the gifts. He was a blur! This year, he needed very little help in reading all of the tags and passing things out. He did a great job. 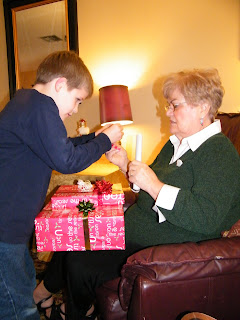 He was so serious about it and helped Carla get hers lined out to open. 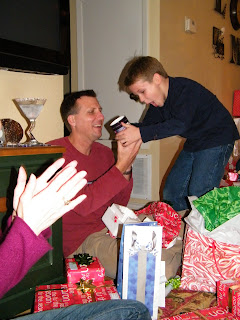 We had really not planned to do gifts this year but I just couldn't resist. I had some personal coffee mugs made on Snapfish for the Groom... 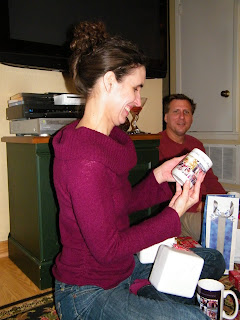 And the Bride... with pics of the wedding. 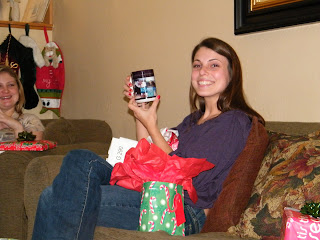 I did some for the girls and Bruce to commem- orate the fabulous BVI vacation we had this past June with our motto...
"Here's to not being home eating mac & cheese with babies". The girls loved them and I was thrilled to see them open them up. 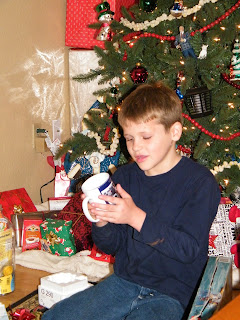 By this time, Nate already knew what was in that cube shaped box for him. But he didn't know what was on it. It was fun to watch him name all the fun things we did in Hawaii. 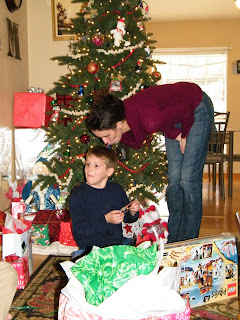 Nate was all wound up. We got him a Pirate Leggo set. He went nuts! He had seen it at the store and thought it cost $400. He just kept going on and on about the four hundred bucks with huge round eyes! 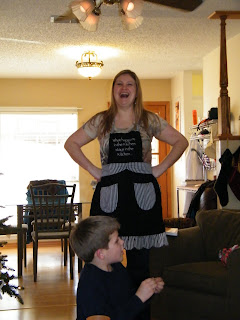 Carla did a great job with gifts this year... dinners for the adults and Melissa got this very cute little apron. It goes right along with some of the other things she's getting this year and Brittney already has one but Melissa didn't. 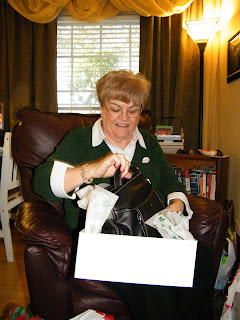 Next was Carla's turn to open. She is always so shy about it. It's nice to see her so pleased with her stuff. I shopped and shopped for just the right purse for her. I really hope she likes it. 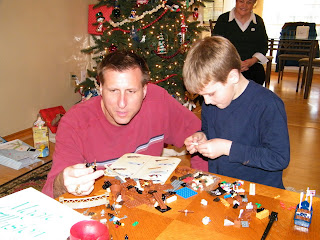 Once it was all opened and done... Mark and Nate got to work on the pirate leggos. I had no idea it was full of so many little bitty pieces. Mark mentioned something about that and I told him that he had better be glad I stayed clear of the drum isle. 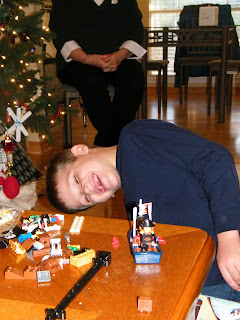 Oh, and yes, this is the Christmas of "no teeth" for Nate. How DOES that happen? Just like the song... All I want for Christmas is My Two Front Teeth!". 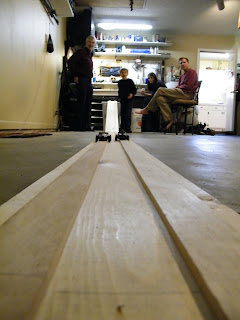 Last on the agenda, we all went out into the garage to see what was going on with the soap box derby cars. Mark had his old ones out and was working on a new one for Nate to use in Scouts. It was all so warm and fuzzy and made me miss Daddy.