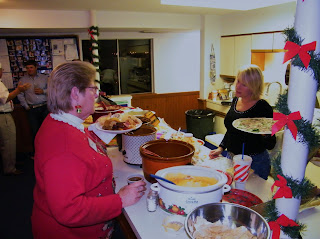 This is our first BYC Christmas party! It was hosted by the Ex-officio Commodore, Walt Crawford and his lovely first lady, Judy. The order of the evening seemed to be to eat everything on the "Naughty List"! 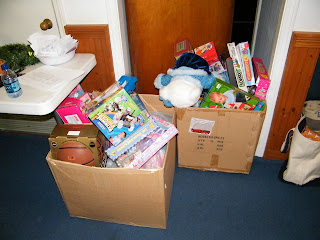 We joined the crowd bearing gifts for this year's "Toys for Tots". We are always glad to contribute even though we know next to nothing about what tots like these days. The club collected quite a pile. 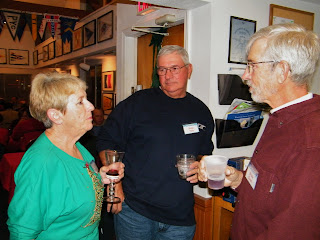 There was the usual mingling during hors' douvres. Here Bruce is chatting with Russ and Mary Lee. I am serving on the Dinner's Committee with ML this year and it seems that I have become the chairperson by default. I'm just glad to have a returning member in ML to give me advice as this being our first year as members, we are uneducated in the ways of the club. I think it will be fine. There are a number of new members and I've heard talk of things "changing" with all of the new blood. 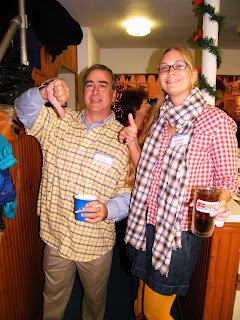 One example of these changes, come with the injection of young blood. Amanda is one of our newest members. She's saturated in fashion sense. Here she is trying to instruct Bill in the ways of the successful vs. unsuccessful mixing plaids. I'm not sure I get it either! 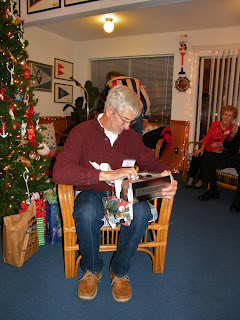 Before too long, we got down to the business of the gift exchange. We drew tickets to determine the order and Bruce picked a gift. Of course, it was booze and it was very soon taken away from him. 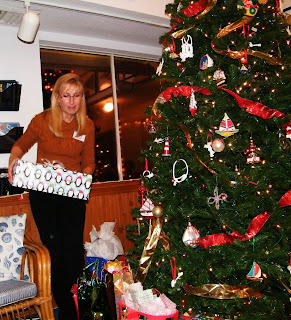 I picked a nice big gift from underneath the Christmas Tree. 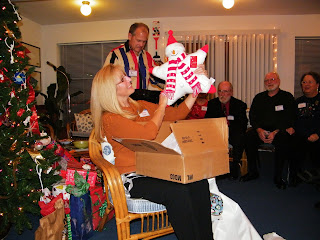 This strategy did not pay off for me. My gift was a Christmas decoration. Since the kids left home, I've not put out much in the way of holiday decor. Nobody look at it too closely as it may be regifted next year. I left the tags on it.

Our contributions to the gift exchange were a set of 4 stemless wine glasses and a vertical Houdini wine opener. These were both stolen after opening. A source of pride for us. 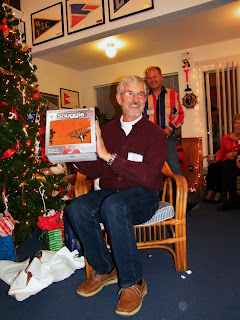 As I said before, Bruce got his chosen gift stolen several times and ended up with a "TEXAS" Snuggie. Nobody tried to steal this bad boy. Bruce was not too happy as he has a stigma attached to the wearing of garb in advertisement of a team or place he has no attachment to. The bringer of the gift said that she was sure it would be a hot item, but those who would have appreciated it were not present. Bruce ended up trading it to someone else the following morning and got a little tool set in exchange. 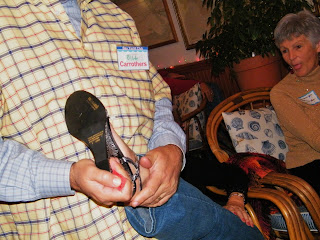 At the point where gifts under the tree were dwindling, the game got rough. I'm not sure exactly what was going on here, but you can know that if Bill is involved, here will be mischief. 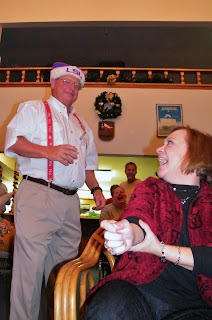 People were swiping opened presents left and right. There were sharks trolling the aisle looking for the tastiest morsels. 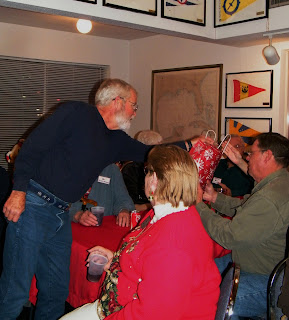 These gleaming eyes are never good! No one is safe, nothing is sacred! 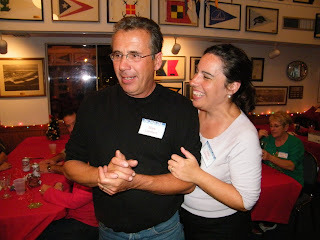 This game turns perfectly nice people into fiends! Here is a sweet wife, Julie, instructing her mild mannered husband, Mark as to which present to swipe in cold blood. 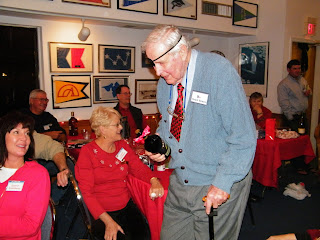 I am glad to say that these people do draw the line somewhere. This sweet little old man just wanted some Baileys! He got some, then it got taken, then he got some more, then it too was gone. (there were quite a few bottles of Baileys this year). Finally, he raised himself up on his rheumy knees and hobbled over to where there was a bottle on it's last steal. He GOT IT! The crowd cheered as he made his way back to his chair satisfied with his haul. These young bucks got nuthin' on the old codger! 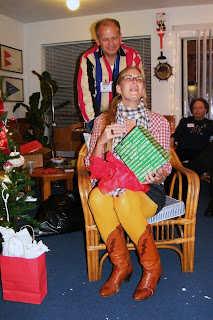 Amanda was another one whose gift was repeatedly stolen from her, forcing her to go back to the tree and choose another. Here she is opening up her final gift, eyes formerly full of hope now show despair as she realizes that her gift is a card from West Marine. Goodie you say, but as the story goes, Ms. Amanda has somehow managed to get herself banned from ever setting foot across the threshold of a West Marine Store again. Oh Woe! 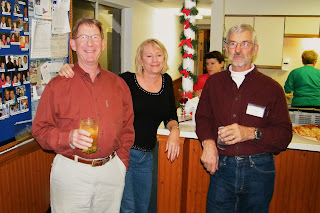 Finally, after what must have been over 2 hours of "exchange"... the gifts were all settled. We once again turned to chatting and drinking with friends. Mark and Brenda had only just arrived at the end of the evening. We barely even got to talk when it was time to hit the sack. It seems that no matter how late Bruce and I stay up, there are always those who out last us. We walked back to the boat to snuggle up in the cozy V-berth for the night with smiles still on our faces from all the fun.