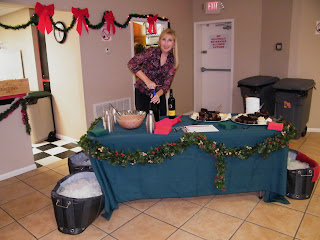 It's the end of the first full year on our own for myself and Jana, our new administrator. We've worked very diligently to improve employee morale and this party is very important to us. It's our way of saying "Thank you" to our wonderful group, without whom, the year wouldn't have been such a financial success! Jana, Lydia and I worked all day setting up the party. 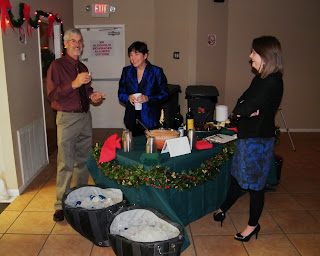 Bruce was our ground crew again. Finally it was party time. Dr. Stafford was the first to arrive. Jana had done away with the margarita machine this year and replaced it with a scrumptious champagne punch. It was very tasty and could be sneaky! 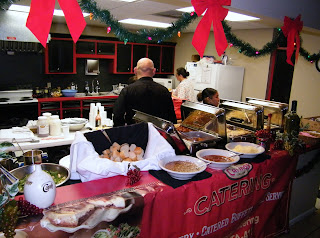 This year's catering was done by Johnny Careno's. It was the brainchild of one of our newer employees, Stephanie, without whose help, the party wouldn't have happened. She did all of the legwork and organization right up to the day before. The food was said by many to be the best catering we've had. 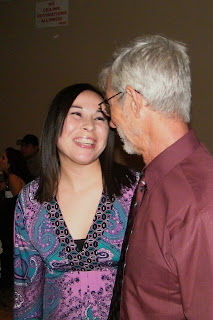 Bruce had his chance for some conversation with my "Right Hand", Lydia. She's been with me since just after I began working for OGA 13 years ago. I can't even imagine how I would go on without her. We've been through everything together and she means the world to me, and to Bruce. 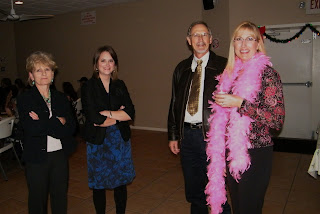 The place filled up and the food disappeared. The party was going... I didn't buy anything new for the party, so I just picked something out of the closet at 5:30 and threw in a boa for effect. It's not every day a girl can trot out the boa so one must make use of every opportunity! It went over as well as is to be expected with only one registered complaint about the color choice. "not Christmassy". 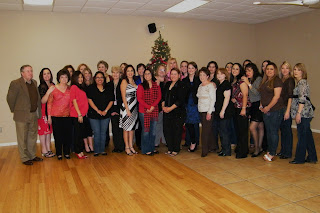 This year Jana and I were sure to get our group rounded up for a photo. We only let one Dr. get away. It's fun to look back at these as the years go by and remember who was here. Our group has finally begun to stabilize. We're hoping not to have too many missing or new next year. 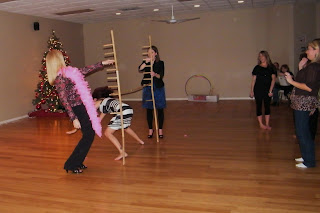 Once the dinner was over, the music came up. We drew for prizes, we played limbo, we played hula hoop! We had a new winner this year as last year's winner was largely pregnant and decided it would be best not to go too far. 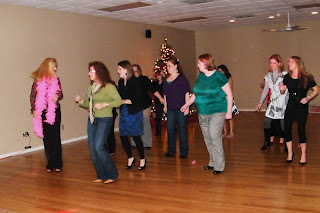 There was a parade of line dances. I tried to get it but was near hopeless! Never let it be said that girls don't WANT to dance with boas! This year, the party really got going after the last of our physicians left. The last hour of the night was the best! My boa got into the mix, leaving feathers everywhere when it was all over.

Finally it was time for the lights to come up and the cleanup to begin. Guests left and my feet were near terminal before we were done. But, we had some help and got it all wrapped up for another year. Next year will be a challenge to top this one!