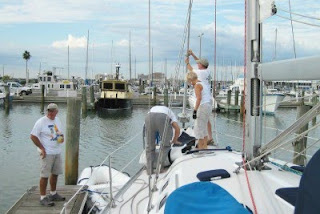 Bruce and I joined our friends Brenda and Mark aboard Sea Flight for this year's Annual Commo- dores Cup Regatta. It's an exclusive BYC club regatta... members only. We hoped this would mean no collisions. We only hit boats outside the club membership. We met up early so that we could change out the head sail on Sea Flight. The winds were forecast to be light. 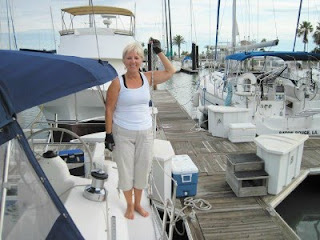 We had a good time messing around. Mark asked Brenda to leave about 5 ft of line on the furler... What better way to determine just the right length? 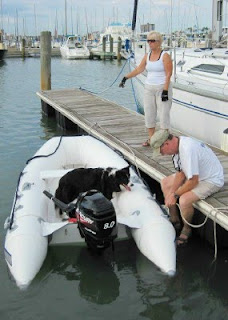 Bob & Kay's dog Hammisch (spelling?) went nuts when Mark moved the dinghy. He wanted to GO! Hammisch was made famous in a recent Noah's Arc Article in Latts & Atts. 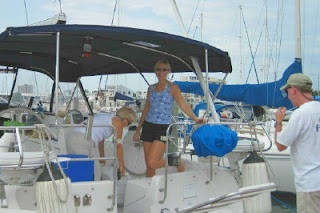 After the Skipper's meeting and a trip to the grocery store for provisions... we were ready to set sail. 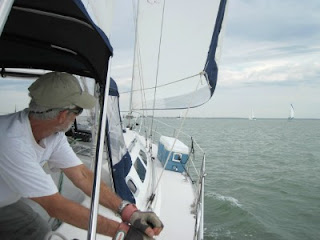 We milled around trying to plan our strategy in the light air. It's always a challenge, and especially so on a 40 ft cruiser. 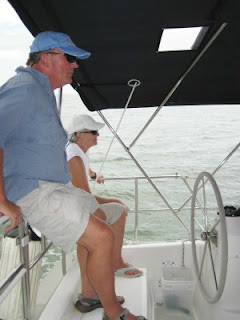 We had a new couple on board today. Don and Kathy, who are recently returned from a 6 month cruise. Their boat is on the hard in Florida awaiting their return. They were so nice and much help. Don really knows his stuff and Kathy is no slouch either. We extend an open invitation to sail with us any time! 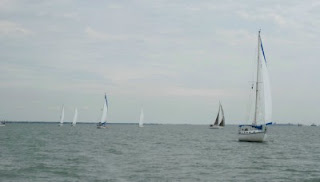 The start was uneventful... it's hard to get to the line in a frenzy in this light air. We made the mark and set out with hope for a good race. 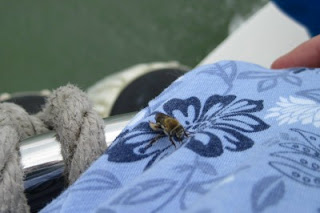 I'm on a new blood pressure medication that keeps me tired and dizzy all of the time. I set myself up as official photo- grapher and had few duties outside of that and a couple of wench releases when my bossy husband ordered me to get off my ___ and do something. I was counting daisies out in left field when I was accosted by this bee (of all things out in the middle of the bay) that seemed to be attracted to the flowers on my shirt. It took quite a while for him to decide there was no nectar here and leave me be... (pardon the pun). 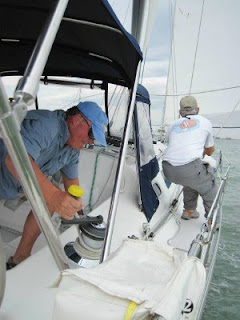 While I was so occupied, the crew was busy trying to get every bit of speed out of the sails. 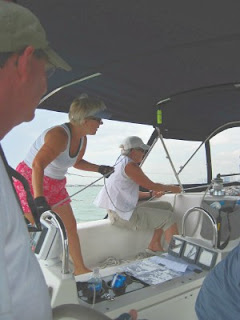 Brenda and Kathy made a great team on the cabin top and had their jobs down to a science. 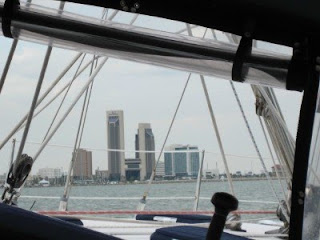 It was a long slow race but we had clouds to keep us cool. It was quite a pleasant time out on the water with the best view in town. 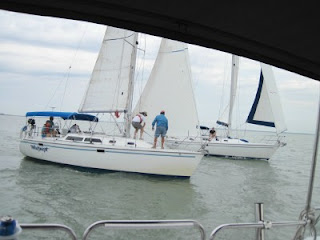 We finished the first race and had gourmet sandwiches in the cockpit then milled around until the start of the second race. We got a brilliant start on this on in even lighter air. 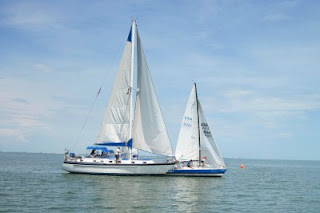 Right behind us after we crossed the line and set off... there was a close battle going on. Of course these always look much more harrowing than they are... Oh and the sun came out! 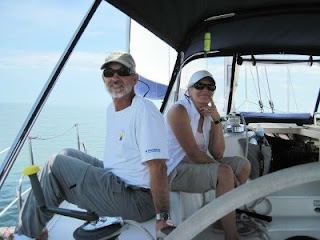 Happy days! Except that with the coming of the sun, we had the going of the wind. It was hard to imagine that it could drop any more... but it did. 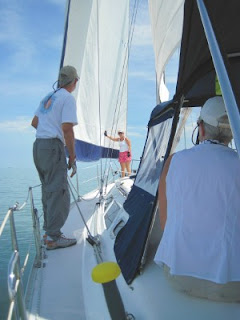 We came to a stop out in the bay and just sat around looking at each other. Some boats would move along slowly in the little puffs... our crew worked hard to catch any little bit of wind that came our way. 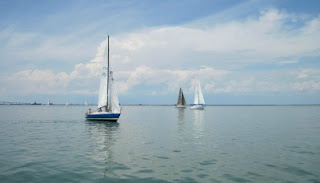 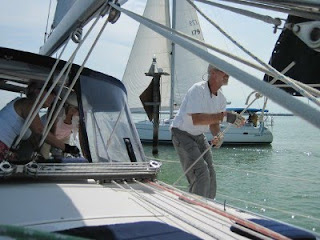 Finally the winds began to fill in a bit and we were able to get around the course. We had some close calls at the marks. It was suddenly a bit more exciting. 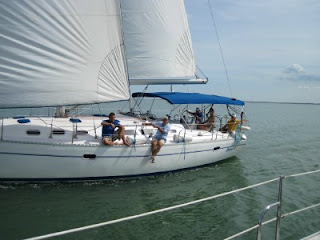 Our friends Jacque and Steve were aboard Susan II. They rounded the mark and came up on our stern. We talked some ___ as did they. It was all in good fun. Steve is very serious about racing at all times. I watched as he tweaked and worked the sails and got this nearly identical boat to sail right on and pass us to the next mark. Good job Steve! 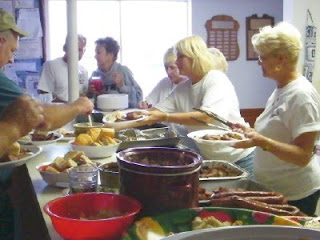 We finished the second race and made it back to the slip by about 5:15. There was a party and dinner beginning at 6 pm so Bruce and I didn't spend too much time hanging out at the dock. We ran home to shower and change and made it back to the Club just in time for the dinner. Our Commodore had left an able crew behind to cook all day. The result was a fabulous brisket dinner. Thanks to all who slaved while we drifted around all day. 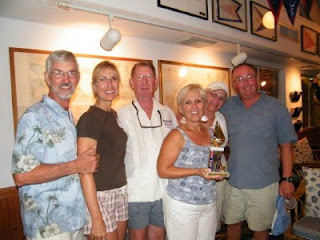 We ended up with a Third Place trophy for our efforts. We had a wonderful day and met a great couple of sailors, as well as enjoying the company of our good friends Mark and Brenda, who as always, were the heart and soul of hospitality. Thanks for another great day on the water!