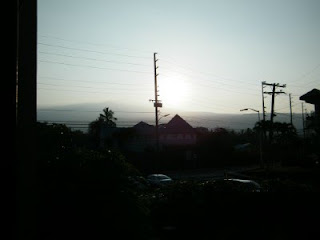 I know what I would do every day if I were to live here... I would take my coffee onto the lanai and look up towards the volcano to see what sight would greet me that day. Today was another voggy day. You can't really see the top for all of it it buried in the vog. It is another kind of beautiful. 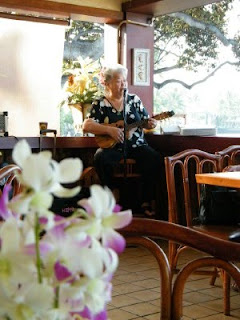 Mother and I found a very good breakfast at a little place called Tantes. They have some kind of arrangement with our hotel for "locals discounts" and are right out the back door on the water. We found this woman playing ukulele and singing island songs in a sweet thick voice. Oh and don't forget the value of fresh orchids on the table! 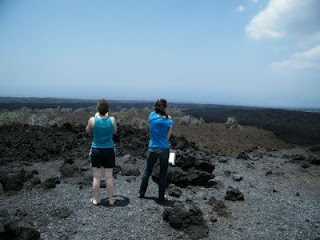 We picked up a rental car this morning so that we could follow Mark and Laura around the island to the Volcano National Park. We made many stops before we got there. The first along the way was where the roads were cut through the ancient lava floes. You can see in this picture that there are brown and black patches. The black patches are from a more recent floe that occurred back in 1907 and look just the way they did when they came to be there. The cliff over the ocean down from here is 12 miles away and it's the southernmost point in the United States at 18'55" N. It is where we are headed next. 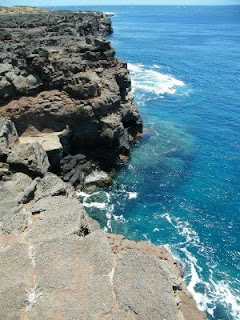 On we go. It is really further away than it looks, as is everything here on the Big Island. We're at 1900 ft elevation and will gradually go down to the water's edge at what... 20 ft? It is so beautiful here. We passed wind farms placed out in this vast lonely expanse of no-man's-land. 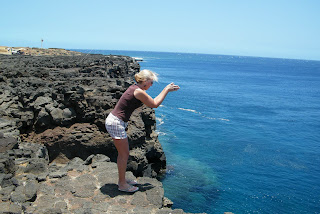 It's fun to think about this being as far as you can go and still remain in the US. If I were to jump off right now... I'ld be OUT! 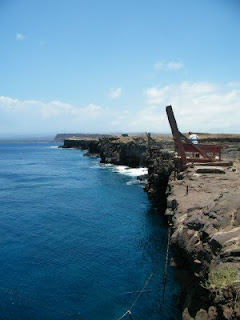 There were platforms built along the edge of the cliff where people do just that! Laura has done it and tried to get us whipped up to do it with her today but as you know... NO WAY! The wind was strong enough whipping across this point that it almost blows you off but that would be the only way I would go.
Next on the agenda... Volcano Park! Again... it doesn't look like much, but on these winding hilly roads, it takes much longer than you might expect. 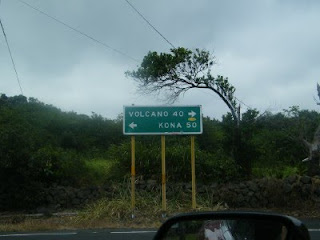 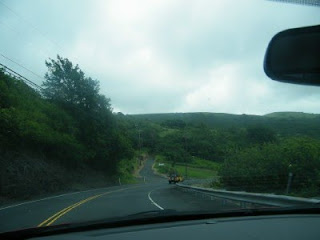 But the view is worth it! We left our side of the island behind and started up the "wet" side. This side receives most of the rainfall and is much more lush and green. It was fun to zip along in our rented red convertible. 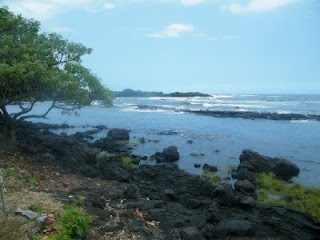 Our next stop was at a little park to check out the shore. Laura has been here before and is our personal tour guide. She showed us all the little places that she loves. This place was not covered in tourists, and was quite lovely.

We had the most wonderful time playing with a tiny eel that Mark and Nathan found lurking in a little hole in these tide pools. Here are two short clips that show him. When Mark found him, Laura ran to bring the leftover Poke' (which is tuna sushi with lots of spices) to feed to the eel with chopsticks. I missed the initial grab with the camera. The little thing grabbed that chunk like he hadn't eaten in a month.

The second piece he was much more coy and waited until Mark placed it on the rock outside his door, then snatched it and took it into his lair. He came back for more though and we left our remaining pieces to another tourist that had come to see what all the fuss was about. 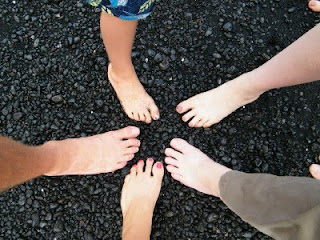 Next stop was the black sand beach at Pu Nalu'u. It was a beautiful crescent volcanic beach with the waves crashing in. 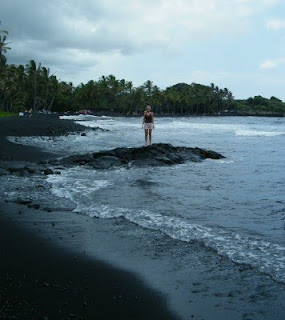 I decided not to get in since it was early in the day and not very hot. I didn't want to be sticky for the rest of the day's activities.

Mark, Nate and Laura had no such problems. Nate had an absolute blast playing in the surf. Mark sat there and I told him he would never get the little black pebbles out of his pants. He was not afraid. 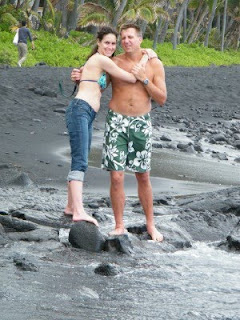 Laura tried to get a little snuggle from her man and it reminded me so much of waiting until he could make a decent face for pictures when we were kids. She should have pushed him off of the rock! 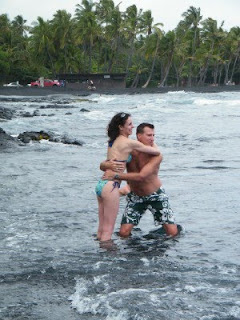 She finally got him to come around but it was all an act. He had deceit in his heart when he grabbed her and threw her into the surf. She recovered well and held his head under the water. She let him up before the bubbles stopped. 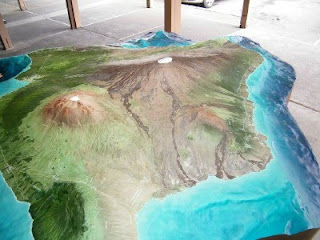 The next stop on the agenda was the main event. We loaded back into our cars and drove the rest of the winding road to the Hawai'i Volcanos National Park http://www.nps.gov/havo/index.htm . Check it out. This is a relief map of the island of Hawaii. It was cool to look at and get some perspective. All of the other islands we've visited were very small. 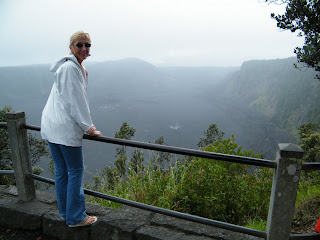 We parked and looked out over the crater. I was prepared with a raincoat as it is almost always precipitating here. It was misty with a light rain or heavy vog (volcano fog) as I gazed out over the crater floor. We could see a moonscape of cooled lava sprinkled intermittently with hotbeds of glowing smoking lava. They just quietly patiently sizzled... waiting until we weren't looking. 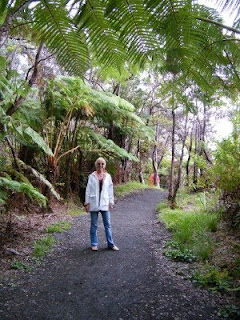 We took a hike along a trail that looked like the land of the lost. Giant ferns all dripping with moisture. Mossy banks with jagged rock caves sinking just off the path. It was all cool and dark. I was glad for my little white raincoat for sure. 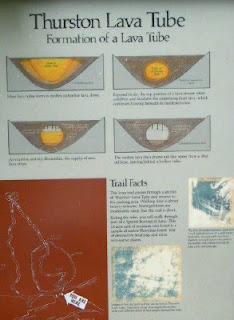 We were winding our way towards the entrance to the Thurston Lava Tube. It was another of the big things on this adventure. 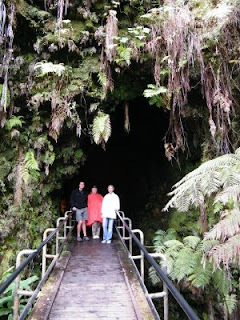 We followed the path through the jungle and across a bridge that spanned a deeper ravine. There were mossy things hanging into the entrance of the tube and moss covered the walls. The entrance was bigger than I thought it would be and there was a cool breeze coming out of it that smelled moist.

I took a few pictures but this little video came out much better than those and kind of gives you a feel for it. After we climbed out of the main tube, some of us went down into another smaller tube that I don't think had another opening. I took Nate down with me. Hawai'i is a 6 year old boy's dream! 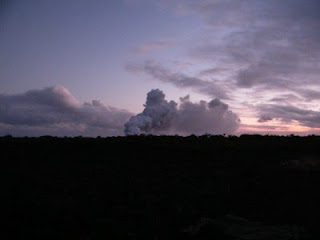 It was beginning to get dark and we still had a way to go. The lava floe is currently entering the Pacific at a spot which is outside of the designated National park area. We had to leave the park and drive through a barren rocky patch then back down to the water's edge. We could see the plume of steam for miles. 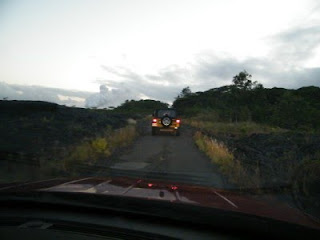 We reached the parking area just at dusk and didn't get the full effect of driving across the lava. They literally laid asphalt over the new lava for us to drive over. It was a bumpy ride and we were going as fast as we could so as to get in before dark. 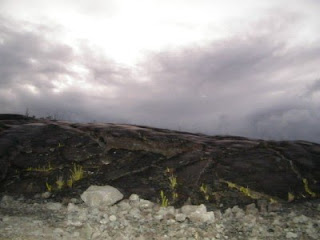 The scene was surreal. We walked over the lava along a pathway marked with reflective stickers to keep us from straying off the path and falling into a hole with the sleestacks. The plume of steam rose up and we could now see the glow of the flare ups as the lava reached the Pacific. We walked on as quickly as we could to reach the viewing area with our flashlights bobbing along with those of a thousand other pilgrims.

We stood watching the glow of the lava in the hush. We could hear the waves crashing on the shore in the distance. It was an awsome ending to our journey.