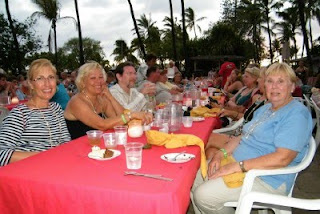 I woke up at 3 am the morning after the wedding wondering what I might have said in my toast that might not have been appropriate... I guess everyone does that some time or other. Today we would pack and check out of our hotel. We would still have hours to go before our flight. There's always shopping. I think I bought about another hundred bucks worth of stuff "as an afterthought". We got our tickets for another Luau which was held in the King Kamehameha Hotel right across the street from ours. By mid afternoon we had run out of steam and so we spent an hour and a half sitting in the lobby waiting time to be seated at the Luau. I got caught up on journaling. 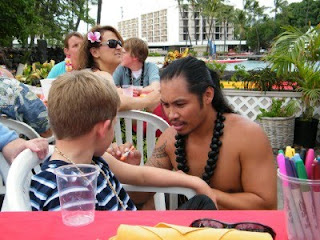 We had purchased preferred seating again. While waiting in the line... Charlie and Annette showed up with Chris and Glen! I was so glad to see them. I knew that they were going to a Luau but I thought they were going to the one we had seen previously. They quickly exchanged their tickets for the preferred and when we were seated, I made sure they were placed at our table... once again front and center. 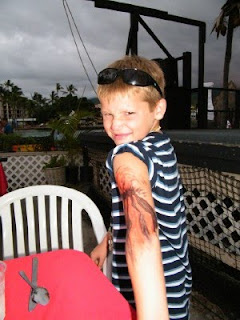 I love the special treatment. The general seating didn't have the "tatoo" guy come right to their table. Nate thought he was really something sporting this tat! 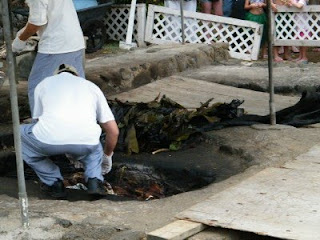 We did have to leave our table to go and take a look at the pig in the pit! We watched as the guys took it out of the ground. It looked kind of nasty to me. 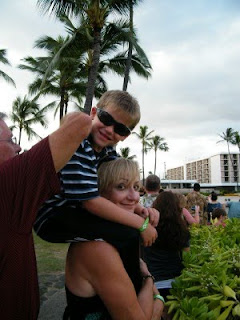 We stood and watched as the Royal Court came in. Nate got a great view. 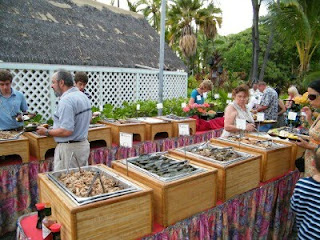 There was an open bar and pre-made Mai Tais to which you could get another splash of rum added. Our table was the first to be invited to the buffet line. The food was very similar to that offered at the other Luau we attended. Some was a little better. The poi was still yucky! I tried, but it's not happening this trip. 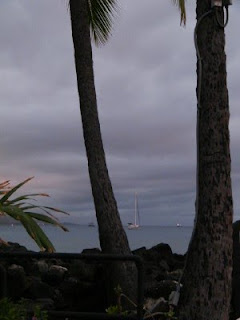 I think I'll have to try to drag Bruce back to the islands some time. It's so beautiful here. The Big Island is not as expensive as Maui and has different things to offer. I've heard it said that the other islands are just as different. Maybe when he's too old to bare boat, we can travel cushy and come back again. 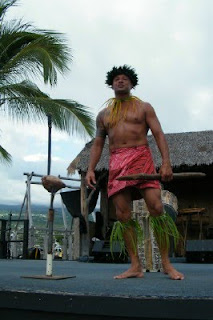 Before long, the show started. The stage was literally less than 5 ft away from my chair. It was similar to the last Luau. It began again with Coconut 101. 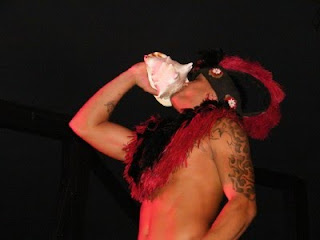 Then they called the dancers. 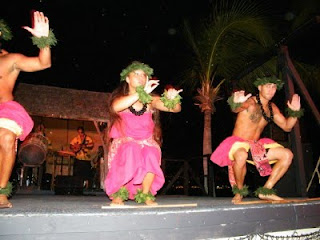 They followed the same plot. Kings of the different island groups and the dancing and costumes of each. 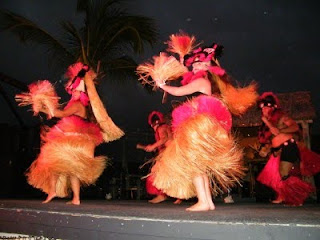 It was just less production and more hula! Man I wanna learn how to do that! How much do you think these chubby girls make dancing a few nights a week in Paradise? 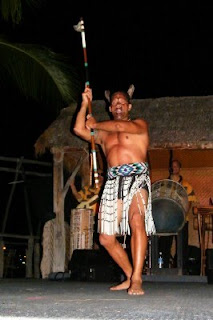 The segment about Aotearoa was again the most alarming! It doesn't make me want to pack up and go see New Zealand... although I'm sure they've calmed down by now. I hear it's a beautiful place to bare boat. 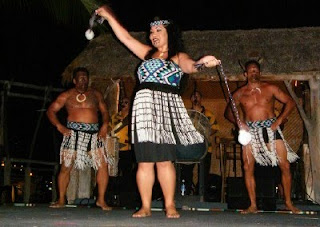 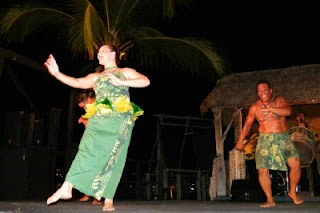 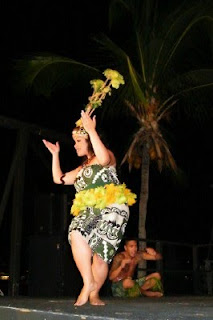 We really enjoyed the show and it was certainly a better sendoff than sitting in the airport for hours. 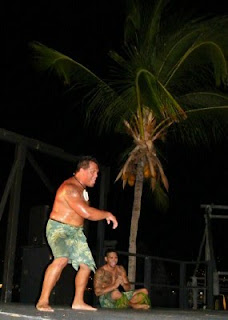 This guy was very funny but he was sweating buckets!
I was so close to the stage I got splattered a couple of times! Eeeewww! They were very energetic and I appreciate that but I draw the line at sweat splatter! 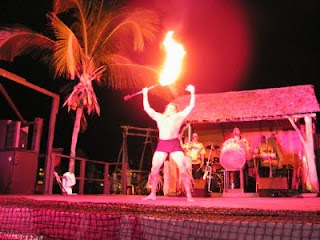 Finally, the moment we had been waiting for... 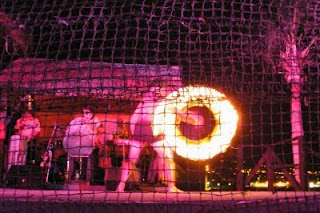 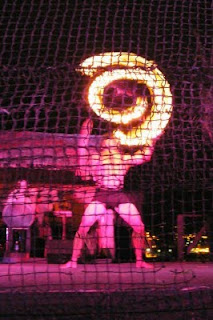 They put up a net so we wouldn't accidentally get hit with a flaming baton... (where was that net when I was sweated upon?)... 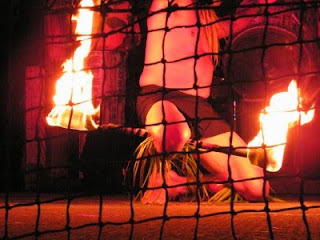 The fire show at the last Luau was good but this one was great! Talk about energy! I wonder if Bruce could do this... It was the perfect finale to our trip. We literally left before the final curtain to run to the airport and begin the arduous journey home.