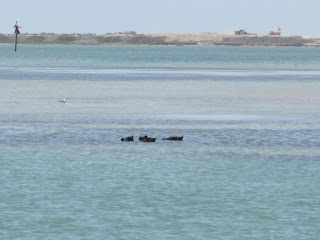 Steve called me mid morning to see if I would be interested in going out with Jacque to IOB in the early afternoon. I had no plans that couldn't be easily moved so I said yes.

Steve would be dropped off at the college in his kayak to paddle across the bay to Ingleside On the Bay. He would then put together their two sunfishes and let me have a go at it. The winds were down finally and it should be a perfect day for my debut.
Jacque and I arrived before Steve did as the winds had come up a bit and it took him a bit longer to slog across the bay. We sat out under the shade and chatted with the regulars. Jacque and I had brought some munchies so it became a regular little party. 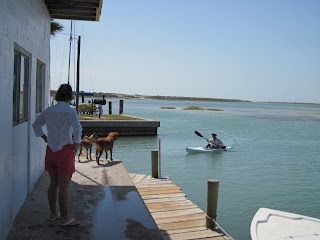 Steve showed up soaking wet and stoked. I want to know where he gets all of his energy! There was lots of sitting around chatting and drinking of beverages but then it finally came down to it. Jacque took out one boat and Steve offered me the other. I went so far as to get dressed for it this time, but then looked out over the water and saw how gusty it looked, saw the shallows out there that I would have to lift my dagger board over... thought about the rudder and the main and the boom added to that, and decided that today's winds were too much for me. I can't even drive a standard automobile! No way I could work all of that out. I deferred to another more benign day with no shallows to hit. And fewer witnesses. 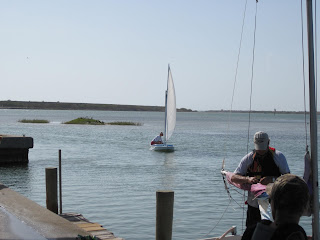 I did feel a bit better about my decision when Steve and Jacque both came in saying it was a bit gusty out there. Although they were probably just saying it to help me out. My day will come!