We've been running the roads for weeks. Before that, we were painting and doing house projects. I swear I'm determined to settle down and just chill for a while. You wouldn't think a mundane thing like a trip to Sam's Club would be an occasion for continued exploration... unless you live in Puerto Rico!
I found this place because someone has put the stations on the app I used for the trip to Las Cabezas.  It is right behind the Costco, only about 5 minutes away from Sam's Club, where we were headed for shopping.  Why not go and take a look?
My first impression was... unimpressed.  After winding through neighborhood streets, we weren't even sure this was the place.  At first glance, the river looks a little overgrown, and not a lot of water running today.  So we adjusted our expectations to just having a nice stroll alongside a river for a bit of exercise, and the place far exceeded those!  Come with me through a concrete art walk in the heart of Caguas, called Honor al Rio.
I'll just tell you about them in the order we found them.  We parked the car where Google Maps indicated, although I'm sure it doesn't matter and you can park anywhere along the way.
"Corrientes Encontrada"
Artist: Diana Dávila
2003 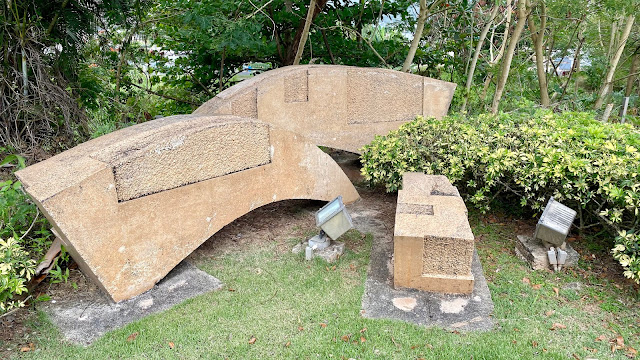 Currents Encountered: The three pieces represent like us, with different experiences and coming from different paths, we meet to to form a common experience, a flow through the river of life.
Interesting.  Like most objects of art, it can be understood, or not.  It's a bit of an adjustment to consider huge chunks of concrete as being art, but as we walked along, I realized... it kind of grows on you!
The wide sidewalk was replaced by a dilapidated boardwalk.  Some boards were missing, and others looked as if they could go missing with the step of a misplaced foot... The place just looks a little tired.  But with a mind full of appreciation for what once was, you can imagine that this place was truly very upscale at one time. 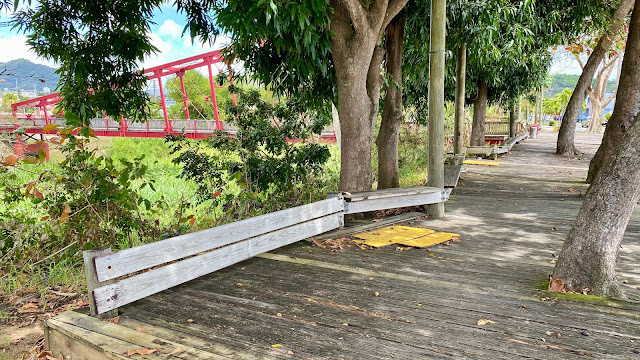 I get the feeling that I'm walking in the shadows of ghosts that once lived in this thriving, vibrant community.  Somebody paid for all of this to be here.  Buying art for public spaces means that there was once MONEY here.  I can't help but feel that there is still a river of pride running beneath the surface of places like this, and that some day, perhaps in the not too distant future, these places will thrive once more. And I will be right here enjoying it all and feeling all the more connected to our adopted island home, because I knew it now, and can remember when it wasn't so great... for a while.
"Poesia"
Artist: Carlos Guzman
2003 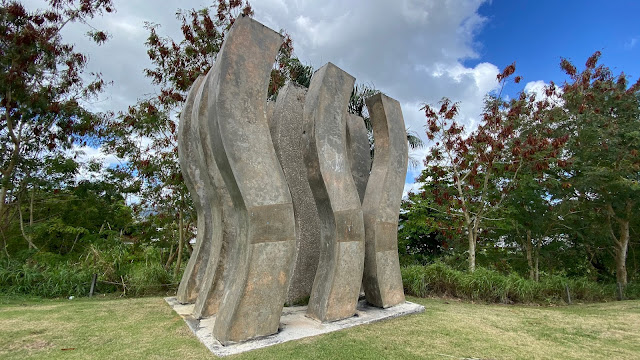 Poetry: The nine elements represent the flow of river waters symbolically. It's poetry inspired day by day by those who contemplate this wealth that gives us the nature.
We backtracked to the boardwalk and walked across this pedestrian bridge over Rio Caguitas.  It was built in 2006, and looks to be in pretty good shape.  It was fun passing beneath this bright-red painted structure! 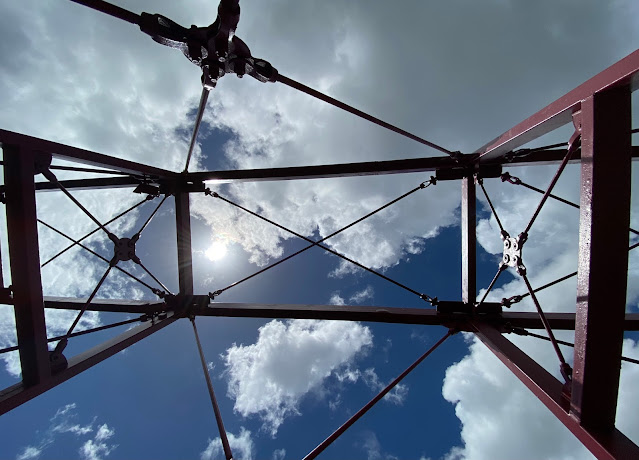 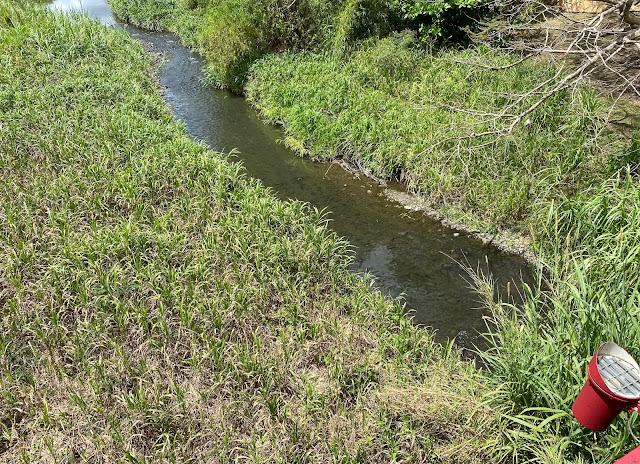 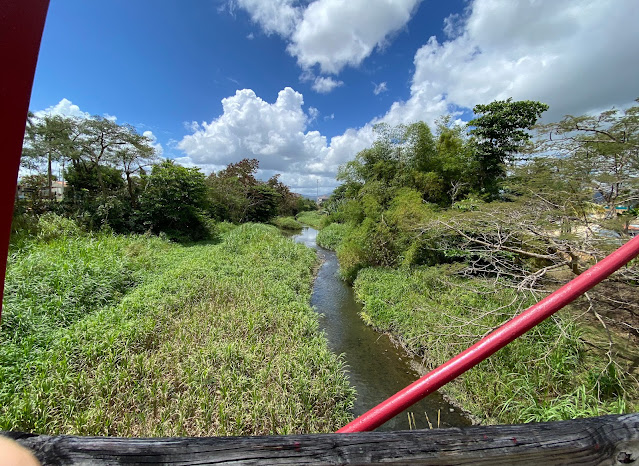 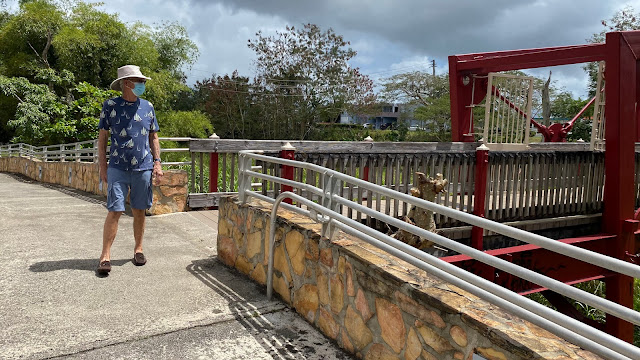 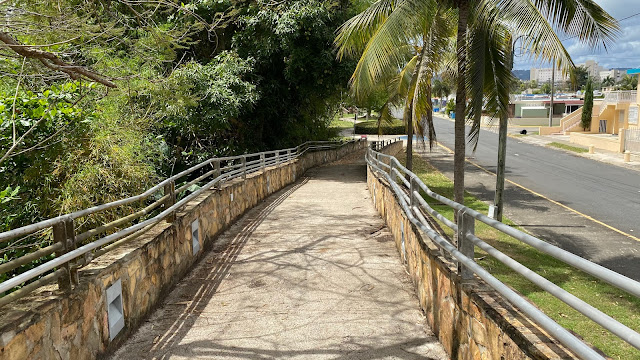 Reaching the opposite side of the river, we found a very nice ramp that gradually lowers you to ground level as you continue the walk along the riverside.  We found more concrete are along the way...
“Reflejos de Luna en el Río”
Artist: Carmen Inés Blondet
2007 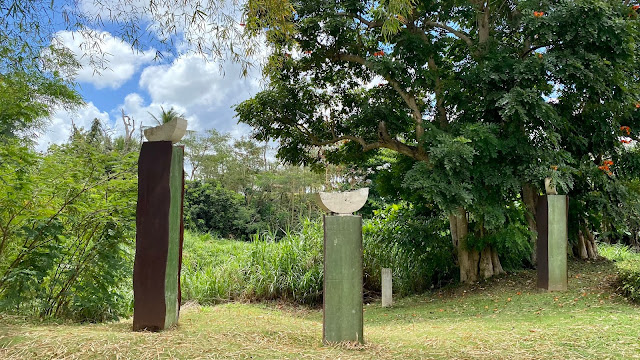 Reflections of the Moon in the River:  The river and the moon, important elements that, along with others,
make up mother nature. The moon with its cycles and its light, the river as a facilitator of life. Icons revered since ancient times that create a contrast between the ephemerality of human life and eternity
vulnerable of nature. The moon and the river through the reflections come together to make it clear that, in life, we are all an important part. Human frailty finds comfort in thinking that we belong to that great living nature
"Custodia"
Artist: Jeanette Betancourt
2003 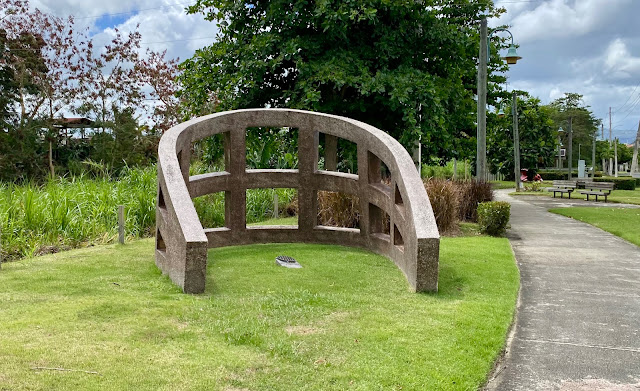 Custody: The function of this sculpture beyond the aesthetic - is take care, together with the inhabitants of the area, this new space of recreation and leisure for your enjoyment. 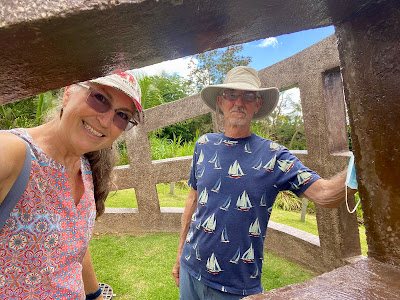 Next, I was distracted by a breadfruit tree!  It's been a while since I was up close and personal to one, and walking under the canopy, I looked up and it was really very beautiful and peaceful under there! I also took a step backward, not paying attention and stepped right in the middle of a rotting fallen breadfruit!  They really don't last very long once they're picked, and thank goodness, this one was only soft and squishy, and not yet stinky! 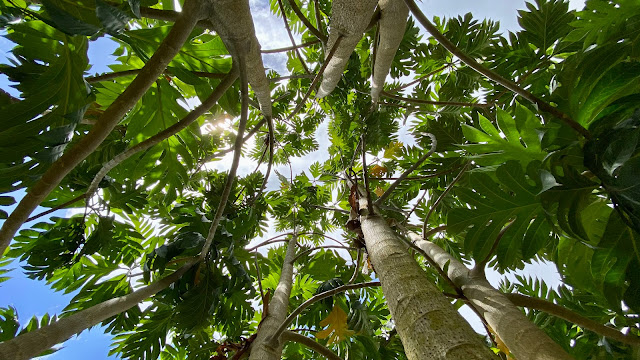 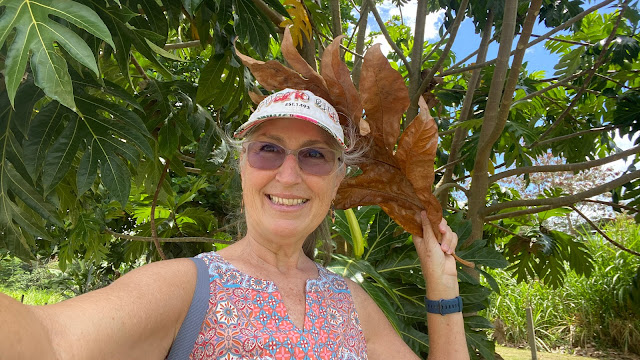 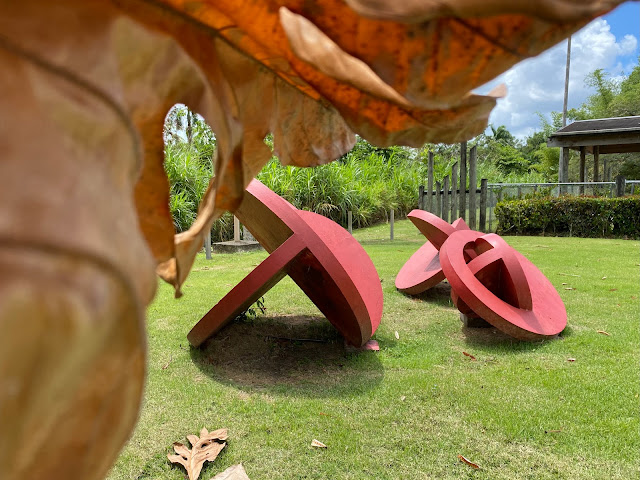 Cosmogony: Spheres that symbolize life and the beginning, perched on an environment of museum impact of light and color, creating a new universal space in the city of Caguas. In "Cosmogony" they merge
the experimental and the industrial, the urban and the ecological, in an attempt to humanize and poeticize industrial materials. A new aesthetic and utopian horizon.
“El salto del Río Caguitas”
Artist: Tomas Lara Franquis
(Cuban guest artist) 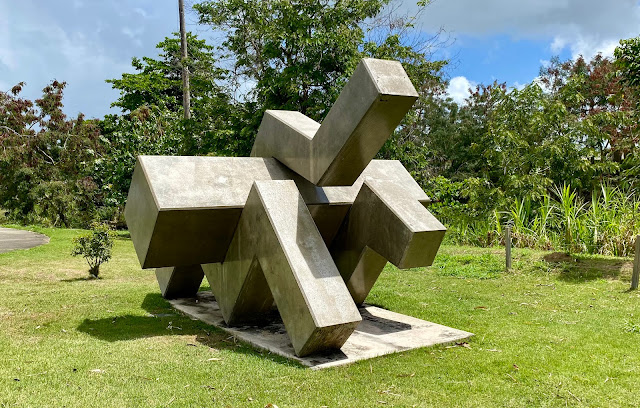 The Waterfall of the River Caguitas: Sculpture of a playful nature, denotes ease and freshness
with a marked sense of humor. The work is structured from four geometrizing elements, three of them symbolize the impetuous river current and the fourth is a supposed containment element, which
it is finally overtaken by the waters of the river. 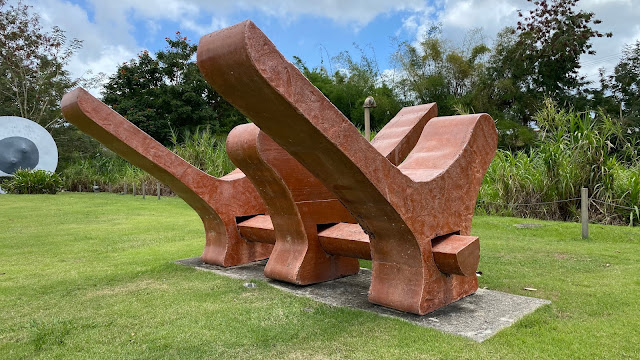 Osario: The present and the future is only possible by proudly looking at the past. The rivers have memory, in their waters they carry the history of the lands that cross and contain it. Osario is a fragment of a primitive and ancestral inhabitant of Cagüitas; tribute and testimony that man has always been here. 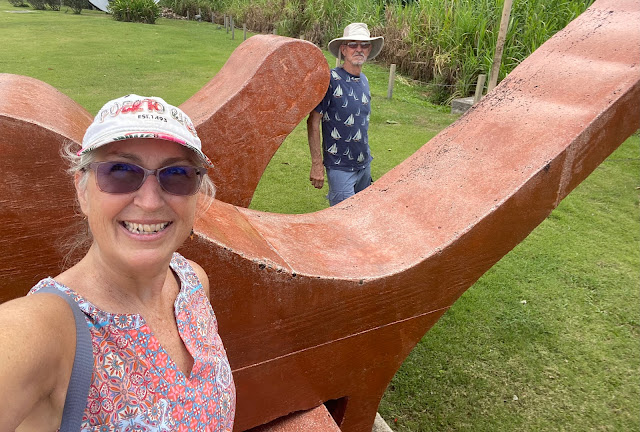 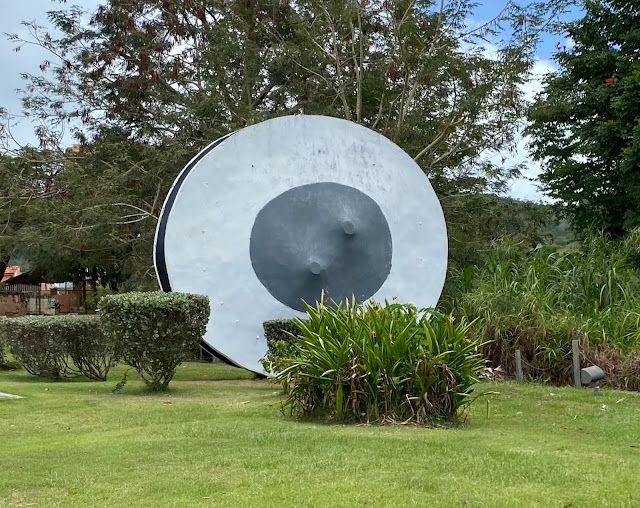 Moon 7: Lunar responds to knowledge that we have balance and concordance which regulates nature among planets, earth and moon. ′′ Lunar VII ′′ as expression artistic also tries to harmonize and seek match between these elements. 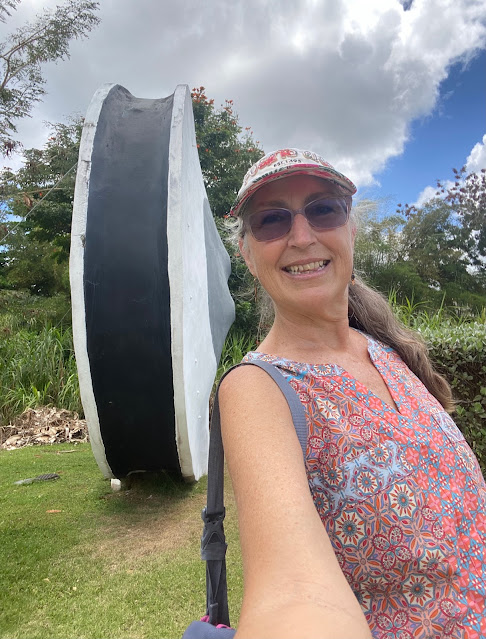 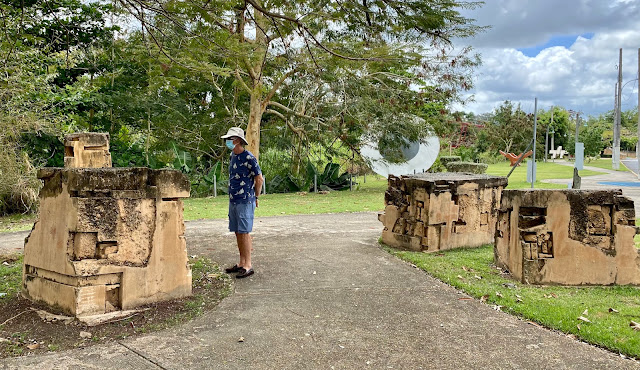 Of the demolished walls: garden of vestiges: Multiple archaeological layers make us up, architectures hidden under the earth, those already discovered, some in ruins, those built or under construction and others thought or dreamed of. Of the demolished walls: vestiges garden, consists of four modules in
reinforced and pigmented concrete that appear in the landscape as archaeological fragments. 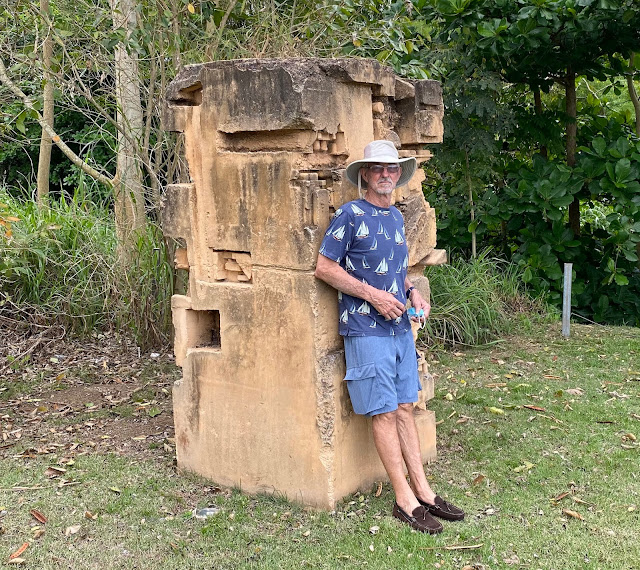 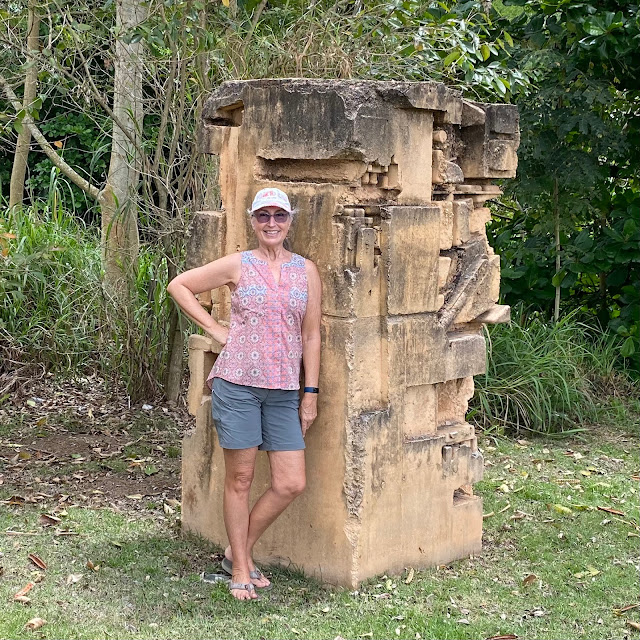 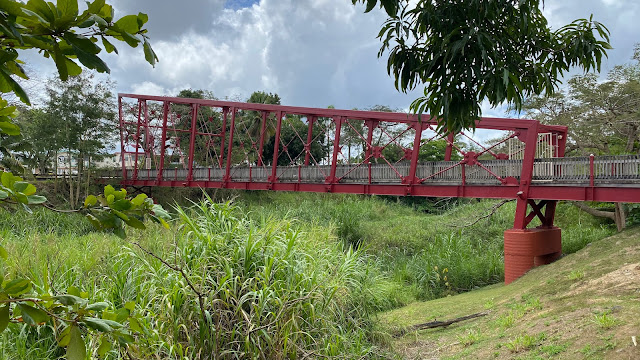 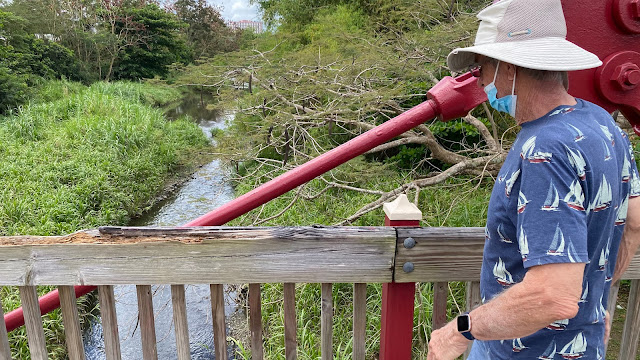 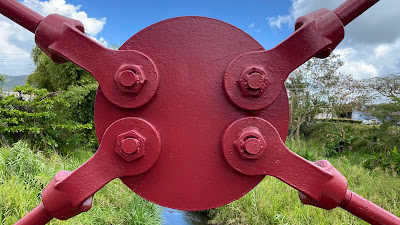 That was the last sculpture we saw here.  We backtracked to the car, and I set the Google Map to take me the five minute drive to Sam's Club.  Just as we began to leave the neighborhood, I saw one more!
“Tributo al Rio”
Artist: Dolores Ortiz
(Mexican guest artist)
2003 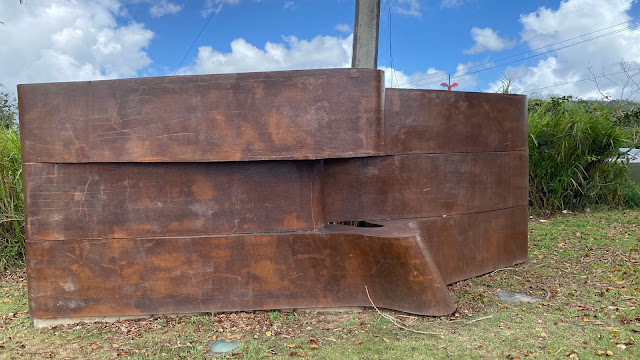 Tribute to the River: This sculpture is a tribute and a tribute to the Cagüitas River and nature, the sculptural project suggests with its forms undulating a continuous flow like the flow of the river, reflected in its forms a rhythmic cycle. 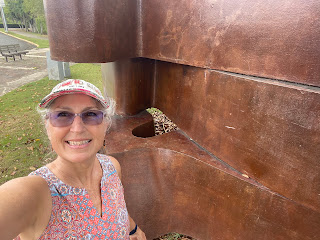 During the writing of this post, I discovered that there are several we did not find.  Maybe next visit we will come back with a new appreciation of what these pieces mean.  What an unexpected interlude this turned into.  You just never know when you'll find something magical in Puerto Rico!