As action packed and strenuous as the past two days have been... today was not.  Today, we took off on the road about an hour to the north of us, to check out the beach and possibly snorkel at popular Crash Boat Beach!  Don't ask me why they call it that.  The beach was neither crashy, nor particularly boaty... until it was.

But I'm getting ahead of myself!  First, I wanted to check out another beach that someone told me was good for sea glass.  I've got several marked for visiting, but we stopped at this one first.  I've never been to Playa Los Almendros before, but it was a nice easy-access beach.  There was public parking and some rental stands set up for water sports. The beach is very beautiful and it wasn't crowded on a weekday early... but there was no sea glass.  Not one scrap! 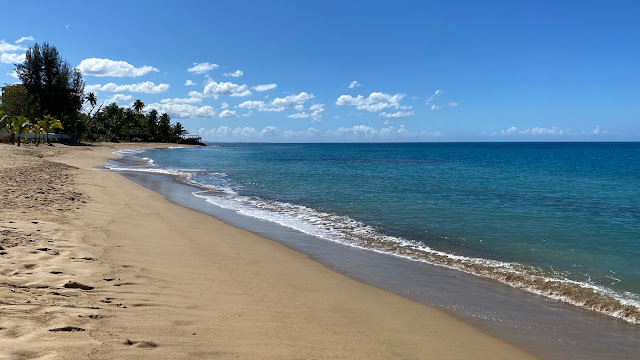 Maybe we'll try again some day, because even our own beach isn't always happy hunting.  But today, we moved on to a beach that I KNOW will pan out! Playa Parque Colón never disappoints.  We didn't stay more than 10 minutes and Sue says she has now more than doubled her entire sea glass collection!  I picked up a good handfull, being more picky than usual.  Here, you can afford to just go for the colors or the best tumbled pieces.  If I have to complain about something... I didn't find any good blue pieces today!

Sorry for the terrible video quality.  It was a bit of a scramble.  But you get the idea.  Leaving this beach, we began to notice more traffic.  It's Thursday Wednesday (who can keep track?), but it IS Puerto Rico, so the beaches will be starting to fill up!  So we made haste to our next stop, and today's destination, Crash Boat Beach!

As soon as we arrived and began setting up camp, another family showed up and plunked themselves down right in front of us.  RUDE! Just don't!  But after having been the entertainment already (we had difficulties putting up our shade tent and ended up ditching it, much to the amusement of a large group of tourists near us) we just decided to stay put and try to enjoy paradise with a blocked view.

It was very sunny when we arrived, and I was concerned that we would have trouble keeping cool with only the beach umbrella for shade. But Sue had her little personal chair umbrella, and shortly after we got settled, the clouds that are normal for afternoons on this side of the island arrived and cooled things off. They were nice for temperature regulation, but they dampened the stunning blues of the Atlantic so our photos aren't as awesome as they could have been.  I was also rather disinclined to get into the cold water for snorkeling.  Bruce went in for a while, and he was not as impressed as I had hoped, so Sue and I skipped the snorkeling all-together.

Wow!  Reading that back, I sure sound bitchy and spoiled rotten!  Well, maybe we are a little bit spoiled, living here in Paradise as we do.  We can afford to cherry-pick.  We did enjoy the day!  We even had a delicious and very UN-nutritious empanadilla and pincho de cerdo, WITH a Pina Colada, for lunch! 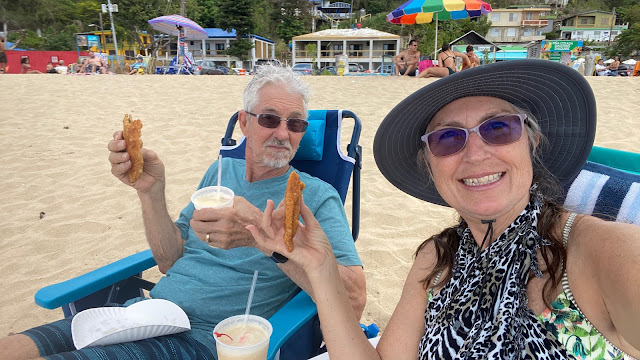 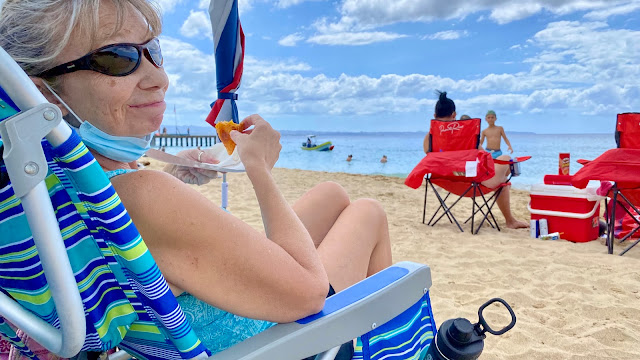 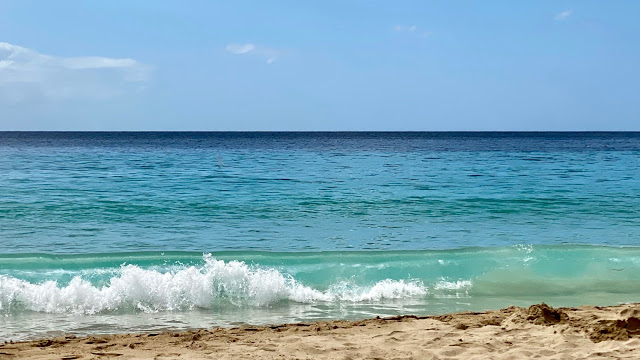 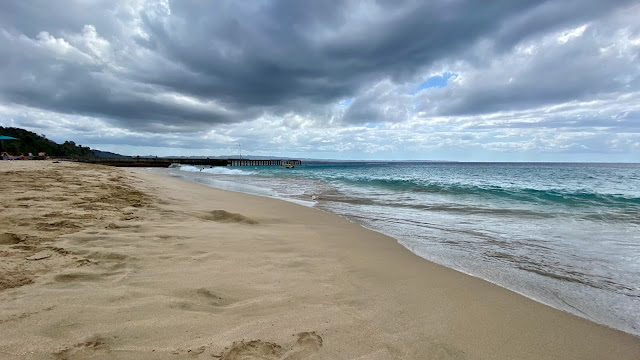 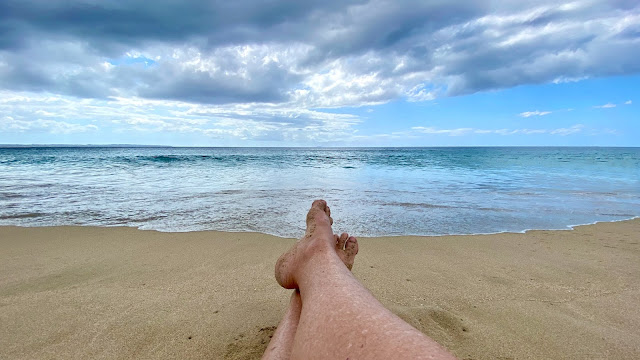 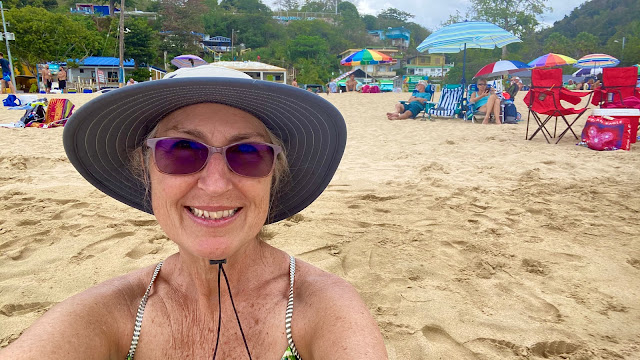 Having a day to just chillax was just what we needed after the activity of the previous two days.  Just because we're on vacation, doesn't mean we have to do something every minute.  Especially considering that we LIVE HERE!  And we can come back any time we wish!  All week long, Sue and I have continually reminded ourselves how fortunate we are to have done whatever it was that brought us here.

I went back to my chair and dried off.  Even though I had been in the water a couple of times, I didn't feel sticky or sandy.  Nice!  I reclined and closed my eyes, just listening to the happy sounds.  The waves gently breaking. The occasional bird call. Children chasing one another or a daddy snatching his kid up and running for the water. Far away music, not too loud.  Until a power boat showed up with a row of huge speakers blasting!  We all watched in horror as the boat cruised by, then backed in and threw out anchors fore and aft.  This kept their speakers aimed right at us!  Well, this day is over folks!  More than one group began packing it in.

It's OK though.  I really had been putting off the inevitable.  If we left right now, we would just exactly make it to the dinner place I have picked out on time! We all three changed clothes at the car.  Risqué I know! But we're Girls~on~the~Loose!!

I don't have any idea how I pick these places... but somehow I have a 100% track record for picking the good ones!  El Coral in Jayuda, a sleepy little waterfront restaurant with no redeeming qualities other than the view is unrestricted fabulous, the food is 5 Star, the dessert is sublime. Oh, and it's completely unpretentious... just the way I like it! 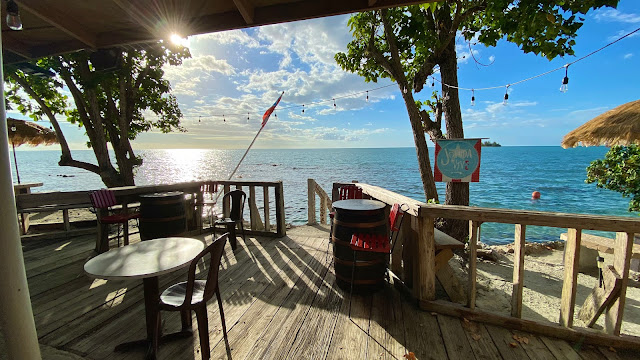 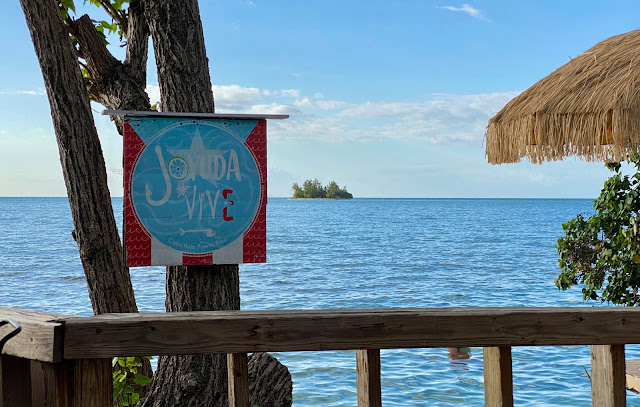 OMG we enjoyed a delicious meal, huge servings and perfectly attentive service.  Prices were very good and, while we may have been the object of a couple of glances wondering how we broke into this secret spot, we were completely welcomed and felt like we belonged here... with the other Locals! 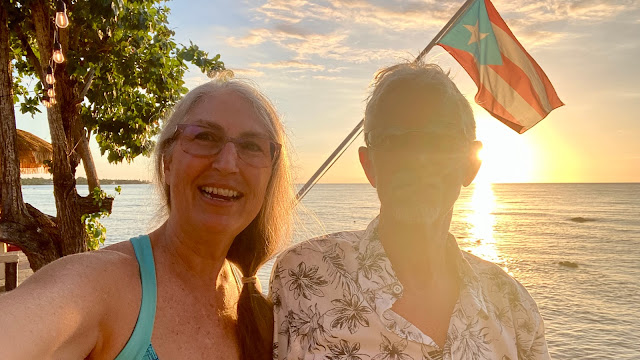 Well folks, that's another fabulous Staycation day down!  Don't hate us because we live here... well, OK, you might as well go ahead!  Because it's THAT AWESOME!  One more full day, and then the ride home to go!  Stay tuned!