Cruiser Life Revisited ~ And It Continues!

When our friends on Country Dancer left our Bay, we said our goodbyes, and pretty much figured it was over.  When a weather window opens, shore plans fall to the wayside. But sometimes, that weather window slams back shut without notice.  I swear I did no Voodoo that would adversely affect their weather window... but it didn't hurt my feelings any when we got the message saying that Jodi and Gary would be "stuck" in the anchorage at Puerto Real for at least a week!

After a one day delay (so that I could make sure I suffered no ill effects from my initial Covid vaccine), Bruce and I loaded up our car and made the drive to the far west side of the island once again.  It's been less than three weeks since we had our little staycation here, but we were happy to close up the house and do it all again!

We arrived before noon on Tuesday, and dove right back in to the Cruising lifestyle.  We changed into swimsuits and set off to explore the beaches within dinghy reach!  With our bow pointed out and around the point, then onward toward La Playita Beach, we were lured by a glimpse of white sand on one of the nearby cays.  Always up for an adventure, we diverted course and bounded across the crystal blue waters until depth became an issue.
As we reached the shallows near the shore, we pulled up the prop and motored more slowly, careful to pick a path across the sandy bottom so as not to damage any of the fragile seagrass bed.  We reached the shore and got out of the dinghy to pull it the last few feet to the sand.

It didn't look like much at first.  The sea bottom was very soft and impossible to walk.  We looked around and noticed that there were trails leading back into the brush, and all along the shore.  Off we went! 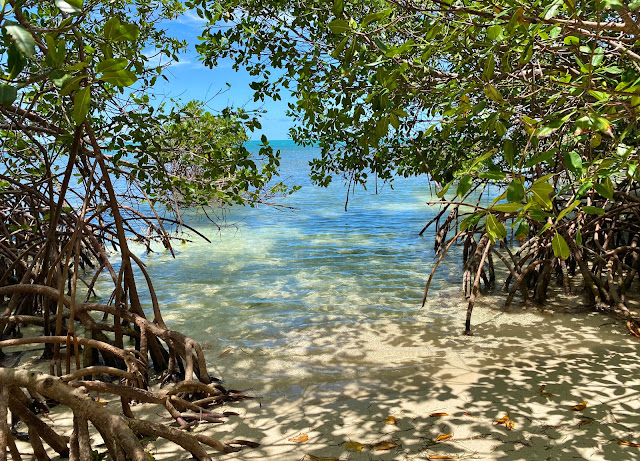 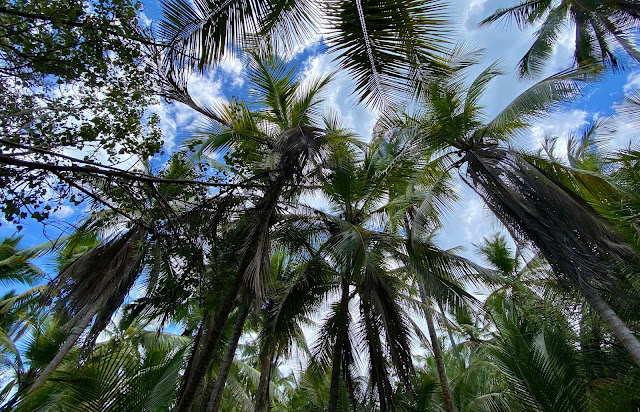 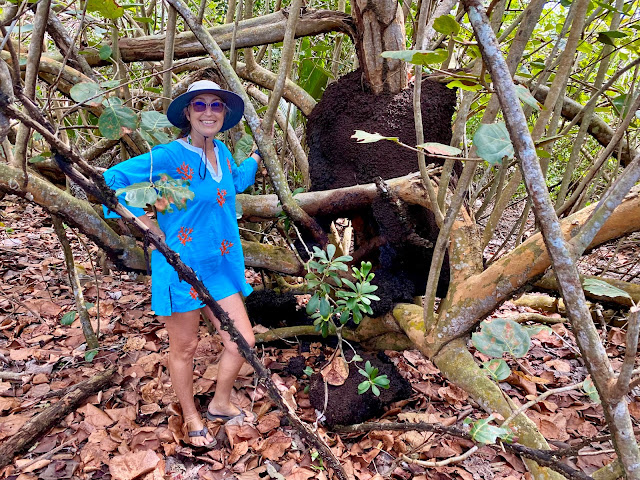 The trails are very well worn, giving us comfort. We walked the sun-dappled, shaded pathways through the palm, manchineel, sea grape, and mangrove trees.  There are a lot of broken trees, with more than a few huge termite nests, with trails showing the important demolition work these little creatures are doing here.

There are many side-trails leading to the interior as well as to these small sand beaches that punctuate the mangrove-lined coast. We kept going toward the rocky reef until we found a slightly larger beach, with a much better seabed for trekking out onto the tide-exposed reef. 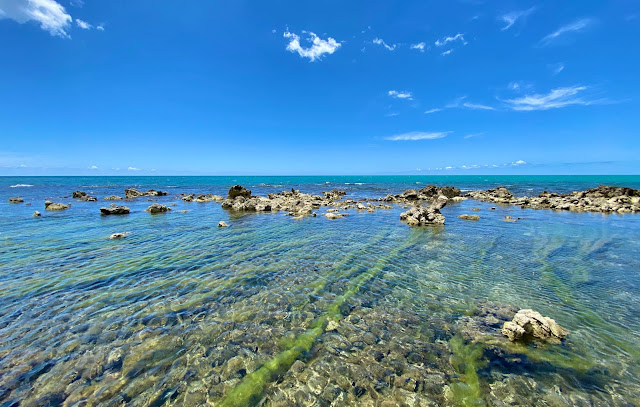 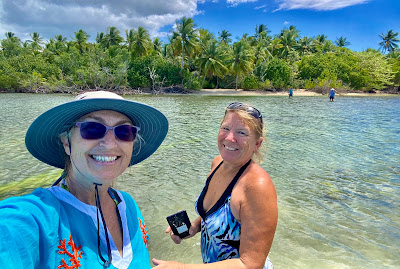 Jodi and I explored the reef, exposed by low tide. The water was only knee-deep, and there was no current.  Walking was a bit precarious, however, and we saw a few urchins that we studiously avoided.


We waded back to shore, and decided to continue on to see where this trail leads.  It was pleasant beneath the shade of so many trees, and good to be adventuring in places less accessible by land. Although the trails leading to Punta Ostiones can be reached by car, I'm sure we never would have found it! 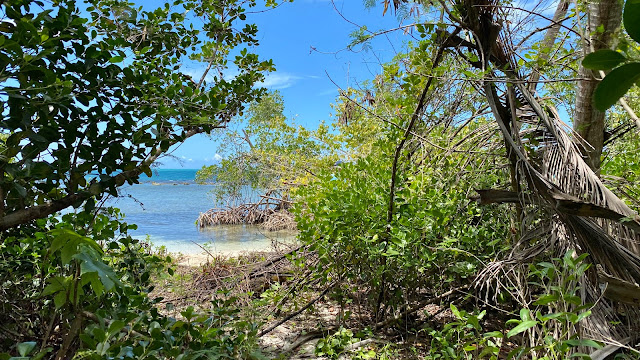 Eventually, patience wore thin, and the men suggested we go back the other way.  They would take the dinghy back around and pick us up at the other end of the trail, so that us girls could continue our exploration ashore. 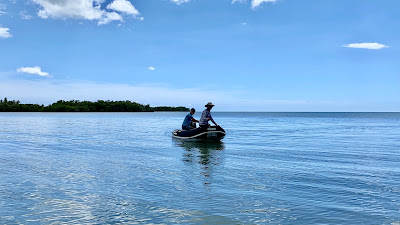 Very quickly, this trail seemed to become a bit more rugged, and less traveled.  We rounded a point and saw that what we thought would be our beach, was yet another indentation in the coastline.  Just as we decided to bail out of this excursion, we spotted the men motoring around the point.  We waived them over and begged for a ride!

We scrambled into the dinghy and enjoyed the slow look at the mangrove-lined coastline.  I'm sure the mangroves had been severely damaged by the hurricanes in 2017, but it looks like they are recovering nicely! During our dinghy ride out, we opted to go outside of these small cays, hoping for deeper water.  Now, the winds were picking up and it made our decision to try the narrow waterways between the cays and the mainland seem the preferred route.  We sure are glad we decided to brave it, because it was so much fun navigating to find the deeper water, while getting a prime view of the natural area all around us. 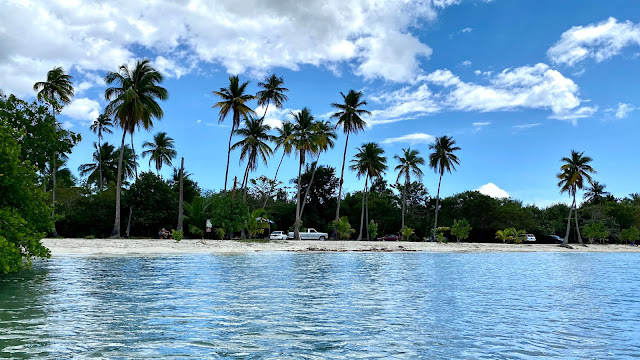 Just around the next point, we found our beach, La Playita! There were already a few families enjoying this calm little strip of beach, even though it was a Tuesday.  The palms waived invitingly as we motored closer, then jumped out to drag the dinghy ashore once again.  We took our snacks and found a covered seating area to have our little lunch. 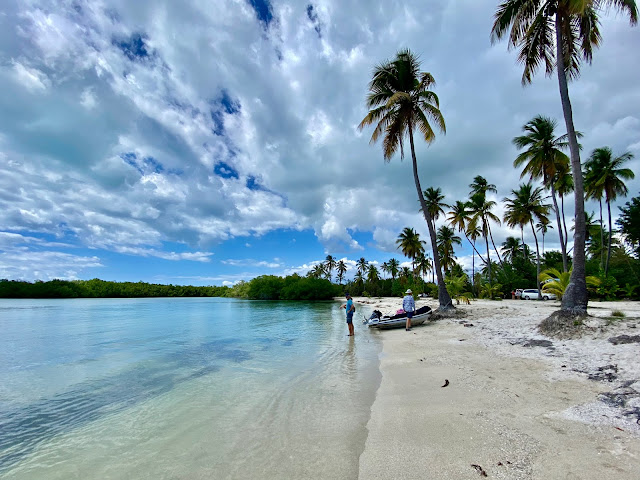 After eating, we tried out the trails at the end of this beach, but they ended rather abruptly, so we returned to the boat and set off through the remaining route between the cays to our anchorage.

We had a moment of concern where it looked like we would have to backtrack, but we found a deeper channel that led to the open water and back to our boat! 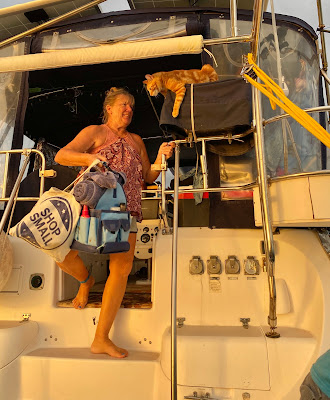 Back onboard, we waited out a passing rainshower, then packed up our shower gear and headed ashore for another taste of the Cruising lifestyle... shore showers!

This brought back so many memories for us, and it emphasized how luxurious our lives are since we became CLODS.  While both have their perks, this little step back in time is precious to us! 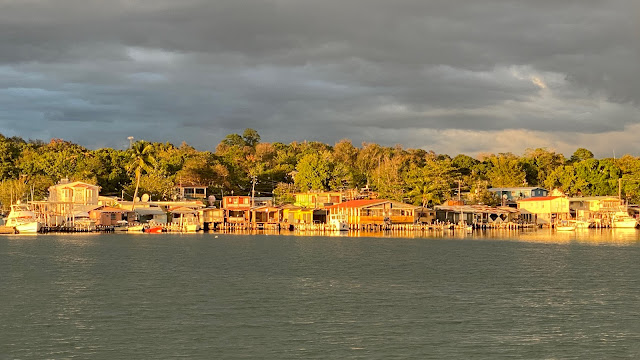 Relaxing in the cockpit after a day of exploring, we slipped right back into this lifestyle as if we had never left.  While it wasn't our own boat, it was just as enjoyable, as we looked forward to the coming night, when we would rest our weary heads in a gently rocking berth. What a great day it has been, and we're excited for the days to come before we go back to our regular island life... 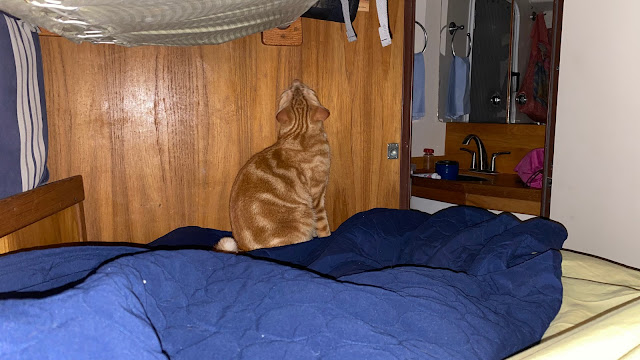 One more treat was in store for us this night... visits from the feline crew!  Goodnight! See you in the morning for another day of island adventures!