We love showing off our island.  Having Jodi and Gary here, we've seen some new places, but when we see our favorite places through new eyes, we get the biggest kick!  So many times during their time here, I've had to remind myself that while we share the kinship of being Cruisers, they have not experienced much of what Puerto Rico has to offer.  With every new exclamation of surprise, or gasp in awe, my heart swells for our beautiful Isla del Encanto.
It's so easy to slip right back into cruising life.  We spent so many years sleeping while rocking gently at anchor, and waking up to the sunrise and watching local fishermen go about their business. It's a life lived close to nature, and with very few luxuries.  We have been reminded of the things we lived without, and it renews our appreciation of the amenities we now almost take for granted as CLODS. 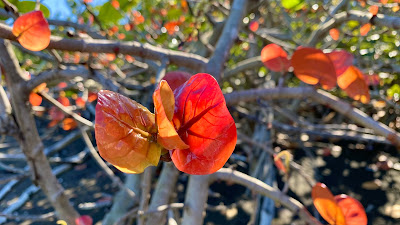 This morning, Gary had to spend some time earning a living, so Jodi, Bruce and I took off to entertain ourselves for a few hours.  We returned to the black sand beach we found this week, only not so far north this time, and spent some time doing what we girls love best... beach combing! 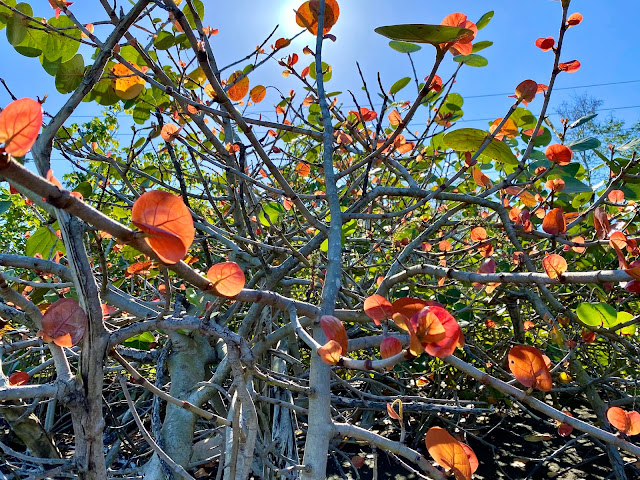 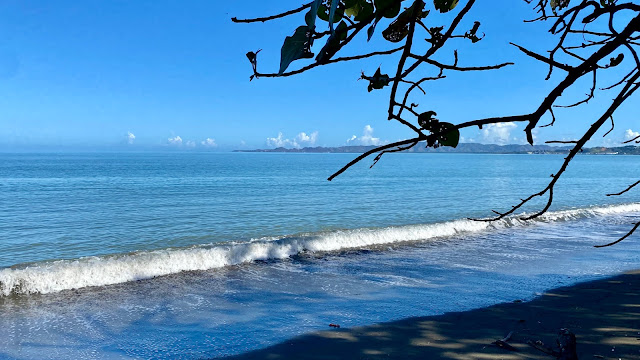 Pretty soon, Gary called to tell us he was done working and we hurried back to the Marina to collect him, and continue on with our day!  Jodi had posted a photo of Faro Los Morrillos as they passed by on the water.  Today we would show them what these dramatic cliffs, and the beautiful Cabo Rojo Lighthouse look like by land!

Driving out on the narrow strip of marshy land between the salt flats and the Caribbean sea, I was once again amazed at how different this place can be, even though I've been here a dozen times or more.  There had been some rain, making the drive a little muddy. Thanks again to our AWD Honda! We stopped briefly at the salt museum, which was closed, as was the observation tower.  I waited while our friends got out and went over to take a look at the salt mountain, then we moved on over to the salt plans.
Today, the sections were empty, with the exception of one that was in the process of being refilled with salt water pumped from the sea.  We walked out to get a closer look.  Gary went over to speak to a worker who was working in some sort of machine.  Must have been all in Spanish, because when Gary returned to report, the only thing he caught was "45 days". We figured that was the number of days it takes to evaporate the pans so that the salt can be harvested.

I absolutely can not resist these jiggling, poofing bubbles!  I can't watch that without giggling! The empty pans still had some salt on the bottom in the lower areas, but I am completely amazed that they can get all of the salt off of the structures and most from the ground.  Simply amazing!  Hopefully some day, we will come when all of that is going on!! 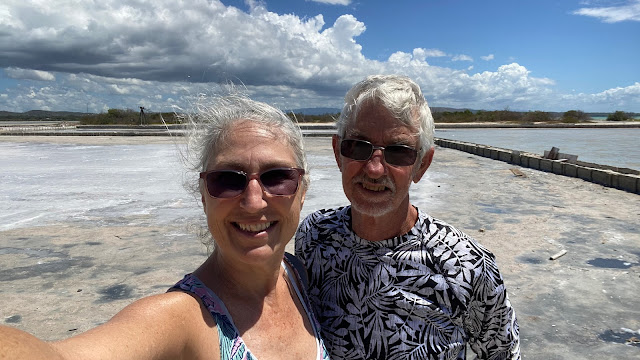 Walking back to the car, I noticed that the muddy dirt beneath our feet was sparkling like diamonds with the salt saturation.  Simply amazing!
We made the short drive up to the parking area for Faro Los Morillos, then began the hike up in the mid-day sun.  It is already warmer than it was during our last visit, but the stiff breeze kept us cool enough.  I'm pretty sure this is the windiest we've ever experienced here.
Funny how new eyes bring a new perspective.  In all of the times we've been here, we have never continued on past the lighthouse to peer over the cliff at Playa Sucia! It's another view from the dramatic cliffs, and the wind drove the sea into the rocks far below with a violent surge! It was completely wild up there, and it made my heart beat a little faster. 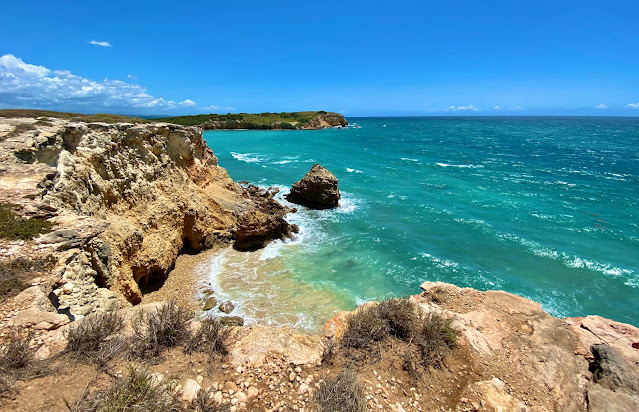 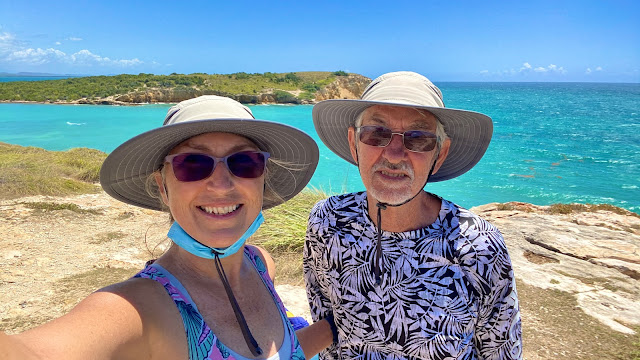 On our way to the more familiar part of the cliff, I noticed that from this perspective, there were several huge pieces of cliff that had once been overhang.  I am pretty sure that I even have a photo of our friend Kathy sitting on the one remaining ledge with her feet dangling.  You could see the cracks in the ground as you near the cliff... and in one place, it was actually partially leaning.  Stay back from the edge!  Recent earthquakes are wreaking havoc on our shoreline! 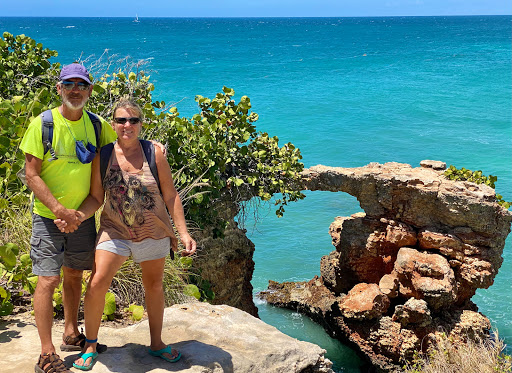 We continued on, blown by the wind, and enjoying the fabulously clear, sunny Carribbean day!  Next photo op, the stunning Puente de Piedra, one of our remaining natural rock bridges.  Now it has been blocked off so that people don't try to walk out on it.  That is a thing of the past.  Now we must enjoy it from the safety of solid ground. 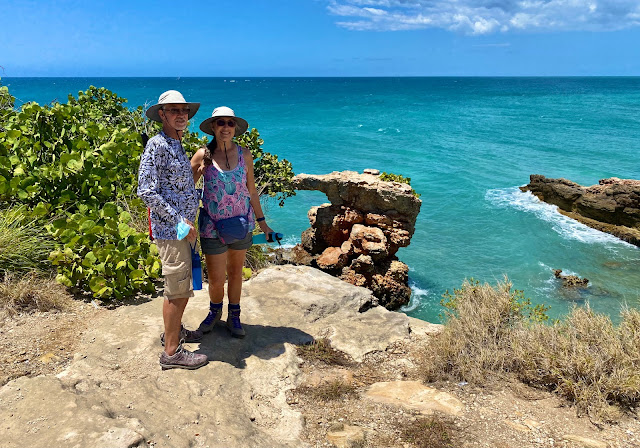 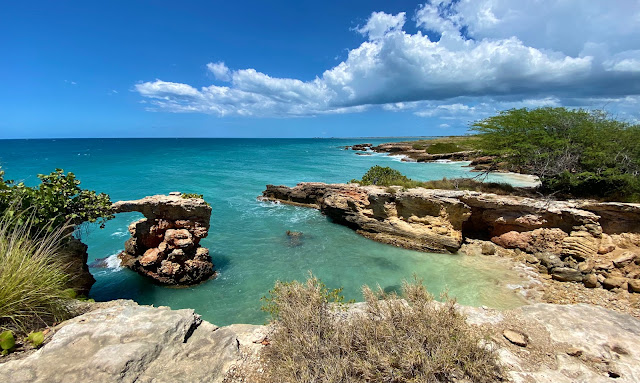 We continued walking on down the coast path, until we reached the small chain of sandy beaches north of the natural bridge cove.  I had hoped we would be able to go down onto the sand and hunt for caves today, but the seas were huge, crashing up onto the sand, making it impossible to attempt further exploration. 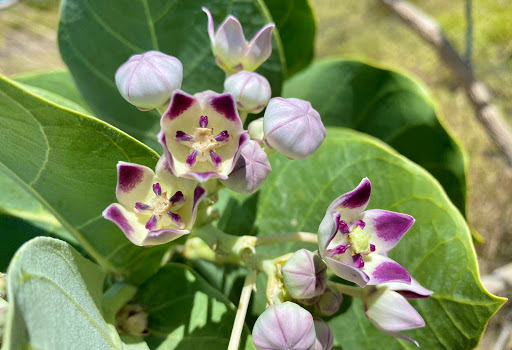 On the walk back to the car, I took some more flower photos.  During our visit here three weeks ago with our neighbor, I told her about how sometimes, this coastal plane has some kind of blooming bush that has flowers so small you can hardly see them, but the scent of them fills the air.  Today, those flowers were beginning to bloom. 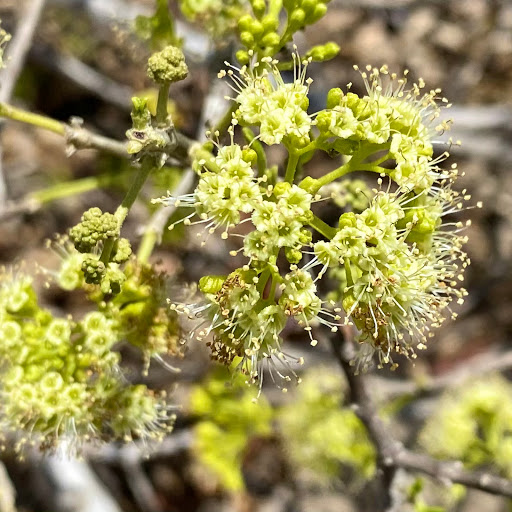 As we walked along, we would pass through a downwind spot, full of the thick, honey scent.  Going back, I followed my nose until I found the culprit.  It's actually a rather large bush, or small brushy tree.  It's covered with few leaves, but so many of these tiny flowers.  The bees were busy making themselves useful!
Further inquiries have brought me to believe this MIGHT be the "Birdcatcher Tree", or the Pisonia horneae, but it is almost certainly one of the Pisonia trees, and I think the locals call it Corcho! 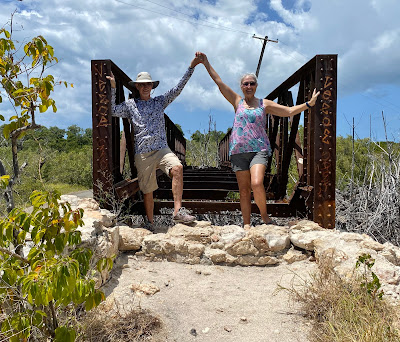 Once more we loaded up and began the drive back, but the fun wasn't over!  We stopped for some pictures of the old railroad bridge! I don't know why I've never stopped, maybe just needed the right partners in adventure, or maybe someone to take the photos!! 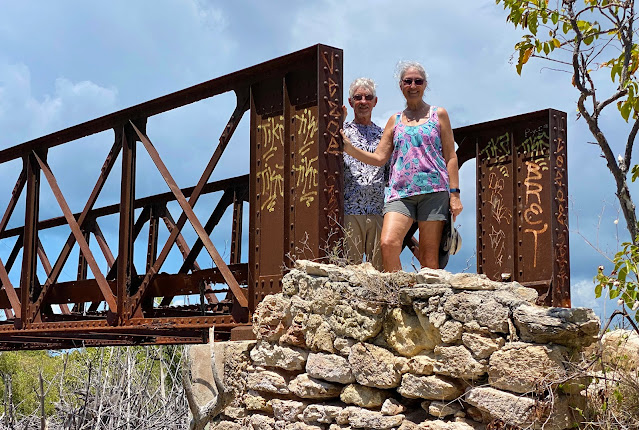 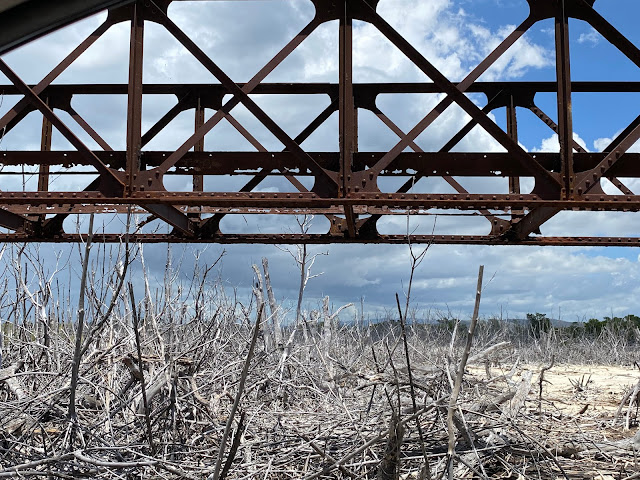 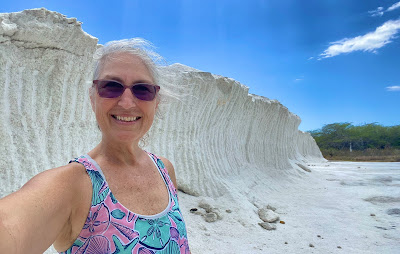 Feeling reckless after the bridge climb... I decided that I needed better photos of the salt piles, so we stopped again.
They look fluffy, but the salt is very firmly packed.  I would imagine that moisture and rain sort of weld the salt together, but at the bottom, you can still scoop up hand-fulls of salt crystals like so much warm and salty snow! 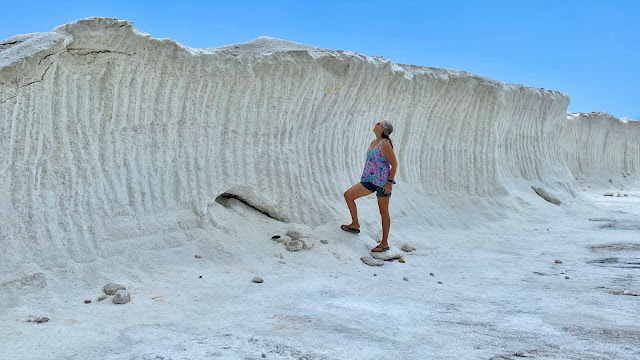 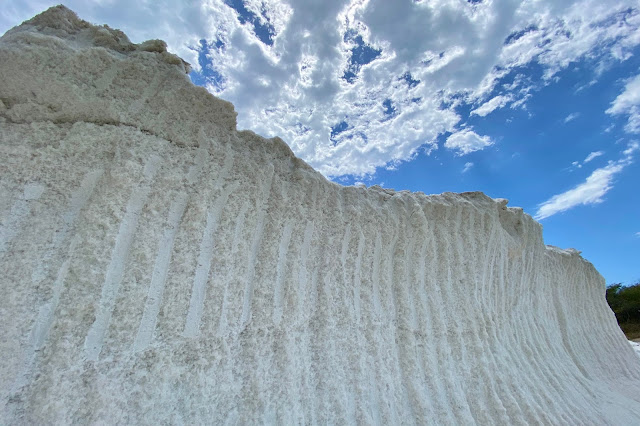 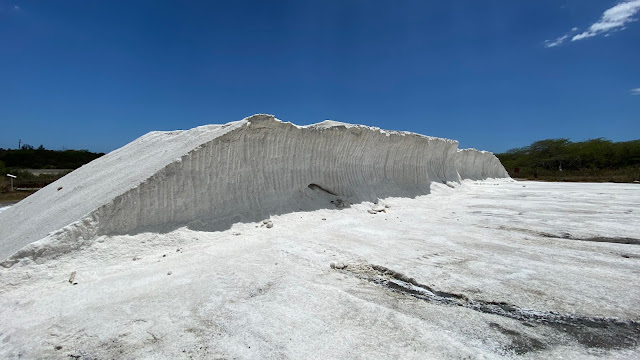 What a fun day!  Looking at the time, it was getting later in the afternoon, lunchtime really, but today we had not brought lunches!  I consulted Google and decided that we could make the nearly hour drive to get some of the BEST Empanadillas on the island!  And I would show them one more favorite beach where we could have our little picnic. 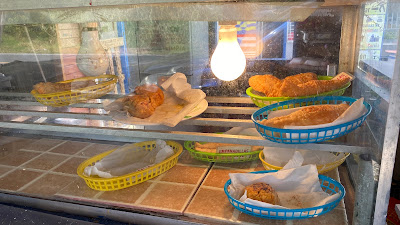 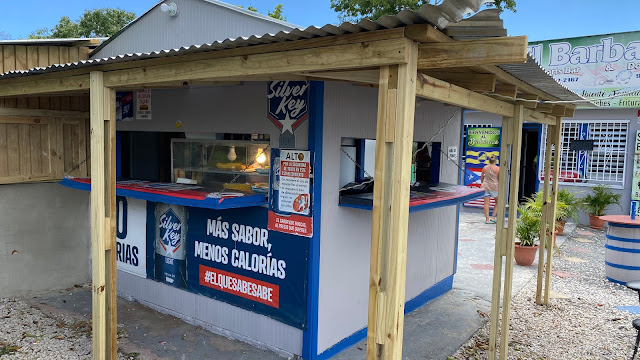 This little "locals" spot is called El Barbarazo, and we waited patiently while the lady made us all FRESH Emanadillas!  We had beef, chicken, and my favorite, CRAB!  So full of delicious crab meat!  The short drive to the beach was torture as the smells tantalized our noses.
We enjoyed our picnic, took a quick spin on the beach, but no sea glass today.  And that, ladies and gents, concludes our island tour! 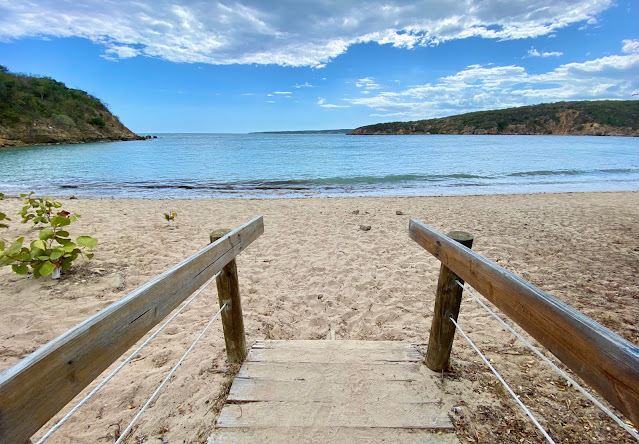 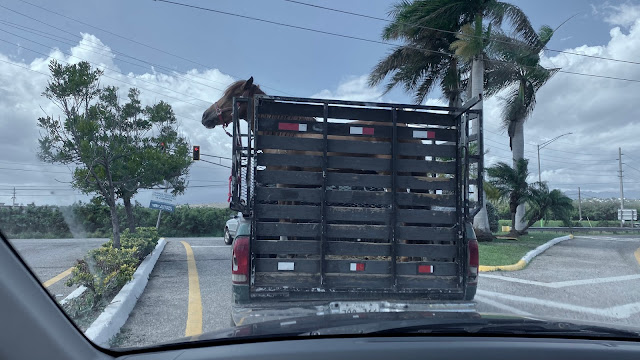 Back at the boat, we took our showers.  I think it's time for me to go home, because judging from my serious lack of organization skills (didn't get to shore with all the shower stuff), my poor brain is on overload!  Maybe it's side effects from the covid vaccine, maybe it's just the fact that we've been trying to pack in as much as we possibly could before we go home, but whatever it is, I'm tired and can't seem to form a lucid thought!
Luckily, I didn't have to!  Once again, we settled into a quiet evening in the cockpit watching the intermittent rainfall that began at just the right time.  Jodi didn't need to make us any dinner after those late-day Empanadillas, but she put out a bunch of snack foods that we all grazed upon.  We were all ready for an early night. 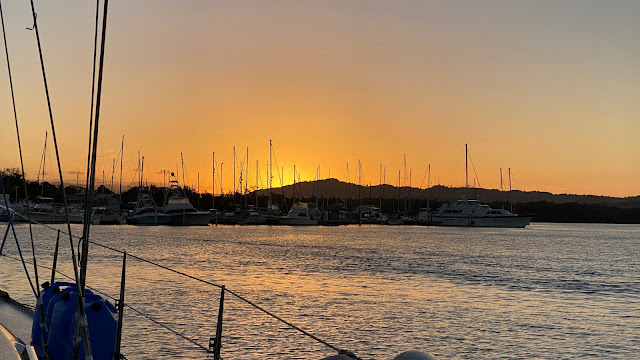 The next morning, we woke up to greet the sunrise from away. I took Jodi for one more grocery run, and then we said our goodbyes as the anchorage began to fill up.  By the time we arrived at home, Jodi said there were six more boats in the anchorage!  Well, I guess they'll have plenty of people to fill their days while they wait for a weather window to leave Puerto Rico.
Thanks SO MUCH to you both, for allowing us to stay with you on the beautiful Country Dancer, and to experience again, the cruising lifestyle.  We can't wait for you to come back and continue exploring our Island home!