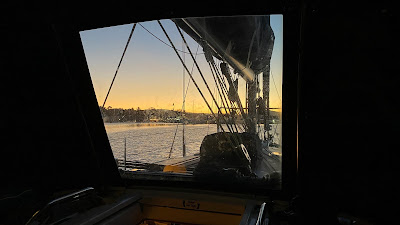 Ahhh, waking up on the boat in the early morning before sunrise... There's nothing like it.  And we have missed it.  I had no idea when we concocted this adventure, that we would be treated so well! Jodi made us coffee and breakfast while we lounged in the cockpit every morning.  I tried to help, but she said she had a system, and a "one butt galley"!  This, I understand, but still I felt totally decadent just sitting there being waited upon, hand and foot!
We hope that, as former boat people, we would be relatively easy guests.  But even so, it's a small space and having people onboard is a lot of work, so we thank you again Jodi and Gary for taking such exceptional care of us so that we could simply soak up the ambiance and enjoy being back on a boat again!
Today, we thought about going for a boat ride.  But the weather was not cooperative during our time here, so we made plans to run the roads!  I had a couple of places I wanted to try to find, so we packed a lunch and took off for the mountains! I put Charco El Pilon into my Google Maps and away we went! This took us first, through nearby Cabo Rojo, where we stopped to visit a little thrift store we found on a previous trek.  Then we moved on to the little town of San German. Gary and Jodi are the perfect exploration buddies for us, because they like many of the same things, and they're totally fine with side trips!  I took us through the narrow and steep streets to show them another of my favorite Ceiba trees!  Ceiba de la Libertad is not as big as MY ceiba, but it's quite a wonder, so we got out and took a look! 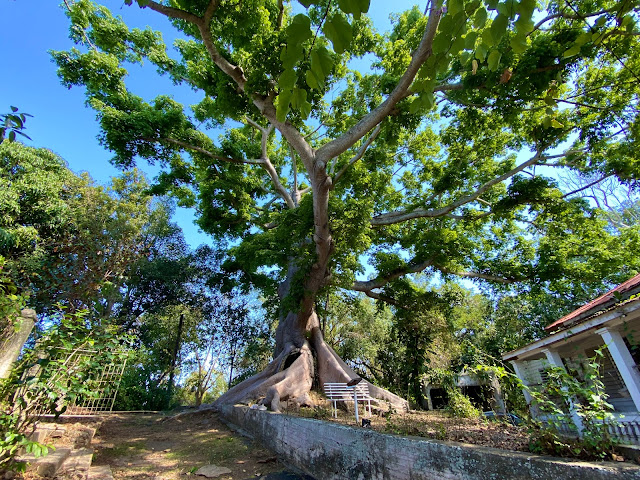 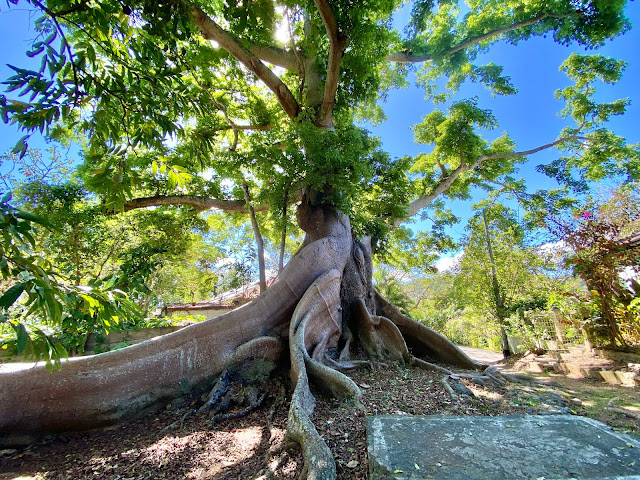 It's always fun to just wander, and we went from civilization to mountain-goat territory very quickly on PR362.  Our car has all wheel drive, but even so, when we wind up and up and up, and the narrow paved road turns to a dirt space-launch... my nerves deserted me.  We tried to find a second place, Bosque Estatal de Maricao, but ended up in a mountain neighborhood where I got out and asked for directions.  To get where I wanted to go, we would have to backtrack a long distance, and try again on another possibly-treacherous road (PR119)... so we abandoned that plan.  It's about the journey, not the destination, so when we got close to one of the numerous mountain streams, I pulled over and we had a little look-see! 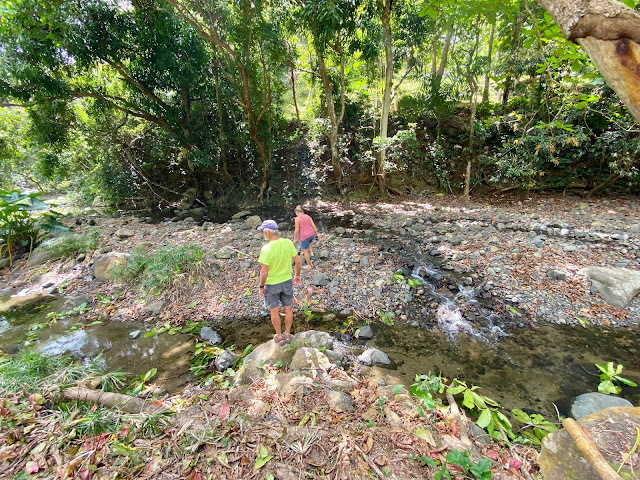 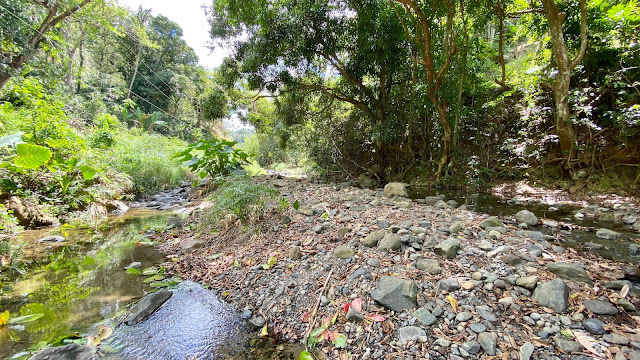 Just the drive in the mountains was fun, and we got to see a new part of the island.  Next time, I'll be more prepared!!  But wait, this day is not over yet!  Just because a plan didn't pan out, doesn't mean we don't have a backup!  After inserting a quick trip to Sam's Club so that our friends could walk the aisles in wonder, feeling like they had been on another planet... we headed for a place along the coast to have a little picnic. Jodi picked out some picnic tables on a black sand beach.  Yes please!  We parked and had our delightful little picnic, complete with Gary remarking on the irony that a group of people who live(ed) on the water, would naturally gravitate back to that water for entertainment.  Well of course! What's your point??? 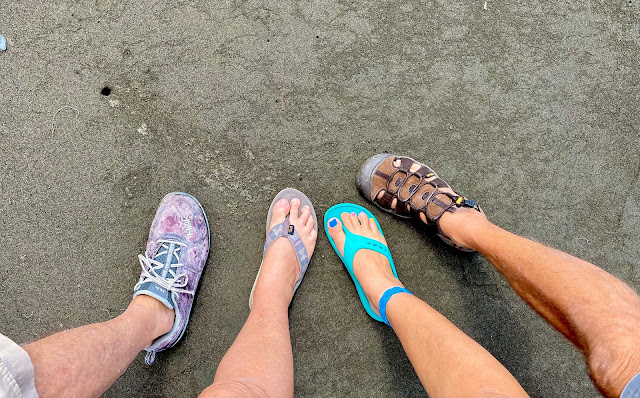 We walked the beach for a bit, finding some bits of sea glass, most of which weren't quite "ready", but there were some shells and interesting driftwood there as well.  But we must press on to find more adventure! 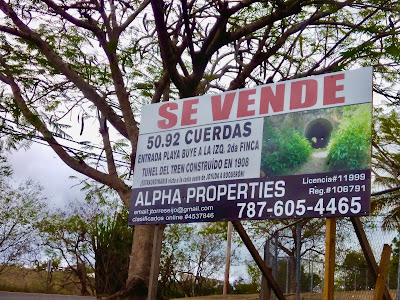 We've had sustenance, and with energy renewed, we set off to find another new place for us.  When we visited this area three weeks ago, we were VERY close to the Túnel del Tren Quaniquilla, but never found the entrance to the trail.  Gary had some idea of where to look, so we put that into the Google Map and arrived to find no obvious trailhead. There were a couple of old guys sitting around, so I went over to ask directions.  The older gentleman knew what we were looking for, and gave me directions.  Turns out, the entrance was just a minute or so away, and we had passed it many times while staying here last month! AND, there was a "for sale" sign with a PICTURE of the tunnel on it!  SMH...
In minutes, we were slowly motoring THROUGH a mountain, between two sheer blasted rock walls, with barely enough room for the car, and no idea what we would find on the other side.  Always hopeful, I saw something at the end of the path that I though was a car... turned out, it was a cow!  But, somehow, things always turn out OK, and we found plenty of room at the other end to park, and continue our adventure!

After suiting up in our hiking garb, we set off along a fence line on the well-worn path.  HUGE Iguana dashed and darted out of our way on the not too distant trail.  It was a little creepy, but with safety in numbers, we forged on to discovery! 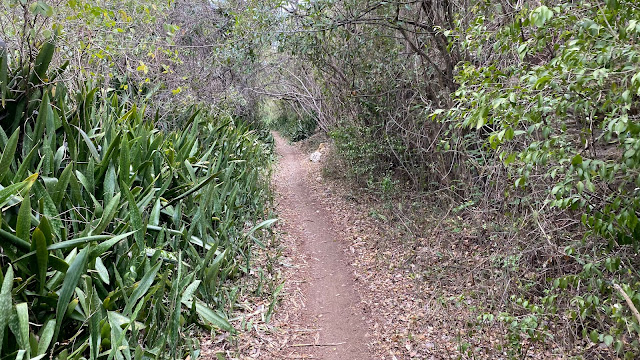 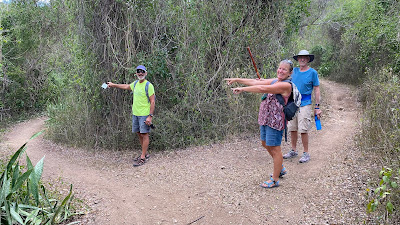 Soon, we came to a clearing where the trail split in two.  I consulted the Google Map and could see that the right side path was the more distinct and worn one, with the path to the left being obscured by trees.  I voted to go right, and so the others followed me.  The trail made a relatively steep incline, and we could peer through the trees to see the lower trail in places.  Eventually, another look at the Google told us that we had passed the tunnel.  Never follow me, people.  I totally don't know what I'm doing out here!!
So, we backtracked and took the other trail, which led quickly to our destination! This time, Jodi and Gary led the way!  Guess I'm FIRED as tour guide!! 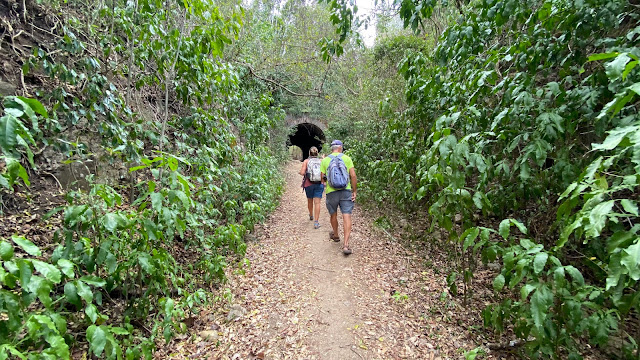 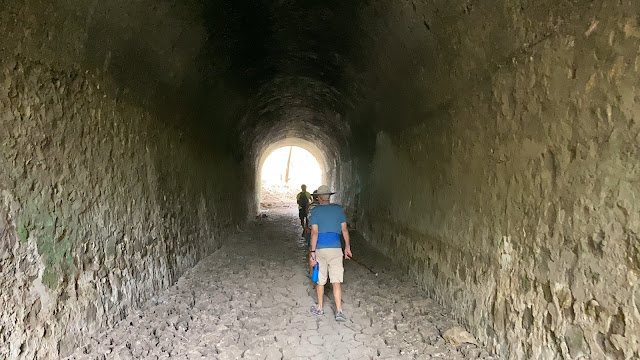 What an awesome island this is!!!  If this was in the US proper, it would be a money-making scheme for sure!  Here, we can just bumble around and find these treasures and enjoy them at leisure!  The hike in was nice, and after we walked through the tunnel, and braved the ferocious BAT!!!, we continued on through the other side for a while. 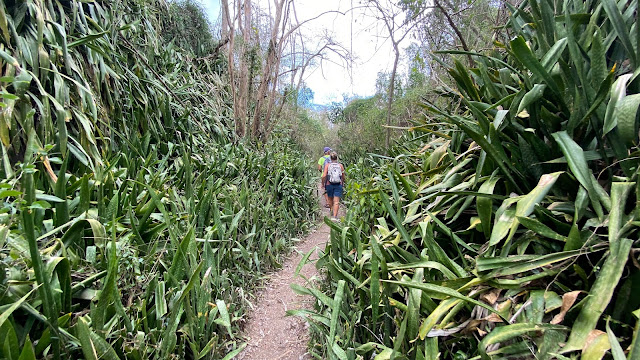 Very soon we crossed the path that we had been on in the first place.  This tunnel trail loops around and rejoins the main trail, which continues on.  Looking at it on Google maps, it appears that this leads to the Cueva Pirata Cofresi area, which we explored on our last trip here.  Jodi and Gary were keen to continue on, but it was already mid afternoon and they will be here for a while, so they can come back and finish this hike with other Cruisers who are beginning to filter into the anchorage. 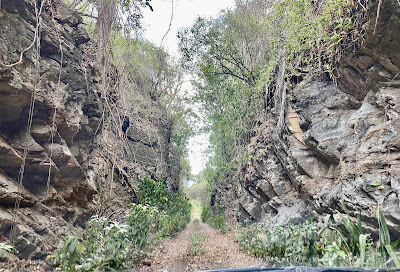 So, we took the loop and rested on our laurels for today.
Back in the car, the return through the cut was every bit as exciting, but without the element of uncertainty.  We made it! The measure of every excursion is how close we came to thinking we were going to die! Once again, we snatched victory from the jaws of death! AND added another exciting spot to my Island-Guide repertoire.
We headed back to the boat, a little sweaty and tired, but totally exhilarated by the day's finds.  I was still a little miffed that I had been unable to find those first two spots.  But I will be back!  We opted for skipping the shore shower, and just spruced ourselves up on the boat, then collapsed in the cockpit while Jodi, who seems to possess boundless energy, prepared and served a delicious dinner for us once again!  I know we don't deserve such riches, but we thank you again, all the same!  Tomorrow, we will be off on yet another adventure, sightseeing and exploring the west side of our island... but tonight, we turned in early, revisiting the joys of boat sleep again!  Stay tuned folks!
Curious? Good information here...