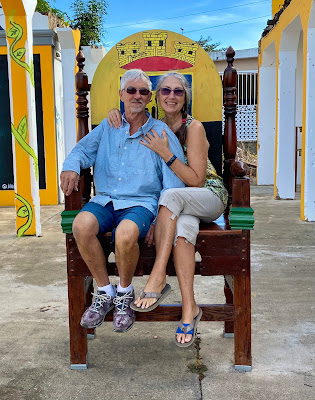 Today, as promised, we set out on a grand adventure.  I've got a whole itinerary arranged, complete with a mix of our old favorites, with a fair sprinkling of new things for us to see in the mix.  Having a new set of eyes to show the wonders of Puerto Rico makes our enjoyment of these excursions exponentially better!  All along the way, the exclamations and gasps emanating from the back seat gave me the greatest kick as we raced along the steep and winding roads of my beloved Isla del Encanto.

Since our friends have seen very little of Puerto Rico, nothing was too mundane for them.  They, like us, enjoy ALL of the things, not just the flashy touristy stuff.  We started out showing them our own little town of Arroyo.  Our Malecon boasts a nice collection of local artist's murals, and this new chair! 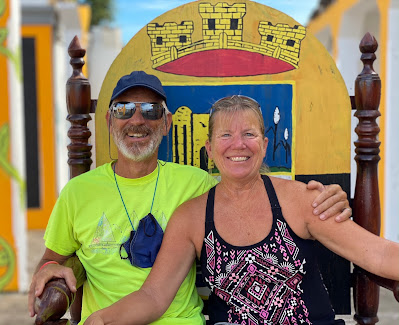 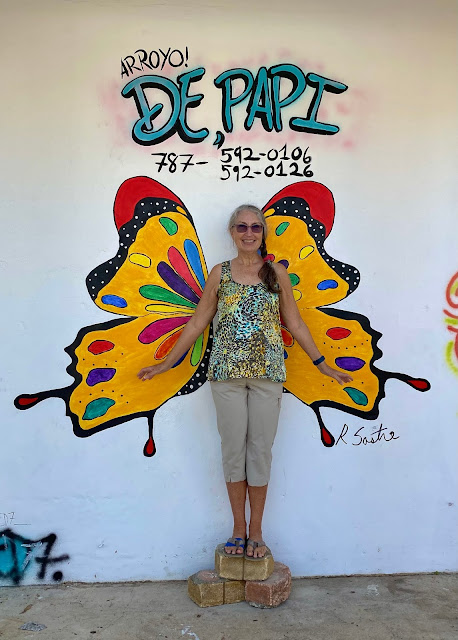 The drive through old town Arroyo took us past so many old homes that closely line the narrow streets and ended near the Malecon, where we parked and took a little stroll.  There are some new things that we haven't seen yet, so it was a complete delight for us as well. 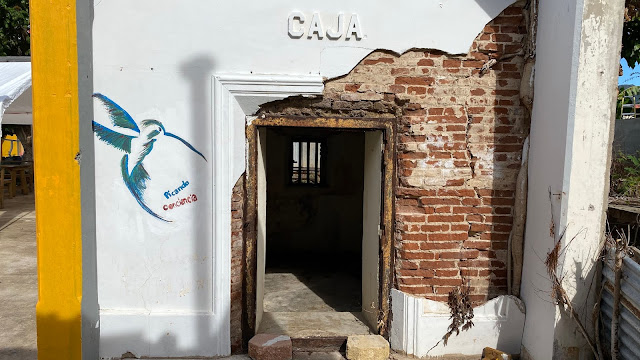 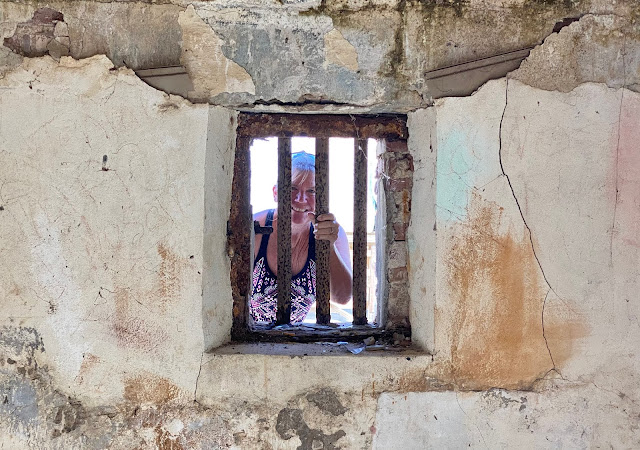 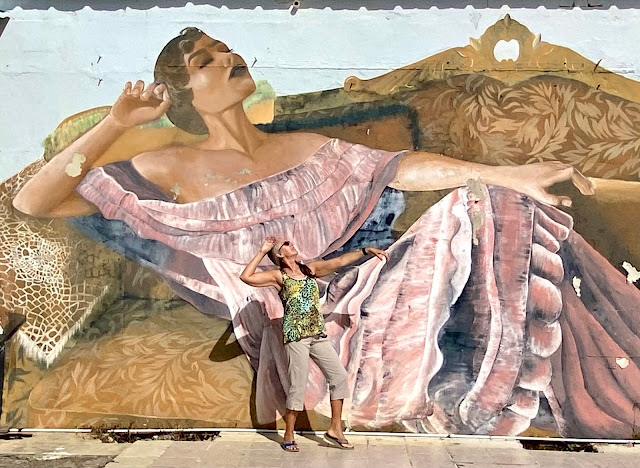 Back in the car, we took off to check out a place we've never seen.  It's just outside of the neighboring town of Guayama.  Very soon, we left the relative flat of the coastal area, and began to climb into the mountains.  Stunning views of the valley below, with the Caribbean Sea beyond, kept us entertained as we wound ever upward, until we suddenly arrived at our destination!
How I have missed this treasure, so close to our home, for so long, is a mystery to me.  How many other things am I missing??? I must say that we have avoided traveling on highway 15 due to reports of mudslides from recent rains.  We found evidence of these along the way, some with concrete barriers set up where the road diverts around them, and some more recent with roadblocks warning us away.  The piles of rock and dirt along the roadside are warning enough!
Antiguo Horno de Cal (old lime kiln), is unique in that it is so well preserved.  The ravages of time have practically left this ruin alone.  It was reportedly build in 1890-91, and used in the production of lime for construction of highway 15, as well as agricultural use in the surrounding area. 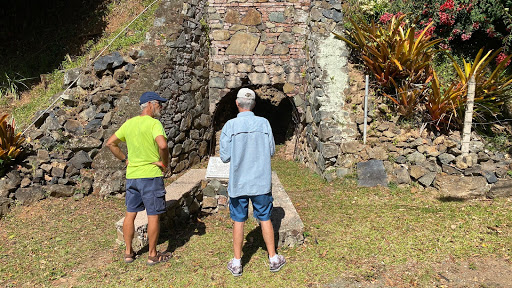 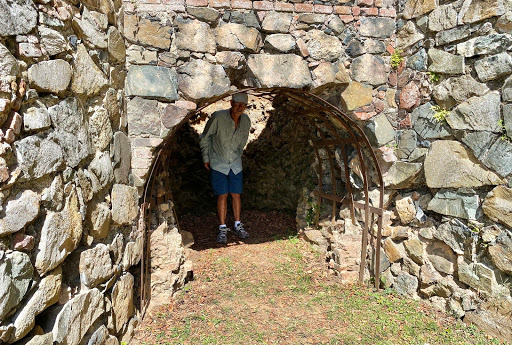 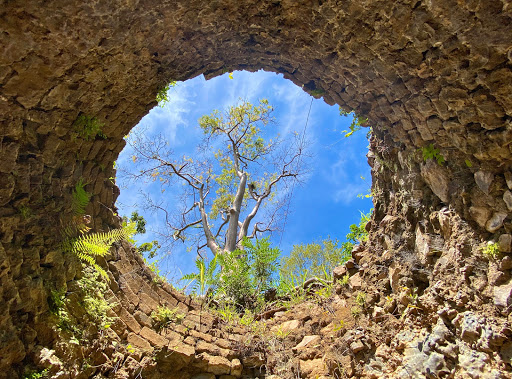 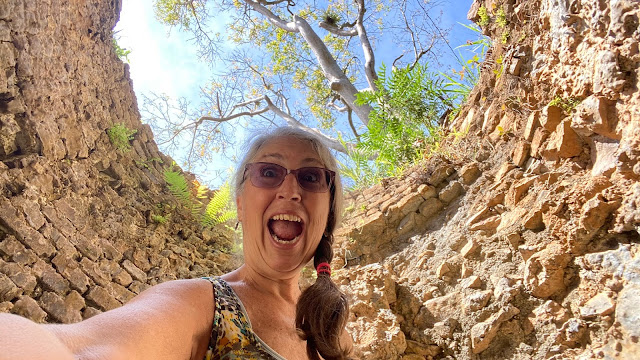 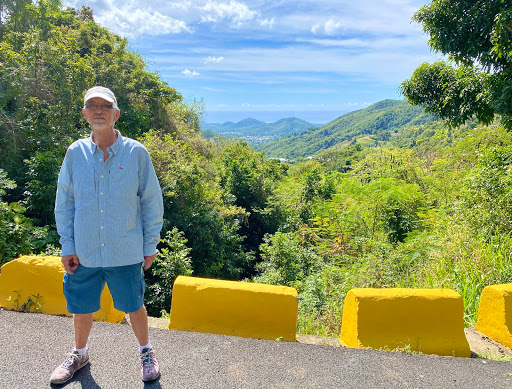 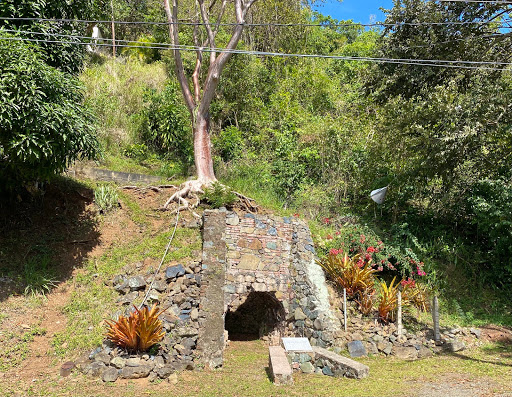 What a great start to our day of adventure!  I love to just take off driving with a rough idea of where we're going, with the flexibility of taking a zag or a stop at some unexpected curiosity.  We did exactly that when we found this crazy wall around a home high up on the hill, with the road cutting around it on three sides.  I remained on the ground, while Bruce and the others climbed the hill and took in the view from above!

I waited around down below, while the others explored up above.  Evidently, the view from up there was spectacular, but a little disconcerting.  My foot is just a little untrustworthy, so I was content to marvel from the car! When they were done, I picked them up at the gate, and off we went!

We made a brief stop at another new spot for us. There is a really nice Ceiba tree in Peñuelas, and we drove through the hilly neighborhoods until we found it.  La Ceiba de Peñuelas is another ancient island treasure!  It is huge and it's in such good condition.  This is most likely due to the fact that it is inaccessible to the general public, being well inside of a fenced area, complete with chickens!  We sure wanted to find a way inside, or maybe talk our way in with the property owners, but we stopped short of knocking on their door.  We had to be content with just gawking from the fence! 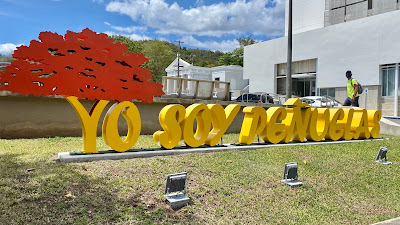 Next stop, the central plaza for the town of Peñuelas!  We've been through this area many times, but have never taken the time to stop and explore.  Peñuelas is known as "El Valle de los Flamboyanes", the stunning red-orange poinciana trees that grow all over the island.  There is so much history to know about our island, and visiting the many municipalities is a good way to make it interesting.
Visiting on a Monday, while we miss a lot of the "local flavor" and activities, we find these places practically deserted, so we've got it all to ourselves.  Free to roam, we wandered over the many points of interest in the plaza. 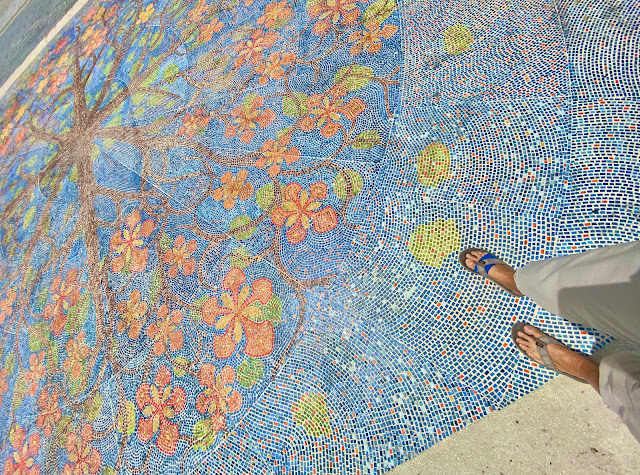 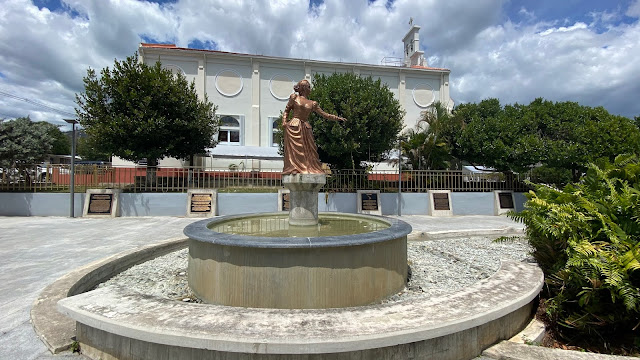 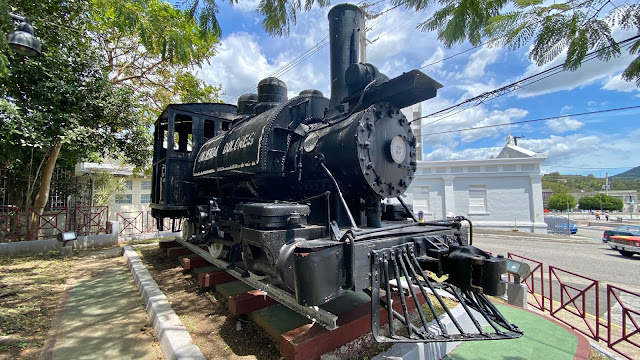 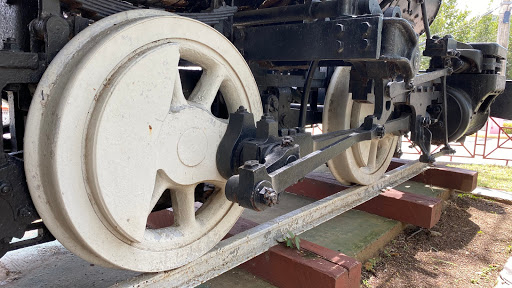 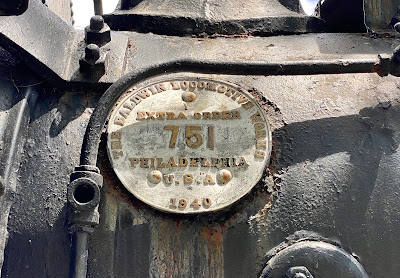 At this point, we were beginning to get hungry.  I had considered bringing a picnic, but since I wasn't sure how the itinerary would play out, I just brought a couple of energy bars and some drinks.  Finding food on a Monday in Puerto Rico is a gamble.  There are so many choices for local food vendors beginning maybe Wednesday or Thursday, but not so many in operation on Mondays and Tuesdays.  So on our way to the next brief stop, we began to look around in earnest.  Luck was on our side today, as we found a Pincho stand the next block over from our destination! 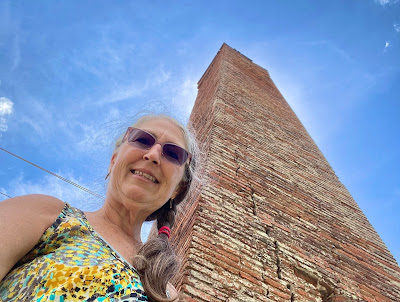 La Chimenea rises starkly from a corner in an average neighborhood here in the heart of Peñuelas' Santo Domingo Sector.  These relics of the bygone sugar industry are scattered throughout the island, and I always enjoy ticking another one off the list.
You can read more about this, and the other sites above by clicking here! 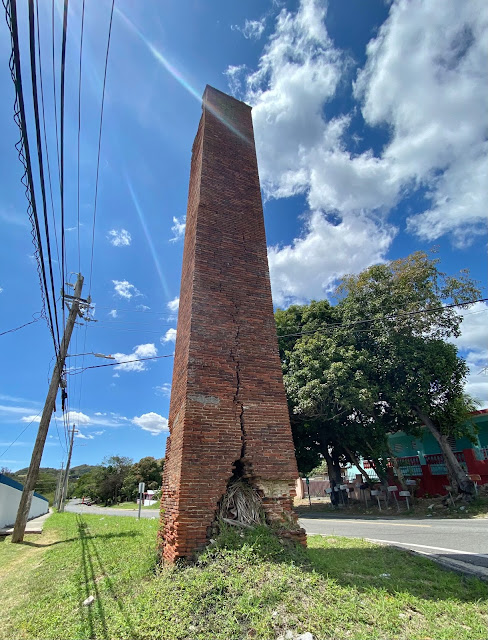 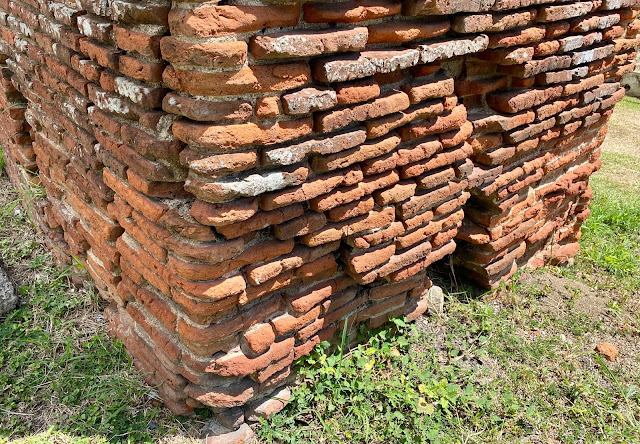 Leaving here, we swung back by that Pincho stand, and picked up some of the BEST pinchos we've ever had!  You just never know what you're going to get... and for $2 each, we got more than we expected! From here, the road went from neighborhoods, to outskirts, to mountainous, to downright semi-treacherous!  My passengers were getting nervous, but I assured them that we had been this route before. 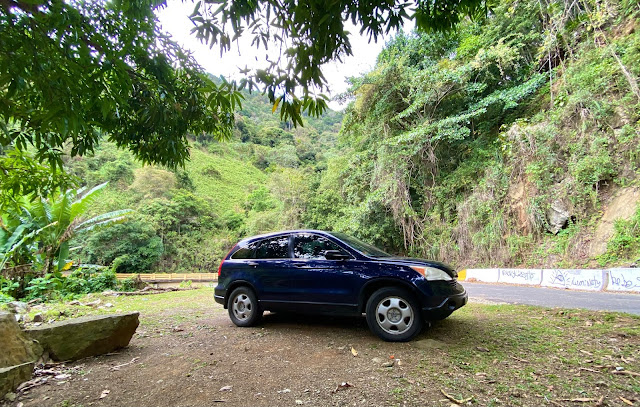 When I parked the car in the clearing, we all got out and just stared upward in wonder at the shear rise of the mountain that now encompassed us. The birdsong was amazing!  The distant sound of the waterfall was alluring... but we've got a picnic to get through before we adventure on!
I've put together a video to show our little adventure to La Soplaera Falls!  I'm learning very quickly, that whenever possible, Jodi finds a way to the top of any and all structures.  We all made our individual way through the multi-level stream, through and amongst the boulders. When I arrived at the falls, I was not surprised to see that she had already continued on up the side of the ravine!  I wouldn't advise this to anyone, and I was more than a little nervous as she finally crept back down.
La Soplaera Falls has been a favorite of ours for many years.  We've been here more than a half dozen times, and each time, the conditions are somewhat different.  Today was about as perfect as it gets!  I'm a little disappointed that we didn't strip down and take a full-body plunge into the cool mountain pool... but we've still got places to go, and just enough time to get there and still get home by dark.
Now we're backtracking from Peñuelas, to the little town of Coamo, where we will tick another new-to-us attraction off of the list.  Puente Las Flores (bridge of flowers) lies at the end of a dirt road.  When our Google directions failed to bring us all the way, a kind gentleman knew exactly why we were in this obscure neighborhood in Puerto Rico... He pointed us the way, and we found only one other car arriving to the parking area.
As it turns out, the parking area filled up by the time we left, and there is another entrance on the other side of the ravine that the bridge spans.  Thankfully, everyone we encountered was properly masked up and in true Puerto Rican style, very courteous and helpful.
The vines that cover most of the wire enclosure must bloom at some time during the year.  Today, we found no flowers, but it was still a fun place to visit, and we will come back to check for flowers another time! But even without the flowers, it's another opportunity for a photo with the Puerto Rican Bandera! 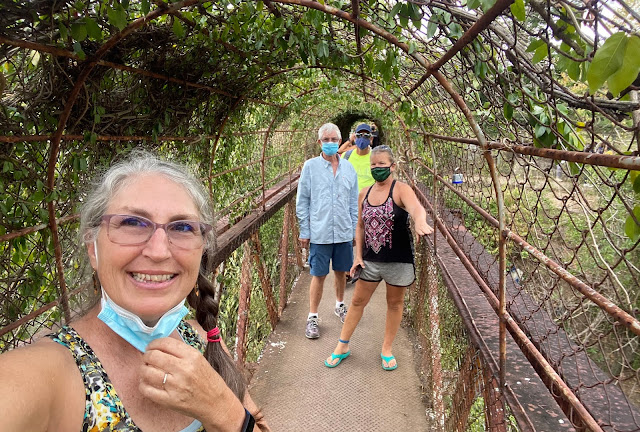 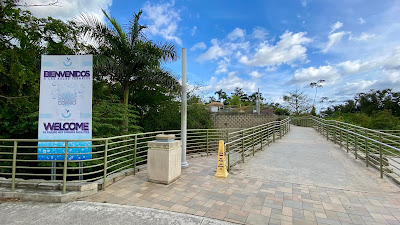 After a full day of driving, wonders, hiking, near-death experiences, and an abundance of camaraderie and laughs, we wound up our adventure with a nice soak in the Aguas Termales de Coamo. I can think of no better way to relax after such a day.  We love coming here in the early evening for a soak before dark.  It's too hot to visit during mid-day, but today, at the end of "winter" it was particularly delightful.  The prices have increased a bit, but I've often wondered how they could manage to work so cheaply.  I'm happy to pay $5 for admission for Bruce and I. 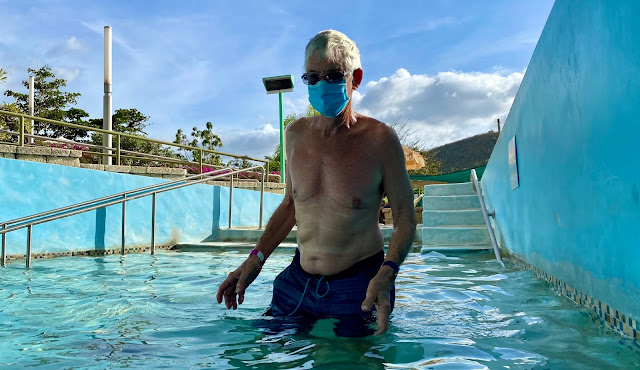 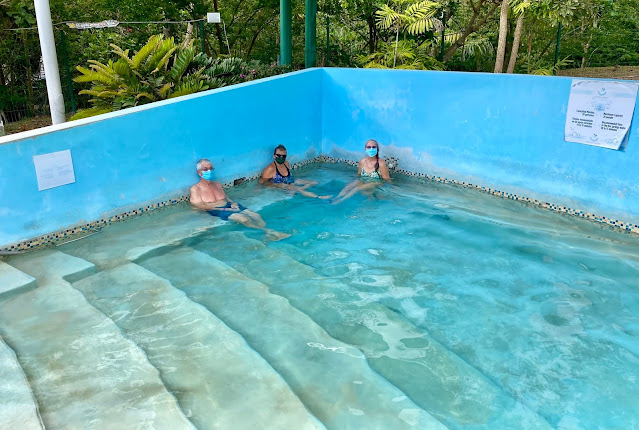 And that's it folks!  That's what a tank of gas and a free day will get you here in Puerto Rico!  We opted out of stopping for a meal, since we were all pretty disheveled-looking.  I dropped our Cruiser friends off at their boat, and spent a little time with Burt before saying goodnight and slinking off to our beds.
Today has been a red-letter day in my book.  While it was my home island, and my car, we still could have easily imagined that we were on one of any number of Caribbean islands, with a rental car and random cruisers we found in our anchorage.  Cruisers are almost always up for an adventure, and today's has be EPIC!  It does my soul good to once again feel a part of the Cruising Community that, for so long, was a huge part of my identity. I think I've got my fix now, and it will suffice me for a while.  So while we are now CLODs (Cruisers who live on dirt), every now and then, we have the opportunity for a Cruiser life revisited!