After a not-so-great night's sleep in a new place, we were nevertheless up early and ready to go out and see some sights!  I had an itinerary for the whole trip, which began with today's search for a pirate cave!

Today, we would venture out into the Guaniquilla nature preserve, managed by our Amigos at Para La Naturaleza!  While I would have preferred, and searched to find in advance with no luck, a guided tour of the reserve, we set out on our own with emailed permission from the property management group, to enter at our own risk.

I searched for many days to find definitive information about the trail, hoping for a map.  But with only some vague instructions, and our Google map image, we parked the car and entered the property.  The stretch from the very small parking area to the Ruins of Hacienda la Romana was very wide and well-travelled.  A nice shade dappled walk took us gradually up, with lots of stunning views of the Mona Channel to our right. 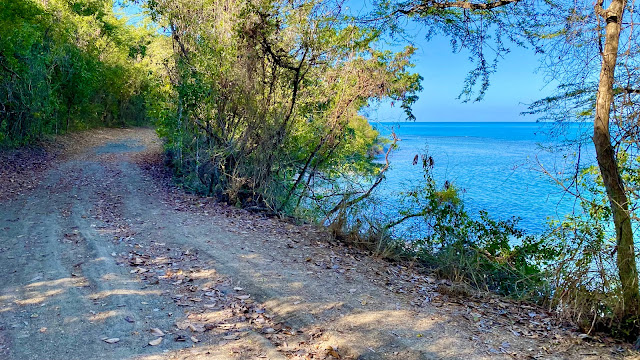 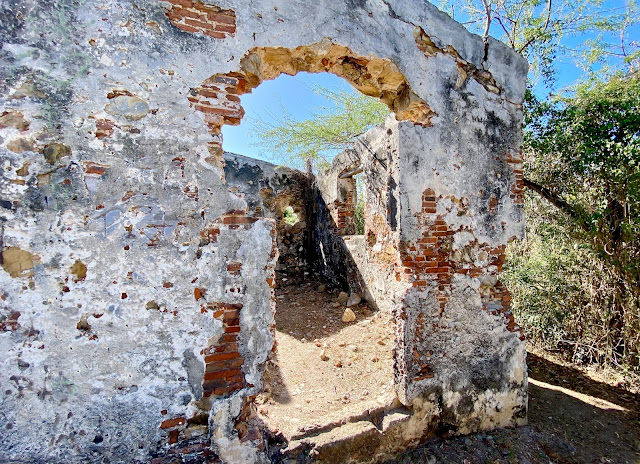 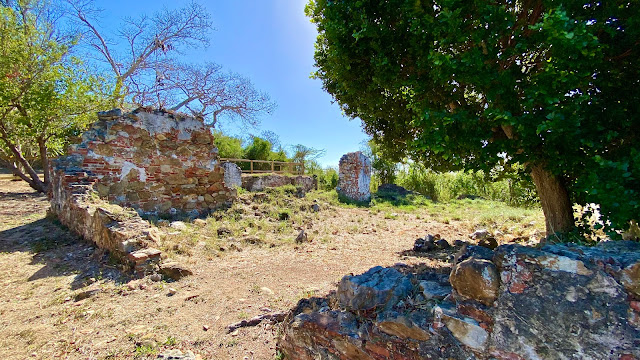 We easily reached the ruins, and I began to think that all of my searching and worry had been for nothing.  So far, the trail was super easy with no choices to be made other than the obvious.  Maybe my theory that the less information you can find about a thing, the less information you will NEED about the thing!  I haven't been able to find much about the ruins here, other than that it was once a place where sugar cane was grown.  The trail leading to the Dog's Teeth, and the elusive Cueva de Pirata Cofresi led off to the left of the ruins.

Let me say here, that not only would it be advisable to go with a guide for the safety factor, the wealth of information imparted by a caring guide is invaluable.  We will do this again when Para La Naturaleza is resumes offering tours (post Covid).  I was able to find this very nice review of one of their tours.  Please read through it to find little tidbits that I will not repeat here.  Also, I/we entered the cave without appropriate safety gear.  This area is prone to strong earthquakes, which continue almost daily.  Rocks could have fallen on my head at the least, and a cave-in could have occurred at worst.  I do not advise you do this without proper gear and a guide.  We were lucky, you may not be!! 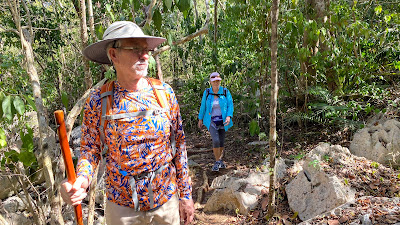 Another thing we soon learned, was that if there was a map, there were two trails shown on the map, but a mysterious third trail at the crossroads.  ALWAYS take that extra route, because it leads to awesomeness! The next marked fork in the trail left us a little confused.  The trail showed two choices, but clearly there was a third.  I left my crew and dashed off down the trail to check it out, only to quickly call them to follow.  This was it!  We had found the Pirate's cave!!
We peered down into the closest opening and immediately decided that we would not be going down there, and that we had brought our flashlights and headlamps for nothing. The way down was very steep and no obvious trail could be discerned.  Bruce balked completely, seating himself on a rock just outside the second entrance for a little rest.  I moved on past him and looked down. 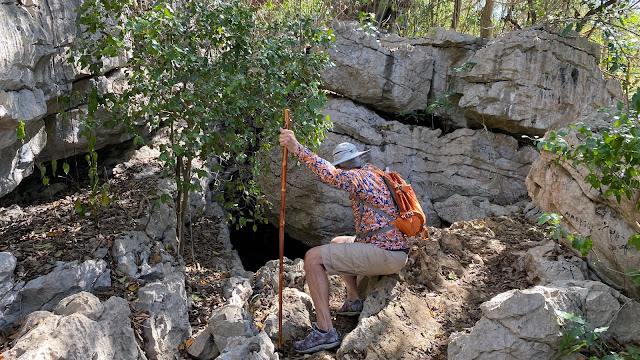 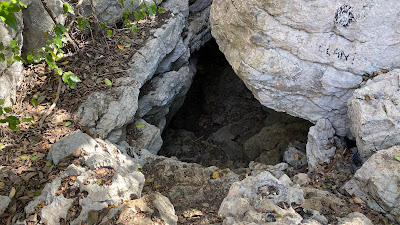 Here you could see the smoothed and dirty hand holds, and some definite footholds.  Stripping off my backpack, I left my crew up top to see if I could creep down into the hole without falling.  It turned out to be much easier than I thought at first.  The footholds were solid and easy to reach.  Suddenly, I was down inside the cave!!
Once down at the bottom, I saw that it opened up, being mostly just a cavity beneath some stacked boulders.  There was a trail leading down into the more underground portion of the cave.  I could see a faint light that must be coming from another entrance.  But as much fun as this was, I wasn't going any further into the earth today!
What a thrill this was!  But I have to admit that I felt like I was on borrowed time down there.  We've had earthquakes and they continue to this day!  I was steadily stifling that voice of reason that normally governs my actions.  Thankfully, I was not punished!

So WOW!  We did it!  We found the cave, and easily I might add.  Now we continue on to see if we can get a better view of the Dog's Teeth karst formations that lie in the center of Guaniquilla Lagoon.  We backtracked to the sign post and took the other trail, which very quickly led us to another choice.  This time the unmarked third trail took us NOT to the edge of the lagoon as we assumed it would... But to a BONUS CAVE!

This time, I wasn't going to be the only one to have the excitement... and the DANGER... of going into the earth!  Passing not one, but two signs warning of seismic activity, we stupidly intrepidly forged ahead.  This cave entrance led us through a long crevice, deep into the rocks more than down into the earth.  At the furthest spot we reached, it began to go down inside the ground, and we decided that we had tested our Karma quite enough for one day.  We marvelled at the amazing place we found, and then we got back out of there with no shaking ground or falling rock.


Reluctantly we climbed back out of the crevice and backtracked to the fork in the trail.  We were elated that we had found the cave, and didn't die for it!  All of this excitement buoyed our footsteps as we moved on along the sun warmed trail. I think that this may be the last of it's kind until next winter.  While it is still cool enough with a breeze, that mid-day direct sun is becoming rather warm for hiking!
Very soon, we found yet another choice to be made, and this time it WAS the lagoon trail.  We clambered out onto the rocky shore of the lagoon and just stared at the marvelous vision before us.  Too bad these rocks were in the center of the lagoon... I would have enjoyed a closer look.  But today, we will settle for watching the ducks swim lazily across the water in the bright sunshine and pure, fresh air!  Ahhh it smells lovely here! 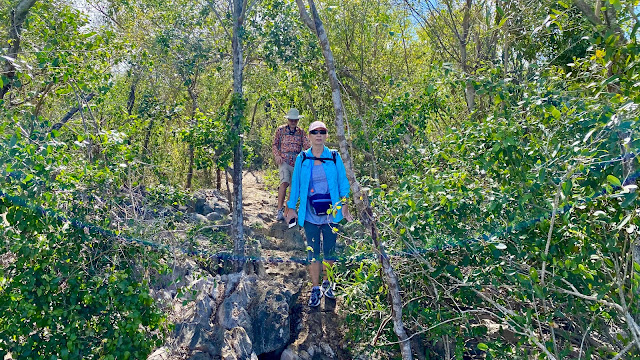 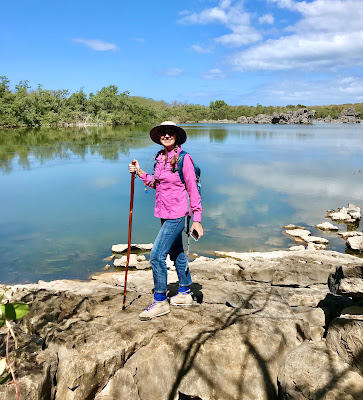 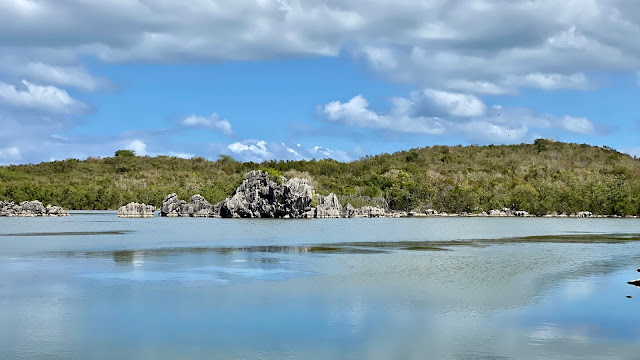 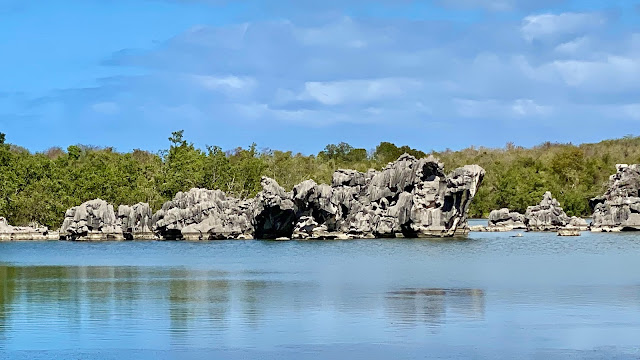 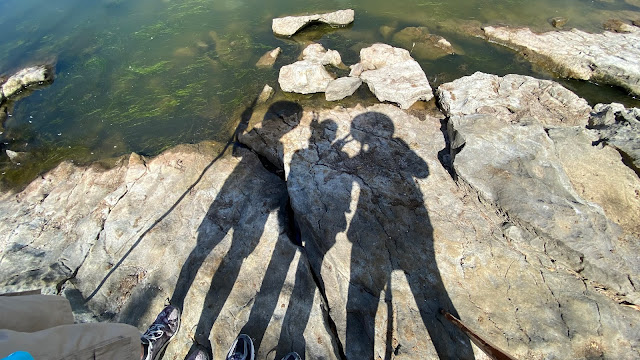 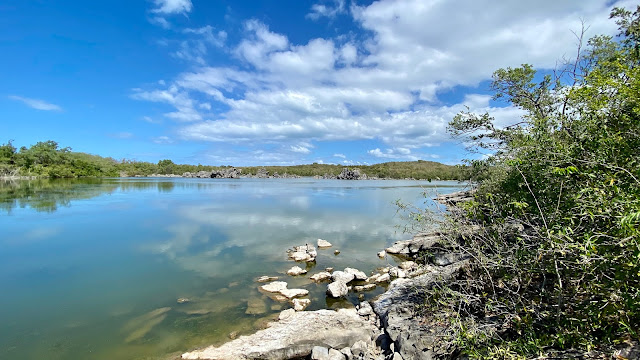 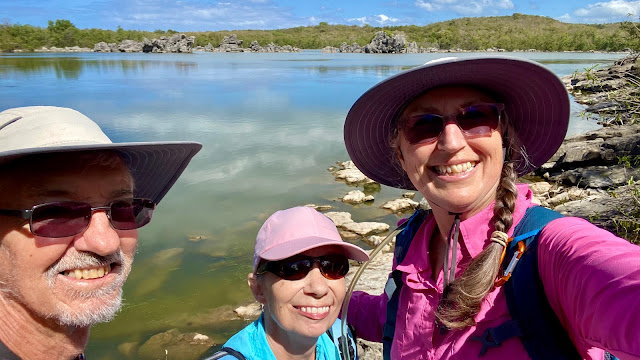 With all of our objectives for the day now having been met, we took a quick vote on how to proceed.  Should we backtrack the way we had come, or should we press on and hike all the way around the lagoon.  I have to admit that I'm surprised at the unanimous vote for taking the long way home!

We trekked along through the changing landscape, leaving the rocky hills behind, and entering the salt flats where we wound our way on sandy ground with mangroves and sea grapes shading our path.

I have searched and can not find the name of this tree.  We found it growing all along the beachy part of the walk today, and it has thin layers of bark sloughing off.  The article linked above mentions it and states that some people used to survive on boiling the bark to make a "chicken soup".  I would love to know more if anyone can find it... please send me a link!

The rest of our walk was relatively uneventful, but we still found plenty of things that interested us.  If only for the small private little stretches of beautiful beach, this route was a score! 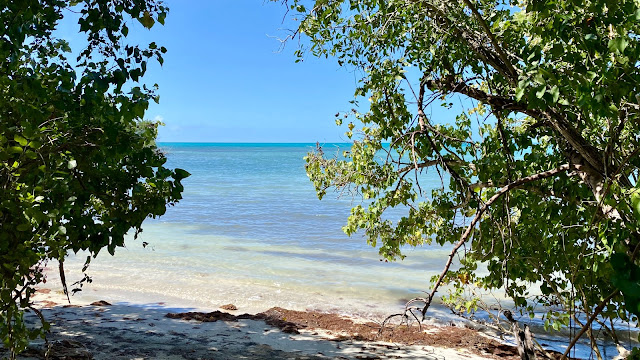 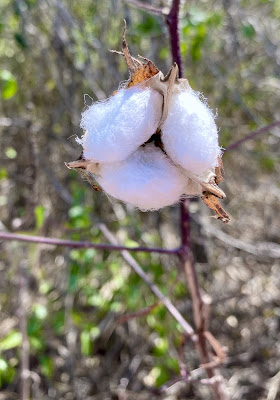 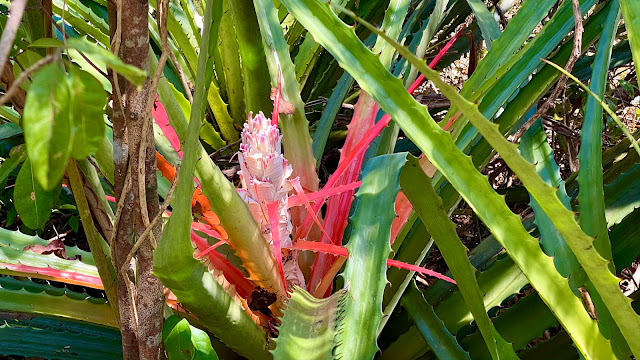 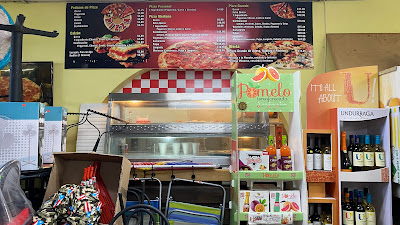 Our hike took us almost four miles full circle, and almost 5 hours!  Of course we were ravenous, and thanks to Bruce... we made haste to get to the little country store for a home made pizza! Elis's Mini Market has a pizza kitchen tucked way back in amongst the everything-else she offers.
We were done for the day.  We took our pizza back to our house and showered, then plunked our butts down in our chairs out on the veranda to eat, drink and while away the evening until mosquito hour chased us inside.
Day two of our staycation was done, and all of our lingering doubts about finding the cave were vanquished!  If our trip ended right now, it would have been a great one!  But wait... we have more days!  Stay tuned!