It’s A Date - Dinner And A Parade 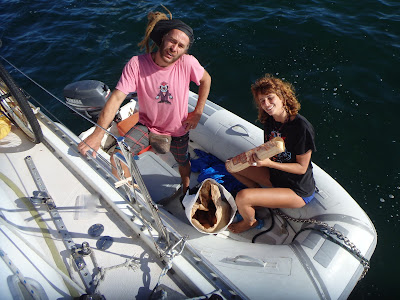 So many times in our Cruising past, we have failed to be in the right place at the right time.  Finally we are poised at the cusp of being “Where it’s at” to participate as much or as little as we please.  Word has it that there’s a parade in Marigot… Something to do with Mardi Gras?

We’ve had enough of boat projects for a day or two… let’s take the day off and head ashore to see if we can find the parade!  Breakfast came to us by way of the Bagette Boat… The Almond croissants are seriously delicious… but good luck trying to convince this cute couple that I can NOT eat them every day!  I think they lapse into understanding only French when it suits them… Well…maybe just one more… 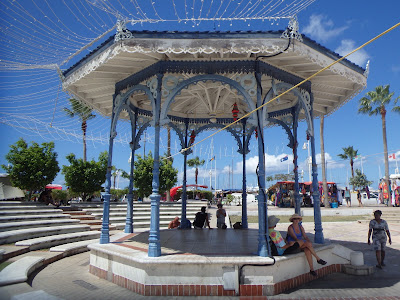 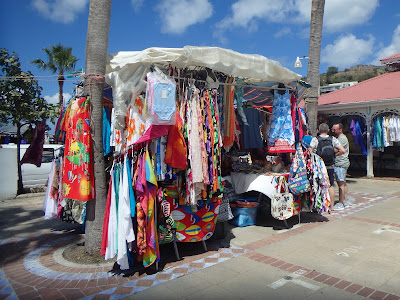 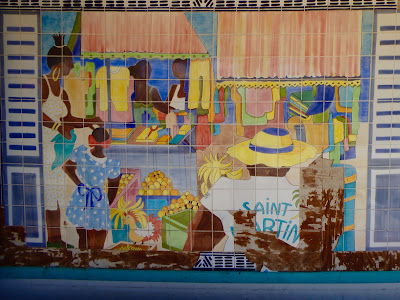 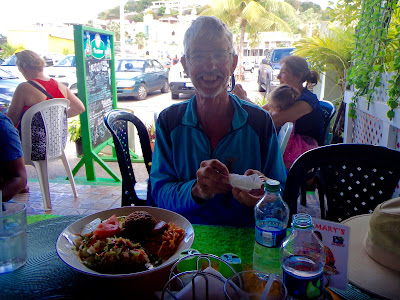 By the time we went to shore, returned to the boat for Bruce’s shoes… and made it back to the dinghy dock… I was beginning to feel hunger pangs again.  We strolled the nearly deserted streets where one after another interesting looking restaurant displayed nothing but shutters…  Soon enough we began to smell food and followed our noses to Rosemary’s. 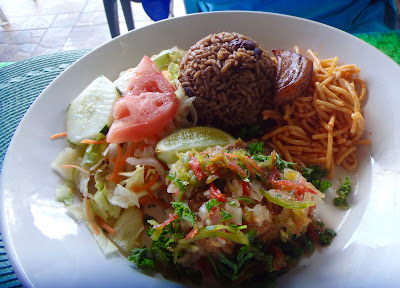 The menu looked good, and the welcoming attitude of the server convinced us to squeeze into this crowded little open air eatery…  We ordered fried Mahi Mahi with Creole sauce… mmmmm… 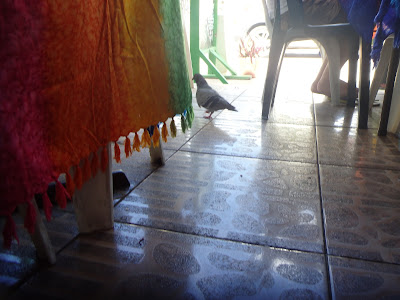 As we sat there listening to the sounds of French conversation, watching pigeons strut around beneath the tables in search of crumbs… and devouring a simple but delicious dinner we couldn’t help but marvel at what odds had brought us to be in this place…  We truly are fortunate. 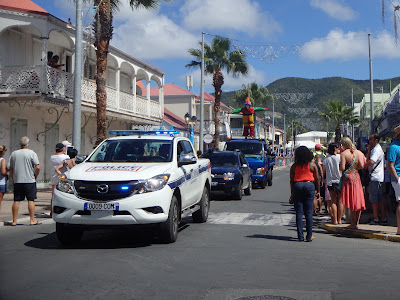 Just as we were finishing up our dinner and paying the very reasonable bill, we began to feel the thump, thump, thump that would fill in to become very loud music.  That must be the parade!  We pointed our feet in that direction and followed our ears until we could literally feel the thumping as it echoed in our chests and rattled our ribs!  My own heart had to compete for control inside my chest.


We found some policemen where the road was blocked off up ahead and asked around.  Perfect spot!  The parade would come right down this road toward us and then turn to our right.  We would have a primo viewing place right here. 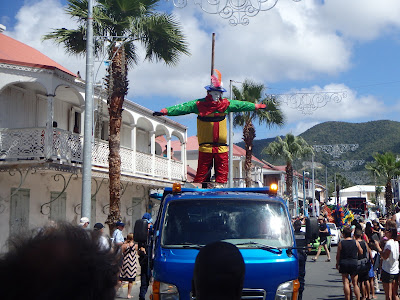 We wondered why there was no sign of the parade after a bit… and asked our policeman about it.  He said that the lead car had a flat tire so the whole parade had to cool its heels until a repair could be made!  Eventually the music got louder and we could finally see the beginnings of the parade participants coming our way.

First came some sort of evil creature… I’m sure it was symbolic of something.  Must brush up on my Mardi Gras lore… 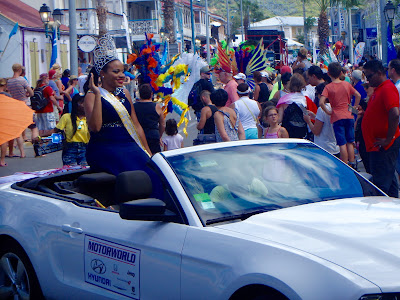 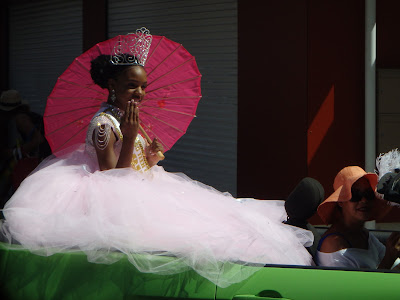 Then the Princess and Queen, followed by one after another group of mostly ladies, but a few men… all dressed in bling and feathers! 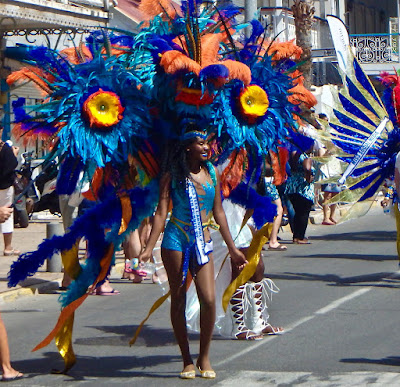 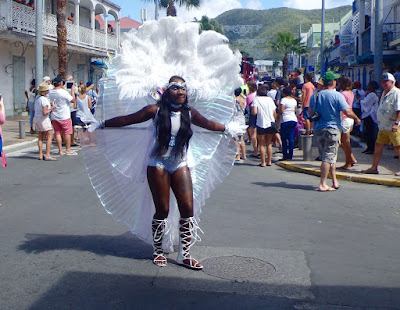 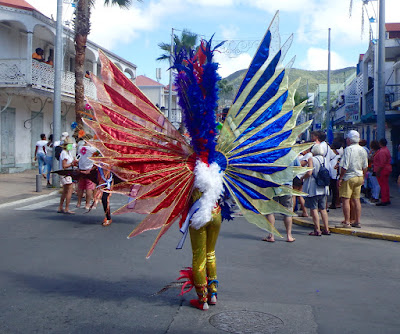 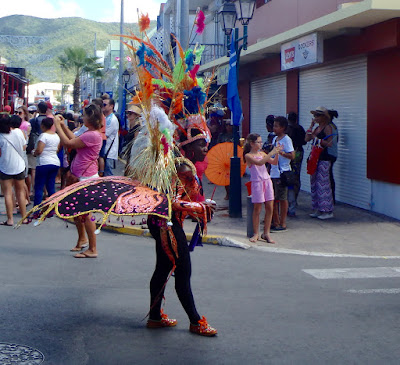 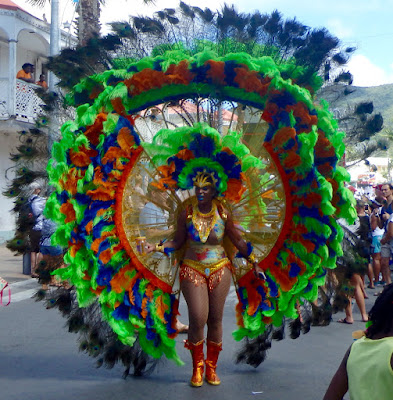 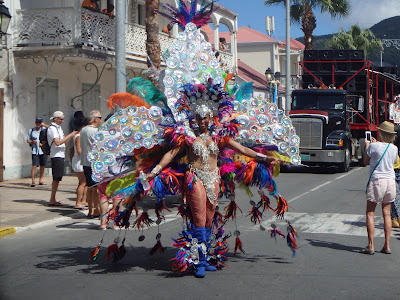 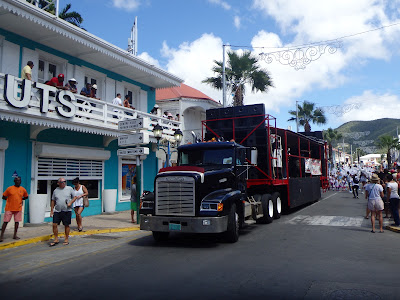 The costumes ranged from fully elaborate, to rather simple.  The makeup and the sparkles and the movement to the music made me want to dance!

A few times people would encroach on our view, but for the most part we had front row seats just behind the policemen.  Several times the crowd had to be pushed back to allow space for the semi-trucks pulling the bands with all of their equipment and VERY LOUD speakers to pass.  Two of them had to make multiple attempts to make the sharp turn without taking out a lamp post or the eaves of the building behind us.  It was all very exciting to watch and I felt for those poor drivers.  I was also very glad that I didn’t have that job!  Driving a boat in wide open waters is very much more my speed! 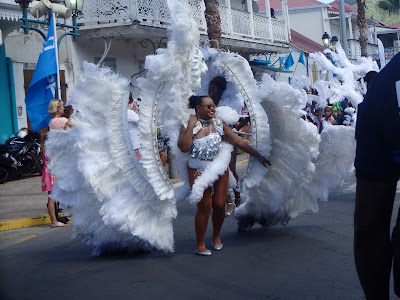 There were many long pauses in the movement of the paraders… I think it was due to performances for the judges just down our road.  By the time the later groups made it to us, the kids were visibly running out of energy.  The day is warm and the sun is shining directly on them for the most part.  One poor girl looked as if she was going to drop. 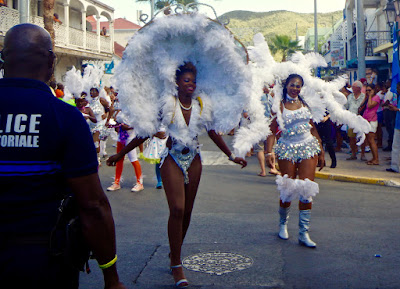 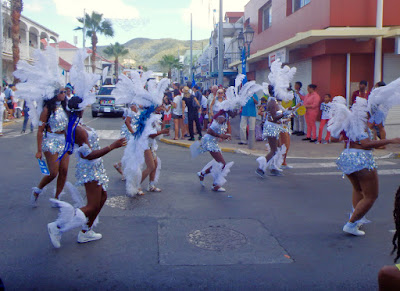 There were handlers keeping up with their groups, providing water and food.  They were also throwing out water, t-shirts, and even handing out BEER!  Wonder what it takes to get a permit to hand out beers to random strangers of indeterminate age in the streets!!!  Oh yeah… we aren’t in the US anymore!  NO PERMIT NEEDED!  We didn’t get a beer, but we did get a cold water!  Score! 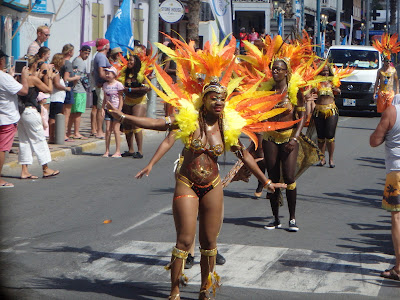 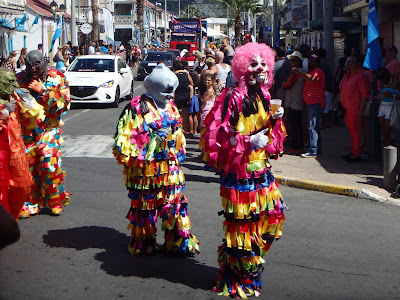 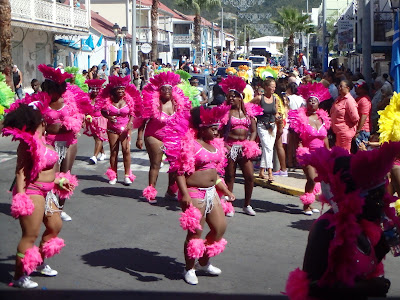 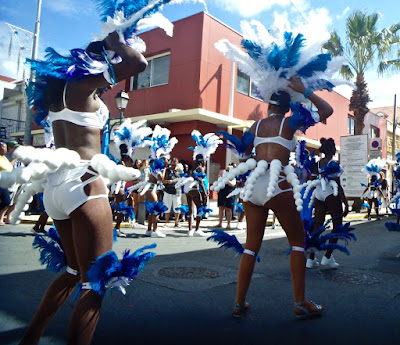 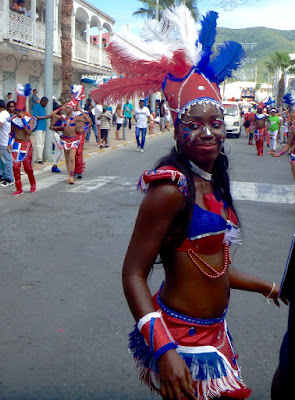 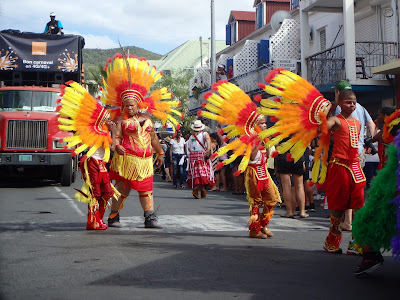 Eventually Bruce started to fidget.  I ignored it for a while, so he had to step it up and actually say that he was ready to head back to the boat.  It was 3pm and very warm.

Walking back through the empty streets, we caught a small group of paraders waiting outside the public restroom… Wonder how they got those costumes off… and back on again so that they could rejoin the parade just down the alley… 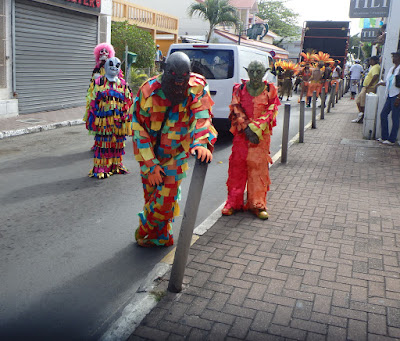 As we backtracked to the dinghy dock it was like seeing the parade again only backwards… and with less energy!  These scary dudes looked positively frightful with a little body language shift…

What a great day it was.  On our way back we passed our friends on Adventure Us 2, who had attended the parade with Smart Move.  We missed them because of our unscheduled return to the boat, but in the end, it was fun doing our own thing, just the two of us.  Trying to keep up with four other people in this crowd wouldn’t have been easy.  As it was, we could hold hands and wind our way through… just like being on a date!