Our batteries are toast.  Bruce spends a large portion of his day coaxing the last bits of life out of them.  That’s no way to enjoy life…

So, even though we still had 9 days left before we had to either leave the BVI or extend our stay… we took the weather window that looked to be a “sure thing”.

We felt badly about hurrying our friends on Adventure US 2… we encouraged them to remain behind as it looked like there might be another window coming up soon… but after two days of scrambling to get ready, we welcomed them to our spot near Prickley Pear Island in Virgin Gorda’s North Sound and cleared out with only minutes to spare to make our planned departure time of 3pm on  Valentine’s Day.

For two days Bruce and I had been slowly making preparations… I made Passage Brownies, he cleaned the bottom of the boat.  He checked everything in the engine room and I put things away that might fly around should we be tossed by a wave…  Business as usual for passage preparation… except one thing was missing.  Anxiety.

We were both relaxed and not really even thinking about the passage.  We had to work to remember what we even needed to do to get ready!  We’ve been in our comfort zone for so long, we’ve forgotten how to “cruise”.  Wipe away those mental cobwebs and try to muster up a bit of healthy fear… nope.  Not happening. 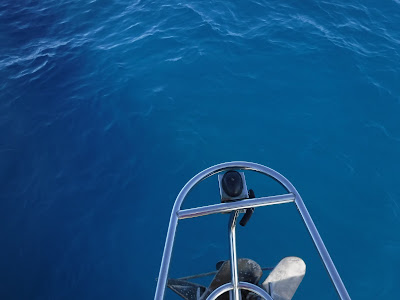 Excitement maybe… yes, it was growing…  We will leave the familiar islands we’ve enjoyed for these many months… has it really been almost a year since we arrived in the PR/VI area?

Anyway… so, 3pm comes and by ten after we were motoring out the North Sound channel and making our hard right to head southeast toward new territory.  The passage would take 12-15 hours so we had to travel at night to assure a daylight arrival. 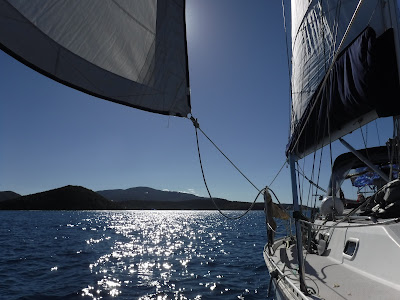 We left early so that we could try to sail, expecting to go slowly… Weather predictions gave us hope of enough north component in the wind to make sailing SE possible… if we could just have ENOUGH wind.

The problem is that with “enough” wind to push the boat along with enough speed, the corresponding sea state would be more rough, thus detracting from the advantage of more wind…  Choices.  We chose based upon a benign sea state forecast, even if we had to motor the whole way!


I was dead set on sailing.  We had all night.  Let’s just shut off the engine and see what happens… Slowly we turned down to our course after raising the full mainsail… we were doing barely 3 knots.  We rolled out the full jib and it got us up to 4 knots…


Adventure US 2 did the same, but they kept their engine going and so they quickly pulled past us…  Slowly we rode the wavy bumps as we passed Necker Island… The wind shadow of the island further decreased our speed to less than 2 knots.  I could see the veins in Bruce’s neck beginning to bulge but he did his best to channel that energy into coaxing as much speed as possible with the given conditions…  If we could just get out of this wind shadow!


Eventually we did, but it didn’t do much good.  Looking forward we could see three boats, including AU2.  Periodically they would hail us to see if we were having any trouble… I think that’s code for “Get your asses moving”!!!  But this is how we cruise!  They wanted to remain within VHF hailing distance but it really wasn’t necessary… Conditions were unthreatening and there were quite a few other boats out here… 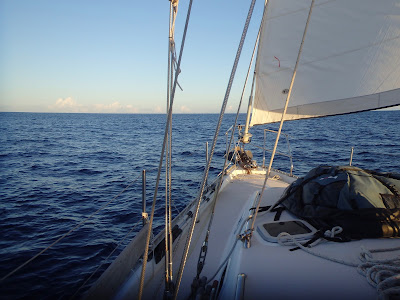 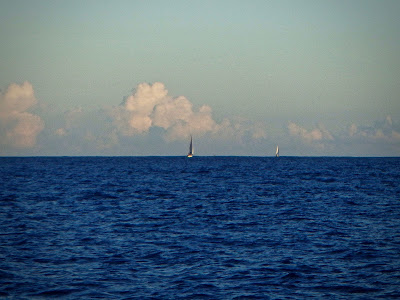 I looked back to see how far we had come as the sun began to make its downward path… I admit that I was surprised at how little distance we had covered… and so, before it got dark, I gave up and started the engine.  So we motor-sail the whole way… At least we got to use the sails… 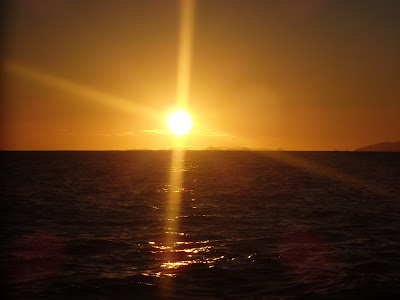 There was still land in our sunset but the rest of our 360° view was flat water and sky.  The blue color drained slowly from the sky, replaced by pinks and purples before all fell dark.  Goodbye BVI, It’s been fun! 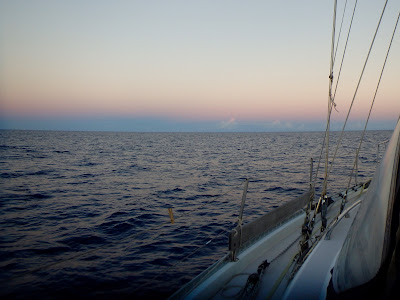 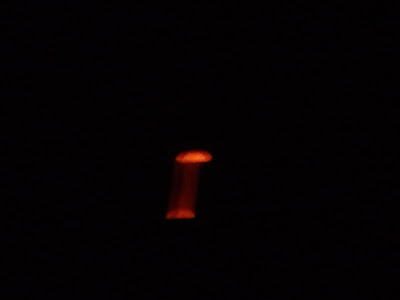 Jezabelle and I left Bruce at the helm and went below for a nap.  As always, it took me a while to deal with all of the sounds before falling asleep.  Each sound had to be analysed, identified, and memorised so that I could wake if there was any change…  It seemed like I dozed for a time when I was suddenly awake again.  On my own I awoke refreshed to take my watch.

Things hadn’t changed much outside of it being much darker with a sky-full of stars.  Bruce took his turn in the bed… Jezabelle, who had followed me up to have a snack, joined him back in the bed.  I settled after assessing our situation and making a minor course change…

I marveled at how far I’ve come, from dreading night passages to truly enjoying them.  The wind on my face alternated between cool and warmer, moist puffs.  The movement of the boat was my friend.  It feels like flying.  I could see AU2 up ahead.  We spoke briefly on VHF, just checking in.

I could see a glow up ahead on the horizon.  I knew it had to be the moon… not full… waning but full only a couple of days ago.  I watched in fascination as a huge orange ball rose silently from the dark horizon.  It was stunning.  I can’t describe the feeling.  How profoundly fortunate are we few to be out here on the dark Caribbean Sea witnessing this private show.

With the moon came light on the water.  The whole night glowed with a blueish sheen as I watched all around.  I had my Kindle but was enjoying just watching…  every now and then, checking the AIS and the instruments, then going back to gazing around me.

The Disney Fantasy announced to all concerned vessels that they would be conducting a fireworks display… Michael called me on VHF to make sure I had heard it… The ship was behind us and off to starboard.  Oh there it is!  I watched the tiny fireworks… what a treat!  Other sailors called the ship on VHF to thank them for the show… Did I mention that we are a LUCKY bunch???

Bruce came back up and I went down for a second sleep…this time falling asleep almost instantly.  I was sleeping hard when Bruce touched my foot, causing me to start awake…. He said “everything is alright, get awake and come up soon”.  I did.  We rolled in the jib. 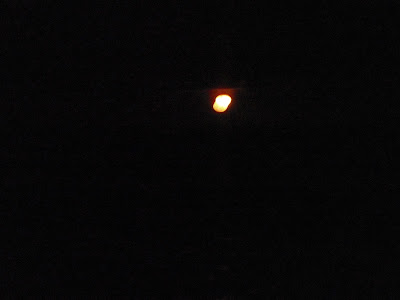 Alone again, the moon had made her way to her high point in the sky. The winds continued to slowly come around from NE to a more easterly direction requiring a tightening of the mainsail.  Twice before dawn the wind moved forward, the mainsail flapped and I tightened it up again.

Bruce came back on deck just after the last tightening.  Dawn would come soon.  It was too late for sleeping, I would be needed to bring us into the anchorage in an hour or so… Besides… I was too excited to sleep.  Jezabelle was up demanding to be fed her breakfast and I was ready for coffee… Thus our normal morning routine, our normal life routine resumed. 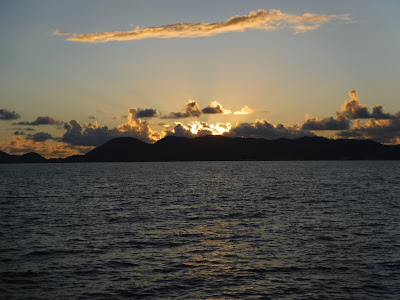 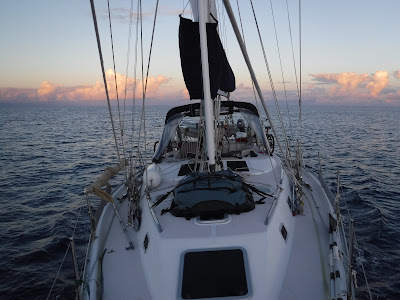 Dawn was coming.  My eyes eagerly scanned the horizon trying to discern what was light from the island up ahead and what could be the first sign of the sun…  Finally she made herself known and committed to her path.  Sunrise over St. Martin.  A small thing, but as I thought about it… not really.  We have achieved another milestone.  We’ve crossed the Anegada Passage unscathed.  We have reached the beginning of the “easy” sailing… no longer East-West but a more leisurely North-South… We’ve reached islands we have never seen. 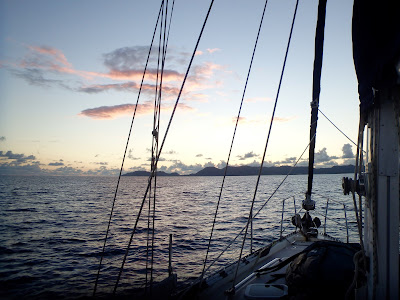 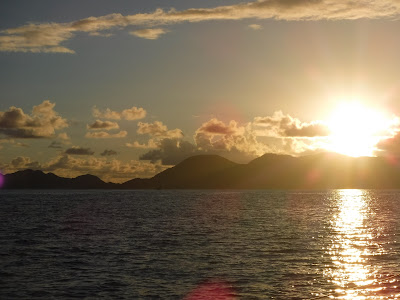 As the sun rose, Adventure US 2 came into clear view.  We dropped the mainsail, now doing us no good… The waves were practically gone this close to the island.  We no longer needed the mainsail to steady the boat.  We rounded the point of land that protects Marigot Bay from the west and thrilled to the beauty around us! 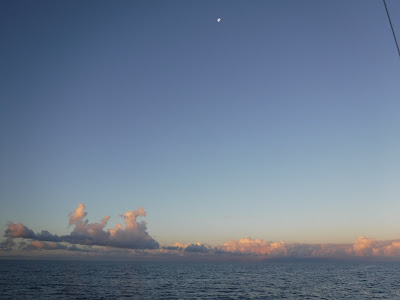 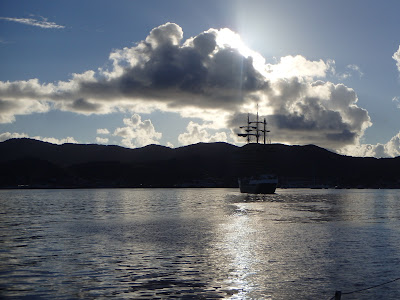 After a quick consult with AU2 over VHF, we dropped anchor in Marigot Bay just outside the canal to the lagoon.  Unlike Bruce and I who had taken individual watches, Michael had sailed the entire night and needed rest.  We would just stay out here and re-evaluate our options later after a rest… 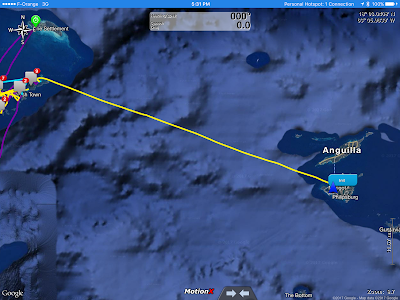 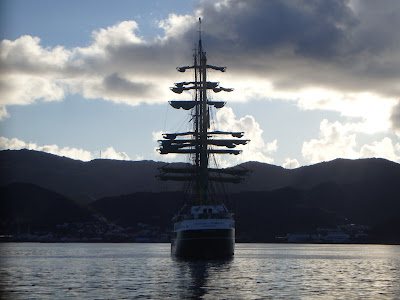 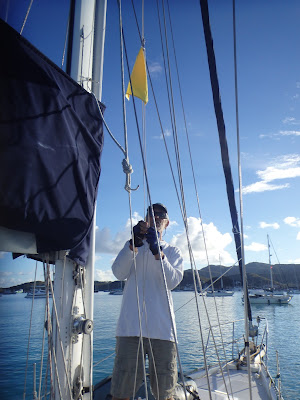 We raised our yellow quarantine flag and had breakfast and a nap… Somewhere around noon, I learned that we had missed the opportunity to clear into the country until after 2pm.  You see, here in France they close most businesses down for a long lunch…


I must say that at this point our spirits were sagging somewhat.  There is always a little bit of that upon arrival to a new place.  After the initial jubilation there's a period of "now what?" that always comes.

We don't know where anything is, we don't know what to do next...  and these feelings are many times aggravated by being tired after the adrenaline rush or the night passage fatigue...

Nothing to do for it but just press on... so... armed with only what I've been able to learn from online sources and from others who have recently cleared into St. Martin... we were off to find that place with the computer to clear in! 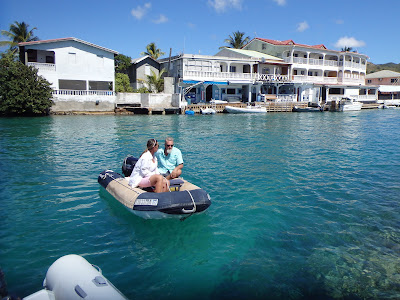 The French are very relaxed about clearance proceedings.  There are several places you can do the quick formalities which consist of completing a form of drop-down boxes on a computer, printing out the form and presenting it to the guy behind the counter for an official stamp.  No cost, just a requested small donation to a charity…

After clearing in we took a spin around the town but soon returned to our boats to raise our French courtesy flag and relax…  Ahhh we made it!  It may not be THE FRANCE… but it is A France! 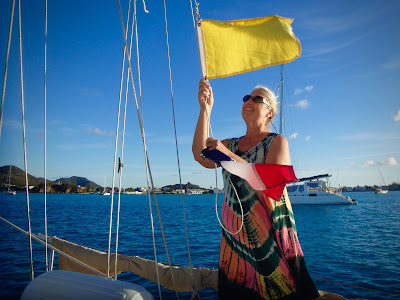 Now that we're cleared in officially and kind of have an idea of where things are, we were beginning to feel better about life.  We returned to our boats and relaxed for the evening.  Feelings of contentment surged back to the surface as our eyes gathered in the surrounding hills and the beautiful waters all around us. 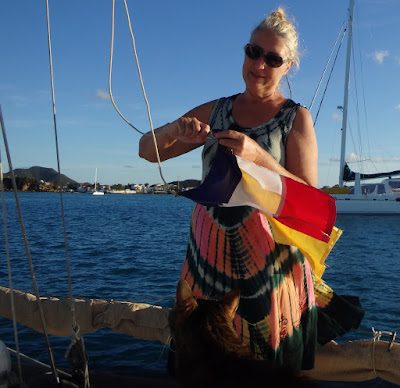 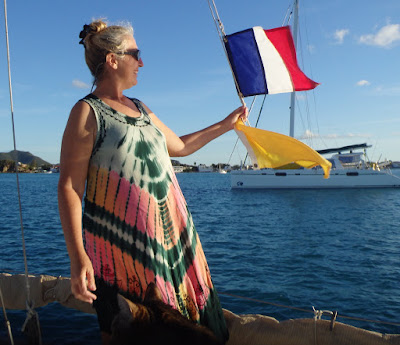 Whatever misgivings we had are slipping away... We are back to that feeling of accomplishment and excitement about exploring our new Country. 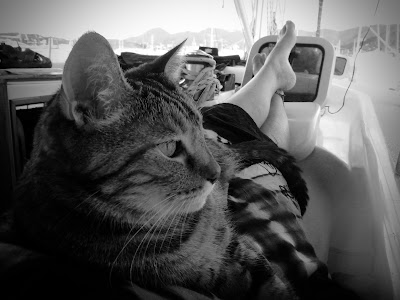 St. Martin is the 5th foreign country we've visited on our boat.  As we look back over the mental miles we've covered, it all seems so small now.  So attainable.

We've got a lot of boat projects planned for our time here in St. Martin, but for tonight... we will just relax and soak it all in.... Cruising life is GOOD! 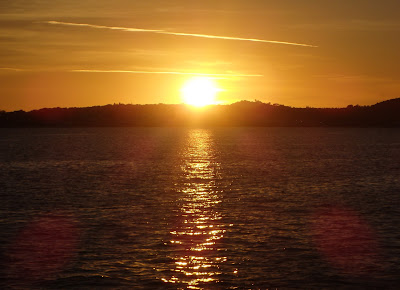