The “Firsts” just keep coming as for whatever reason we motored out of Pond/Savannah Bay the next morning and just kept on motoring on over to Trellis Bay.  Our intended stop was nearby Long Bay, where we thought to spend the night before moving over to Trellis early enough to get a ball. 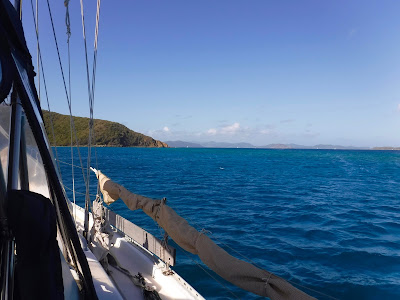 Adventure Us 2 has a guest due to arrive on Friday morning and we wanted to settle on Thursday giving us time to pick up some provisions and do the laundry!  But just for grins, we took a spin around the mooring field in Trellis and found just enough room for us both to squeeze in between Bellamy Cay and the Ferry Landing on Beef Island.


After anchoring just a bit too far out into the channel for comfort… both boats ended up moving a little closer to Bellamy Cay before we felt secure enough to stay.

There may be some anchoring space around the perimeter further from the dock, but I’m a “front row” kind of girl and with a laundry run in my future, I wanted to be closer… The wind was just enough north of east to bring quite a chop into the basin but we were better protected from the bouncy waves here with Bellamy Cay to knock them down. 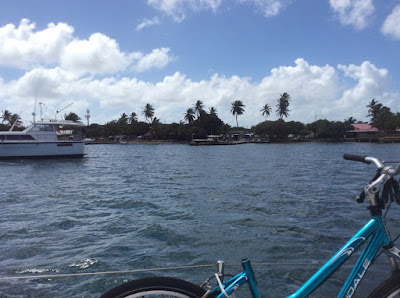 Unfortunately what was given by the breakwater, was taken away by our proximity to the traffic lane… Throughout the day we were continuously pooped by wakes as boats big and small made a steady stream to and from the dock…  Oh well… Can’t win ‘em all, and it did die off at night, so there’s that. 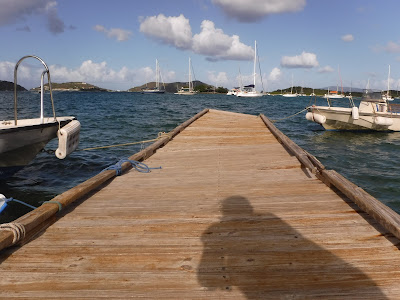 We went ashore and revisited the community here, finding it much improved over our last visit during low season.  Things were spruced up and more neat in preparation for the upcoming Full Moon Party.  We may come back here for that if the weather and timing allows… 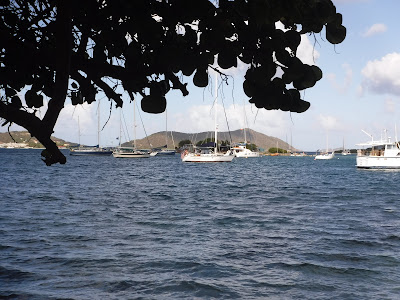 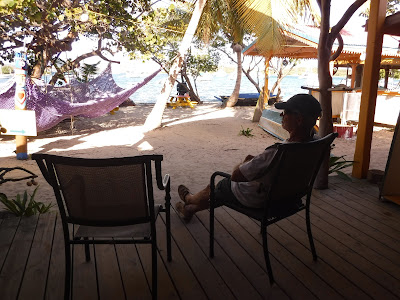 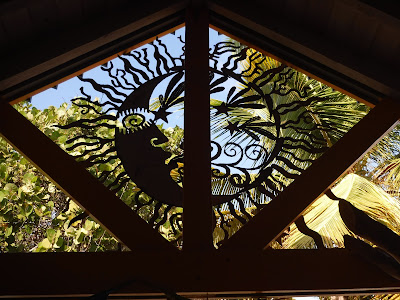 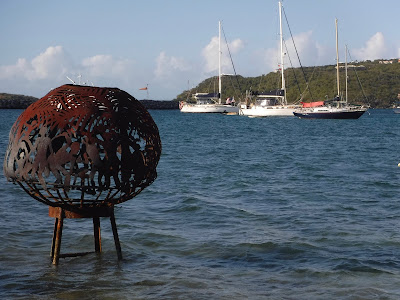 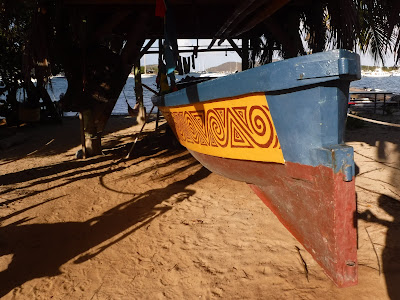 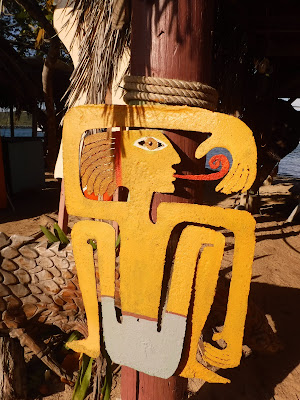 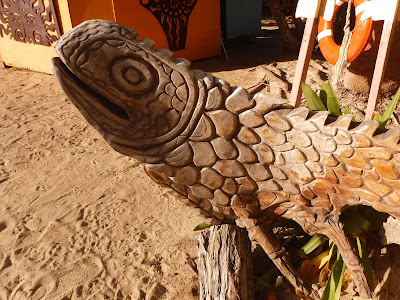 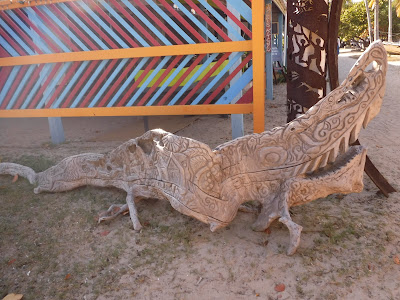 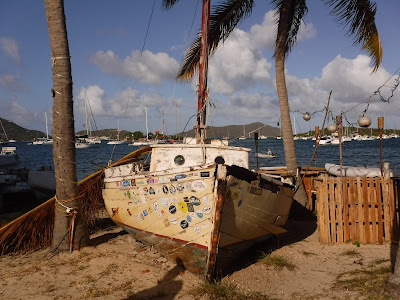 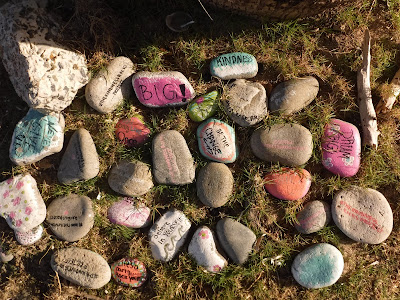 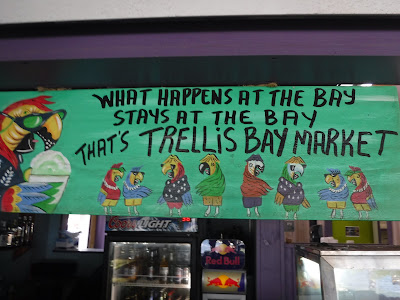 Having a free place to stay loosens our purse strings for other types of spending, so we picked up some happy hour drinks and enjoyed the new patio just off Trellis Market.  We wondered why there weren’t more people here, must be an off day for the charter crowd! 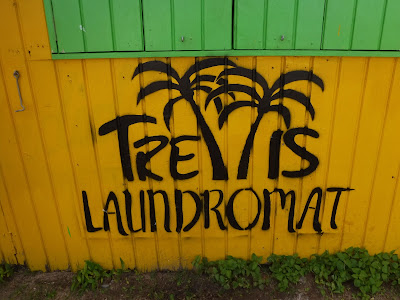 The next morning we loaded up our loads of laundry and made it just in time to the laundromat before others had the same idea.  It was a busy place there for a while!  The washers cost $2.50 per load and DID have hot water!  The machines are all very new and are in prime working order. 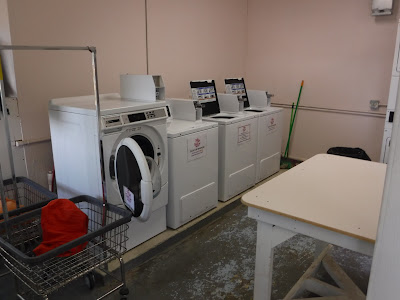 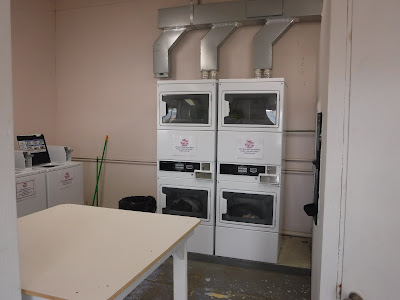 The dryers give you 10 minutes for fifty cents and my clothes were dry in the 40 minutes I gave them.  It’s the little things that mean so much to a Cruiser… 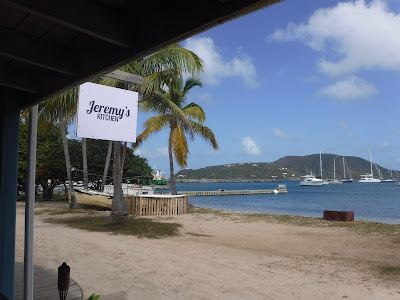 With those aforementioned loosened purse strings, Bruce and I shared a marvelous sandwich for brunch at the newly reopened Jeremy’s Kitchen.  I say marvelous, but that doesn’t begin to properly describe this sandwich.  I don’t often eat out when there isn’t anything on the menu that I can make myself…


But this sandwich I could not have done!  Just the 7 grain fresh-baked bread alone would have proven impossible enough… but the chicken breast chunks marinated in some sort of awesome-sauce I know was far beyond my abilities… and… AND it was served with a warm and friendly smile…  And free wi-fi!


With our basic needs taken care of and the remainder of the day stretching before us… what to do?  We could either be lazy asses and lay around on the boat reading… or we could inflate our kayak and take a look around the anchorage!  We chose wisely and went out to explore! 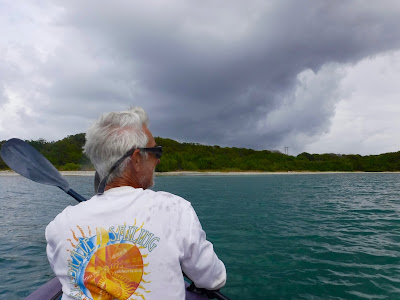 As always happens when we get out the kayak, it began to rain!  But with the rain just barely stopped, we paddled away from the boat and headed off toward the reef extending from Bellamy Cay.


We saw what looked like a charter boat in an odd place… surely they aren’t pinned against that reef!!!  It turned out that indeed they were.  We paddled by as the police boat and others helped them get off and onto a mooring ball… It didn’t look as if they were any worse for it as they continued on with their enjoyment of the basin! 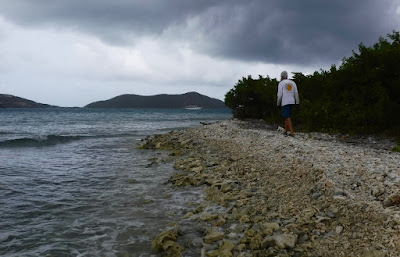 We paddled of to the far end of the basin and beached the kayak.  I wanted to see if I could get a better look at a tall masted ship that was anchored just off of Marina Cay.  We found it and enjoyed the wild adventure of being somewhere else entirely while remaining right in the middle of “civilization”. 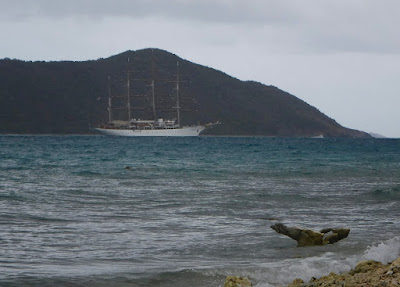 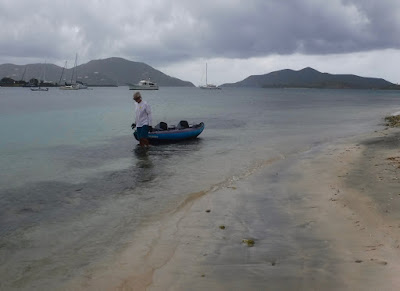 Time ceased its hold on us as we poked our way along the shore. The wind whipped up and rain began to fall again.  I giggled as the cold pinpricks thumped my hat brim and soaked through my shirt to the skin…  We love moments such as these… Our lives are so good… 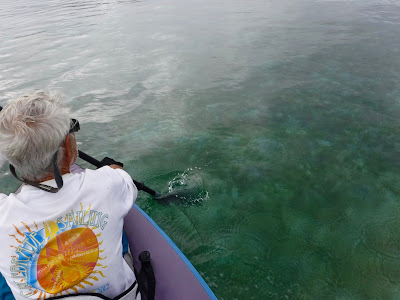 Suddenly as we rounded the curve of beach heading toward the rocks I wanted to explore… the wind completely died.  The water was a mirror and we were attacked by hordes of no-see-ems!  We ran for the deeper water and jumped onto the kayak… paddling madly in on the invisible surface of the water as we continued to swat and fan at the pests that besieged us mercilessly!

Finally we found a slight breeze and thankfully  the no-see-ems disappeared. 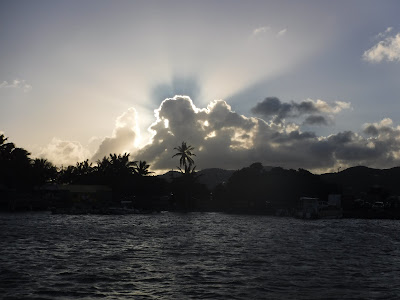 Back at the boat, we put away the kayak and settled in for the night.  Our friends on Adventure US 2 were doing the final preparations for the arrival of their guest the next morning…  This was a new Trellis Bay experience for us.  We’ve only taken mooring balls here before and never have we paddled around on our kayak.  It’s nice when you find that an old familiar place still has something different to offer.