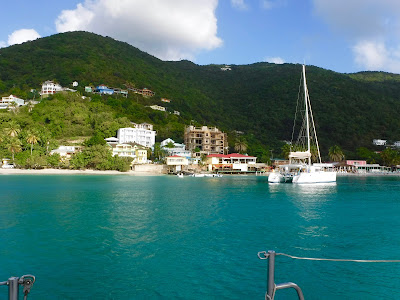 The winds are forecast to be in the upper 20s gusting to lower 30s and waves in the 5-7 ft. range.  All we want is to be comfortable and to get back to Trellis Bay for the Full Moon Party.

So, with those goals in mind, we rejoined AU2 in Cane Garden Bay.  Upon arrival we hailed them on the VHF and they told us that there had been some unpleasantness in the night due to a slightly north-of-east swell.  Allegria added their voice to the conversation as they were one of the boats that had been anchored at the southern end of the basin where we normally do… They had been so uncomfortable they moved over to the north end and took a ball. 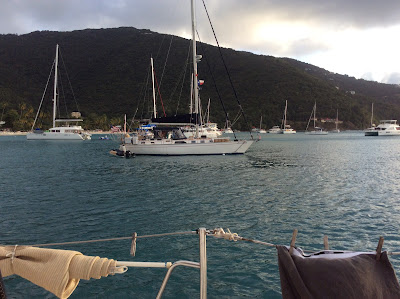 So… with a forecast for more of the same, we motored around at the northern corner of the basin looking for a spot.  We’ve never anchored over on this side before, but after dropping in one spot and being unsatisfied… we chose a hole closer to the dinghy dock and Adventure US 2 moved over to the mooring ball just behind us. 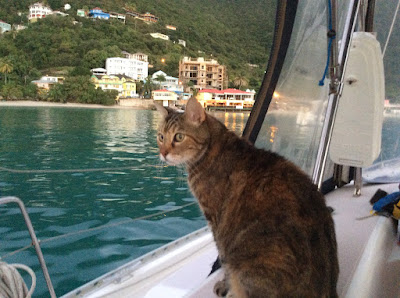 Perfect!  Now we can chat without using the VHF! 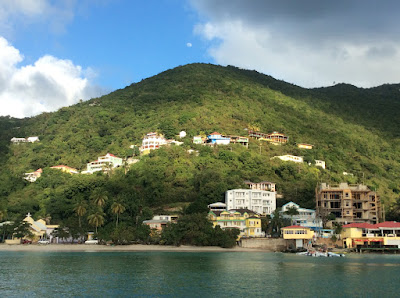 We went ashore and toured the Callwood Distillery (again) and then walked the beach.  There were several cruise ships in Tortola and the beach was flooded with tourists.  It was actually kind of fun to blend in and the level of service the cruise ship passengers are extended by the Locals seems superior to that extended to Cruisers…  We enjoyed the service and picked up a rum punch to continue our beach walk.  We ended up at Tony’s bar and grill for lunch and our happy hour pretty much peaked prematurely…  (I didn't bring a camera ashore, sorry, no photos of this part) 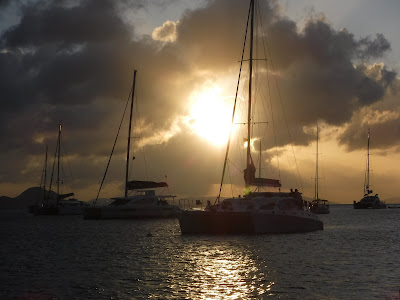 A grocery run was all we could muster on our way back to collapse on the boat for the evening.  So much for the big partiers…  Yea, Some Cruisers (we) are duds…


While relaxing in the cockpit with Bruce rubbing my head to massage away the headache brought on by cheap rum consumed earlier...the winds grew light enough for the boats to drift around in every direction on the swirling current.  Suddenly we hear voices… CLOSE!

We jumped up like we had been caught inflagrante dilecto… and were horrified to see the stern of Adventure US 2 just off our starboard stern quarter.  No… I mean, they could touch us!  As their dinghy davits threatened to snag our bicycle, we rushed to fix this.

We pulled in about 10 ft of scope on our chain and settled again for the night.  That should do it!  If they weren’t our friends we would have had to move as those on the mooring balls have the right of way here…  Lucky for us they took that ball! 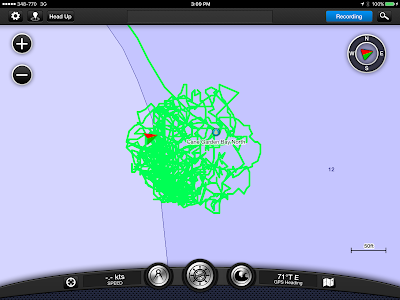 The night wasn’t anything like the previous one evidently because it was very peaceful with the exception of that one little bit of excitement... although we did move around a little bit...  Note:  When anchoring in Cane Garden Bay, make sure that you are well away from the mooring balls... Boats bob around in every direction!


The next morning we devised our plan.  We would motor over to Long Bay on Beef Island and if it looked good, we would stop there for the night before sneaking into Trellis Bay a day early in hopes of getting a good spot for their famous Full Moon Party.

We motored against the wind, glad that we had decided to skip White Bay, Yost Van Dyke because we would have had to beat against this wind all the way up the island!  Long Bay was beautiful and calm! 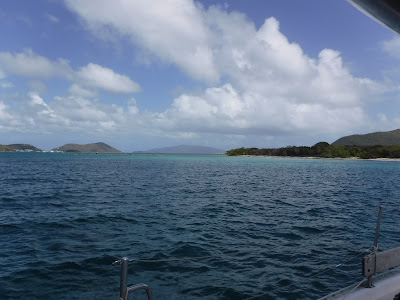 There is a long crescent beach of white sand and gentle waves… very protected by a reef that extends off the NE end of the beach between Long and Trellis Bays.  Even with a slight north of east swell it was very nice here.  We wondered why it wasn’t a more popular anchorage as there were several tourists visiting by car… 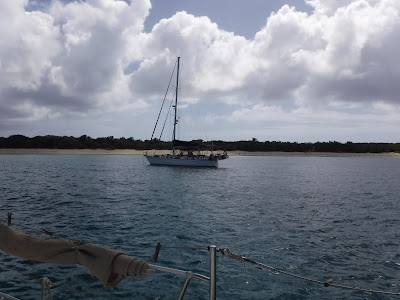 After settling in and having a quick nap, we took our Sundowners and stopped to pick up passengers for a beach run... that is, a run to the beach (not to be confused with a run on the beach which never happens).  We walked the beach and even picked up a four-legged friend along the way. 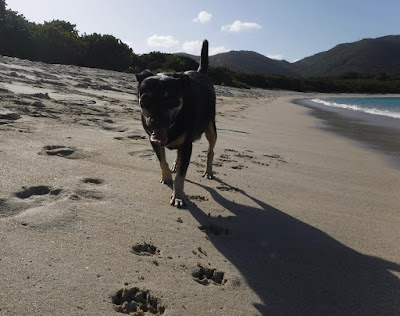 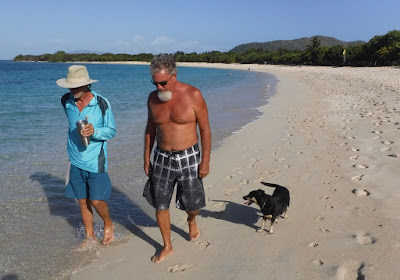 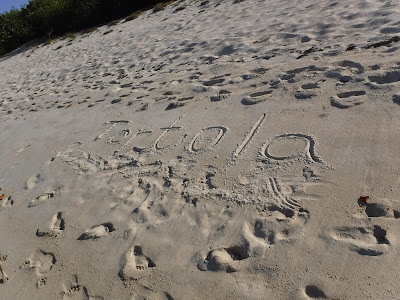 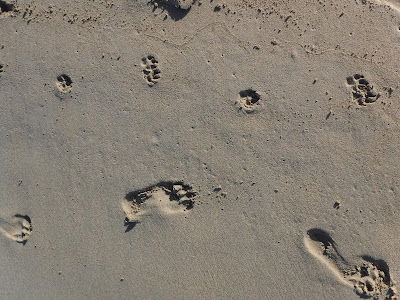 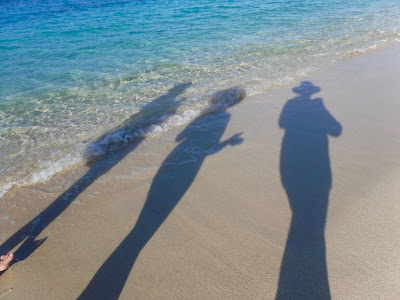 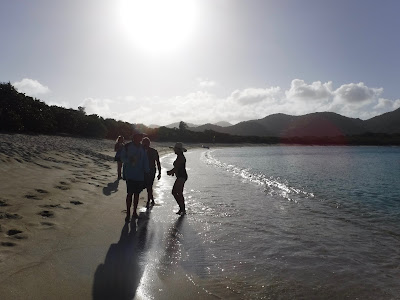 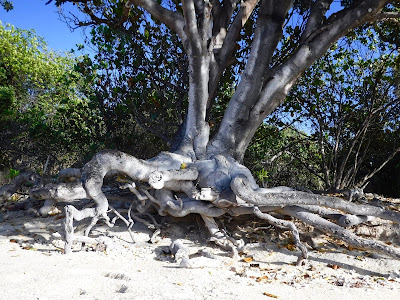 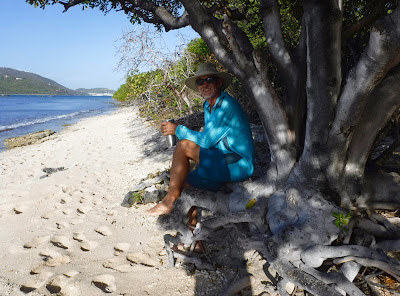 It was nice to get off the boat…  We’ve spent so much time in rolly conditions lately I felt the beach move beneath my feet! 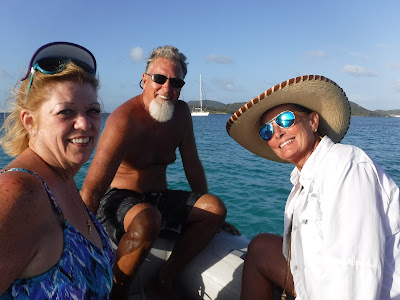 Back on the boat, we gathered up the pot of chili and fixin's I had prepared before leaving Cane and headed over to AU2.  There may have been a slight provisioning shortage aboard so we came to the rescue with dinner… delivered!  Eventually the party broke up and we returned home thinking it would sure be nice to stay here another day for some snorkeling… but the Full Moon Party beckons and we wanted to get into Trellis Bay and stake out our spot before the masses arrived… 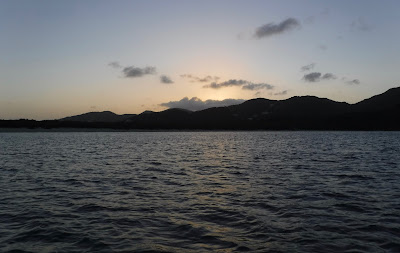 So, up early in the morning and off we went again!