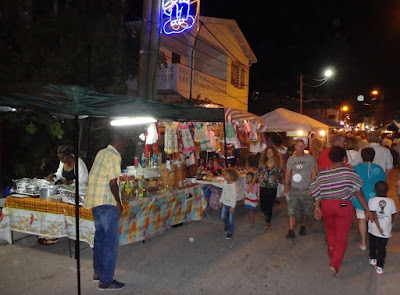 High Season in St. Martin is punctuated by a weekly event called Harmony Nights.  There are organised "busses" that will take loads of Cruisers from Marigot to the nearby town of Grand Case for the event.

Grand Case is the undisputed culinary centre of the island.  It is an unassuming looking strip of restaurants, shops and bars that come alive every Tuesday Night during the season. 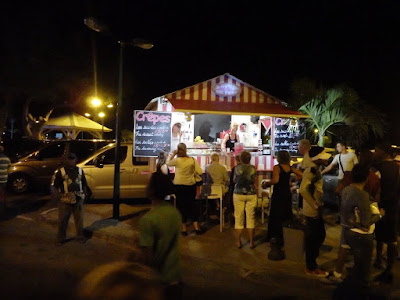 The streets are closed off and all of the shops remain open long past closing time to take advantage of the many tourists who come from all over the island for these evenings. 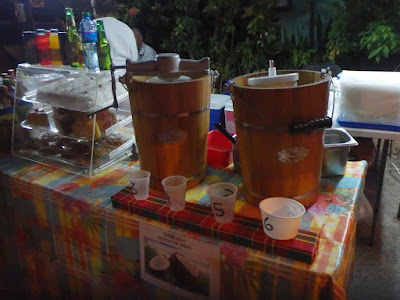 We left our bus and joined the throngs of people just walking about... We were looking for one thing.  We had heard from other cruisers that there would be home-made ice-cream available... and that it wouldn't last long. 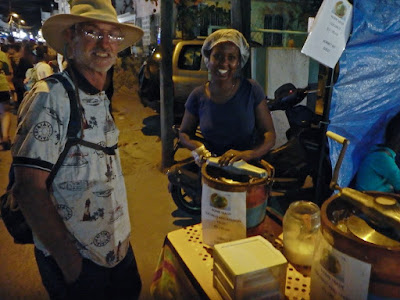 Ice-cream is very difficult to keep on the boat so we don't have it often... homemade ice-cream is hard to resist!  We found the vendor and had dessert first!

Walking along with our treats, we took note of the other delicacies offered.  We wanted to see it all and then decide what to eat, so we continued on past pastries, patties, and several restaurants... 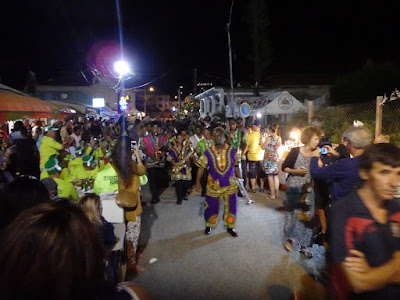 A low sound began to build into music and we wondered if there must be a band down the road... Soon the sound grew to almost unbearable heights as we discovered the crowd parting to allow the source to come through.  A band was leading groups of feathered ladies and behind them walked locals and tourists alike.  It was just like the Carnival Parade only on a much smaller, and more personal scale. 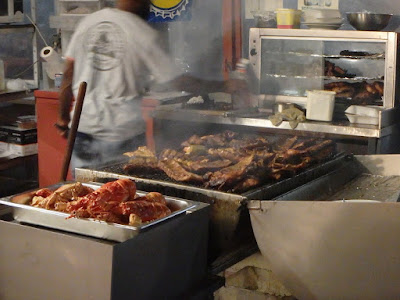 Soon we found a suitable place to eat.  I have no idea what it was called because one restaurant seemed to morph into the next with little to distinguish where one stopped and the other began.  Our noses led us to a pit with delectable BBQ sizzling in all flavours.  Of course this was Bruce's choice.

We stood there looking confused until one of the stressed out servers pointed us to a table in the back... where we joined two ladies on vacation from Canada.  We became fast friends as conversation flowed about the differences between our two countries with all that's going on... Health Care came up, of course and we had a fascinating discussion... ending with us thinking it would be really awesome to have National Healthcare...
Eventually we got food... the staff was overwhelmed with orders and it's a wonder we ever got noticed at all...  But the food was good and pretty cheap... we had fun. It was time to head for the rendezvous with our bus so we left and meandered back up the street... stopping here and there for another treat... Benets, not as good as those from New Orleans, but still pretty good.

Our tummies were full and our eyes were drooping as we thankfully collapsed back into our seats on the bus.  It was a fun night and one we hoped to repeat during our stay... There were still a few things we missed!

Click here to see the rest of the photos taken on Google!