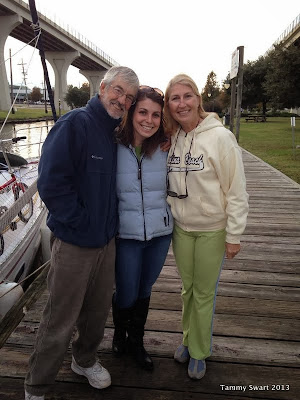 The day dawned sunny and COOOOLD!  There was frost on the dock, or so Bruce tells me… There was no reason for ME to go out in the cold!  Me and the kitties were snuggled in the warm bed.  Time to get up and finish shuffling stuff to make room in the v-berth while I wait impatiently for our guests.

When Brittney told me she and my Mother wanted to  come visit us for Thanksgiving I was beyond excited.  We hadn’t seen them in two months.  I know that a lot more time will go between visits while we cruise, but we’re just getting started… we’ve gotta break in slowly!

Weather kept us from making our planned destination, New Orleans so we stayed put in Houma, Louisiana for the week.  No worries, it's a nice place and less expensive than NOLA.  Early afternoon found me camped out in the cockpit waiting... I can’t describe the joyful leap in my blood when I glanced around, hardly daring to hope they would be here and saw them walking up the dock. 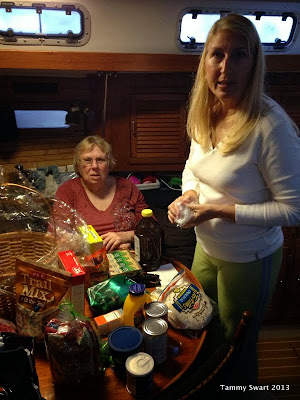 I’m sure my Mother has been stockpiling food for this trip for weeks.  Brittney has been baking feverishly as well despite my warning that I have NO ROOM on the boat for anything else!  They just don’t get it, so we had the cookie tower and baskets and bags of other things until the boat was overflowing with loot.  I guess we’ll just have to push it around until we eat it all! 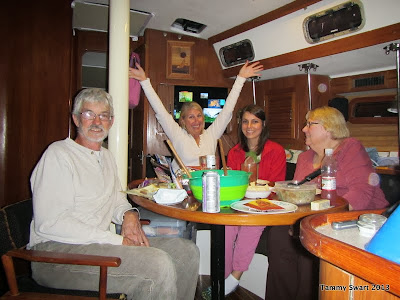 Brittney and Mother had done most of the food prep, so all I had to do was warm it up.  Brittney brought a small ham and fixins and I made some potatoes and gravy.  We piled around our little saloon table and ate ourselves silly.  Did I mention the three pies… for four people…

I had worried that my Mom wouldn’t be comfortable with the rocking of the boat with every passing barge, but if she was bothered, she didn’t say so.  The only ones uncomfortable were the cats and Brittney’s dog, Leila.  There was a lot of glaring and puffing going on...  The cats retired to the bedroom and scarcely came out.  Some of that could have been from the COLD temperatures we were experiencing, but their faces told me it was the DOG! 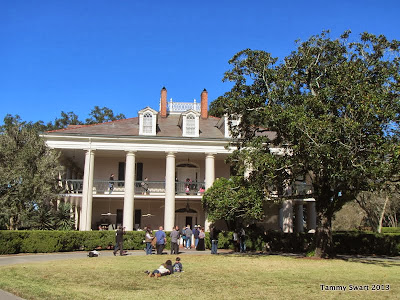 Two Whole Days!  What to do?  I suggested a plantation tour and Brittney agreed.  A Facebook friend suggested Oak Alley… (must remember to thank that guy) so we took off on another road trip!  Vacherie, LA. was about an hour away and we were soon driving down the oak lined road to the plantation. 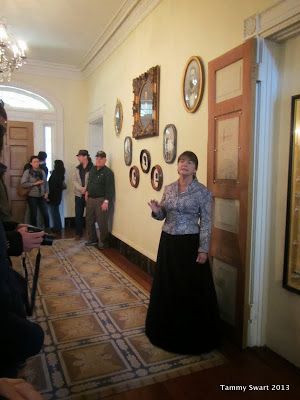 Bruce and I had visited a couple of others recently, but this one was a bigger production than the others.  Each has it’s own charm, differences and similarities.  Oak Alley seemed to have a less interesting  familial history, but it had slave’s quarters and we were able to tour the upstairs and take photos inside!

We had a great guide and Brittney soaked up every detail as is evidenced by her near verbatim recital in photo caption form.  She was paying attention!  No wonder she has done so well in college…

We drove from Vacherie, to New Orleans to take a quick spin around the town.  I have to say that it’s been so long since we did much road travel, I enjoyed the sights along the way, but the speed was disconcerting.  We drove through swampy areas and sugar cane fields for long stretches until we wound our way through the streets of the French Quarter.

Brittney hasn’t been so we had some things we wanted to do with her, Beignets and gator bites being two on our list… Can you tell we’re HUNGRY!?  It was late in the day when we arrived and the line at Cafe du Monde was unbelievable, so we shifted that to tomorrow’s list and went for the gator bites.  We found a place we hadn’t been to before, Ralph & Kacoos, and had an absolutely out-of-this-world delicious meal.  I guess if you’re going to make it as a restaurant in NOLA… you’ve GOT to be good!

With full tummies and nodding heads, we called it quits and headed back to the boat with intentions of returning early the next morning to revisit the Cafe du Monde.

Return we did, a little later than we intended… the Cafe was already packed, but we were starving, it was 9:30 and we were GOING to have our Beignets!!!  The line went swiftly and we got a little table packed in with scads of other people in varying stages of powder-fifcation…  We glanced around and wondered if those people wearing black had KNOWN they would be eating here, and would soon be covered in white sugar from shoulder to knee…  We ordered their divine coffee and a round of Beignets and waited…  I know…  Beignets are what happens when a funnel cake gets together with a sopapilla… but they’re an institution!  We must have them!  When our order arrived, I asked for sugar for my coffee…  the lady told me to scoop up sugar from the plate… duh!  I also popped a spoonful into my mouth for good measure.  Where else can a grown woman get away with mainlining sugar??? 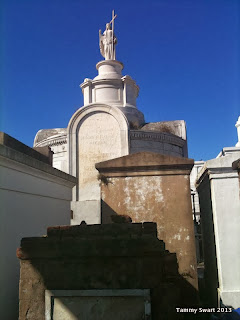 Cafe du Monde now crossed off our list, we moved on to our next bucket-list item… after a short shopping detour that is…  I was in the market for some of that olive salad Mufaletta stuff found at the Central Grocery.  I don’t know what it is about that stuff but I love it!  Brittney did some shopping on the way back to the car and bought some gifts, then we were on our way to find a cemetery!

We have visited many cemeteries in our travels.  I know… a bit macabre, but it isn’t really…  They’re beautiful and it is nice to think about the people and the lives they must have led, even though you don’t know them…  I will say that the cemeteries of Louisiana are second only to those we visited in New England back in 2004.  The above ground graves are just so different from what we’re used to, and they are beautiful.  We poked around St. Louis Cemetery No. 1 for an hour or so, the most notable and strange monument being the one that Nicolas Cage has erected for himself, in the shape of a pyramid.  Lots of controversy about that one…

There are graves marked with X’s with shell or stone offerings lining their tops, some kind of voodoo thing…  There are crumbling graves, almost piles of rubble… there are well kept graves and some in between.  There are walls with bodies stacked inside, there are huge box crypts with room for six or 40.  Some are for a certain nationality, Portuguese, French…  There is a partition, on the other side of which the Protestant folks are buried.  Cats skittered among the tombs leading me to wonder about the role of said cats as guardians of the afterlife.  Creepy!

We left the French Quarter still unfinished, maybe we’ll return there again some day.  We had some more mundane things to get done before we let our wheels, er um company get away.  We went back to the boat and had a late lunch, then finished our day with a super exciting trip to the grocery store and another round of laundry at the laundromat.  I think it’s been a while since Brittney has been to one… she was appalled by the child labor propaganda posted on the wall there… 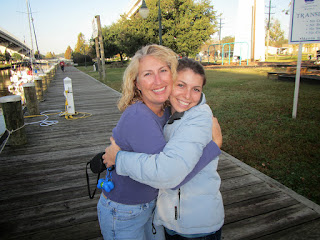 Our visit was coming to a close and I practiced avoidance (my usual way of dealing with unpleasantness) and busied myself with endless straightening up of things in the boat.  There was no shortage with all the piles.  A 45 ft. boat becomes very small when additional persons and their associated stuff are introduced…  Morning came and it was time for Brittney and Mother to go.  We parted with hugs and waves.  I soothed myself with thoughts of the next visits, one in December and another in January, hopefully in more tropical settings…

We turned our attention to getting under way.  No time to miss them, we have the locks and the Mississippi River in our near future.  Plenty of stuff to be thinking about, no time to be sad.  We made some nice new memories this weekend.  I was glad to see my family and have our first visitors as Cruisers!  Lots of stuff to be thankful for here… Aside from the usual, Country, Family, Health, etc.  We are thankful to be living this incredible life and for all of the factors that led us to this place, this time, and this day.  We are thankful for each and every individual one.