We were underway at dawn.  We were nervous.  We had a long way to go and had no idea how long it would take or what kind of traffic we would encounter.  And we were on our own... 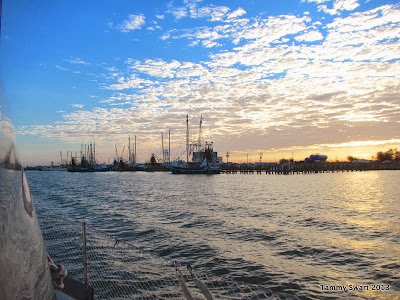 So many people talk about how stressful the ICW can be with the barge traffic being what it is.  Today, we were lucky...  We ducked into the ICW at one of it's most busy and congested spots, with little sign of it.    Being the Early Bird has it's advantages.

We motored along into light winds on the nose... it seems they're always on the nose...  We left the sail cover off in hopes that we would get some sail time in, but it didn't happen.

We took turns at the helm and I kept a close eye on my navigation apps.  You've gotta love Active Captain for giving the heads up at possible problem spots.  What a feeling of comfort to be able to look ahead and check out what's up there.

I seem to have become the designated radio personality on board Dos Libras.  My first few times speaking to the barges was tentative... but with the overwhelmingly polite and helpful response, I've gained confidence.

We scan the channels constantly, but most of the chatter is on channel 13.  That's where the Barge Captains hang out.  I love the relaxed protocol on 13.  There's no repeat the boat name three times, then your own boat name, wait to switch to channel 68 or wherever...  just hail and spit it out.

There was one exchange between us and two opposing barges, loaded double wide and stacked deep approaching a curve... We did as we were asked and were respectful and after it was done, the oncoming Captain thanked us for being cooperative.  My confidence swelled as we exchanged pleasantries and went on our separate ways. 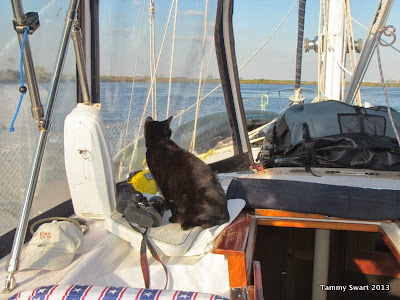 We wonder how long it will take the cats to become used to this life.  Jezabelle seems to be having a hard time adjusting her comfort zone.  She looks sullen all day, but quickly revives when we drop anchor.  Jetsam has surprised us with her intrepidness.  She has come out on deck while underway many times.  She takes a look around, maybe a stroll... then returns to her slumber on the settee.


We made very good time and arrived at Taylor Bayou mid afternoon.  Of course, that doesn't mean much at this time of year.  We have to plan to be anchor down long before sunset at 5:30, which is why we have to leave so early in the morning.  We turned into the Bayou, finding it much wider than we expected and with marvelous depths.  I had figured we would be in a ditch inching along in shallow water.  We easily found the Outfall Canal and turned in.  We didn't go far before dropping anchor near the shore in 15 ft.  We disturbed a small flock of shore birds but hey, there's plenty of room here for everyone!


We have not seen a single other sailboat since we left Galveston Bay.  I was correct in my impression that the Texas Gulf Coast is an uncommon cruising ground.  Another sight we've not seen is that of fishing boats.  Cruising South from Galveston,  we found that we were seldom alone with all the fishing vessels out zipping around day and night.  The absence of other non-commercial vessels is a little disconcerting.  But... the overall solitude is VERY nice. 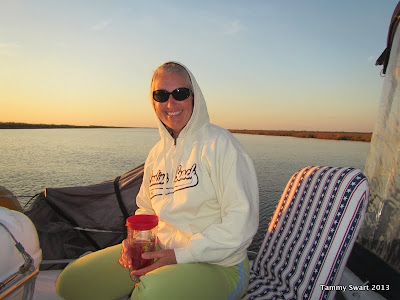 We had hoped to have a sundowner on the back deck...  We had read of the mosquito problem and I have even concocted my own repellant brew, but our hopes were dashed!  Just as we got settled and comfortable, the clouds of scrawny hungry mosquitos gathered around us.  Even Bruce was not immune to their voraciousness.  I kind of felt bad that they had so little to eat out here.  Made me almost want to give 'em a little taste...  Glad we didn't, because a good number of the little buggers came into the boat and plagued my night!

We were forced down below, which wasn't a bad thing.  I was hungry anyway, it was long past MY dinnertime!  We threw together some Frito Pie and enjoyed the disconnect time.  The waters were calm and flat and we were in bed by 7:30.  I think our sleep patterns are going to be very confused. 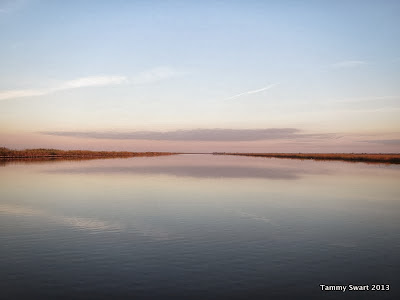 We had an utterly peaceful night, chilly, but not too bad.  We snuggled with the kitties and were up again by 4:30 am.  Somehow, even with nothing to do, it is a struggle to get ready to go by 6:30... but go we did, leaving this beautiful still place behind.