Bruce and I were, once again, up before dawn and under way.  We were running from the weather and didn't want to take any chances that we wouldn't be securely tied to the dock when the forecast crazy North winds hit the Lake Charles area. 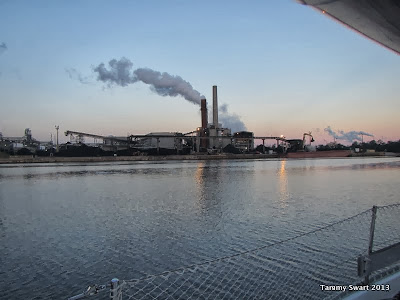 We lazily left the Oxbow Anchorage and re-entered the Calcasieu River.  It is so beautiful here.  Even the industrial sites have a certain visual allure.

We were up the river, across Lake Charles and tied to the dock in just over two hours!  The winds were from the North, but the front was still hours away.  We MADE IT!

It seemed strange to arrive at our daily destination with time to actually enjoy it.  We washed down the deck and made sure everything was ready for the big winds, then we hopped onto our bikes and went in search of the Marina Office and adventure!

Lake Charles Louisiana has such a beautiful waterfront.  They were damaged by Hurricane Katrina but we saw little sign of it other than the ruins of an old casino on the other side of the lake. 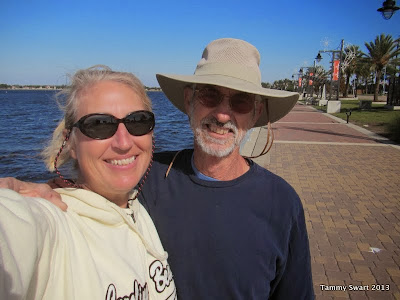 The City takes obvious pride in it's assets.  The Bord du Lac Marina seems to be an odd addition to the waterfront.  Our guess is that the City took advantage of a government grant to build transient dockage along the waterways, but they really don't know what to do with it now that they have it.

The office is in the Civic Center and we imagine that if we hadn't checked in, nobody would have noticed or cared.  The prices are LOW, but then... there is no restroom/shower/laundry/pumpout available.  It's just nice floating slips with water/electricity/free wi-fi.  Did I say FREE wi-fi!?  This is a huge offset against the other shortcomings.

We rode our bikes along the nearly deserted Promenade.  What a gorgeous day!  It was a bit cool, but not too windy.  Let's get some exercise!  I realized that we hadn't touched land in three days!


Today is the day after Veteran's Day.    Living on the boat and traveling from place to place, we are somewhat out of touch with reality.  The Day had come and gone with our only notice being the Facebook tributes of our friends.  So, it is fitting that we found this place, just a day late... but it gave us a chance to pause and appreciate the service of Veterans past and present. 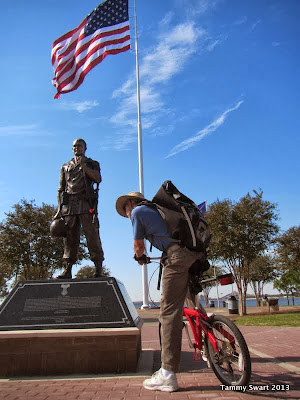 The City of Lake Charles has done a beautiful job of recognizing her Veterans.  The designation of such a prime location to her Heroes is just awe inspiring.  Every one of them has his/her name and place. 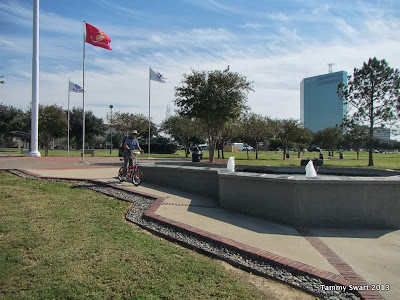 I was most impressed by the subtle way in which the Memorial brings all wartime together in one place and kind of makes the past and present seem as one.

As I gazed into the reflecting pool and then out across the sparkling lake, my thoughts went from these Veterans unknown to me, to my own Father who was a Veteran.

He was very private about his Military Service and I know little of it.  In retrospect, it seems as if it colored his entire life, and in certain ways, my own.  Funny how I had to leave everyday life and experience the chaos of Cruising to really have time to appreciate this.

We moved from a Memorial of one kind, to a Memorial of another related kind.  The City of Lake Charles has brought pieces of the World Trade Center and the Pentagon here to their home shores. 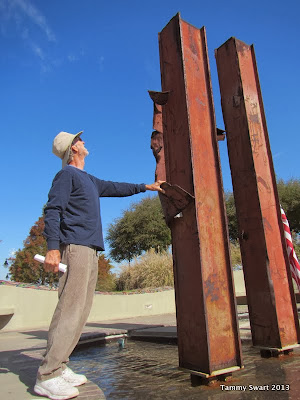 What an unexpectedly poignant experience this was for us.  We remember the day, but somehow it seems more real by touching these metal beams from the Tower.

It is as if touching the cold twisted steel brought my mind to that place like nothing else has.

The beams rise up from the reflecting pool, with stepping stones to walk across.


The pool is surrounded by an undulating wall, topped with beautiful multicolored glass pieces, one for each of the lives lost in the tragedy. 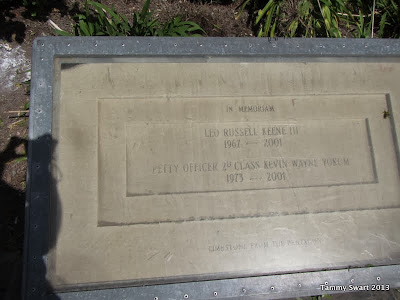 A concrete piece of the Pentagon is protected but displayed for all to see. 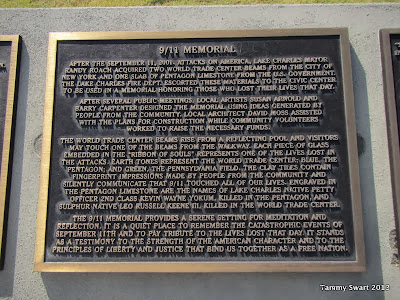 And there is a dedication explaining the significance of each and every part of this unexpected treasure here on the Lake.


We left the 9/11 Memorial and continued on to yet another memorial... of a more traditional kind.  I LOVE cemeteries! 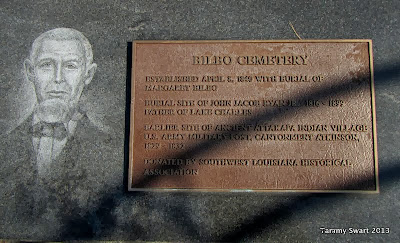 Maybe it's a little bit macabre, but I love looking at gravestones, making stories or wondering how the people lived and died.  This cemetery was very small, but housed the mortal remains of John Jacob Ryan, who is considered the "Father of Lake Charles".  I love looking up information about the people and "connecting the dots".  So many of the names in the article about Mr. Ryan are found throughout Lake Charles.


Luckily the cemetery was small, or we never would have made it any further... 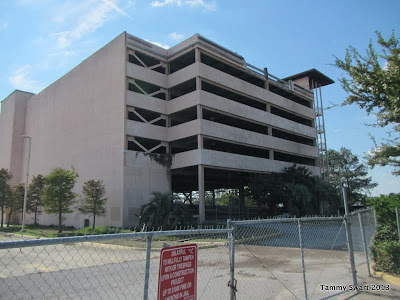 We moved on and passed by the ruins of an old Pre-Katrina Casino.  I couldn't find information on it other than the fact that the guy in the marina office sited it as an "attraction".  It was inaccessible as we rode past.  I have to wonder why it has remained in this state on the shores of such a beautiful lake. 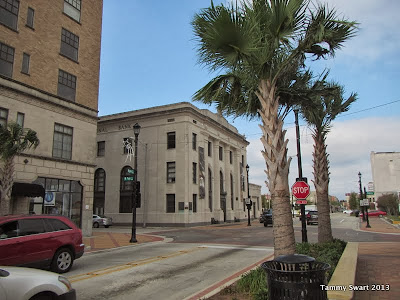 We stopped briefly at the Visitor's Bureau and then backtracked around the lake to the old Downtown Historical District.  We were living on borrowed time as we travelled the cobbled streets in search of a place to have dinner the following night.

Bruce found a socket that he had been searching for, two in fact, at a neat old place, Keith's Pawn Shop 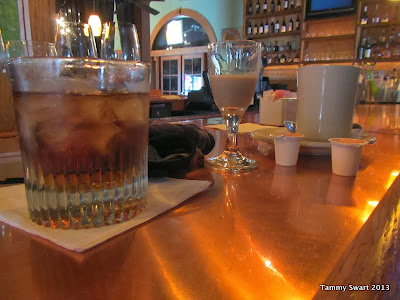 We peered inside one place and found such an inviting looking bar, we decided to pop in for a drink while we looked over their menu.

Just LOOK at how warm it is in there... Bruce made the better drink choice, Coffee with Baileys.  I had a rum.

We were in for a rude shock as we left the warmth of our barstools... the winds had arrived.  We donned our coats and bundled up as best we could for the wild and fast ride (downwind) to the Marina. 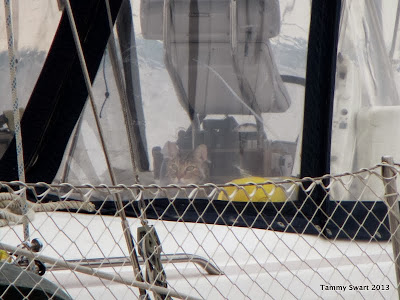 When we arrived home, we found Jezabelle keeping watch for us inside the cockpit.

The winds gusted outside all evening and through the night... Our lines held us securely and the boat hardly moved.

The next morning, we remained within the warm confines of the boat until mid afternoon when the winds had come down some. 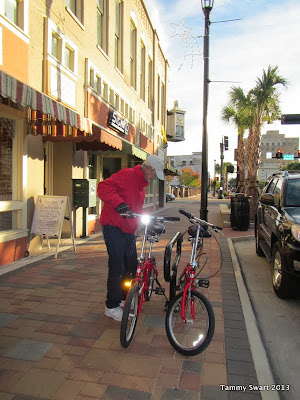 We rode out once again to find a market to look for local delicacies.  I almost bought Boudin, but I chickened out.  I need advice for this purchase from a local.  There will be other chances.

We found the grocery prices in this little market to be SO much less than prices we pay at home in Texas.  I'm thinking Texas has been cheating us!  I bought some very cheap meat, which we dropped back at the boat and then we headed back out to our dinner destination. 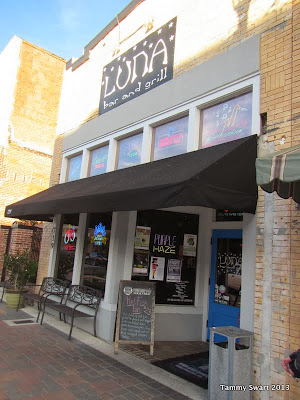 We had chosen a place called Luna for our dinner.  Unassuming on the outside, but richly decorated inside and the food was relish! 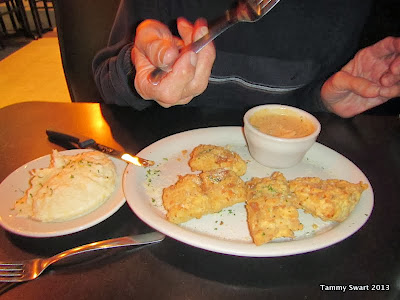 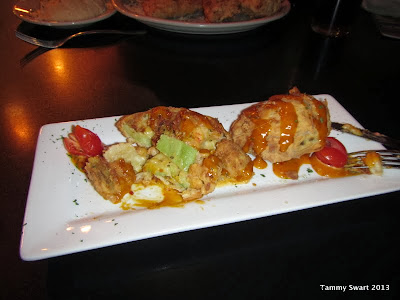 I found crawfish stuffed avocado that was such a different fried avocado from those I'm used to, but delicious in a whole new way.

We left there in daylight.  We had dinner early to avoid being out after dark in these cold winds.  We had one chilly ride back to the boat and spend the rest of our evening here enjoying the wi-fi with a Netflix movie.

We reviewed our plans and found that we would be forced, by weather, to move on in the morning.  In order to be in Delcambre by the next cold front, we would have to move on.  So we took advantage of our heater as tomorrow would be a far colder night for us.

Our recommendation?  Put Lake Charles and the Bord du Lac Marina on your float plan!  Enjoy this slide show of all of our Lake Charles Photos!