Today was our "nervous" day.  We would deal with many miles, much traffic and our first scheduled bridge opening.  We left the peace of Taylor Outfall early with the sun coming up on the glassy water.  We turned our nose out into the ICW, ghosting past sleeping barges banked against the shore.  There was little chatter on the VHF at this hour.  For sure, getting an early start is beneficial, especially when you have tricky waters to navigate. 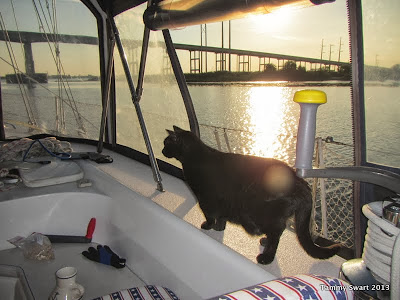 Jetsam instructed us past our first bridge for the day, then disappeared below again as we came out into a wide intersection. 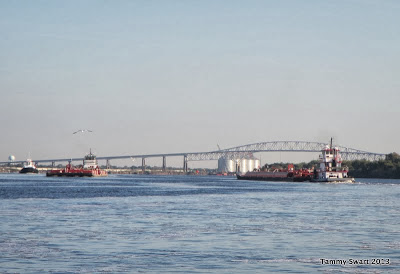 There were only a couple of other vessels out there maneuvering around and we skirted them and proceeded on our way. People were out having their morning run along the levee that protects the homes just on the other side from these calm waters when they aren't so calm.  I can't imagine how they must live with the threat of hurricanes.  But life along the levee is good today!

We were traveling in the Sabine River, which borders Texas and Louisiana.  We hugged the Texas side for as long as we could, clinging to the skirts of our home state.  I was a little... not sad... but something.  Reluctant, maybe, to leave home, but excited to see what's up around the bend... both figuratively and literally.

We waved goodbye to Texas shores and I thought,  how unassuming it looks... just slipping away.

We made the last twists in the river and caught up to St. Elmo as we both began to pass Sabine Lake.  St. Elmo suddenly dropped speed down to just over 2 knots.  We had been cranking along at 6.5 knots  towards our scheduled bridge opening, and we hung back wondering if he would get going again.  He drifted a bit and I hailed him on channel 13 to see if we should wait or proceed around.

He told us to go around, that he would hang back.  We powered, up slowly gaining momentum from a near stop.  But as we drew abreast, Elmo powered up again and we went quite a ways before realizing that we would not make it around before the bend, and the oncoming tug just appearing there.

To compound the situation, there was a huge load coming hot up on our stern as if we weren't there.  I hailed Elmo again requesting his recommendation and suggesting I hang back.  He said he would contact the tug gaining on us both to determine his intentions and I listened as he tried in vain to contact the Mary Roberts.  Radio silence.

Things seemed to happen very quickly at this point, I found myself bouncing from the turbulence behind St. Elmo, a new tug was growing larger as he came on towards us and NOW, Mary Roberts decides to grow vocal cords as he asks us if we WANT TO DIE!  Well NO, we do not but we have nowhere else to be as you barrel up our butts!  None of this did I actually say on the radio in answer to his complaints about us "stopping" in front of him.  Well I was actually stopping behind the now stopping St. Elmo due to the oncoming newcomer!!!

In the end, the oncoming tug passed us all, Elmo hung back as did we... to let Captain Nasty continue on, then Elmo waited while we passed him.  We fell in right behind Captain Nasty for the remainder of the day.  And NO, he did NOT have anywhere important to go...  But he did provide a nice escort for us, especially in the tricky parts of the river.  Sweet!

All of this happened while we were talking to the folks in Lake Charles trying to get a time scheduled for us to pass beneath the Ellender Bridge.  We originally (before all the ruckus) scheduled 12:30 pm.  After all the drama, we were looking more like 2:30.  We contacted the bridge and they said to call them when we were about an hour out.  This was more doable.  We were dealing with some current against us by this time, but Mary Roberts provided a bit of a draft we could ride. 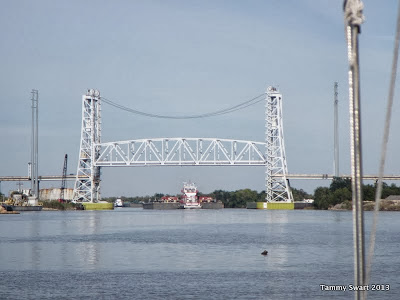 Next thing we knew, there was the bridge.  It is so difficult to determine scale when looking at charts and chart-plotters.  We came around the bend and Ellender had us in view.  They told us to come on as we watched Mary Roberts pass easily beneath without a lift. It's in the 50 ft height range when the bridge is down.  They would raise it to 100 ft. for us to pass.  We heard the whistle blow signaling the bridge was lifting.  Traffic stopped and up it went.  It was amazing how fast it happened. I radioed the bridge tender for confirmation that he had our 63 ft. clearance and he assured me that he gave us 100 ft.  It did NOT look like it as we passed beneath the trestles of the bridge.

And then we were done!  We heard the whistles again, signaling the bridge was dropping.  We hardly had a chance to turn around to see it go, before it was back down, traffic resumed and the bridge tender was standing in the doorway waving us on! Just past the bridge, we left the ICW and followed Mary Roberts into the Calcasieu River.  I still can't get over how huge these waterways are.  My experience with rivers is mainly limited to the little Nueces of my childhood.  Narrow, shallow and full of tree logs.  Not THIS river.  Wide and deep.  I like it!

We literally said goodbye to Mary Roberts as he banked the barge for the night and we continued on to the Oxbow anchorage as planned.  I hoped to chip away at the stereotype that sailboaters are all rich assholes to be hated and tormented in my own small way. 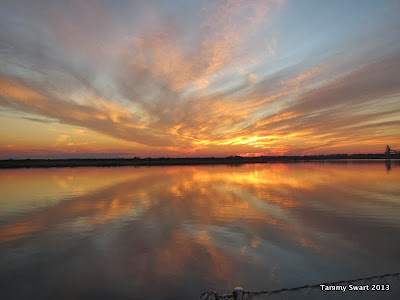 We entered the anchorage by the north mouth.  An oxbow is sort of a loop where a waterway strays off and returns to itself.  We expected North and Northeast winds so we opted to anchor on the North side.  We slowly entered with decreasing depths.  The depths ranged from 7 to 13 feet which is MUCH less than what the chart shows... but it's enough for us.  We dropped the hook and turned to see another stunning sunset. 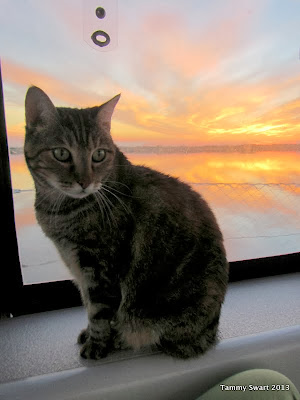 Again we were swarmed by mosquitos, no way could we sit outside.  We tried sitting inside the cockpit enclosure for a while, but even that became full of buzzing mozzies very quickly.

We were forced below for the night.  We made dinner in the pressure cooker, roast, potatoes, carrots and onions.  Yum and warm!

We nervously checked the weather and tried to see where the forecast massive cold front was and how long we had in the morning to make our final run for safety.

It looked like we were in good shape, with the front still up in Kansas.  No worries.  We were only about two hours from tomorrow's destination.  Bord du Lac Marina would be our refuge for the big winds and deep cold of the next couple of days.

Tonight, we slumber in quiet (except for buzzing) peace.