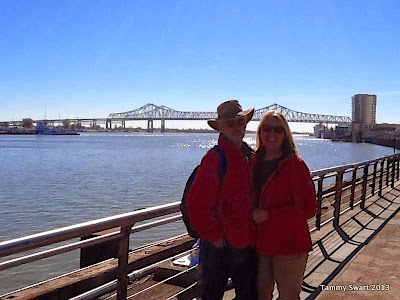 Hearing a cruiser friend talk about their Mississippi crossing being the most scared he’s ever been while cruising had a certain anxiety producing effect upon my mind. That, coupled with another cruising couple being stuck in New Orleans for some time due to the raging river, had me building up a mental picture that wasn’t pretty.  It was to be endured, not enjoyed.  We would have to get through it.  It must be done if we are going to go on. I began to wind up more tightly as the days leading up to our crossing drew closer…

A trip to the French Quarter a few days prior to our crossing did wonders to quell my anxiety.  We stood beside the mighty river and took pictures with it’s benign and sparkling self as our backdrop.  If only it could be like THAT when we crossed.  Chances looked GOOD! 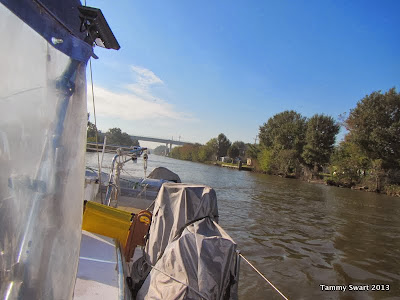 We made good time leaving Houma, LA., where we had spent nine days.  Nine days?  How could it be NINE days???

We were pinned by weather and ended up spending Thanksgiving in Houma with our family. 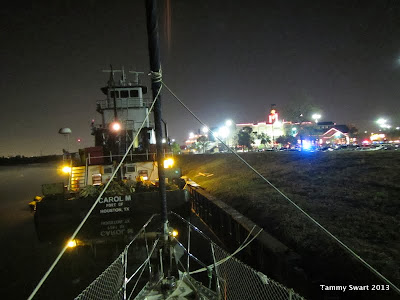 We reached a spot along the ICW called Boomtown.  It is just off the parking lot of, and owned by the Boomtown Casino.  Cruising folk often visit the casino and find food and libations there, but we stayed on the boat.  We were prepping for our challenging day. 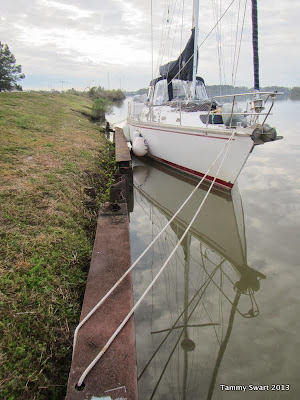 The morning dawned calm and beautiful.  We had spent our evening studying the route, making notes, and jotting down numbers.  We were ready!  We drifted off the dock and got going, not too early, there was a bridge less than two miles away that didn’t open before 8:30 am.  No pre-dawn start for us today!

I wasn’t afraid, just keyed up.  We needed to be on task for this, and we were, each in our own way.  Bruce wasn’t worried at all.  I was still feeling that now familiar feeling of “what’s next?” that we deal with on every travel day.  Not fear, just a hyper open-ness, ready to absorb, process and dispatch each new situation as it is encountered in rapid fire fashion.

There is information out there for Cruisers.  Information that tells you which radio channel to use in speaking to the bridges and locks.  There is information telling you which side to have your fenders on for the locks, and how it all works… We had read it all.  Still, there is an an element of uncertainty.  What will the winds be?  What current will we encounter.  Will there be a line of commercial traffic to contend with?  Will the river be full of logs for us to dodge?  How long will it take us, how far can we get before dark?  But still, reconciling all of the images formed from reading about it, with those coming in through our own eyes can be exhausting!

We made our way along new waterways, saw nice homes, huge ships, all manner of tugs and barges, shoreside industry, every type of bridge...and the city of New Orleans from the water…  It was a day of visual overload but we dealt with every new challenge, no time to process one before we had arrived at the next.  It was non-stop… all day.  Well at least it seemed like it.


Once we had passed through the bridges and locks and river, and arrived at our destination… we realized that it was only about 2:30.  We had only been on the move for five and a half hours.  It seemed like 12!!!  The day was only half over and we were done!

We fueled up and found our slip.  We grabbed a snack… we hadn’t eaten anything but some pie all day.  There was no time…  We settled in and began to mentally pick through our day.


We did it!  It was almost too easy.  We had nothing but good luck with each of the obstacles in our path.  We were prepared and made all the right moves.  We contacted bridges and locks and the New Orleans Traffic folks all in timely and good form, and on the right VHF channel.
We encountered relatively little commercial traffic.  The river, whose reputation had been so bad, treated us with gentle kindness and buoyed us on our way to turn us out into the Industrial canal.  There were no scary logs or horrific current.  Just a gently undulating surface, and giving us a wondrous kick as we glided beneath the twin bridges and past the sights of NOLA from a new perspective.

Gone is the “fear of the unknown” that is New Orleans for me.  I’m sure there are new things out there waiting to get me, but for whatever reason, this one held a weighty place in my mind.  It is now dispatched to memory as a good experience where a bad one could have been.  I have found this to be a common occurrence on this trip. Things that I have anticipated have not materialized.  Everything has been better or bigger or less difficult than I expected.  I am struggling now not to become complacent.  I can’t expect this lucky streak to continue on indefinitely.  Must remain on task and vigilant.  Must not be lulled into a false sense of security.  There are lots of new experiences yet to be conquered… but for now… we’ve got the Mississippi and her associated bridges and locks… LOCKED DOWN!