Where Is The Line?

This we have discovered!  Our time in Mandeville has been idyllic.  The town is lovely and the dock is FREE!  The unfortunate part of Cruising, seems to be, that we tend to move on the good weather days, and hunker down in the towns for the bad ones.  This means that we rarely get to spend much time exploring the places we’ve stopped.  This is the primary reason that Cruisers should never have Schedules!

Ours is not exactly a schedule… but we would like to be in the Tampa Bay area by or around Christmas…  Our Daughter has given us a pass, so we really don’t HAVE to be there for the big day… but it’s winter here… and it’s WARM in Florida!  So we are somewhat motivated!

So… with these factors in mind, we chose to move out from Mandeville for a two day weather window which would get us easily to Pass Christian, MS. for the passing of the next cold front.  We had a forecast of light winds with 40% chance of showers… nothing we couldn’t handle.  The day before, we vacillated… should we remain here and enjoy the FREE electricity and water at this nice safe dock?  Or should we move on and get that much closer to our immediate goal?  Maybe we’ll stay put…

Morning dawned with a light fog out on Lake Pontchartrain, but none on the land.  If we wait for the perfect forecast, we'll be here another week!  Bruce and I reconsidered… LETS GO!  We quickly got ready and tossed the lines.  We motored out onto the lake and into the fog…  No worries, we’ve got the radar and our track and great charts and iPad apps and the enclosure to keep us warm(ish) and dry…

The lake was so flat.  The winds were light and a non-issue… but this FOG!  I reviewed the information we have on the obstacles ahead.  Our plan is to exit the lake via the Rigolets and proceed to the ICW for a short jaunt West and into the Rabbit Island Oxbow anchorage (if it wasn’t full of dredging vessels as reported by a local).  Easy day, a couple of bridges to open and we’re there!

But the FOG… persisted.  I began to call the first bascule bridge well out in the lake to make sure that there was no restricted opening schedule.  I had conflicting information and wanted to be sure.  We were nearly there before I could hear the tender answer. She was in a tizzy because we had not heard her answer… good to know, we can transmit on 25 watts, but can’t hear the response.  I soothed the tender with apologies and found that there was no restricted schedule for opening.  No worries, we’ll call her when we get close.

So… we carried on across the lake in the FOG.  Surely it will lift by noon… Noon came and went, no relief.  We arrived at the bridges, one, a railroad bridge, was up.  The highway bridge had to lift for us.  We waited briefly and then passed close to the left side of the RR bridge, then darted to center to be swept through the raised bascule gap by the current…  and then back out into the blind FOG.

We had confusing information on our chart resources about the next bridge… where was the opening?  We headed blindly towards the center point on our chart… found the low causeway materializing magically in front of us within 1/4 mile… then turned left to follow it in search of the raised opening point.  Finally, we saw dark blobs on the water which turned out to be the fenders leading to the highest point where we would need to pass…  Relief washed over us both!  We FOUND it!

Next, we turned in the fog to the North Shore Channel entrance and a green day marker popped up!  We could see only one at at time.  Bruce drove while I navigated our way on the iPad.  We had the Chartplotter with radar overlay which was doing a nice job of showing us where the shore and obstacles were.  There were NO other boaters out on the water, thankfully…

We arrive at the Rigolets and turned into this wide and deep waterway.  I was grousing because we could see NOTHING of the place.  This is the whole reason we’re doing the ICW, so we could see the sights!  No sights today!  Well, we made our way through the Rigolets with a helpful current, but not too much as to cause difficulty.  We had one more obstacle. 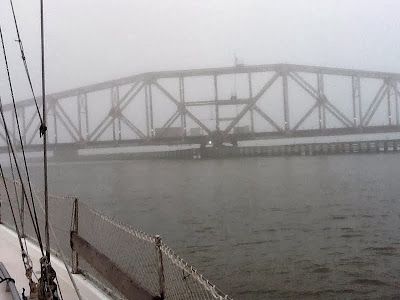 I began to hear a noise… Nothing on radar or AIS to show what could be making that sound… The TRAIN!  There is a RR bridge up ahead.  I called the bridge and was told that he had three trains to let through before we pass.  We’re two miles out.  I reduced speed and we proceeded until we saw the huge trestles appear in the FOG. 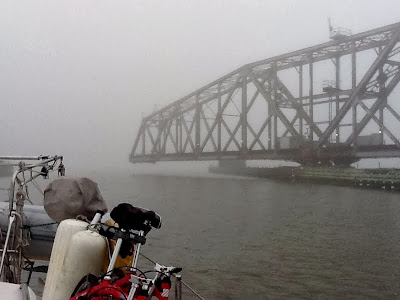 One more train to go, we did small circles.  At least we can see the bridge and the fender way leading through the pass.  Finally, we get the all clear and the huge thing slowly and silently swings open.  Amazing…  We darted through, told him thanks and in two minutes, we were turning towards our final destination! 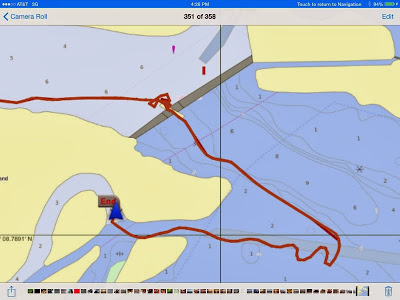 That’s when the shit hit the fan… In blind FOG, with the Rigolets current spitting us out, we overshot the ICW channel and were headed towards the shallows!  Holy Crap!  If we go aground here, we’re screwed!  There is a barge coming about two miles out… how long do we have to get through this before he’s upon us… like 15 minutes..

I overcorrect again blind… and we shoot out of the channel and safe depths… again and again, before Bruce spots a channel marker, leaning way over having been mowed down by some heavy vehicle before us… With a visual, I got it under control.  We sighted the red and green markers at the opening to the ICW shoreline and I made a final push, powering up again.

Ahh calm.  Right there is the entrance to the anchorage.  It all happened so fast.  My knees were still shaking from our experience with the current.  We popped into the anchorage and found one sailboat, no dredges.  We’re HOME!  We could see nothing but the sailboat, a shoreline and two crab pots.  We anchored and relaxed in the cockpit to talk about our day.

Were we foolish to set out when we did?  Where is the line between foolishness and confidence? Where is the line between prudence and fear?  We went on the information we had and nothing was said about fog.  Fog ALWAYS lifts… right?  That’s what we thought.  Why were WE the only ones out on the water today?  Did we not get the memo?  But if we let fear be our guide, we would never leave the couch!

All day, I kept thinking that others would say we had made poor choices, that we were doing something unnecessarily dangerous… but were we?  We had radar and AIS and VHF and many chart plotting tools…  This day would have been a piece of cake had we been able to SEE.

Sure, lots of things could have gone wrong, but they didn’t.  There are never any guarantees on the water, or in life.  You deal with what you’re given.  You make decisions with what you have.  It would have been easy without the fog, but it wasn’t HARD with it.  But it has me questioning… what constitutes safety-to-foolishness factor.  Some would say going Cruising is foolish in itself… and yet, here we are.

We learn.  We grow.  We continue to evolve in our ability to determine… where is the line?

PS there were no other pictures available as they are all in my camera at the bottom of Pass Christian Harbor... They would have been fabulous!