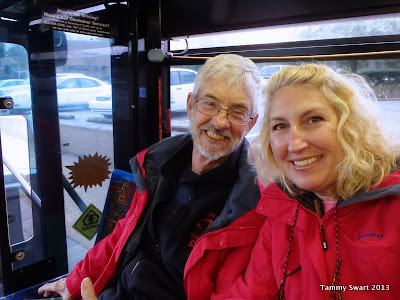 When my daughter was in about the sixth grade, she took the initiative and found a way to get to the Mall without "bothering me"...  She took the City Bus, and was very proud to tell me all about it when I got home.  My reaction was not exactly what she had been expecting... I was appalled!  For that, she got grounded for a MONTH!!!!

People who live in states where public transportation is widely used would not understand my reaction.  But people from Texas, where EVERYbody has a car... might get it!  Now... here we are, without a car of our own, and we're riding the BUS!

Thanks to a kick in the pants from Carolyn, our Facebook Friend... We got the bus schedule off the internet, and set out in our rain gear to find adventure in Pensacola, FL.  It was a bit chilly but my old optimism had returned once again and I just KNEW it would be a great day to get out and explore! Who knew that the bus ride itself would be counted as one of the highlights of our day?

We walked several blocks to find the transfer station, arriving just a few minutes early... enough time for a chat with the patrons who had arrived before us.  While Bruce was chatting it up with "Army Guy"... I had the pleasure of meeting (after he gave me a hard time for being dressed in Capri jeans) "Mr. Sixteen Mil".  His story:  He's ex military and loves living the life of leisure here in Florida.  He has travelled all over and spent years living in Panama, where he keeps the sixteen million dollars.  He's on his way to see his sweetheart, who wants the big "I DO", but he doesn't because she won't sign a pre-nup saying he can leave his millions to the charity of his choice after his death...

Our bus comes and we say goodbye to our newfound friends...  Before we can make it around the block, our bus begins making noises.  ALARM kinds of noises!  The driver pulls over to the curb, stops the bus and begins the process of figuring out what the heck is wrong!  You see, the lights come on and the bus shuts down, and that's IT!  We're stranded!

At this point, there are two stories unfolding for our entertainment pleasure...  Story one is the bus saga.  There are people who need to get to work but it all works out nicely as a van comes to get them and gets them to their jobs.  Thanks but we'll wait.

The second story is the poor dude in the back talking to his Ex-girlfriend on the phone.  Evidently there has been a breakup here two days before Christmas.  He's carrying her shirt and a small gift that he wants to bring to her at work today... and he needs to come by her place after work to get his sweater from her closet and the gifts he left there... 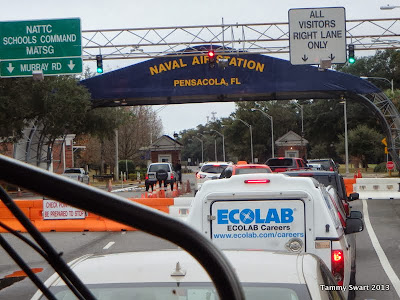 We're just happy that this equipment failure is somebody ELSE's problem...  A new (older) bus comes and we board.  We get on our way and chat with the driver as he tries to make up the lost time by skipping stops!!!  Yep!  I hope we don't get "skipped" for our return trip!!! 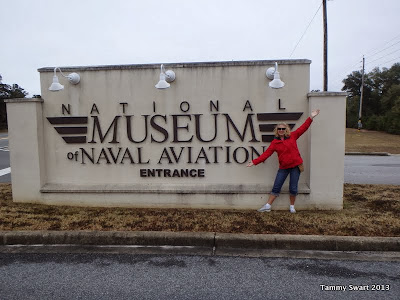 We make it to our destination... the National Museum of Naval Aviation!  The bus spits us out and I worry, because we'll have a different driver for the return... somebody who doesn't know we're out here! 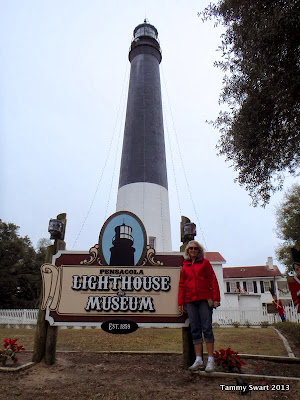 Top on my list-of-things-to-see is not the Naval Museum, but the Pensacola Lighthouse just up the street.  So, we hoof it up the road about half a mile.  No worries, it's cold now, but it's gonna warm up... I'm SURE of it! 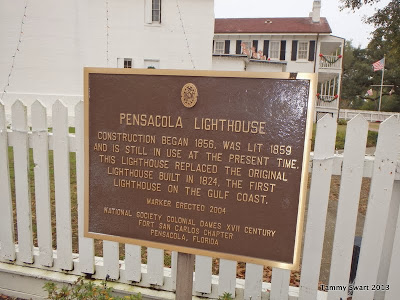 I just LOVE lighthouses and I'm super excited about climbing this one!  We've had the opportunity to climb exactly THREE!  Only this one since we left home. 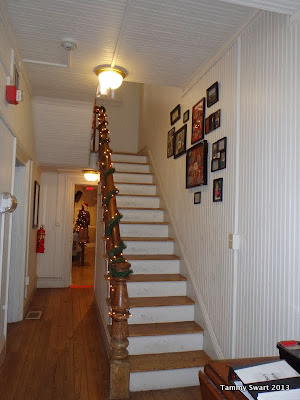 We enter the Lightkeepers quarters and see the exhibit there, telling about how life was for the keepers through the years.

There are two sides to this house.  The light is automated now, so none lives here, but back in the day when it was tended by humans, two families lived here.

There would be the Keeper and the Assistant Keeper.  Each of them had one side of the house for their families.

The two sides had separate stairs and were identical.  Living quarters downstairs and bedrooms upstairs.  Very small but nice. 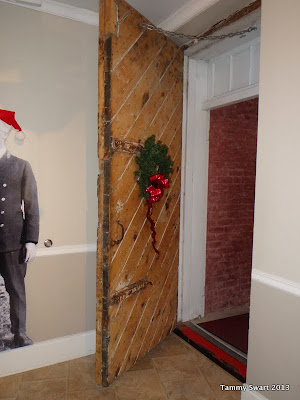 The home was attached to the lighthouse with kind of a mud room, where the doorway to the tower beckons... 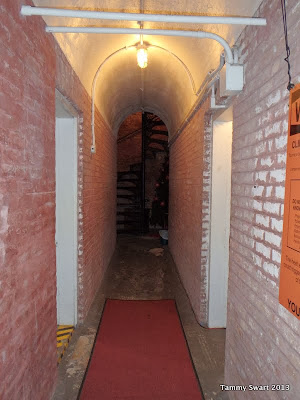 We entered the long hallway and I got a little creeped out.  Evidently there was an Episode of Ghost Hunters filmed here in Season 5.  It was a lot darker in there without the flash of the camera! 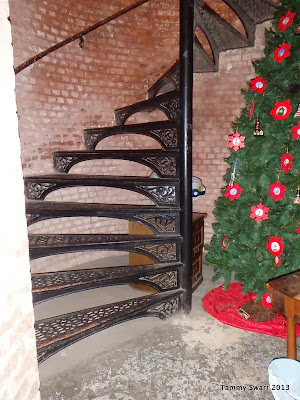 The festive Christmas tree did nothing to quell my claustrophobia tendencies nor my fear of heights as we mounted these OLD stairs... 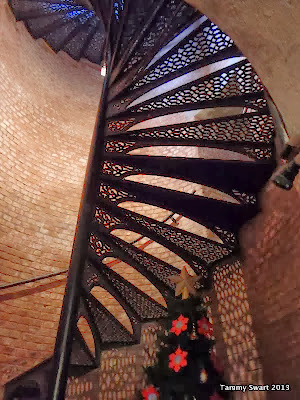 The place was well kept, but I could FEEL the age of these walls as we wound our way up, up, up.  I had to push back thoughts of how the walls could crumble... and how I hoped that there was no sway from the winds whipping outside... 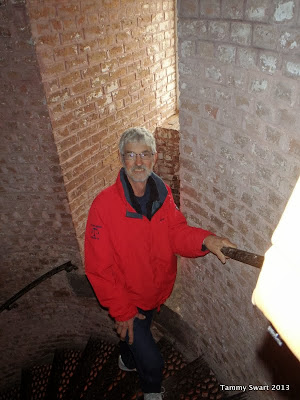 The metal stairs were beautifully wrought, but there were some missing, having been replaced by a wooden step...  Would today be the day that another metal step would give out?

Yeah, I know... I'm a Nut!  But thankfully there were windows where we could stop and take a break from the 177 step climb. 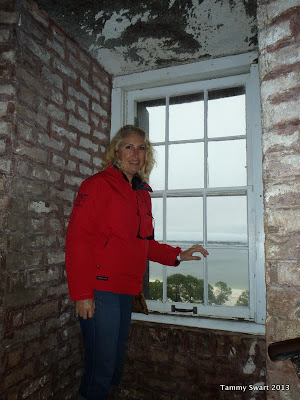 We were rewarded with an increasingly incredible view of the pass outside. 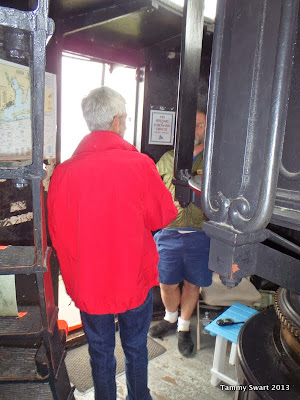 We finally made it to the last bit of stair, where we had to duck our heads and climb through the upper floor.  The winds sucked my hair up into the lightroom.

It was a tight fit as the huge mechanism holding the prisms slowly spun in circles.

We found the tour guide ready to answer any questions we might have. 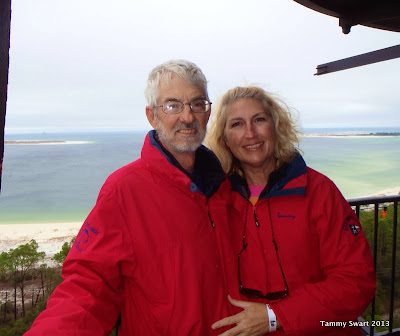 The view was spectacular, even if I was a little (OK a LOT) nervous about the heights!

We walked the entire circle, braving the fierce winds on the other side..., then we headed back down to allow the next group to enjoy this primo spot. 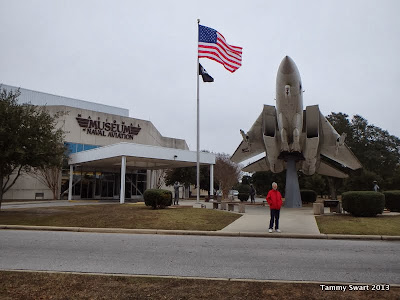 We walked back to the Naval Museum... I'm SURE it's colder now than it was. 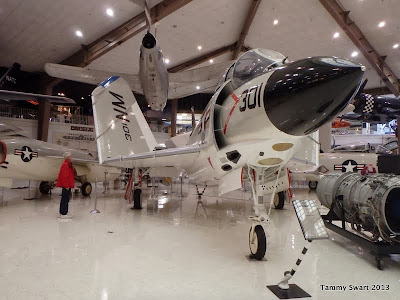 We had a nice warm lunch in their restaurant and strolled around looking at all the shiny planes. 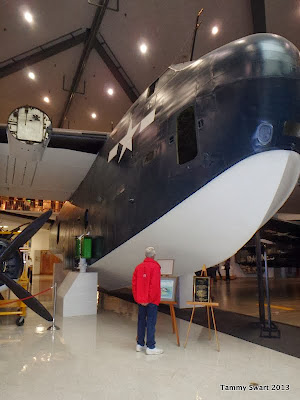 It was amazing that they could get all of these HUGE things into this space!  It kind of had a "New Car Showroom" feel... 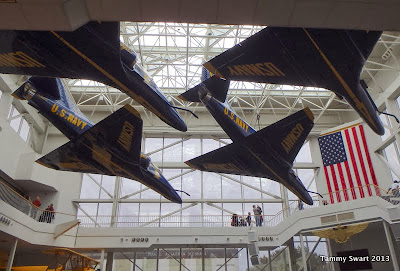 We bought tickets to an IMAX show, The Miracle of Flight.  It was awesome!  Parts of it made me feel a little queasy because it was so real.  Too bad no pics allowed!  We got to see how they trained the famous Blue Angels.  I'm amazed how they can teach the body not to black out from forces of gravity!  Just amazing... 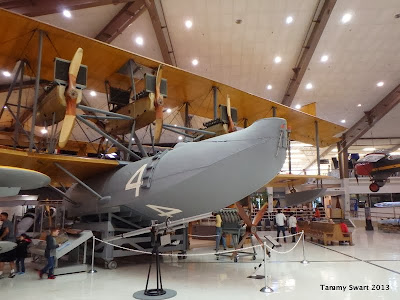 We continued on through the exhibit, watching a short film about the first Trans-Atlantic flight.  The plane used was on display... HOW could this thing fly? 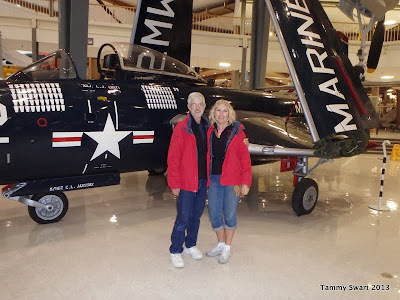 I found out something that I did not know about my husband...  He has a surprisingly extensive knowledge of airplanes.  He could name the plane by looking at it before we got to the information placard.  AWESOME. 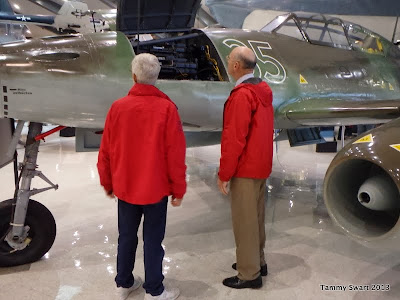 He even held his own in conversation with the Tour Guide and I was totally impressed! 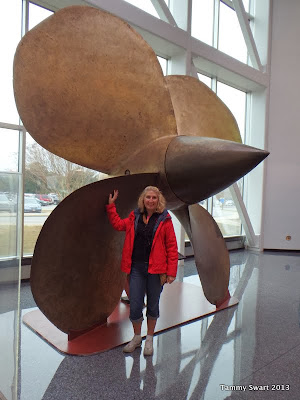 We finished up our stroll through this field of giants with a nice hot piece of apple pie and coffee at the bar.  We had a cold wait at the bus stop in our future and a walk back to the pier from the transfer station... That's all supposing that the bus remembers to come get us!

The bus DID pick us up... The new driver was even aware that we were here.  Public transportation took great care of us today!  We were touched that the new driver even delivered a little Christmas message from our previous bus driver, who got off work at 2pm...

We were all warm and fuzzy as we walked those blocks back to the Palafox Pier.  The rain held off but it was brrrrr cold as we made it thankfully back to our warm and cozy boat!

The day had been such fun and we never would have gone without the help from our Facebook Friends!  We'll get the hang of this "adventuring" thing yet, but it's nice to have a helping hand from other Cruisers who have gone before us!

Here are some more pictures from our day out!