The Longest Night EVER

We’ve had a pretty easy time of it so far, traveling in flat water in the ICW for 99% of our Cruise… This has made our preparations to depart every day very easy.  Practically just get up and GO!

But this passage is different.  Its our first offshore passage since we started cruising.  We can go no further in the ICW because of our 62 1/2 ft. mast height… we can’t get under all of the bridges between here and Tampa.

I won’t say that there are a lot of Cruisers coming from the Gulf Coast, but for the towns along the way that we’ll miss… I can’t help but think that they’re losing out because so many Cruisers won’t be stopping there along the way. Maybe the “Loopers” keep them in business...

We spent the day before departure prepping the boat.  We brought the dinghy up on deck and secured it.  We folded the davits and tied the outboard motor to the rail.  We moved the kayak to the aft rail and took one of the deck storage bags to the aft deck as well.  This left the foredeck clear except for the dinghy.  We moved everything to the v-berth that wasn’t tied down, including the bicycles. 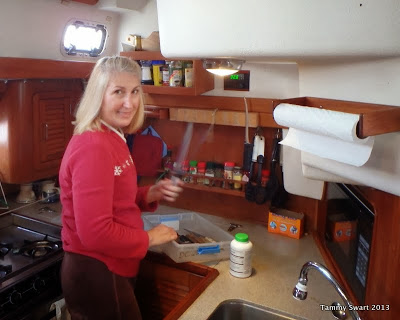 Inside the boat, we stuffed things into cabinets and tied things down.  We move the knives from their magnetic rack, we aren’t expecting any conditions that could make them come loose, but why take that chance?  We topped off the water tanks and I made some chicken salad and an easy oven meal of enchiladas for our dinner… we were set!

I asked Bruce if he was nervous, he replied "no".  I was nervous. We've been offshore before, but it's been quite some time, and never with the kitties aboard.  I think most of my nerves were just me torturing myself... so I snapped out of it and started to get excited about it.

We spent some time reviewing the charts and making notes about possible Plan A, Plan B, and Plan C...  We checked and re-checked our weather sources.  We sent out our Float Plan to our contacts...

Our morning was spent in leisurely fashion doing all of the little last minute things.  We anticipated our passage to be about 24 hours duration.  We wanted to approach our destination in daylight, so we couldn't leave very early or it would put us there before dawn.  We finally pulled out of the slip at almost 11 a.m. and headed for Pensacola Pass.  We motored out past the Pensacola Lighthouse, where we had visited during our stay.  Funny how I hadn't noticed it coming in.

The Pass is a beautiful spot with perfect white sand and blue water… with the good omen dolphin diving off our Port side… Yay!  I was getting worried that we would have no dolphin sendoff… 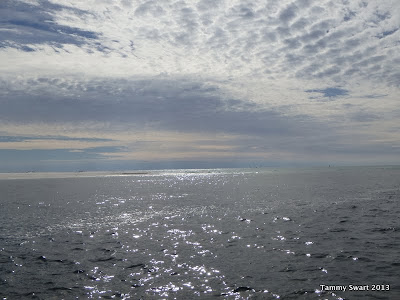 We had some swells broadside for the first part of our passage, turning into swells on the nose with light winds to match as we settled into our desired route. This made for a bit of a sleigh ride, but it wasn’t uncomfortable.

We raised sails to stabilize the boat even though the winds were light and Noserly, we could just carry it but we weren’t going more than 4.5 knots for a while.  Bruce wasn't really happy with our speed, but with the waves we were punching, it was the best we could do.

Before too long, the winds increased and clocked somewhat to allow us to sail more comfortably at 6.5 knots.  Unfortunately, they came back East and we rolled the jib and had to increase motor to keep up 5 knots.  Bruce seemed busy with the sails so I tried to get some sleep.  It would be a long night...

While I dozed, sometime in the night, the winds came back to the North and I was called upon to help roll out the jib again.  We carried that for a good while until the increased to about 19 knots.  We were doing over 7 knots which would get us to our inlet too soon.  We needed to slow down.  Bruce furled the jib and we continued on with main alone, still doing 5 to 6 knots.

We had a couple of brief light rain showers accompanied by a few gusts... I continued to get little bits of sleep in the cockpit, but Bruce really couldn’t go off-watch because he was constantly trimming sails and adjusting things.  I helped some, but until about 1 am, it was all him.


I took watch at that point and Bruce got a little sleep.  We continued under main only until we reached the entrance to St. Joseph Bay at dawn, then dropped sail and motored across the Bay and into St. Joe’s Marina.

Throughout our sail, the seas were not bad.  We had waves directions from front to Port quarter, but never anything big.

Some confused seas at one point were the big problem for the kitties.  There was some mess to clean up when we got in…  Poor babies.  Both had come up into the cockpit at different times through the night.  Jezabelle even snuggled under my blankie with me for a few hours.

There was one scare in the night.  Jezabelle left me and headed over to sit on Bruce's lap (I thought).  Suddenly he gasped "Jezzer's OUT".  She had crawled under the enclosure and was strolling nonchalantly around the outside perimeter.  I called her back to the opening and snatched her inside.  This was in the dark, full tilt sleigh ride, in the middle of the Gulf of Mexico!!!  Had she fallen or been washed overboard, she would be GONE!  I was horrified and didn't let her out again...  Lesson learned!

I was glad to get in.  Bruce had fun out there, but for me it was to be endured.  Never bad, just not my thing.  It would have been a whole different story if it hadn't been cold...

I took the helm and guided us into the St. Josephs Bay Inlet and across to the Marina.  We considered anchoring along the St. Josephs Peninsula, but the weather called for rain, so we opted for the warm electricity hookup of the marina...

I think we did things right this time.  We prepped the boat for worse conditions than we got and were never in danger.  Had it been warm, the passage would have been downright pleasant.  Had it been summer, we wouldn’t have had the thirteen hours of darkness making this the LONGEST NIGHT EVER!