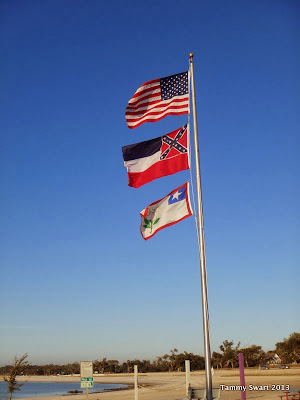 We slipped into Mississippi without notice after leaving the Rabbit Island Anchorage in Louisiana.  Our “Fog Day” was heavy on our minds and we looked forward to an easy and short passage.  We were one day out from another cold blast from the North and ducked into Pass Christian Harbor for a couple of nights to ride out the weather. 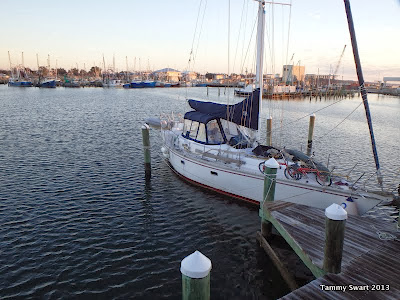 Pass Christian Harbor has a mix of pleasure craft and work vessels, but even so, it’s a pretty quiet place.  The slips are not the greatest, but Jennifer was very accommodating in trying to get us into the one that best suited us.  She was very sweet.

Our time here was pleasant, once I got over the horror of dropping my camera irretrievably to the bottom of the harbor…  We tried for hours to find it, but ended up riding our bikes 3.8 miles to the Walmart for a new one and some provisions.

We rode along the waterfront lined with old homes on one side and white sand beaches on the other.  The Sound was smooth and sparkling.  It was COLD!  But the ride did us good, both physically and mentally.

New camera in possession, we had a late lunch out at Shaggy’s Harbor Bar and Grill and scored the wi-fi Password!  Always a good thing! 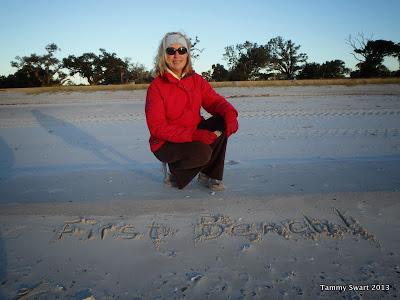 We took a walk on the beach the morning before we left.  It was our official “First Beach” as Cruisers!  Even if it was cold enough that I couldn’t feel my lips!  We’re TROPICAL now! 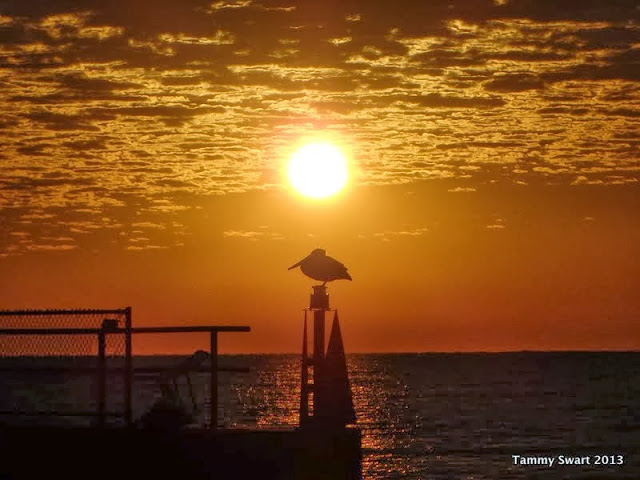 We are feeling our fears and reservations drop away as we gain confidence in our abilities.  With that, we decided to strike out on our own for the next couple of stops, the first of which was an anchorage we created where there was none.  Considering the weather forecast of North winds, and the fact that many of the known anchorages in the Mississippi Sound are for “prevailing winds” or settled weather… we had to improvise.

We could have gone to Biloxi and stayed in another marina, but in the spirit of our newfound independence… and our cheapness… we found a spot on the South side of Deer Island and made it our own. 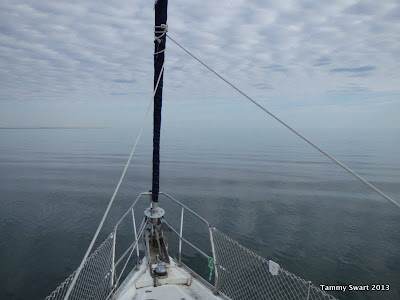 The trip from Pass Christian to our Deer Island anchorage was uneventful…  We hugged the Mississippi coast instead of staying in the ICW.  This way, the trip was shorter, we avoided the traffic and the North winds had little chance to hit us with their associated fetch.  We began our day with brisk winds (always on the nose) and ended it with none, creating a dramatic view with the sky and water blending into one… 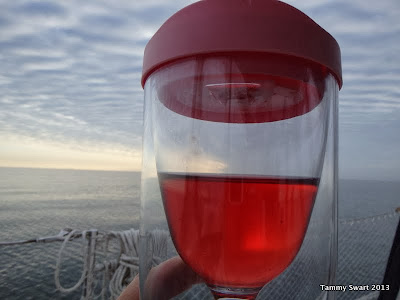 We ghosted into our anchorage and dropped the hook for the night.  Our evening consisted of high spirits and beautiful sights. 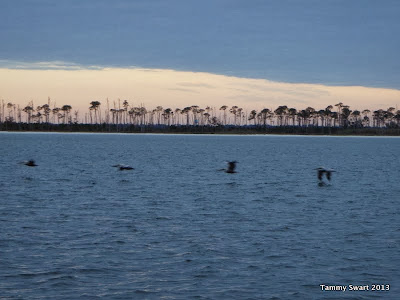 It was a good anchorage, but not a great one, being exposed as it is.  We had Deer Island on one side and the Mississippi Sound on the other.  But the forecast held and even with some East component to the North winds, the spot was relatively smooth.  We ended up staying two nights to avoid a passage through the Sound in rough conditions.

Our first night, consisted of slightly rolly conditions and the creak of our dinghy davits as they incessantly swung the tiniest bit from side to side… 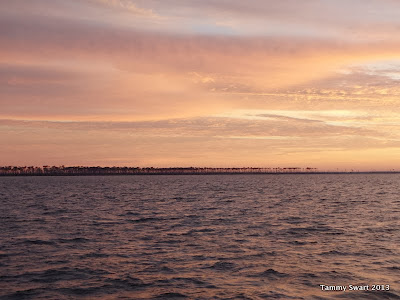 Morning found our mood restored with the beauty of the sunrise on the open Sound.  We had high hopes that the winds would moderate and the sunshine would allow us to dinghy ashore to walk that tasty looking strip of white sand on Deer Island.

Our moods began to sour somewhat as the day wore on and the wind and cold persisted.  We began to feel like we were wasting a day, but there was nothing to be done about it… we couldn’t really leave and get to another North-safe anchorage, we didn’t want to go to the marina…  So, I made us feel better with FOOD! 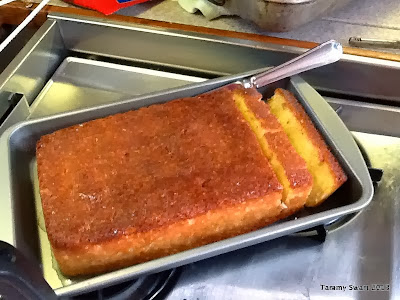 I baked a delicious lemon pound cake and we ate half of it for lunch.  After a nap, we became more resigned to our fate… that’s Cruising.  Some days are good, and others… well you just can’t control the weather, so we figured we would just get over it.  Sundowners improved our mood as well as the anticipation of our early morning departure. 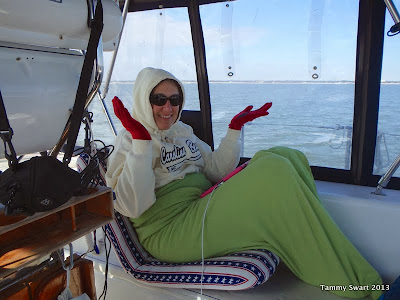 We awoke the next morning… well we were dragged from sleep at 2am by the dinghy noises...AGAIN!  No more sleep… it was going to be a long day!  Might as well get going so after attempting to squeeze a couple more hours of shut-eye… and that’s all it was… our eyes were shut… we got up and got underway.  We had the anchor up by 6:30 am, just after dawn.

It was a beautiful soft colored morning and the day was promising.  We expected wind on the nose for most of our day, but we started out with an hour or two of actual sailing.  The sea state was benign and we were happy once again.  Cold, but happy to be going somewhere new.  Our Deer Island anchorage had been good, but not great. Even so, we were glad we had done it and saved another hundred bucks!

Our respect for the Mississippi Sound had us a little bit apprehensive for what we would find this day.  But in the end, it was no worse than an average day on Corpus Christi Bay.  In fact, the conditions were so similar, that I felt a comfortable familiarity that I haven’t felt since we left home.  These waters were the color of CC Bay and the chop was the same.

We had adventures in navigation as we made our own way across the Sound, avoiding the ICW and the commercial traffic therein.  It was a challenge and kind of fun and gave us a feeling that we were being adventurous again.  It also helped to shave off a few miles from our day, which we would need judging from the slow progress we were making due to the crashing waves on our bow… We were making only a little over 4 knots for a large part of our day.

We gradually began to notice that the waves were decreasing and our speed was increasing as we neared Dauphin Island and Mobile Bay.  We checked the tides and found that we were just at high slack tide.  How could we have timed it better?  Well, we didn’t… we just got lucky again! 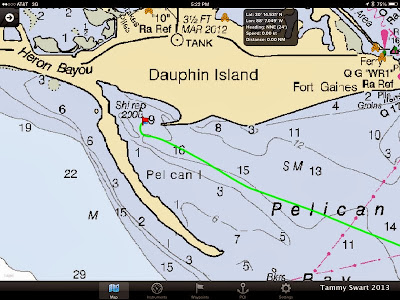 We made our final dash around the Eastern end of the island and out into the Mobile Ship Channel.  The Bay was almost flat and the winds we had seen earlier in the day had diminished, leaving us skating along at over 7knots toward our day’s end.  We made a near straight line avoiding the angles of the channel with good depth outside the markers.

We were just beginning to experience the “Big Water” offshore swells as we found our mark to turn into Pelican Bay.  We were surfing down the front sides of the following swells as we vacillated between the thrill of it, and worry that the cats would be creating messes for us to clean up… it was a kick, but we were relieved as the swells decreased with the depths and we found the entrance to our safe haven. 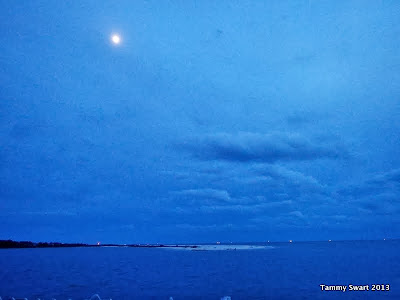 We motored slowly in, feeling our way and dropped the hook just after the tiny swells stopped.  We were inside the hook of sand that would protect us from any East winds remaining in our day, with the surrounding sandy slivers keeping all other winds from creating fetch for us.

What a beautiful place!  We have arrived in Alabama waters, leaving Mississippi behind.