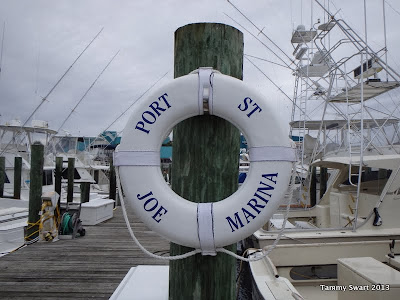 Once we left Pensacola and headed across the Gulf of Mexico, I held out little hope of anything more than just another long offshore passage to be endured to get there… A means to an end if you will.  But the wonderful spontenaity that is Cruising  once again saved the day.

The Reality:  We decided to go the additional few miles further and stop in St. Joseph’s Bay.  As we entered the Bay, our choices were to either anchor off the peninsula and go right back out for the hop to Clearwater, or go on in and stop at Port St. Joe’s Marina to wait for weather.  The weather gods were consulted… i.e. Passage Weather and Wind Guru and the decision was made.  Port St. Joe’s Marina it is! 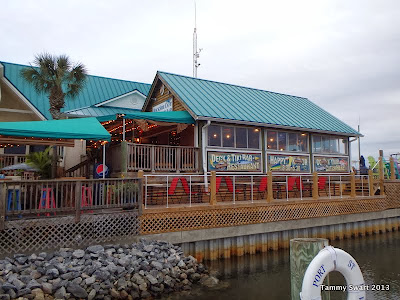 Now understand that prior to this moment, we had read nothing of this place.  We got out our cruising guides, consulted Active Captain and motored the five plus miles across this bigger-than-iI-thought-it-would-be Bay.  I did glance longingly at the anchorage with its promises of fabulous shelling as we motored past… Maybe we could anchor there on our way back out.

Port St. Joe’s Marina advertises itself to be the Friendliest Marina on the Gulf Coast.  That’s a pretty big statement after our time in Delcambre, LA., but we’re willing to give them a chance.  We motored through the breakwater and I couldn’t help but be less than impressed by their facility.  But, once we got settled and had a nap, we were revived and happy with our choice.

During our two night stay, John went more than the extra mile to make us feel welcome.  The marina provided a hose for washing down the boat, deck chairs at the doc, free bicycles to use for provisioning and even a newspaper tossed to our doorstep.

These things, along with the close proximity to grocery and other retail sources made this place the second most welcoming marina we’ve visited.

John had smiled knowingly when he said to let him know if we needed anything, and that lots of folks come for one night and stay for more… he was right!

We were looking for a weather window for that final hop to Clearwater.  When we started studying the charts, we realized that we could go inland in the ICW from here to Apalachicola, and with all of the Facebook friends we had telling us not to miss the oysters there, we decided “why not?”.  So, a new plan was born.

After a second night at Port St. Joe, we continued on by way of the Gulf County Canal. We turned into the ICW and found ourselves thinking we were back in Louisiana.  The waterway was lined with trees and we even got our first glimpse of a nesting pair of Bald eagles.

Amazingly beautiful beasts!  We had a totally stress free passage some 20 plus nautical miles to Apalachicola, making this a short day. 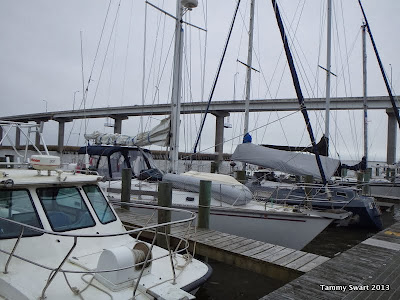 Our plan was to stay for one night there, but in looking at the weather and our options, we decided to wait here a second night instead of continuing on to Carabelle where we would have to pay for dockage. This gave us some time to explore the little town and have some of their World famous Oysters. 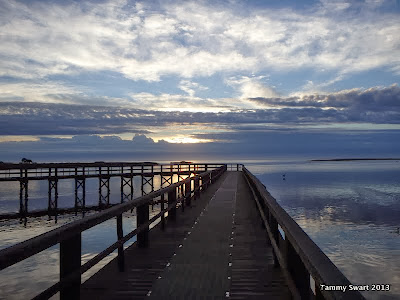 We started our morning with a walk along the dock and were treated to a stunning sunrise.  What a way to begin a new day!

We had some generator problems, but we had spare parts aboard.  We spent our fee morning with the boat torn apart replacing a shot impeller.  We finished about mid afternoon and took off on a walking tour of the town.

There is much evidence of the fact that Oysters are their livelihood.  We passed several processing plants with stacks of oyster bags outside.

The source of a particular smell was soon discovered… a huge pile of cast-away shells lie outside of one plant…  eewww! 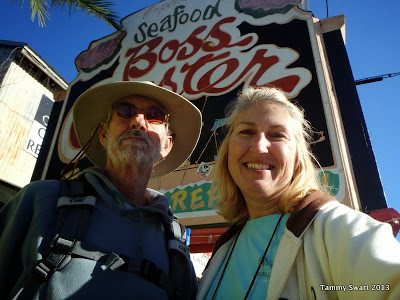 We picked Boss Oyster for our dinner, not only by virtue of the recommendations from Facebook friends, but by the long lineup of cars outside their doors!  This must be the place! 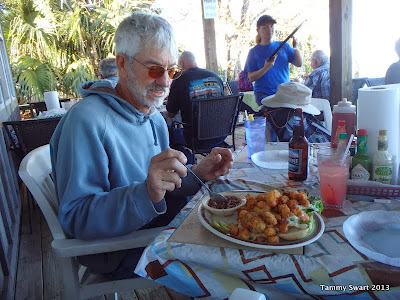 Bruce and I are really not oyster fans generally speaking.  But we just could not see leaving here without trying them after all the accolades we had heard about these being the BEST!  We chose a $17 sandwich off the menu to split and were not disappointed.  It was STUFFED with oysters, scallops, shrimp, olive salad and a lovely sauce. It was more than enough for us both, and we left the place feeling happy and stuffed!

We strolled hand in hand along the pier and enjoyed the sunset, although it wasn’t quite as good as the sunrise, we were having a good life! 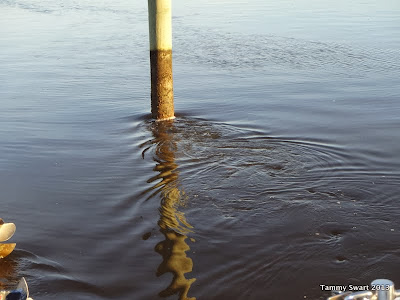 Overnight, we never noticed any lessening of the ripping side current beneath our boat.  It was running so fast that it made noise on the hull.  We had hoped that the tide would be low for our departure beneath the bridge, but we also needed for it to slack up a bit to allow us to get out of the slip.

I worried about it all night, and in the morning, I voiced my concerns to Bruce.  He too had been having some misgivings about leaving… We went out to assess the situation and while Bruce loosened the non-burdened lines, our neighbor came out of the boat next door.  He assumed that we were leaving as Bruce was disconnecting lines, and offered immediate assistance.  Well, not looking a gift horse i the mouth, we accepted!  I guess we’re GOING!

Our escape from that slip left me with knees shaking and hardly able to mentally process the events that started with the loosening of the bowline causing the boat to slam agains the far piling… to our frantically retrieving the trailing line from the water while in neutral, struggling to keep the nose into the current…

Somehow, we were able to get backed out and headed in the right direction, but I hardly remember how exactly…  It’s a blur. 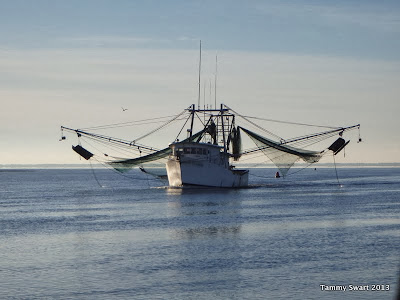 Suddenly, we were sluicing along under the bridge and out into the Bay.  The rest of our day was thankfully uneventful. 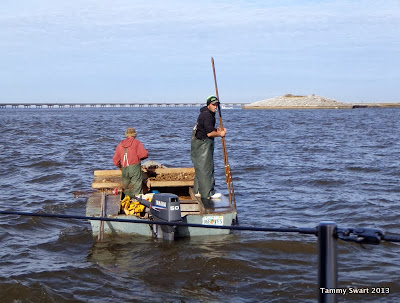 We passed another bridge and found dozens of small boats harvesting oysters the old fashioned way.  These guys work hard for their money scooping up the shells with these small basket/rake things.  I’ve gotta hand it to ‘em.

Our plan to stay at a marina in Carabelle was changed by our experience with the current at Apalachicola.  The river at Carabelle could very well be in the same condition and we had no intention of putting ourselves through that if we could avoid it.  We chose a quiet anchorage off Carabelle beach with good protection from North/NE wind and wave.  (29°49.703'N, 8441.050'W) 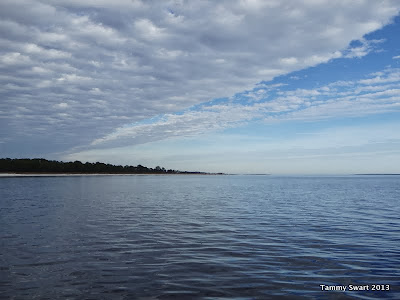 By the time we got there, the winds were a whisper and the waters were flat.  We spent our afternoon relaxing and preparing ourselves for the offshore passage to Clearwater and marveling at how much our plans can change in the blink of an eye.

The amazing thing about it all is how I continue to be amazed!  We were able to enjoy a couple more of the often missed cruising towns along the Florida West Coast and avoid several hours of slogging in the Gulf.  We experienced our first taste of tide/current action and had some wonderful meals.  We caught our first glimpse of the awesome Bald Eagle in the wild.  I wonder how many Cruisers bypass these places and miss these Mid Gulf Adventures...