A New Year And One Thousand Miles

I was in a good place about this.  Mentally, I had put aside my memory of our last offshore passage, and armed with a suitable weather forecast, I was ready.  I was positive and excited about getting this next offshore passage started.

We positioned ourselves within three miles of the East Pass out of St. Georges Sound.  (29° 49.703'N, 84° 41.050'W) We had spent a very peaceful night and woke up refreshed and ready to get under way.  We motored out through the Pass, thinking how lucky we were that our forecast was so favorable and hoping to make a speedy journey to our “destination goal”, our daughter’s house near Clearwater, Florida. 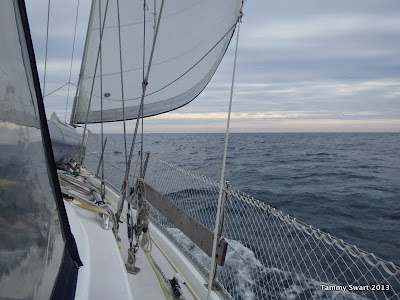 Our day on the Gulf was as pleasant as we could have hoped.  We switched off the engine as soon as we passed the last channel marker and Bruce, with little urging by me... set about making the boat go fast.  Ahhh it was so nice not having the engine rumbling beneath us.  Just us, and the sound of swishing waves.  So what if there wasn’t enough sunshine to make a warm spot above deck for Jetsam… At least it wasn’t COLD!

We lounged about in the cockpit, reading and eating occasionally.  It was NICE!

Bruce had rigged our small stays’l on deck before we left and had things pretty much ready for the night.  We began with  relatively flat water, but the waves built throughout the day with the winds.  But, wind and wave direction were in agreement so our ride was pretty comfortable.  Amazingly, even Jezabelle had escaped the clutches of Mal-de-Mer.  We were ecstatic!

The cat’s curled up on the settee below and seemed resigned to, if not happy about their plight.  They are beginning to know the drill…

We had dinner before darkness fell.  This I had learned from our previous overnighter.  Eat before it gets dark, or chances are, there would be no dinner!  Bruce made Frito Pies, which is probably not the BEST type of dinner to have when trying to avoid seasickness… but I was armed with my new secret weapon, about 20 squishy foam ear plugs.  (one in the non-dominant ear is supposed to stop seasickness even after it starts)

I had performed my usual pre-passage seasickness ritual of hydration, antihistamine and Emergen-C drink.  I was feeling pretty good, but didn’t want to push my luck by preparing a meal or spending too much time below.  Bruce isn’t usually seasick so the cooking falls to him while underway.  I’ll swear that it’s not just a ploy on my part to get out of galley duty!

So with dinner now out of the way and darkness beginning to invade, we began a bit more of an official/unofficial watch schedule.  Before I settled for my nap, we evaluated our situation and realized that we were literally flying.  We were doing 8 knots with 17 knots of wind, and after a short discussion, it was decided that it was (past) time to put a reef the main.

Bruce donned his safety harness and tether and climbed out of our warm dry cockpit, to go out and reef the main.  This involves me pulling the line from inside the cockpit, while Bruce secured it at the mast.  I kept a close eye on him and pushed back thoughts of what would happen should he slip and fall overboard.

Once back inside, we realized that our second reef line was jammed, so Bruce had to take the boathook and free the twist coming out of the back of the Boom.  We continued on that way into the night with the winds periodically dropping to 14 knots, then coming back up to 18.  We were trying to get as far as we could before the winds turned East on us.

I was on watch at about 10:30 pm when I woke Bruce because the boat seemed to be getting out of control.  We were now running at over 8 knots and the winds were in the low 20s.

He went forward and struggled against the winds and waves to set the second reef.  While he strained against his tether, somehow his inflatable harness was activated... Well, I guess we know that they still work!

Even with the main double reefed, we were still careening along with a full jib and needed to reduce sail to slow the boat down.  We rolled the jib in partway and the boat was still handling poorly, dropping our speed to less than 4 knots and rocking wildly from the waves...so we furled the jib completely and went to our stays'l, which had been prepared in advance, but Bruce still had to go forward to arrange the sheet lines and hoist the sail from the mast.

So, out he went again, the deck was heaving and crashing so he had to crouch low and creep along.  We had the deck light on, making the job easier, but it was still a wild ride up there.  After what seemed like FOREVER… Bruce was back in the cockpit while I trimmed the sail.  Finally our speed settled out to a more manageable 5 knots and we were feeling better about things.

About two hours later, the winds turned East and Bruce had to go out once again, to take down the jib.  We continued on until morning with mainsail and engine power.  The remainder of our night was plagued with confused seas causing us to roll wildly from side to side about every 4th or 5th wave.  The waves weren’t BIG… but in the dark, with our bodies getting the total workout from just trying to remain in one spot… they seemed to be HUGE!

I began to feel my earlier optimism shift and became admittedly crabby.  I had thoughts in my head that it would be a bad time to ask me if I liked Cruising right now… because the answer would be a resounding NO!  I kept consulting the chart plotter to get an ETA, and found that 15 hour estimate to be unacceptable and unendurable.  I griped about my watches… Oh I took watch, but I wasn’t happy about it.  Only my fear that Bruce would become fatigued and therefore less able to make decisions about sailing kept me from revolting and disappearing below to hide in our bed.

Time passed.  This is how we spent our New Year’s Eve.  Most years we aren’t even able to stay awake to celebrate.  This year, oh we were awake… but there wasn’t much celebrating. Even Bruce was feeling it.  These same conditions, in daylight and warm weather, would have been a non-event.  But this long winter night made our passage a most unpleasant way to celebrate the New Year.

We had passed our 1000 Mile Mark early in this passage.  That was something to celebrate.  A milestone.  Yay us.  But now, the old year passed miserably into the new one, with no fanfare, just a steadfast desire to get this night over with and somehow live to tell about it.

As it always does… dawn came.  We had made it and were only about 20 miles to our marker.  Instantly our outlook improved.  Even with dodging the famous Florida crab pots… we were getting happy again.  The weather was dreary with a heavy mist beginning to drop from our enclosure… but we didn’t care.  We were almost there!

I called ahead and arranged for a slip at the Clearwater Beach Municipal Marina.  Luck would have it, we would be right off the bow of our (soon-to-be) new friends, Renee and Dave aboard Alegria.  We now have a home for the next 30 days.  That’s 30 days where we wouldn’t have to think about sea states, or canal traffic, or tides and currents.  We would be free from passage planning and would concentrate on having some fun in the sun!

One more bridge to pass beneath, one ore tidal current to ride, one more shallow spot to run aground upon… wait, WHAT?  There was no mention of a shallow spot here!!!!  WTH?  Evidently, the recent North winds combined with a higher than normal tidal flow, caused a skinny spot previously unmentioned on Active Captain.  Well, I’ve remedied that!  We were only aground briefly, bounced once and slid off the sand, continuing (now more) cautiously on our way.  We found Dave and Renee waiting to help us handle our lines and, in a steady light rain, we ended our passage.

Our goal was made.  We had arrived to our home for the next month near our daughter.  We have begun a New Year that promises to be full of fun and adventure, stress and learning curves… We reflect upon our last year.  What a year of changes it has been.  We’ve come so far.  We left all that was familiar and started this wonderful and amazing journey.  We have so much to look back upon, but even more awaits!  What an amazing thing we have done to ourselves.  It’s awe-inspiring when you think about it.  We have made a BIG leap, and yet… taken day by day, it all seems so small.  I wonder what our next Thousand Miles will bring...