We May Never Know... 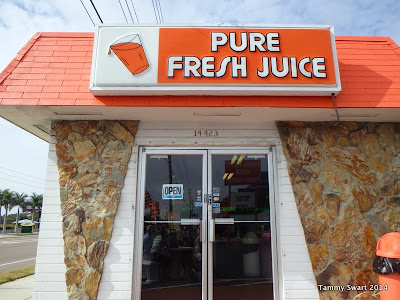 My younger daughter joined us for a long weekend here in Clearwater, and since the weather was a bit cool for beach going, we found alternate sources of entertainment here in Sunny Florida.  Oranges are nearly synonymous with Florida and I had yet to find a hookup.  Well, look no more, because there is this little hole-in-the-wall place, called Pure Fresh Juice near our daughter's home. 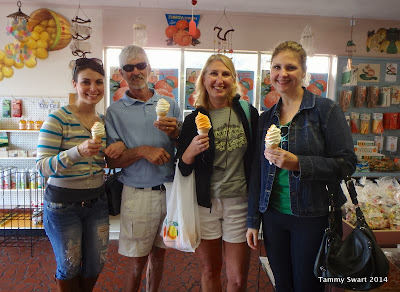 It opens up when they have fruits to sell and they also stock many other items.  The BEST thing they have, would be the orange ice cream!  YUM!  Go there and try the swirl... you'll thank me! 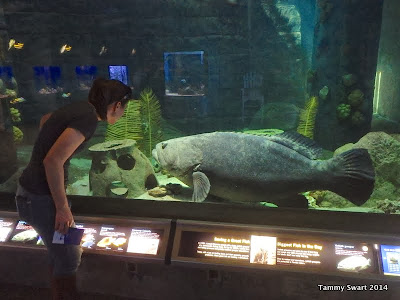 After having ice cream for lunch, we went over to the Florida Aquarium in Tampa, where we were all treated to admission by our youngest!  Woo Hoo!  Kids with JOBS!!


I have mixed feelings about these types of venues.  Animals taken from the wild and kept in captivity...

I don't want to start a discussion about it, but after leaving the venue, I had no sense that there was any type of mistreatment going on here.

Many of the residents are injured with little hope of living should they be returned to their natural habitat.  But the tanks here seem to be well kept and provide a lively existence of the beasts who live here.

We were able to be very near to some of the animals.  These birds were having a normal territorial squabble which was a treat to see.  The little duck was run out of his spot by the white bird, with much objection on the part of the duck.   He regrouped and came back for another round, causing the white bird to leave, after which, the duck flapped his wings in triumph. 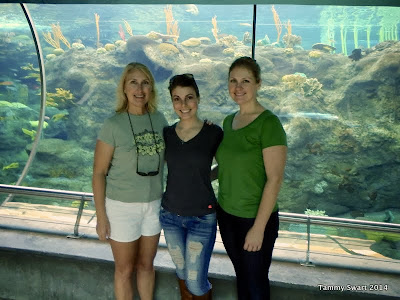 I was glad to see that there were no dolphin or whale exhibits.  They were conspicuously absent, and I hoped it was due to a more forward-thinking approach than I've seen previously.


Conspicuously present here... are creatures indigenous to the Florida waters.  This made this aquarium different from the others we've visited. 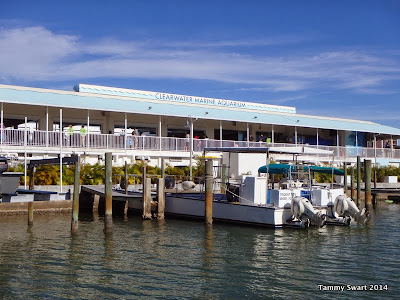 We only had half of the following day to fill as my daughter needed to head to the airport at about noon.  We stayed close to "home" and visited the Clearwater Marine Aquarium. 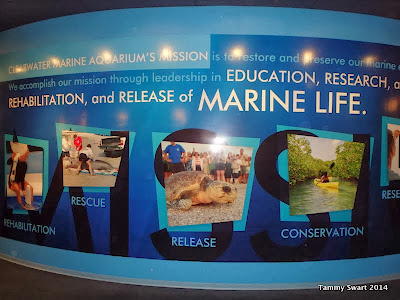 I'm not really sure that this facility is accurately named an "aquarium".  It is really more of a rehab facility for marine life.

We found the atmosphere very different from that of the Tampa Aquarium, or that of any OTHER aquarium type facility we've visited. There are no trained dolphin acts, no wales at all...

The tanks here are very plain, no fake sea bottoms here.  This is obviously a rehab facility with limited budget.  It seems that they spend all of their funds on the animals.

Many of the animals remain here only as long as it takes to rehabilitate them.  Some have been here for lengthy periods, and some will remain here forever, as they would be unable to survive should they be reintroduced to the wild.

Winter is one such "lifer".  She came here with her tail damaged from a crab pot.  She was eventually nursed back to life but lost her tail from her injuries.  She can't be returned to the wild or she will surely die.

There was no performance, we didn't even get to see her wearing her prosthetic tail.  But this is because they only put it on her for a number of hours per day so as not to stress her.

They replace the tail about every three months as her size and shape change, and as new technology is developed.

We were able to observe Winter as she interacted with another dolphin.  Her friend seemed to be trying to get her to play.  Winter seemed to be very subdued.  She would watch the other dolphin from the top and then take a deep breath and dive.


She is able to swim without the prosthetic, but her stroke has changed from the up and down motion of a normal dolphin, to the side to side tail motion, more like that of a shark.  Her veterinarian has said this has led to scoliosis, or curvature of the spine.  This is why her tail curves downward.

Winter receives physical therapy several times per day in an attempt to reverse the curvature, while getting her used to wearing the prosthetic tails.  They hope that her time in the prosthetic will increase and her stroke will return to a more normal one, causing her less pain and difficulty in the future.  I took several video clips of Winter swimming and made a short video. 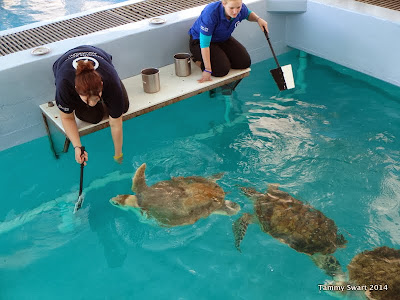 There were several turtles in residence while we visited as well.  We were there for a scheduled feeding and found the process fascinating.  The turtles have already figured out that when the trainers come around, it must be feeding time.  Each turtle can have different dietary needs.  To keep the turtles on the proper schedule, they are each trained to come to a particularly shaped panel at the end of a stick.  When the turtle comes to his panel, he is rewarded with the appropriate food.  It was pretty cool to watch. 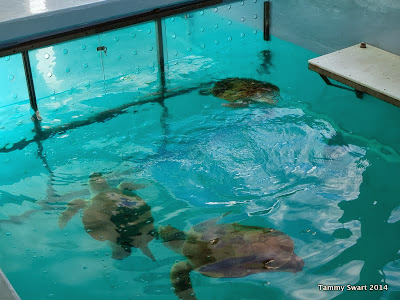 There were many turtles here but we only saw the four that were in better health.  There were three Kemp's Ridley turtles with injuries ranging from missing flippers to blindness. 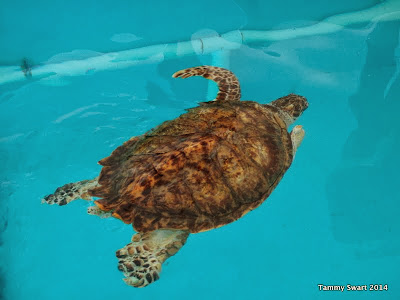 There was also one beautiful Hawksbill Turtle.  I can see why his shell would be of value for use as adornment...  This fine creature survived a shark attack and will spend the remainder of his life here.

We very much enjoyed our visit to the Clearwater Rehab.  We learned a lot and left with an increased awareness of the fragility of these creatures and how human carelessness can create havoc in their world. 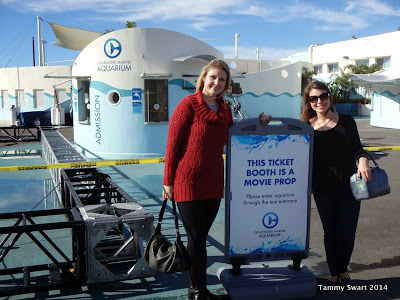 The facility is currently operating on a limited schedule due to the shooting of a new movie about Winter.  There were movie sets all around and some of the normal exhibits have been shut down.

Although I've never seen the movie (see how grownup my babies are?), it was kind of neat to see the movie props scattered here and there.


After saying goodbye to the girls, Bruce and I took the trolley to the second facility where we were able to become more familiar with the movie. 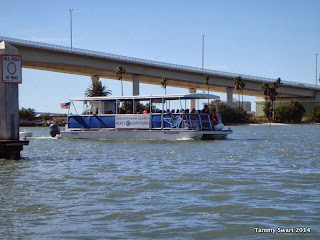 They have props and memorabilia set up for viewing, along with movie clips of each segment shown.  It was a fun day and it's got me trying to figure out how to get the movie over the internet...

Our ride back was via this water taxi.  All of this was included in the price of admission.  What a deal!?  You get an entire day of fun and can feel good about where your money goes.

I have been thinking about the life Winter leads.  I continue to mull it over in my mind and can't decide if it would have been better for them to have just left her to her fate, or if she would have chosen this life if given the choice.  I guess we will never know.