The weather was dreary.  It was raining when we arrived in Clearwater after a hard night on the Gulf of Mexico.  Bruce and I were in kind of a daze for the remainder of the day we arrived.  BUT.... by the next morning, we were relaxed and refreshed and looking for adventure!

I had been following the progress of our friends from Clearlake, Our Way Too, who had departed on December 21st headed this way on the fast track.  Their SPOT showed them arriving in Tarpon Springs a few hours after our arrival here in Clearwater!  We may have crossed paths out there on the water for all I know!  I was happy to know that they were safe and sound and within visiting range!

So, with the overcast skies and intermittent rain showers, we piled into our Son-In-Law's car and set off on a road trip to visit Dean and Catie, and to see what Tarpon Springs Sponge Docks had to offer!


The Community is largely populated by Greek Americans, and thus has the feel of "Little Greece".  Greek immigrants came here in the 1800's to work in the Sponge Harvesting Industry and stayed on long after the sponges were nearly wiped out by Red Tide in 1947.

The sponges sold now are mostly imports, although there has been some attempt to revive the industry, which may indicate a future comeback success.

The movie: Beneath The 12 Mile Reef was filmed here and tells about Sponge Diving back in the day. 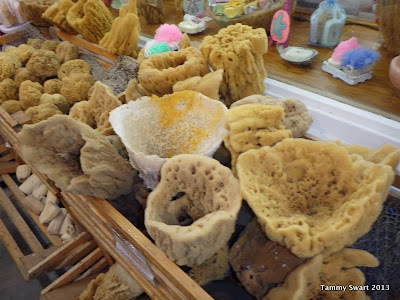 Although we didn't purchase any of the sponges... we enjoyed getting out and walking along the streets of town and seeing all of the varying shapes and sizes they offer.  I had no idea there were so many different types of sponges!

I probably could use a sponge or two on the boat but I'm really trying not to buy everything I see... It's a sickness! 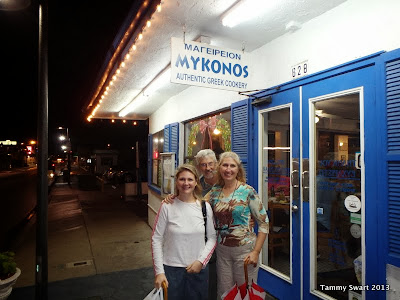 The Greek influence was tangible here as signs and conversations overheard were in Greek.  It was very cool.  We strolled along the wet sidewalks, weaving in and out of shops, soaking up the ambiance of All-Things-Greek...

We hadn't intended having dinner out, but when we were teased by the incredible aroma of Greek Cuisine... we could not resist!  We chose Mykonos as our dinner spot and words can not describe how delicious our dinner was.  To say that I was pleasantly surprised would be an understatement.  The prices were more than reasonable and the food was freshly prepared and every bite had a life of it's own.  Two Thumbs UP for Mykonos! 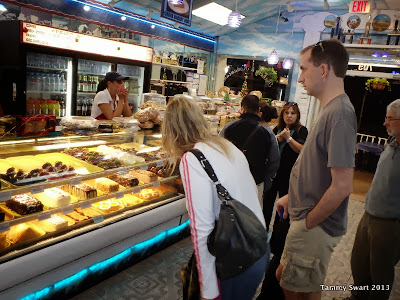 After dinner, the kids treated us to a decadent dessert from one of the local Greek bakeries.  My only complaint was that the choices were too many!  I wanted to try one of EVERYTHING!  We left Tarpon Springs with full happy tummies, and a desire to return on a sunny day so that we can take one of the many boat tours offered.  We surely left with unfinished business...