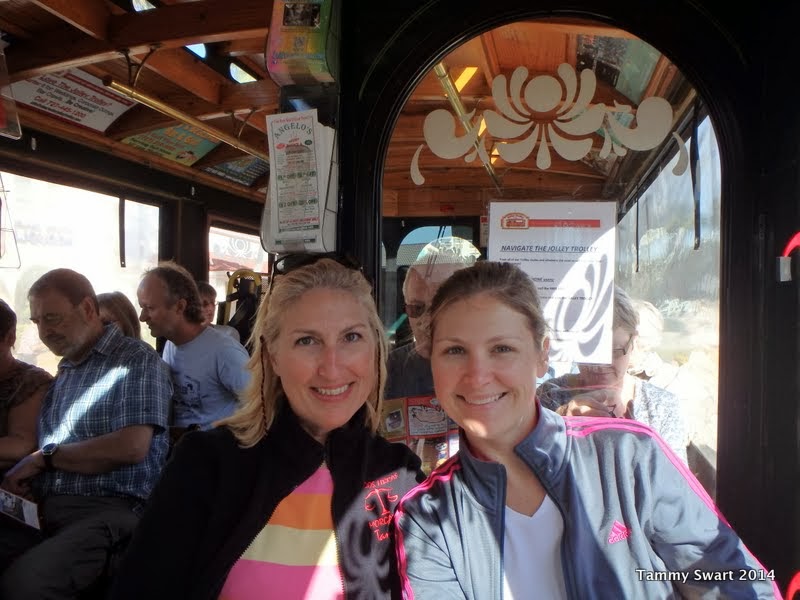 We're really getting GOOD at this public transportation stuff!  The Jolley Trolley here in Clearwater is super nice.  The Trolleys are clean and the drivers are VERY accommodating and helpful.  So... on Sunday, even though we had a car... we talked our daughter into taking the Trolley for an outing to some of the spots we missed on our Saturday Trolley excursion.

We boarded the trolley and whizzed through the streets along the coast to our first destination... The Suncoast Primate Sanctuary.

As a child, I used to DREAM of having a pet monkey.  I loved them, the way they would cling and be just like baby humans...  I WANTED ONE!

Certainly as an adult, I know that it would have been perfectly awful, but evidently some of that childhood longing still lingers, and I wanted to see the monkeys.  My daughter and husband humored me , although with dire warnings muttered about thrown poop...  We hopped off the bus at the sanctuary just in time to see the monkey food being wheeled inside.


The Sanctuary was originally founded in the '50's by a couple of traveling entertainers.  They retired with their performing animals, and later took in others.  They became a refuge for monkeys and other primates, birds and reptiles who were no longer wanted.  The animals came from private owners who could no longer handle them as pets, laboratories where they were used as test animals, and the film industry.  The Sanctuary eventually became a non-profit organization staffed by volunteers who keep the animals in health and hopefully in comfort, to live out their remaining years. 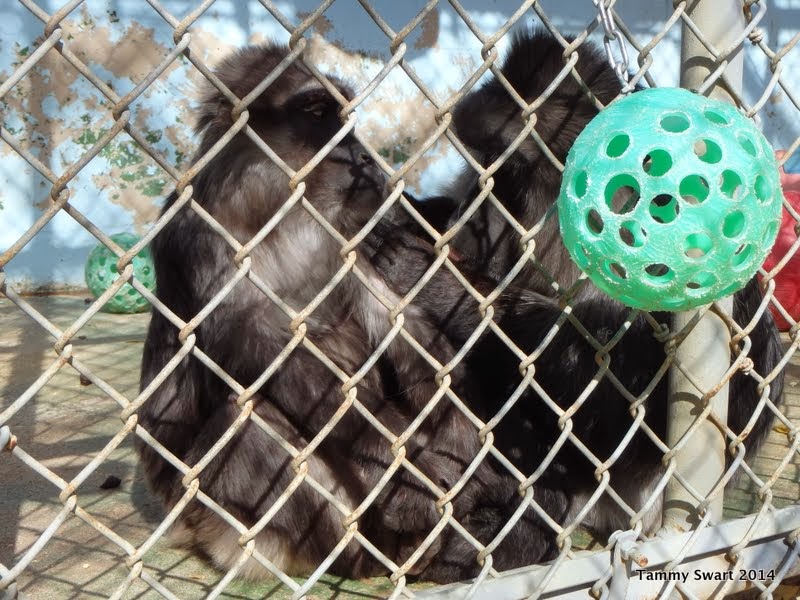 I had hoped to be able to touch one of the monkeys, but that wasn't possible.  We could walk through the pathway and view the animals in their cages but couldn't get close enough to touch them.

I stood very close watching the guy on the right picking through his partner's fur.  The look on the face of the pick-ee was priceless.  It was a long-suffering look as if this had been going on for hours...  Every few seconds, she would push the picker's hands away with a stern look... but he just kept going back at it.  I could almost hear her sigh in resignation.  I will say in his defense... that her fur and skin were VERY clean! 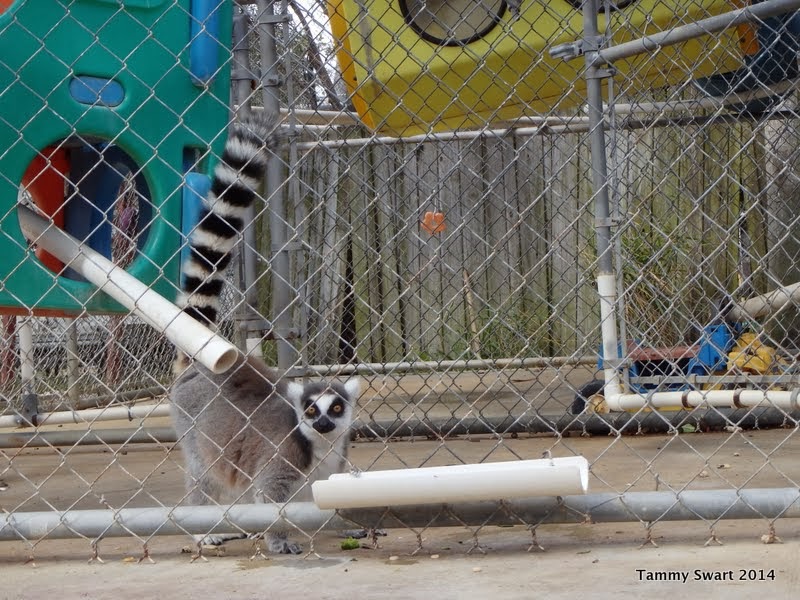 There were a number of more exotic animals along with some that were quite plain, such as goats and a turkey.  There were a number of birds and they all looked very healthy and fully feathered.  We've been to pet stores and other zoo type places where the birds had plucked out their own feathers.  I'm taking these fully feathered birds as a good sign.

I think of all the animals here, the Lemurs were my favorite! 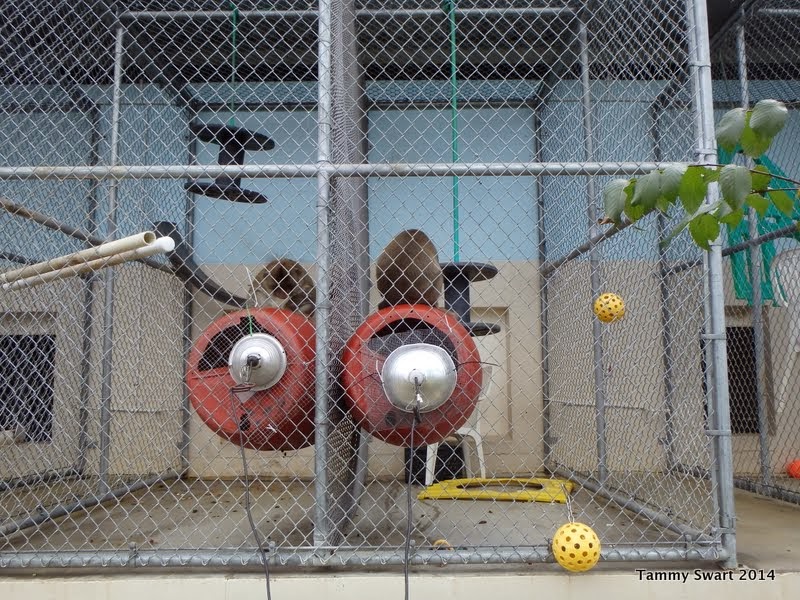 It was sad to see the long stretch of cages filled with former laboratory monkeys.  They seemed to be so sad and I wondered if they have memories of the lives they once led.  While it's nothing like being in the wild where they came from, it seems like the Sanctuary tries to give them a clean home, good food to eat and some toys to keep them healthy and entertained. 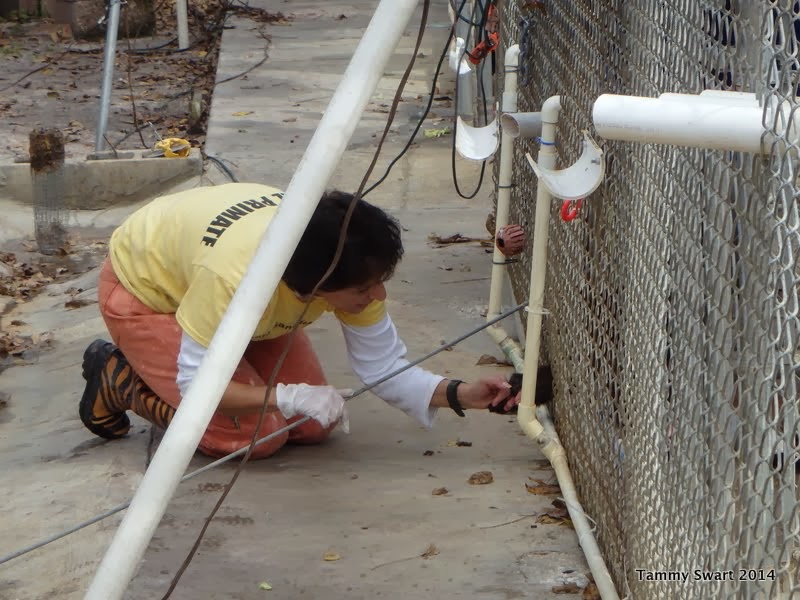 There were volunteers working throughout the facility.  Some were cleaning and others were feeding the animals.  We watched this woman as she attempted to remove the monkey's dirty blankets so that they could be laundered and returned.  I will say that the blankets she was taking out weren't all that dirty...  She used a long metal rod to bring the blankets to the edge where she could get them out beneath the fence.  One monkey seemed to have other ideas....  He kept taking the blanket back and coming to the  fence to reach out for the woman.  It was so CUTE!  I asked the woman if they ever went inside the cages.  She looked at me incredulously and replied "Only if I want them to take my FACE off!".  I guess that's a NO. 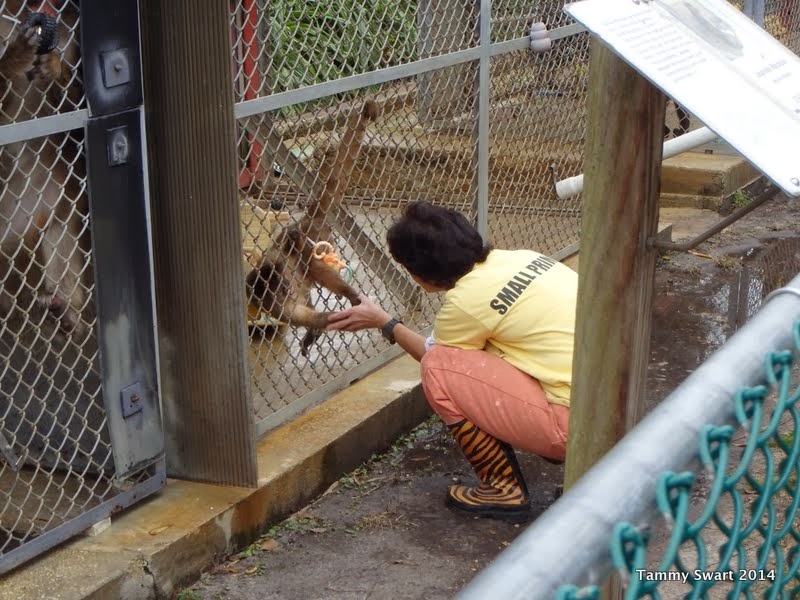 Here she is talking to another monkey who seemed to be of a much better temperament...  That other monkey kept throwing a piece of PVC around like he had some anger management issues.  this guy seemed to just want to snuggle. 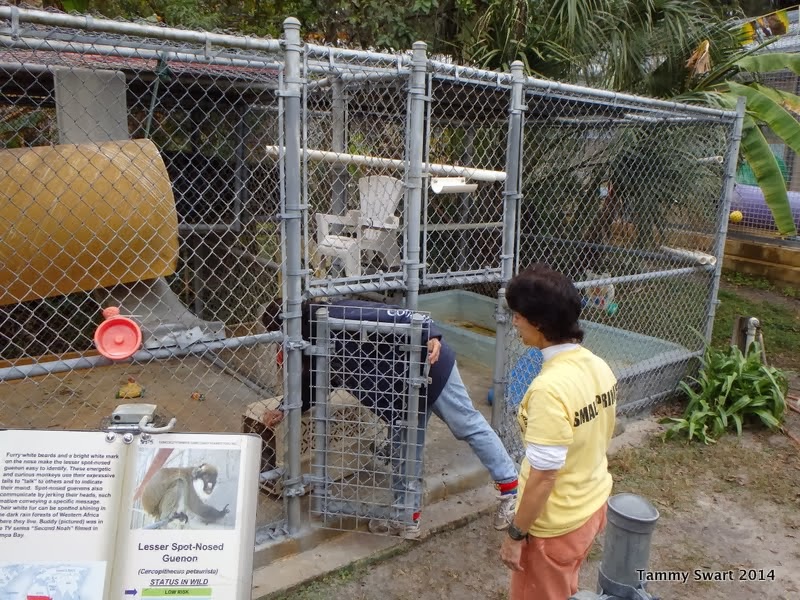 There are veterinarians and nurses on staff to ensure the health of the animals.  Here we saw them bringing in two of the elderly animals who are taken indoors in the evening due to age related upper respiratory issues.  The younger animals are kept warm at night with lights or by heated floors in their cages.  It was nice to see that the individual needs of the animals are being considered.

I was surprised and disappointed that they didn't handle the animals, just opened the cage and let them out without touching them.  I guess that's a good thing.

There were a LOT of animals here... We cruised along the pathway pausing to watch their comical behaviour. 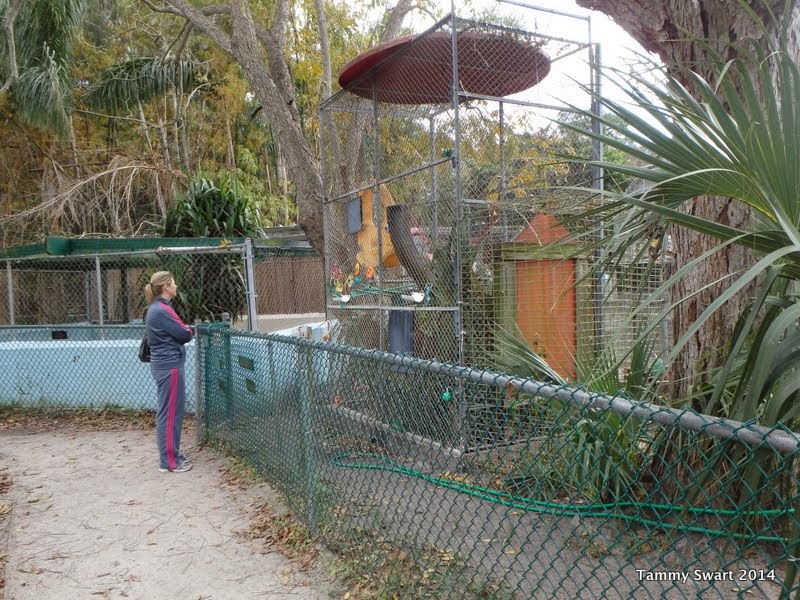 There was this one primate that produced an almost continuous wailing call during our entire visit.  He was a pretty thing, and fun to watch... His call was even very entertaining... for a while.  I wondered if the other animals got tired of his noise...


We finished up at the Sanctuary and, after a kind of lengthy wait, we hopped back aboard the Trolly for a ride to Dunedin for lunch.  Waiting for public transportation was not something we would have considered doing in our former life.  It's amazing how much we've slowed down... time just isn't as important as it once was to us.

We had a scrumptious dinner at Casa Tina.  This was the first Mexican food we've eaten since leaving home and it was absolutely delicious. 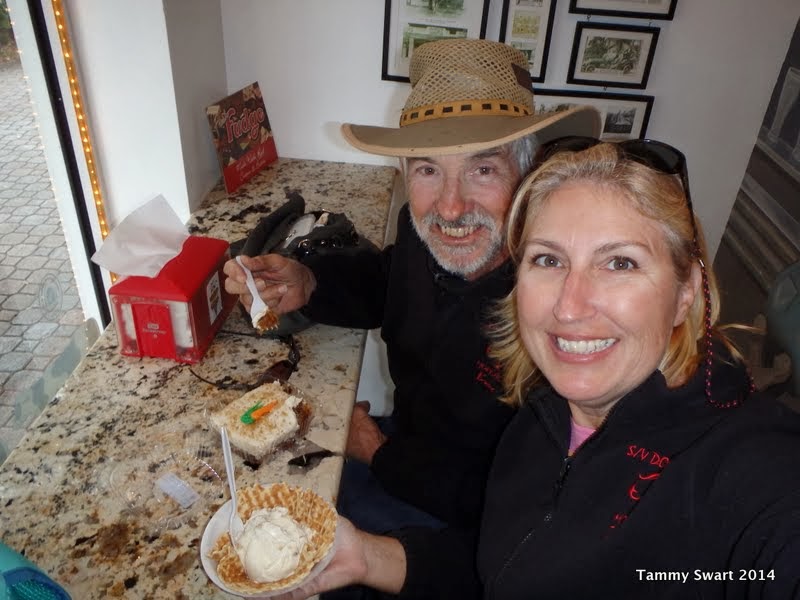 Unfortunately we missed the Trolley back to Clearwater and had to wait an additional 40 minutes until the next one... we were forced to have dessert at Strachan's Homemade Ice Cream Shop.  I'm usually torn between going with something that I know... or trying something new and different.  If I go with the usual, I could be missing something extraordinary... but then if I choose to be adventurous, I may not like my choice.  I chose to go with something I know and picked Cookie dough in a waffle bowl.  Imagine my joy when I tasted it to find that the familiar could still be extraordinary.  If you EVER find yourself in the small town of Dunedin... you MUST have the ice-cream!

The woman at the Primate Sanctuary told us that it was one of "Weird Florida's" Must-Do stops.  I would agree that visiting our distant cousins was definitely not on everyone's bucket list, but we had a great day... and I still want a monkey!