Sailing with the Family 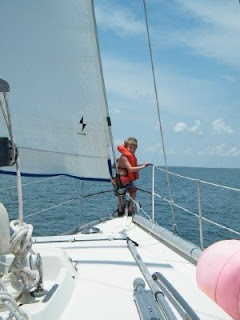 We've been trying for months to get Mark and Laura out on the boat with us. She has been making noises about learning to sail. Bruce is a willing and eager teacher but I think she wants to pay for lessons. We had Nathan along with us and he was much more interested in learning all about it. I had a great time giving him jobs to do and watching him puff up with importance while he worked along. He was so cute while we were under way. He quickly found the best seat in the house. 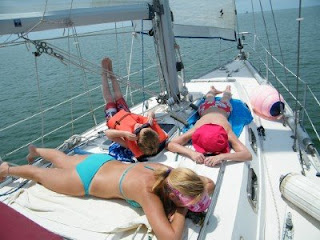 We girls were all about the sunbathing... as usual. Nate joined us once we found him some rather oversized sunglasses to wear.

We sailed up the Lydia Ann Channel for a bit. Bruce has been thinking of exploring the waterways alongside the channel and we've just never had the chance. Today, we did a little of that exploring. I told Nathan he had to come off of the bow since we had left the channel and the boat might stop rather abruptly. It wasn't long before we were a little bit aground. We were sailing along with Mark at the helm watching the dolphins roll and play all around the boat. Mark mentioned that the depth read 6 ft. About this time, we realized that the dolphins must be working a ridge and we had found it with our keel. It took us about 20 minutes but we finally plowed our way off leaving a wake of muddy bottom churned up behind us. I was a good wife and said nothing... until later. 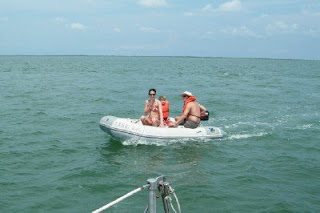 Mark and Laura took Nathan for a spin in the dinghy once we got back to safe water and set the anchor. Bruce and I had a bit of peace and quiet and enjoyed the beautiful afternoon. I was watching for them to come back and when I finally could make them out in the dinghy... it looked like Nate was driving. As they got closer, it was true! He did a pretty good job for a 5 year old. 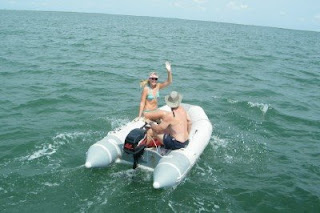 We traded places with them and Bruce and I took off in the dink. The water was flat and it was fun! We set out across the channel to see what was on the spoil banks on the other side. 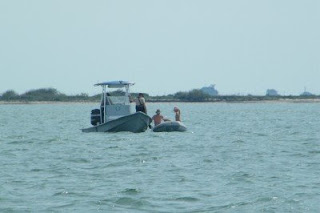 The fun police stopped us and checked our registration. I forgot to mention that we got stopped on Elan on our way out here today. This was 2 in one day!!! Man they must be needing money. Everything was in order so they let us off with a wave. 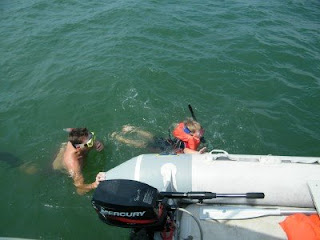 We didn't find anything interesting on the shore and it looked too shelly to pull the dink up on the bank, so we went back to the boat to join the others. Mark and Nate got in for a bit of snorkel practice. 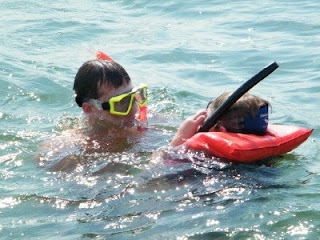 They're preparing Nate for the wedding trip... there will be lots of snorkelling in Hawaii! It was a bit chilly so I didn't get in. Well, that and the three rays we had seen cruising around earlier and all of the jelly fish floating around. 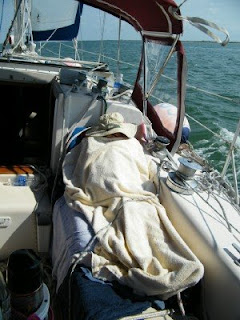 It was getting towards late afternoon when we pulled up the anchor with minimal whining on Nathan's part about wanting to keep snorkelling. It wasn't long before we were underway and he was out like a light under a beach towel and his Daddy's hat. We had a beautiful sail back to Port A and talked about the wedding. It's going to be fun! I had really enjoyed the day with Nathan on the boat. He's getting to be so grown up and was a pleasure. 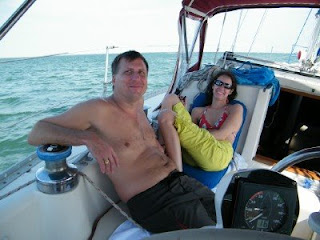 Mark took him out again for more snorkelling when we got back to the slip.

We broke out the boat drinks and were joined by our old friends Karl and Jan, along with our slip neighbors from Striker, John and Mindy. I'm trying to talk John into buying our boat so that we can get a bigger one and go cruising. Mindy is on my side. We had a good time chatting with them until sundown.

Once everyone left, we got the burgers on the grill. We were just finishing up dinner when Doug and Patty came back from an offshore fishing trip on their boat, Wave Dancer. I know they never have any food on board and must be starving so I went down and offered them the extra burgers we had made. They accepted and were down in a flash for a burger and a beer. We ended the night chatting with them until bedtime. We made a plan to take them sailing on Sunday.