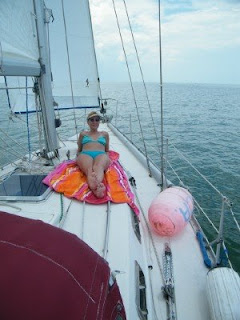 Finally!! Bruce's back seemed enough improved that we ventured out on Elan. I would have been distraught if we had to miss another big weekend event. The weather was great, light winds, partly cloudy. The stars were aligned. We loaded our stuff and set out towards Rockport on Saturday near noon. I was so happy to be lying out on the deck in the balmy breeze... enjoying the sunshine. 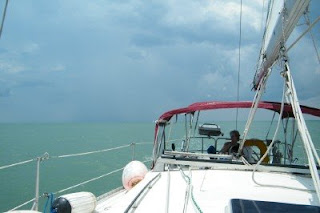 Then I noticed that the sunshine was no longer what it was. There were giant clouds building and signs of a deluge from back behind us and up ahead. OOOooh we could be in for it! Bruce wasn't ruffled, he just kept on motor sailing up the ICW towards our first stop at the Rockport municipal marina. BYC had nearly 20 boats signed up for this cruise. It's always a great group and this weekend was no exception. We love it when we get tossed together with different couples at each event and get to know new people.

We were helped to secure the boat at the dock, for which I was thankful. I had no idea how Bruce's back was going to do, but it turned out my fears were unfounded. He was doing pretty well. He did have to limit his standing around but there was plenty of partying aboard our neighboring trawler, Cabaret. The rain didn't really begin until we were all settled. Hey!!! It's getting into my Mai Tai!!! 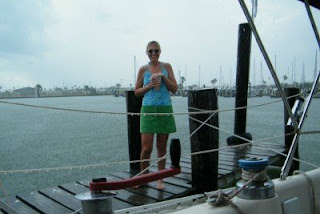 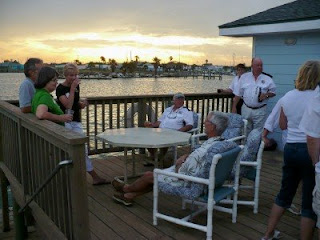 The evening festivities began with a happy hour at the Rockport Yacht Club. They were nice enough to extend the use of their facility to us for a couple of hours. We were delighted by the beautiful sunset and a rainbow even made a dramatic appearance. 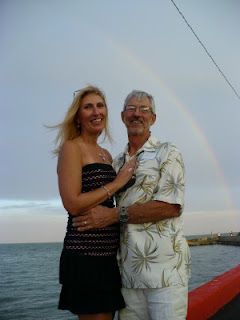 The pictures just never do it justice! Oh and yes, I was very much overdressed. I felt like a leper with my little dress on. Oh well, I hardly ever get to trot them out, so what the hell?! This is my first year in the club so what do I know? Maybe I'll start a fad. Oh what am I thinking? This is a "real" sailing club.

Anyway, the only thing disappointing about the evening was that there weren't more RYC members around. Bruce had really been looking forward to picking up a little "local knowledge" about the waters hereabouts. We are so close, with our slip in Port A, we have intentions of exploring up this way. It would have been great to get some pointers and advice. 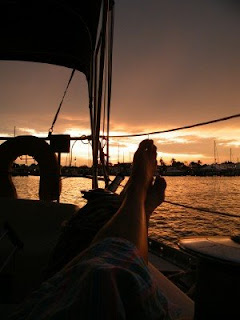 Many of the other couples drifted off to try the Wine Tasting event set up within walking distance of our docks. Bruce and I opted for a quiet sunset in the cockpit while we enjoyed the free music drifting over from the wine tent. It was a relatively early night (as usual) after a very pleasing day on the boat