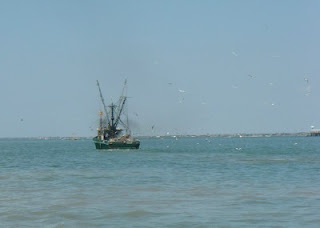 Sunday morning dawned calm and beautiful. We had our coffee with Baileys in the cockpit and relaxed. There was a short "skipper's meeting" aboard Cabaret. Harry suggested that we all return to the ICW the way we came into Rockport and then head back in towards Fulton between Markers 32 and 33. We would avoid the many submerged piles and shoals littered along the way inside of the ICW. Bruce and I followed this plan though many did not with no trouble. We had a great motor... no wind. We saw shrimp boats out in droves... followed by even greater numbers of gulls, pelicans and dolphin. 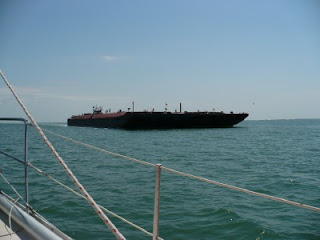 We had to share the waterway with the occasional barge, but this was nothing in the light winds and sunshine. 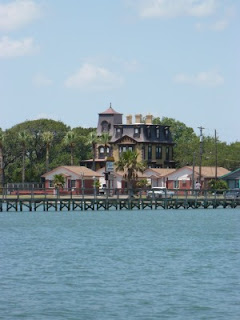 It wasn't long before we reached our turn and cautiously made our way towards the channel markers inshore that would lead us safely to our destination, Fulton Municipal. We had never been in here and it was as always, exciting to do something new. We came near the bulkhead leading to the marina and saw the famous Fulton Mansion http://www.rockport-fulton.org/frames/mansion.htm . 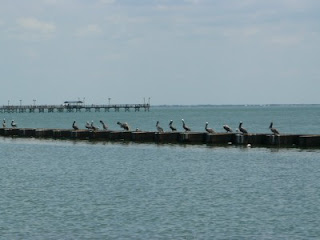 We came in through the narrow gap and found a welcoming committee of pelicans lined up preening. Hunting must be really good here. No doubt that following the shrimpers around they get their fill pretty early. 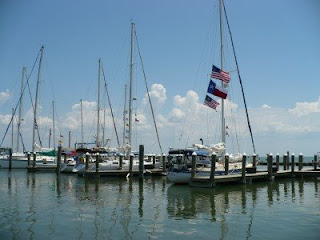 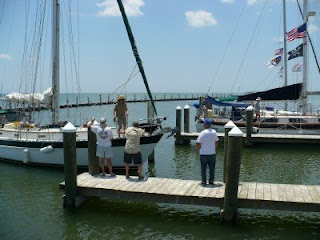 We coasted in and found our slip with the help of the others who had come in before us. It was a fine view of our fleet with flags flying in the calm waters of the marina. We joined them on the docks and compared notes on the trip over. We welcomed those in after us. It's such a great group!

It was beginning to get pretty warm by this time. We had a light lunch and took a nap in the cool comfort of our air conditioned cabin. We awoke in the mid afternoon and took drinks over to Bob & Kay's boat, Rima to hear stories of their offshore cruising adventures with their dog, Hamisch. I was spellbound and came away from it wanting to sell the house, buy a bigger boat and cut the docklines! 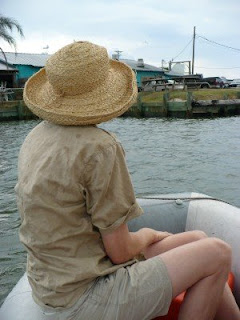 We almost missed the call for dinner. The club had a reservation for all of us at 4:00 at a place up the way called Moondogs. We opted for motoring instead of the land route since Bruce's back wasn't up to the walk. Bob and Kay joined us on the dinghy ride over. It began to rain on us as we climbed aboard... but who cares! We're cruisers! It let up by the time we arrived at our destination. 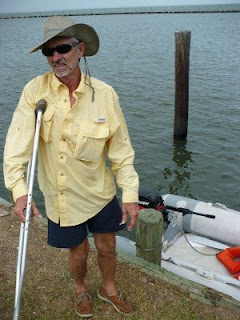 We scrambled ashore and met the rest of our group just in time to be seated on the patio. 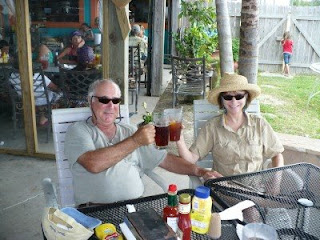 We could hardly hear our conversations across the table so it wasn't such a great dinner. The food was fine. I had a delicious grouper sandwich and Bruce ordered shrimp tacos. I had one of those and gave him half of my sandwich. I think I was cheated! 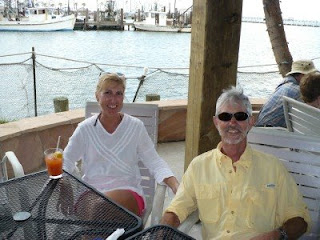 I made the mistake of pouring on the nice friendly looking sauce for the taco and my lips have yet to quit burning! There was a nice tasty Mai Tai to ease the pain, but it wasn't as good as the ones I had waiting for me back on the boat.

The group had plans to go to one of the member's homes for an ice cream social after dinner. Our table chose a quiet evening back on our respective boats. We dinghied back and were in for the night. Another great day! Before long, the thunder began again. 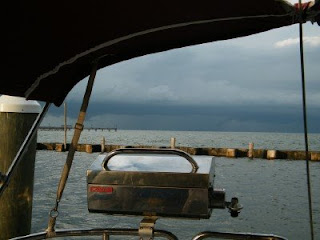 The sky blacked over and lightning crashed. I spent an hour trying to get a lightning shot with the camera to no avail. Suddenly, a whoosh of cold wind came blasting. Bruce said it was a downdraft. It fortold of rain! I spotted it coming just in time for us to throw the cushions and stuff back inside. The rain came down. That was it for our day. We snuggled up in the v-berth with our books.