First Time In A Long Time On A Wednesday 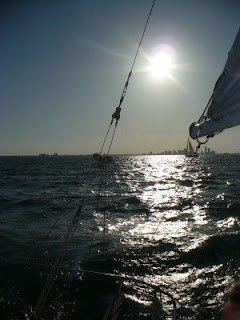 The winds finally let up long enough to get a sail in on a Wednesday night! I barely made it to the boat, in fact... I had to jump on off the bulkhead as Cute Shoes was already out of the slip. Steve made it easy on me though. Bruce was left behind at the committee box due to the sciatica (or whatever it is) that's been plaguing him for 6 weeks now. 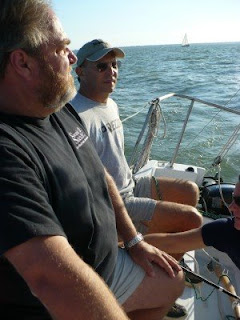 Steve and Jacquie had a new guy on board... Rick. I never did get a proper introduction so I'ld know where he came from. It seemed as if he was passing himself off as a newbie, but he did make several comments that lead me to believe that he has been sailing somewhere recently. I was glad to have an extra hand as I felt a bit useless. It's like I forgot most of what I know after so long away. 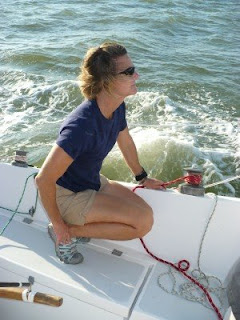 It was very nice to get out and blow out the cobwebs for a change. Jacquie's sailing skills are really coming along. You should have seen her... like a dervish! She was everywhere! She has learned a lot since we started a few short months ago on Cute Shoes.

I missed having Bruce out there with us. It's just not the same knowing he is back on shore wishing to be out with us. He did end up helping the race committee (of 1) with the start. After the race, we were even the only ones there when the very last boat came over the finish line. I don't know if their time even made it to the time sheet, but at least we were there to give the guy a finish. 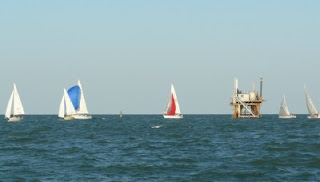