Dragging With Grace and Class 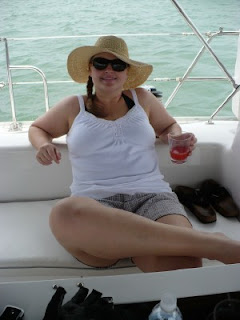 This year's Bahia Hee Hee was set to be a great one. Our deceased comrade Doug Tinker had left a bequest to pay for the meat and people were coming for miles around with side dishes and desserts to join the fray. We had every intention of bringing Elan. Bruce has been making some progress in his back recovery but on Friday morning we discussed and he made the call. What if we had a storm in the night and he couldn't do what it took to save us...? I called Brenda and asked her if her invitation to join them on Sea Flight for the weekend was still on the table. She agreed to take us on, Bruce, myself and Melissa for the whole thing.

We met up with them at 9am and made Sea Flight ready to go. The sail over to IOB was marvelous considering it was very cloudy and windy. The boat is just so great with the full enclosures and generator. Melissa did a great job on the way and seemed to enjoy it. See... hanging out with the old folks isn't so bad... we have more experience and more money! 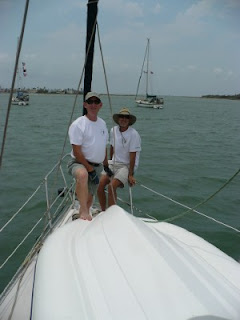 We got to the cove early in the day. The guys floated the dinghy and the chores were done. 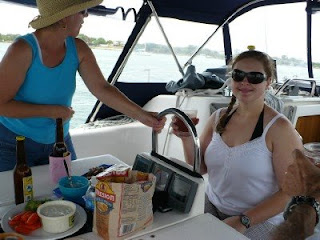 The women made some snacks and drinks and had a fine time laughing and talking. We formed a Mutual Admiration Society this weekend and all were in very positive form! It was a great sail over and a great day and we expected a great time at the Bahia Hee Hee! 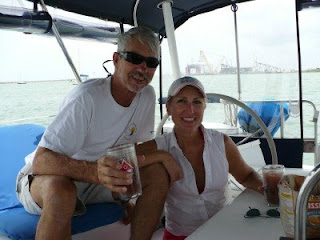 We spent the afternoon relaxing, reading, napping and sunbathing until time to make ready for the party. I had to put the finishing touches on the brandy cream sauce to go on top of the bread pudding that was my offering for the pot luck dinner ashore. We piled into Mark's new dinghy with the electric motor and set off for the party. The ride was slow as we were going upwind and were very much overloaded with 5 adults and gear. We finally made it to the marina and people there all waved us away. What!! The party was being moved to another place and boaters were being urged to go back to their boats as a cool front was due in within the hour with high winds expected. We never touched the shore, we turned right back around and went to the boat. 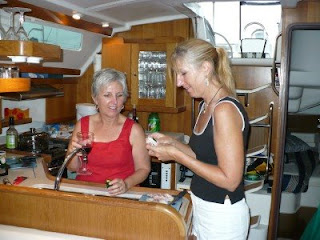 We made plans with several other boaters on the VHF radio to meet on board Sea Flight and have an impromptu party here. Brenda and I kicked into gear to begin making the boat ready for guests. 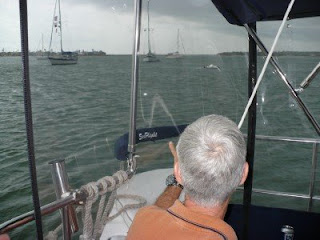 Before anyone could make it over, I looked to the North and asked... is that rain! And rain it was. A wave of wind hit, boats were swinging around on their anchors. 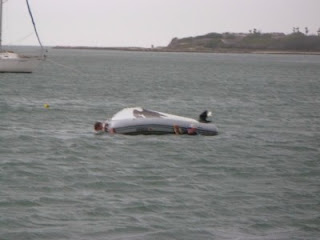 A couple of guys in a dinghy were flipped by the wind as they tried to make it across from one boat to another! Then all hell broke loose! Brenda screemed "Mark! Is the boat moving?!!" The answer was YES! We were dragging our anchor in the strong winds. The nose blew down and we headed back towards another of the many boats anchored there in the cove. 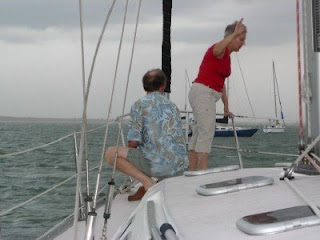 Bruce got behind the wheel, Mark and Brenda ran to the nose to try to work the anchor back to holding. Melissa sat just outside the cockpit enclosure to relay orders from front to helm. I watched other boats to make sure we didn't catch anyone's anchor line or get too close to kissing their boats. 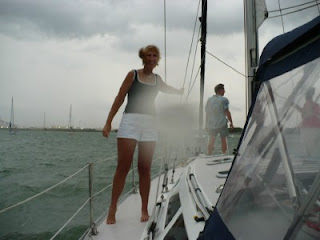 The wind howled and the cold rain came. The pictures do not do it justice. It was a WILD time! I went up a couple of times to see what the plan was. Finally we decided to bring the anchor aboard and get out into an open spot to put it down again. We had tried to reset it twice already before this decision was made. This involved us weaving in and out amongst the the other boats causing captains to come out on deck prepared to fend us off if need be. 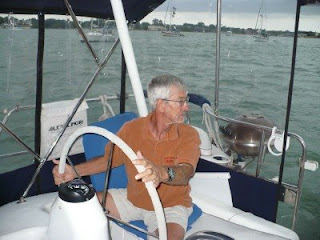 But the boat has fine power and Bruce was never in danger of hitting anyone... but they didn't know that! 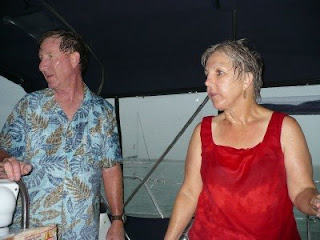 Finally we got the anchor to hold and the crew assembled inside the warm calm of the enclosed cockpit. We all looked like drowned rats 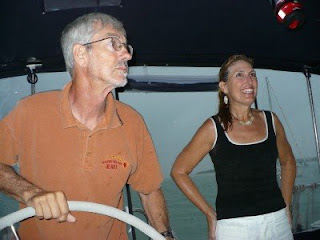 (except for Bruce... dry at the helm). We were all wild eyed with excitement and beginning to shiver.

We were all so excited it took a while for us to decompress. Mark had been pretty stressed by it all I think, but we had all worked well together and there was no fear. 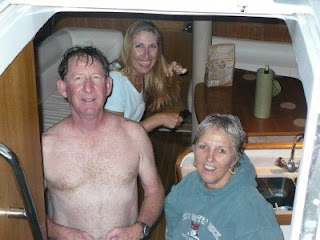 We went below and got dried off and into our jammies. It was decided that the impromptu party had been trumped by the bigger impromptu storm! We were officially in for the night. The sunset was a wet pitiful thing and we almost missed it. By this time, the winds had come down and the rain was a steady sprinkle. 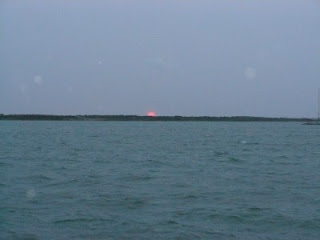 We threw together a dinner for ourselves and spent the evening reliving the moves and calls that had made for the successful outcome of the event. We decided that it was a good thing after all that we had invited ourselves to join the Hilers on this adventure! Things always happen for a reason.. I firmly believe this.
We had some trouble with the generator in the night and it stopped working at about 2am. This was not so bad as the rain had stopped by this time and hatches were opened to let in the cool dry breeze. We all woke up between 7 and 8 am and Mark and Brenda figured out a way to make coffee with no power. It was sooo good! 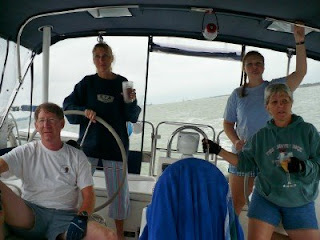 We decided to skip breakfast and head for home. In no time, the dinghy was dragged aboard and secured and we were on our way with several other boats. The mornings planned Mimosa party was put off to another day. Off we went with Bloody Marys in hand.
The sail home began well under reefed main and jib. We ended up further reefing both once we got outside of the sheltering influence of land and into the bay. Thank goodness for the enclosure. It was a very stable ride across if a bit sloshy. Melissa succumbed to a bit of seasickness but she shouldn't feel bad. We saw 30 kt winds and these conditions were none that we would normally sail in voluntarily. She was a trooper. Her downfall had been to go below to make another round of mimosas. Never again!!
We made a flawless landing in ligntning speed time and fellow boaters began to gather to tell tales. The Mimosa party lives! Everyone had some aspect of the shared event to tell. It's really the best part of any sailing event... the aftermath. Ahhh it had been a fun weekend. We migrated to the Surf Club for a group lunch with further story telling. Kay was the one who crowned us with the perfect description of our weave around the anchorage that has become the title of this entry... it's how we will remember it. Hopefully Mark's new nickname... the Drag Queen will be short lived.