The Little Project That Could

Since moving aboard, one of the lurking concerns in both our minds is whether or not the holding tank is full.  Our tanks are aluminum so there is no way to see if they are full or not so we've just kind of had to guestimate and have missed it a couple of times.  I found some relatively inexpensive monitors at Marine.com. (see final update at the end of this post)

Yay, right?  Well, you would think...  We've had them for a while, afraid to start the project that could get, lets just say... MESSY.  Finally we were out of excuses so I took a couple of extra days off work so that we would have plenty of time to dig in to this, and other projects that have been piling up on our list.  We opened the box and read all of the instructions like good little boys and girls.  The first step was to install the monitor panel.  We had planned to put it in the head.  When it came to reality, instead of running the wires from the tank, which lives near the stern underneath our bed, all the way to the bathroom... we decided to make things easy on ourselves and put it behind the bed, just a few feet from the tank.  We were feeling good when we finished that and moved on to the sensor installation.

This is where the wheels fell off...  The instructions were evidently written for people who already have a float monitor with a particular sized access hole.  Unscrew the old one and screw this one in.  Easy!  NOPE.  We were doing a new install from scratch.

After learning just about everything I ever wanted to know about 1" NPT threaded holes... (don't ask)... We decided we needed a plan B.  We went ahead and trimmed the sensor, which is a piece of PVC pipe with copper film lining two sides, connected to the offending NPT threaded gizmo and some tiny wires.


The next couple of days were filled with calls to a plumber friend, visits to the hardware store, visits to the garage to get parts, tools and pieces to mount this simple little stick.

We had highs and lows (mostly due to fatigue), but in the end, we exercised our problem solving skills and came up with a plan.  We needed to make a hole in the tank, insert this stick and secure it in some way so that it would not leak.  The aluminum tank was probably too thin to provide a very secure collar for the monitor so we came up with an idea.  We would make a plate to attach the gizmo, then screw the plate onto the tank...

We found a machine shop with a nice piece of scrap 3/16" aluminum plate.  The guy seemed thrilled when he asked us for $12 and we gave him a twenty.  We were just so happy to have found it nearby.   Luckily Bruce had the hole saw already and dock steps make a great sawhorse to cut the disks.

We ended up doing some steps the hard way...  For instance, we should have drilled the screw holes before we cut out the circles, because we had to use c-clamps to hold the disks still so that the holes could be drilled.  The second plate was much easier.

We still had to cut a hole in the middle of each disk so that we could insert the sensor stick.... so we used the c-clamps anyway.  There was just no easier way to do it.

I used a file to finish off the edges and file the screw holes flat so that they would seal.  We decided to use 5200 to keep the little gizmo attached to the aluminum plate.  I gooped some around the top of the PVC piece, then slipped the plate into position.  Then I put the butyl tape around the underside of the plate.  We had to find places to hang the pieces so that the 5200 could dry.  This is where time ran out.  I had to work the rest of the week and resume this project again on Saturday.

We were in good position and spirits when we got back at it late Saturday morning.  We had both been going over the plan on our minds and after a short pow wow, we got started.  It was time to drill the hole in the tank... GULP!  Bruce had  pumped and washed the tank earlier in the morning.  I was still very concerned that we would be inviting the most horrible stink into our bedroom...  It REEALLY wasn't that bad!  I guess our blue powder works!

I had to remove the butyl tape so that I could fit the piece onto the tank and mark the exact spot for each screw hole.  No worries, it went right back on.  Suddenly we had our parts all assembled and it looked like we were actually going to finish this project.

Bruce drilled the holes, I fitted the piece in, we screwed it all down until the butyl tape began to smoosh out the edges... All we had left to do was run the wires and we would be done!

We had all kinds of little connectors but ended up requiring one more trip to the hardware store for some extra electrical wiring.  We wanted to do this right and once!  It took us another hour or more to sort it all out...

But we suddenly found ourselves ready to slip the tiny panel into place and tighten four more screws... DONE!  Nothing left but to restore our bedroom to order (no small task) and oh yes... test the thing!

There was a moment of panic when Bruce flipped the switch and no lights came on.  (we had no idea what to expect here...).  I couldn't get the wall lamp that we had tapped into for 12v power to come on either!  Oh NOOOOO!!!  Bruce came over and gave the light bulb a couple of turns and it lit up!  Gasp!  Power!!!  I pushed the "read" button on the panel and it lit.  WE DID IT!  The little project that could was finally done!  No matter that we get to do it all again on the forward tank, which comes with it's own set of unique challenges... We can do it and another of the projects gets ticked off the list!  But for now... we will bask in the glow of success for the rest of the weekend.

We had some trouble getting the monitor to calibrate properly.  I finally got in touch with Dennis, the guy who makes the board behind the faceplate.  He was VERY nice and truly believes in his product.  He was not going to stop until we were happy.

Our problem seemed that we had intermittent power, but when all parts were tested, they showed to be fine.  This unit takes such a small amount of power, it turned that it needed wire to wire contact instead of contact through one of those shrink wrap connectors that seem (to us) more secure.  Once Bruce changed out all of those for twist-connectors, he got a steady power which enabled him to calibrate it.  We weren't too pleased with the taped wires however, but if this will make it work, we'll try it for a while.

Well, we thought it was working but it was still intermittent.  We have been so busy with other projects, we had little time to devote to this one.  The fact that we had to spend 1-2 weeks between testing (time to empty and refill the tank), caused this process to drag on and on.  Finally in mid-August, we re-established our contact with Dennis.  After a lengthy conversation, it was discovered that our tank is shallow, which caused us to cut the internal rod to about 8 inches in length.  Dennis told us that this type of sensor is not meant for use in tanks less than a foot or so in depth.  This was not mentioned on the website we purchased from.  (But it will be soon...)

Dennis was so very kind as to send us two new rods, pre-cut to our length with a special power amplifier installed and calibrated.  We installed the new rod and NOW... FINALLY... after all these months.... the tank monitor works just great!  I would highly recommend going directly to Dennis' website to purchase your tank monitor.  He will take the time to personally help you until the installation is done and working right. 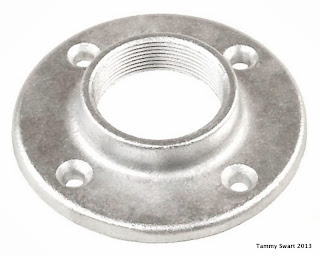 Oh, and this time, when installing the sensor rod, we used a different type of mounting hardware.  We were able to find this in our local Ace hardware store.

If we had known of this item in the beginning, it would have made this a MUCH shorter blog entry...