The Time Change and the Wednesday Night Race 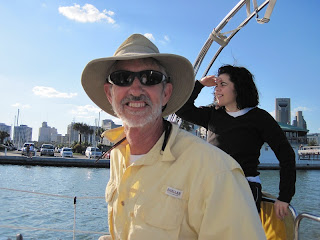 Hooray for Daylight Savings time! This was the first Wednesday night race after this year's time change. We're so glad that the sun is out for the whole race. 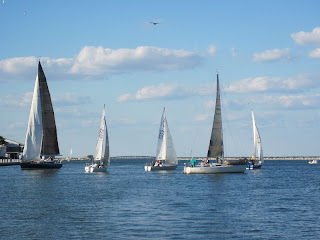 There was a pretty good turnout for the race today. Boats jockeyed for position at the start and the traffic got fierce! 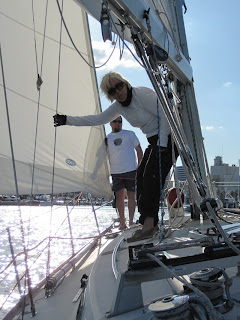 Mark and Brenda joined us. Brenda is off work for spring break and she and Mark are spending the week on their boat. They sailed back to CC from Port A just to grace us with their presence for today's race. Brenda joined Clay on the foredeck. Bruce has been coaching her and she's got it down. 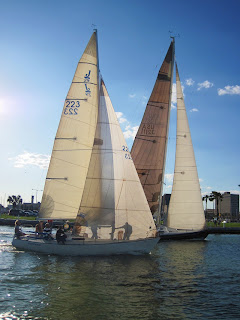 We were 4th start as we decided with all the crew... we would fly the spinnaker tonight! We milled around and tried to stay out of the way of the other boats at their starts. We had good position on our start. These boats were our competition. 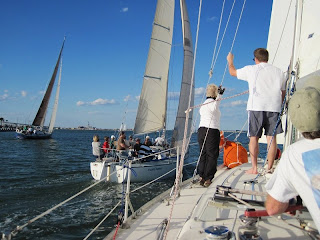 Before we made it to the gap, we were overtaken by several boats that hadn't had such good start position. Oh well... we'll get 'em later. We had to tack to the Gap, which is unusual for CC. It always makes thing exciting when the winds are blowing from the wrong direction. 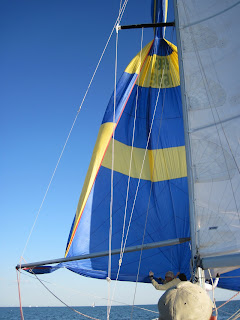 We all put our spinnakers up just after we left the Gap behind. Bruce had packed the spinnaker using these cheap little white yarn pieces... unfortunately they didn't want to give it up! The guys had to really yank it to get the yarn to break, freeing the sail to fill completely. 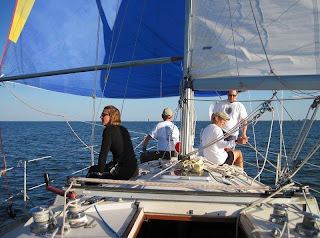 Once we got it set, Bruce called for all hands to head to the foredeck except for myself, at the helm, and Krystle, who was trimming the spinnaker sheet. 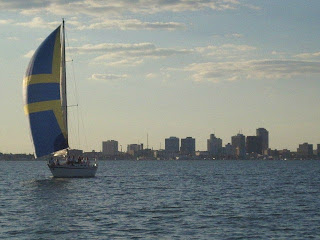 We began at the back of the pack, then slowly, we started to walk up on them. All boats but one had chosen to go up to our port... Doug chose to go low. Maybe Bruce would have followed suit had he been on the helm, but since it was me, I just headed towards the mark. 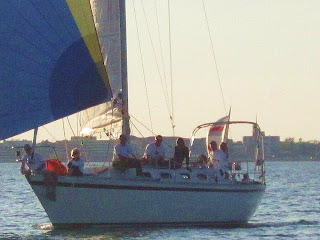 We got some good winds in the middle that died out again as we reached the mark. It was amazing. Bruce was incredulous as we made our way up through the field. The skipper from another boat began shouting good naturedly at us. as we took advantage of some force unseen and unfelt by the rest of the sailors. It was a spectacular feet! Bruce was thrilled. We were the second boat to reach the mark and rounded with plenty of space. 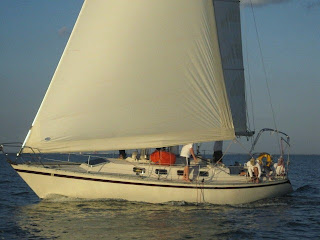 I stayed on the helm while everyone set the sails. Then Bruce came back to take his post for the weather leg. Unfortunately, we didn't do quite so well on this portion of the race. But it was OK, we had proven our worth to the pack! 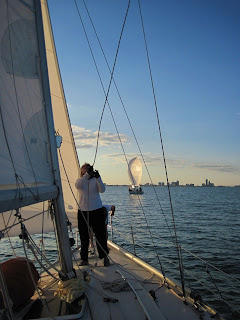 We had a beautiful sail back to the Gap, with the remaining daylight well appreciated by all. 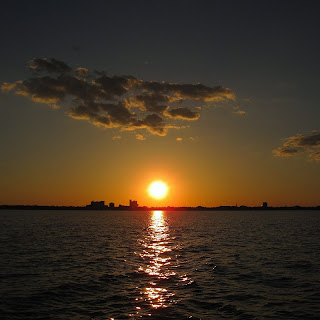 This week, the sunset was near the end of the race. Hooray! It sounds like such a simple thing to others... but to us, it's everything. It means that we can fly the spinnaker with a pickup crew. It means we aren't shivering. It means Spring is coming and life is good! 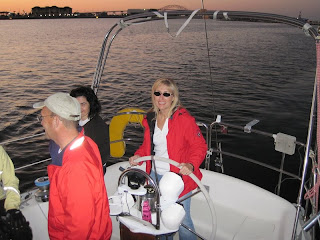 Bruce left me at the helm to set the sails so that we could go wing on wing inside the Gap. This is also unusual. I didn't mind. I enjoy being at the helm for the finish! 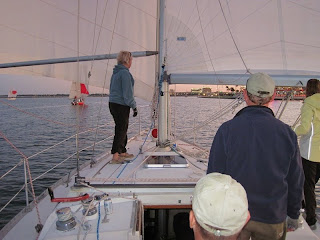 We cruised in over the line, but not before we had to do a jibe. Fluky winds! We discussed it for a bit, thinking it would take too long and cost us time in the long run. Steve convinced Bruce we could do it, and he was right. The crew popped it in and we were off! We picked up a bit of speed to cross the finish line. We had done well, and had a great time! Thanks to our friends for joining us. We are truly lucky!