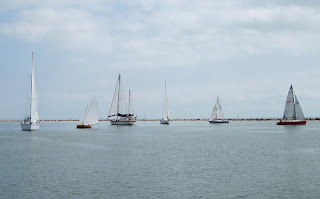 BYC is sponsoring a race series this year. Race #1 was held this Saturday and had 9 boats entered. The winds were very light and as we found out as the race progressed... very flukey! The start was staggered, meaning that the handicap was taken at the beginning of the race. Whoever gets to the finish first is the winner, with no calculations necessary. 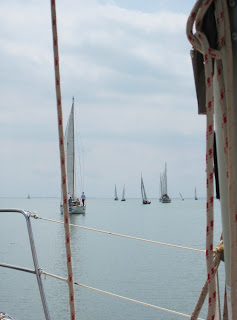 We were the last boat to start. This means that we were supposed to be the fastest on the field. It didn't much seem that way today! We followed the fleet all the way to the first mark. We just couldn't catch a breeze! 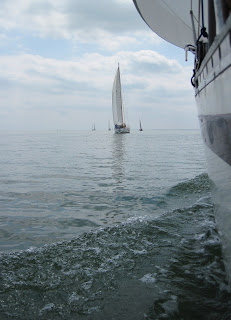 It seemed as if all of the other boats had the luck and found wind, where we were left in a windless hole all the way. You don't see this Bay as flat as this very often... 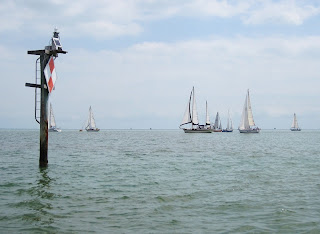 We finally made it to Marker #3 and joined the rest of the boats just trying to find air! It was most bizarre! There were boats all around going one way and another. You could see the puffs on the water but it seemed impossible to reach them. We made a bad decision to go right. We finally got some air and decided to use it to tack and go back across the field to the far left of the pack. It was our only chance as we were still dead last. 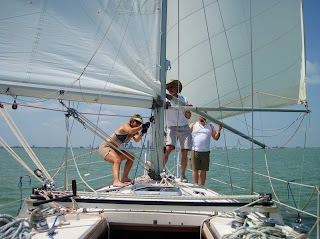 We struggled up the course and rounded Marker #5 at long last. We had made up some ground and were feeling better about things. There was a bit more wind out in the far reaches of the Bay. I took the helm while Bruce went to foredeck to set the pole for a wing on wing downwind stretch. There was a bit of difficulty with the telescoping pole and Clay had to go forward to help. 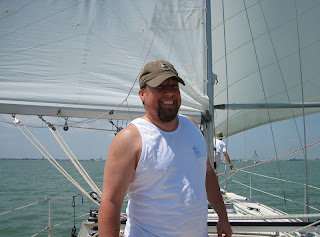 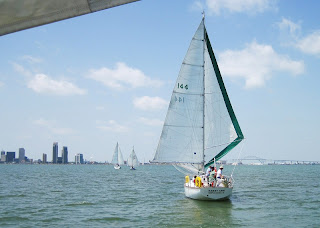 Suddenly, we were gaining ground on the boats still ahead. The crew relaxed as we made our way past one boat after another. 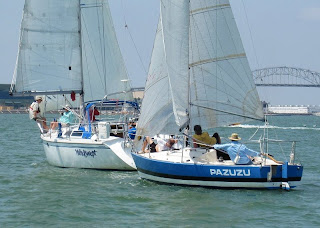 We sneaked up on these two battling it out for third. We slipped right around Pazuzu and it wasn't until we were alongside that they even noticed we were there. They had been so intent upon catching Windswept. 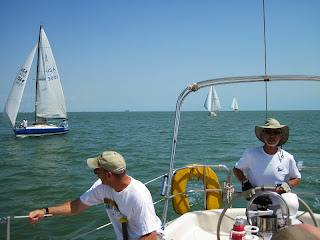 After spending the entire first half of the race in last place, it was nice to have some wind and be able to get moving. Bruce was calming down. 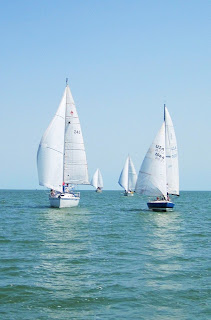 We were able to enjoy the warm sunshine and the beautiful Bay with only a bit of the rabid race urges still pulling at our Captain. There were two boats ahead that we were not going to catch. The best we could hope for at this point was a "third". 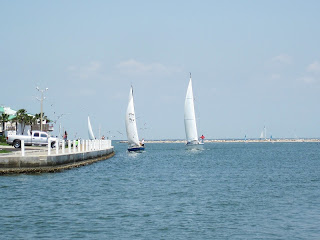 But it was not to be... we ended in solid 4th place. Nothing to be em- barrassed about though, we gave it a good shot and the winds were just not with us today. 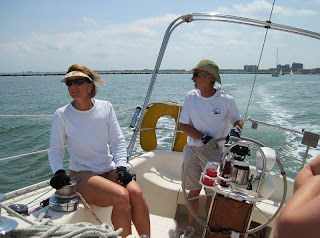 We made a couple of "Victory Laps" around the marina and headed for the barn. We have a great crew and the days are getting warmer and longer. A few practice sessions and we'll be ready for the race season. Thanks to all who raced with us and against us this fine day!