Best Race of the Year... so far 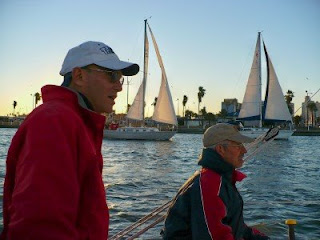 The WNR this week was very exciting! We had five boats in our start where in recent weeks there have been times that we were the only boat in our start. We had purpose! Steve and Bruce were lit up! It's fun for me to listen to their strategizing and plotting. It's also fun when we start out relatively even with the other boats and then gradually begin to pull ahead. This is what happened this week. 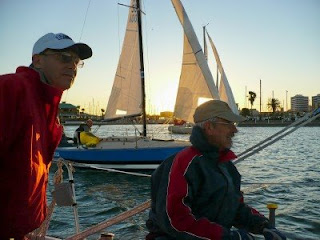 Cute Shoes is really a great little racer. We were ahead of most of our competition by the time we were out of the "gap" in the breakwater enclosing our marina area. We were in good position above the other boats and planned to stay there. 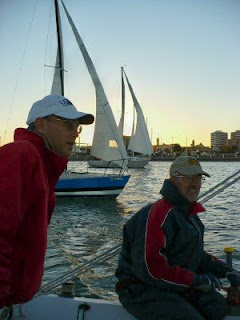 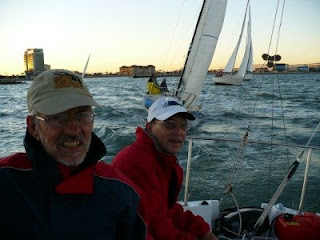 Once we were in the bay, we were going upwind on a starboard tack. We had two other boats to contend with. They were right behind us and to starboard. We had to climb up above them leaving them further behind and more to port in order to be able to tack. Steve did a great job of "eaking" up without pinching too much. We were able to gain the position we needed well before tacking was necessary.

I'm optomistic that winter will end soon. We've had nothing but mild days for the WNR's... oh we've had to bundle up, but not so much as to make it un-fun. The daylight is gradually staying longer into the race too, making it so much better. It's nice to be able to look out over the course and see where the other boats are instead of just knowing that they're out there somewhere in the murk.

We rounded mark #3 with only the larger boats on the course ahead of us. (Larger means faster) We had a very nice ride back to the barn surfing the waves and chatting. There's not much room for chatting on the upwind legs. Steve's much more PC than Captain Bligh, but it's still obvious that he takes this racing seriously and wants to win.

We had another exciting segment after we came back into the gap. We had three boats to beat and we pulled ahead. It was a great finish and we're thinking we did well to be on our way to a trophy this year!