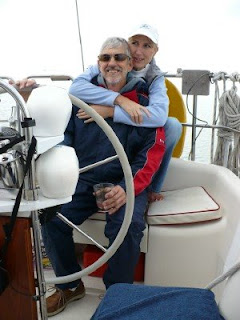 Bruce and I invited my brother Mark and his fiance, Laura to sail with us from Port Aransas to Corpus Christi Marina. We had put off the decision on going until Saturday morning waiting on the weather reports to agree with one another. Finally, we got a clear report that, although not stellar... was acceptable. We were to expect high 60's and light winds with overcast skies. We met at the CC Marina to leave cars. We drove out to Port A and got on our way. 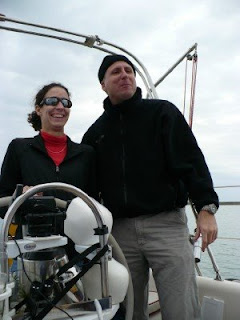 We are really hoping that Laura takes to sailing. I know Mark enjoys it and it would be great if she got interested. I'ld like to see Mark and Laura with a boat of their own some day. Anyway, it was a nice relaxing ride over. Laura took the wheel for a while. She's a natural! 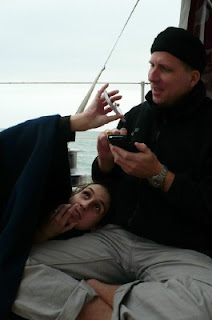 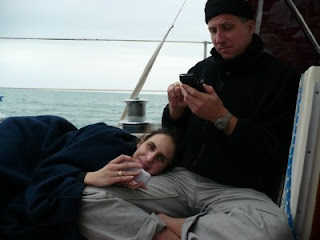 After a bit, she got bored with it and she gave the wheel back to Bruce. Mark and Laura both have the new i-phone. His black for "groom"... hers white for "bride". I know, I know... they're sickly sweet! Since they got the two phones they are constantly on the internet. I did get to see some of the wedding stuff she has planned. They're so goofy. Imagine it... out on a sailboat in the bay, drifting slowly along more out of habit than from actual wind... and these two are cruising... THE NET!