We sent Mark and Laura off to get ready for the annual MORF party which was set for Saturday night at 7:00 pm. This is the reason we brought the boat to CC. The party was at Joe's Crab Shack. Bruce and I switched out the headsail and put the boat back in order and ran home to shower and change. We just made it back to the marina in time for the party. 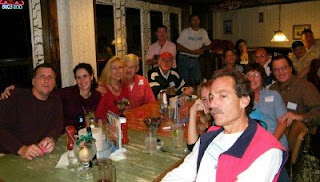 The party room filled up fast with familiar faces. Our sailing community is small and close knit. I've only met one sailor here that I really didn't like. His name was Barry Brown. He was rude, condescinding, and a sailing "elitist". He did it forever one day when Bruce and I were walking down the dock. Barry noticed that we had a new bimini on our boat. This thing cost a lot of money and we were happy and proud of it. "Yes we do! Isn't it great!?" Barry said "yeah that'll make your boat go faster...". I never got over that and it kept piling up. This year, Barry passed away. His obituary spoke of a very different man than the one we knew. Now I'm not changing my opinion of the man, I try not to be a hypocrite... but I really wish we knew the Barry in the obit. Sailing in CC would have been better for it. Anyway, they renamed the Competition Cup in his memory. This is the award given yearly to the boat that wins the most points overall. Barry lived to win this award. Now, it will be his forever.
The party was so great this year. All of our old bunch was there, including Karl and Jan. They've been off cruising for nearly a year and have recently come back for a 6 month stay. Saturday night was the first we've seen of them and it was a treat. We got a chance to hear some of their stories about cruising. We had a full table of friends just like old times before they left.
Cute shoes won second place for participation. This means that Steve has taken his boat out to participate in the second most Wednesday night races. It's doesn't say much for the other racers in town as Steve didn't even start until after mid-year. We've got to get those people out sailing. 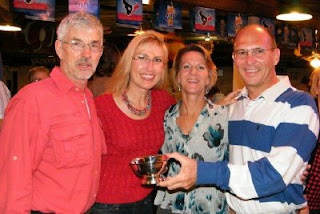